Accessibility links
Xerox CEO: 'If You Don't Transform, You're Stuck' Founded in 1906, Xerox is one of America's most venerable companies. But the corporate giant has struggled in the digital age. CEO Ursula Burns, the first African-American woman to run a Fortune 500 company, is working to transform a company known for photocopy machines into a services icon. 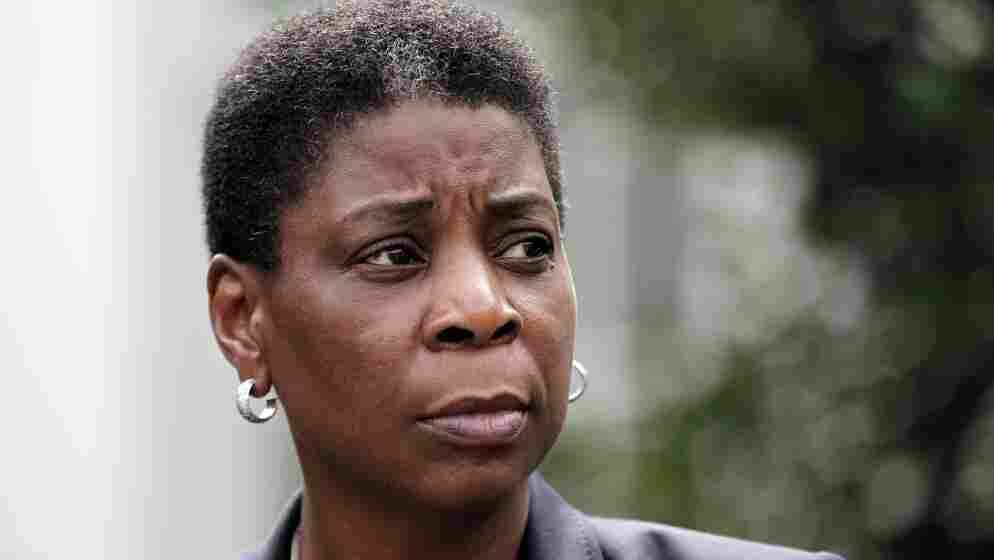 Xerox CEO Ursula Burns began her career with the company in 1980 as a summer intern. In 2009, she became the first African-American woman to lead a Fortune 500 company. J. Scott Applewhite/AP hide caption

Xerox is one of America's most venerable companies. Founded in 1906, its name is virtually synonymous with "photocopy."

But in recent years, in an era of email and paperless offices, Xerox has struggled to stay relevant. Today, the company is trying to turn itself around and thrive in the digital age.

Leading Xerox through that transformation is Ursula Burns, a woman who has undergone tremendous change in her own life. Burns, 53, grew up in New York City's Lower East Side, an area she has described as a tough, drug-infested ghetto.

Burns began her career at Xerox in 1980 as an intern, after completing her Master's degree in mechanical engineering. She rose through the ranks to become the company's CEO — and the first African-American woman to lead a Fortune 500 company — at a time when less than 20 percent of corporate executives are female.

Burns talks with NPR's Renee Montagne about her journey from young engineer to CEO and her efforts to transform Xerox from a manufacturing icon into a thriving international services provider.

On why she has stayed with Xerox

"I didn't think, when I walked into the company, that I would be the CEO. I did expect to be successful, though. My mother raised us to think that if we worked hard, and if we put our end of the bargain in, it would work out OK for us. And I loved the place, they seemed to like me well enough, so a marriage was formed, and I've been there ever since. ...

"What I found there was an organization that accepted me for whom I was. They actually tried to round out some edges — which I think they did a reasonably good job at — without taking away the person that they hired."

On being young, black and female in corporate America

"Race and gender definitely came up occasionally in my life at work. But the bigger challenge that I had was age. I took roles earlier in my career than people expected, and so a lot of what I got was, 'Do you actually know enough to do this?' I was always a little bit younger and I got a lot of pushback for that. I think that was a big issue for me. ...

"As you move up — as you engage more and more people in the company and take on broader roles — this idea of quote-unquote "looking the part" becomes more and more of a challenge when you don't look the part.

"But there's nothing I can do, or wanted to do, about being a black female — I kind of like both of those things. So at the end of the day, the people who were around me had to do a little bit more adjusting than I did. ... And if you're faced with people who can't deal with it, there's not much I can do.

"Now, I got beat up for doing bad things or not moving fast enough, but never for trying stuff or for being a woman or for being black. It's just not a part of the way that we operated."

On the growing number of services Xerox provides

"A lot of people enjoy the benefit of E-ZPass, which means when you go through a toll, you don't have to stop and put cash into those things. ... Xerox manages the infrastructure of E-ZPass for a large number of states. ... So when you say E-ZPass, or get some bill from E-ZPass, or call and ask a question, you're talking to a Xerox person. We manage that infrastructure.

"If you get a ticket for running a red light in certain states ... Xerox actually provides the installation and management of the camera systems [and] the back-office system to assure that we're sending the ticket to the right place. ...

"If you live in the state of California and you have anything to do with Medicaid, the entire communication — the statement of benefits and the locking together of the services provided and the payments that you got — is done by Xerox Corporation."

On the imperative to transform

"When we started, our mission was to automate work processes. We became so good at this one ... business process that we didn't think about all the rest of them that were out there. So as the market started to change, and as customers said 'Can you do more for us?' they also said, 'You're already engaged here — why don't you get engaged with the ... benefit forms? Why don't you generate the things?' ...

"So I think [the shift to providing services] was a really easy transformation ... because we didn't have to go from making food to making airplanes. It was pretty close — it was in our neighborhood."

On an international corporation's responsibility to American workers

Ursula Burns To Succeed Mulcahy As Xerox CEO May 22, 2009