Accessibility links
Fight Over Flame Retardants In Furniture Heats Up Nearly every sofa and armchair sold in the U.S. is treated with flame-retardant chemicals thanks to an obscure California law. Some experts say the chemicals do little to prevent fires; others worry that they might cause health problems. The industry has opposed attempts to change the law. 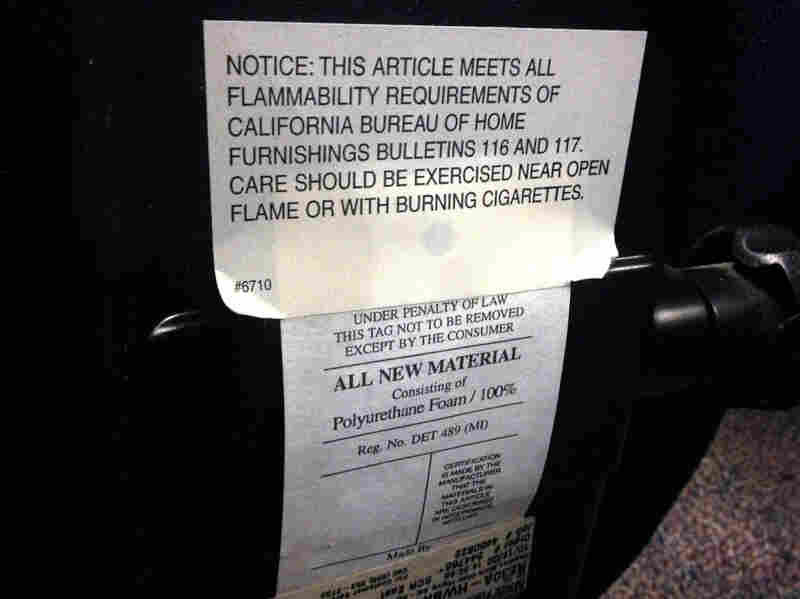 More than 80 percent of furniture sold in the U.S. is treated with flame-retardant chemicals. Steve Mullis/NPR hide caption 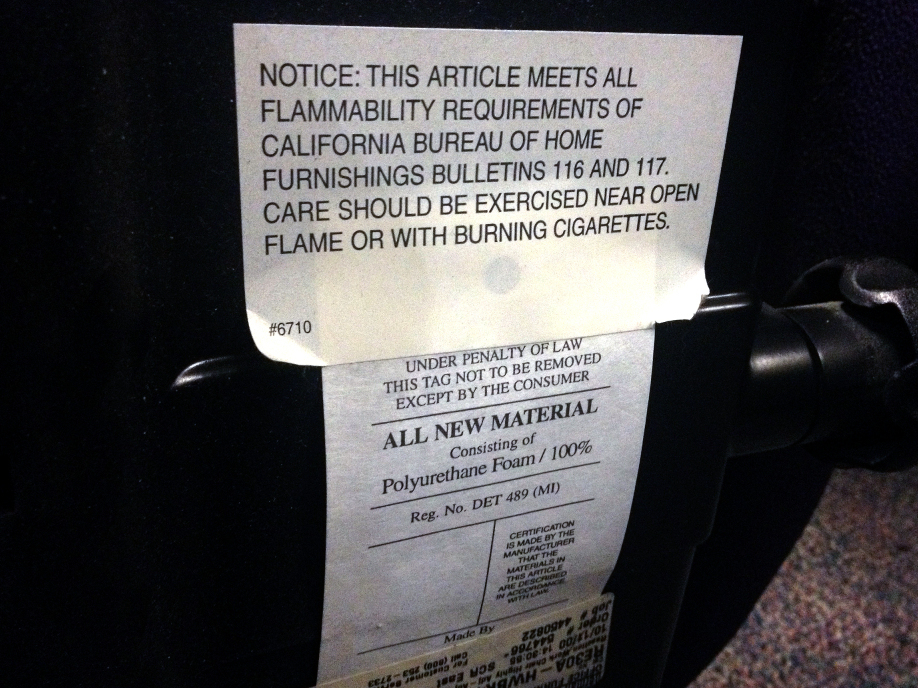 More than 80 percent of furniture sold in the U.S. is treated with flame-retardant chemicals.

If you pick up a cushion from any sofa or piece of furniture that has foam, you're likely to find a small white tag that reads: "This article meets all flammability requirements of California Bureau of Home Furnishings technical bulletin 117."

The law, referred to as TB 117, was passed in California in 1975. It says that the foam inside upholstered furniture must be able to resist a flame, such as from a cigarette lighter or a candle. Rather than make different furniture just for California, big furniture makers adhere to those standards in all 50 states and even Canada.

Some scientists and lawmakers are now starting to think this policy, designed to make us safer, might actually have the opposite effect.

A Law Backed By Industry

There's really only one way to take foam and make it flame retardant: with chemicals. Not trace amounts, either. You have to put as much as 2 pounds of flame-retardant chemicals into the foam of each sofa.

According to the American Home Furnishings Alliance, more than 80 percent of furniture sold in the U.S. contains foam treated with flame retardant chemicals.

The problem, chemists say, is that the chemicals don't just stay inside the sofas — they turn up in household dust and in human blood and breast milk. Some of these chemicals cause cancer in lab animals, and studies suggest connections between some of the chemicals and abnormal brain development in humans.

Usually, once the fire gets to the foam, the sofa's going to burn. It'll burn just as well with the fire retardant as without it.

Over the years, the most worrisome chemicals have been phased out, but they're still present in older furniture. Meanwhile, new chemicals come online and scientists scramble to test them. For these reasons, California lawmakers have tried five times to change this law.

Leno's recent bill had the support of furniture makers, firefighter groups and doctors. All of them wanted the chemicals out of furniture, but the bill died in committee. Every lawmaker who voted against it had received campaign contributions from the chemical industry.

Leno says it's the same every time one of these bills comes up. He goes from office to office, trying to drum up support from fellow lawmakers.

"In the waiting room of the office I'm leaving is a lobbyist for the chemical industry. So they'll have the last word," he says.

Do The Chemicals Work?

Last year, a burn doctor from Seattle named David Heimbach was a star witness hired by the chemical industry to testify to California lawmakers. He described a 7-week-old girl he treated who was burned in a fire started by a candle that ignited a chemical-free pillow.

It turned out that there was no 7-week-old burn victim and no candle fire. After a Chicago Tribune investigation, Heimbach admitted he made up the story.

"What we found is the addition of the fire retardants really didn't reduce fires significantly, or at least we couldn't tell that it reduced it at all," says Donald Lucas, a flammability scientist at Lawrence Berkeley National Lab.

Lucas says the reason flame retardants don't stop fires is that fires don't start inside the sofa — they start on the surface of the sofa, on the fabric. And the law says nothing about the fabric, just the foam.

"Usually, once the fire gets to the foam, the sofa's going to burn," he says. "It'll burn just as well with the fire retardant as without it."

Lucas points out that today, there are better ways to make furniture fire resistant using special fabrics or fire barriers between the fabric and the foam. After four decades of the existing law, California regulators say they're looking into it.