Accessibility links
Happy Feet: Tips For Healthier Running Have you thought about switching to barefoot running? New York Times exercise columnist Gretchen Reynolds did — and promptly injured herself. She details what she did wrong — and how to keep your own feet healthy — in her new book, The First 20 Minutes. 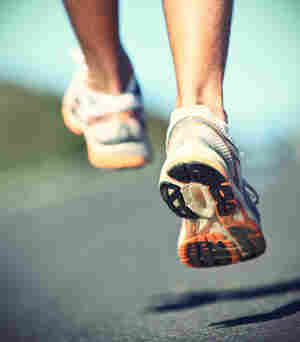 After hearing a lot about barefoot running, New York Times Phys Ed columnist Gretchen Reynolds decided to try it out for herself. An amateur runner for several decades, Reynolds says she thought the transition would be easy. But almost immediately, she got injured.

"I hurt my illiotibial band on the outside of the knee, and I also hurt my Achilles tendon, which I had never done before," she tells Fresh Air's Terry Gross. "A lot of people are trying barefoot running without preparation and without the knowledge of what happens when you take off your running shoes, and I was one [of them]. And what often happens is exactly what happened to me, which is that you almost immediately hurt your Achilles tendon."

That's because many people ramp up their barefoot running programs too quickly, which doesn't allow the muscles in the legs and feet time to catch up, she says. 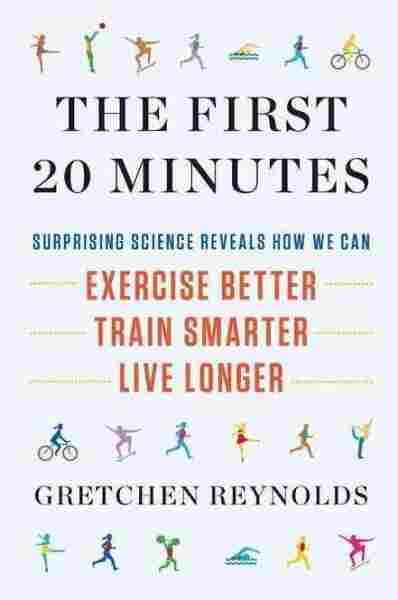 "Every muscle in your leg, every tendon, every ligament is used to how you land with shoes on," says Reynolds. "If you've been doing that for 40 years, which many of us have ... then your body is very used to that movement to how you hit the ground with shoes on. ... You take off your shoes, and even if in theory it's healthier, you're not used to it."

Reynolds, who still runs regularly, is the author of The First 20 Minutes, which details the latest scientific research on running, stretching and hydration techniques. Her advice to potential barefoot runners? Ramp up slowly — and very carefully.

"The single biggest risk factor for a running injury is a prior running injury," she says. "So if you've hurt yourself in the past, you probably need to change how you run. You may need to warm up a little more. Some people like to switch to trails. There's not actually much science showing that the surface matters, but it definitely matters how many miles you do."

Among Reynolds' other findings:

Running Will Not Ruin Your Healthy Knees: There's a strong myth that running can ruin your knees, says Reynolds, but that's not actually true if your knees start out injury-free. "The science actually shows that if you have a healthy knee to start with, running tends to increase the amount of cartilage that you produce," she says. "Running prompts the cartilage cells, which are the shock absorbers in your knees, to divide and produce more cartilage. So in theory, running is actually healthy for your knees."

Weighing The Pros And Cons Of Heavy Running Shoes: If you've been investing in heavy running shoes with all sorts of features, you might want to rethink things, says Reynolds. "Science now suggests that [wearing those shoes] probably hurts," she says. "There are some very good studies that say that people who wear heavy motion-control shoes tend to get injured more often than people who wear any other type of shoe. It doesn't matter if they do pronate or they don't pronate. They get injured more if they wear a heavy running shoe."

A Shoe For Barefoot Runners

Do Orthotics Work? It's unclear, says Reynolds. "When they put people in custom orthotics or over-the-counter orthotics or nothing, there's very little difference in injury rates," she says. "There seems to be a pretty strong placebo effect. People who get custom-made orthotics think they're going to get less injured. Perhaps that will keep some of them from getting injured, but there's not very good science that orthotics will actually protect you from something like plantar fasciitis."

Stretching Works! Reynolds says lean against a wall, with one foot extending out behind you with your heel on the ground, and hold that position for 30 seconds. But don't do it before your run, she warns. "That would actually be counterproductive to do that before you exercise," she says. "If you're past 40, then it does become necessary to do a little bit of additional stretching, because everything does stiffen up a little."

High Heels Can Increase Your Risk For Running Injuries: Heels shorten the Achilles tendon and change how your foot orients itself to the ground. That spells trouble once the heels come off, says Reynolds. "Your foot honestly does not know how to come into contact with the ground," she says. "Women who wear high heels all the time and then walk without them walk completely differently than women who do not wear heels, and they probably increase their risk for a whole host of injuries."

Should You Take Ibuprofen Preventively Before A Workout? No, says Reynolds. "The science actually shows that ibuprofen blunts the training response," she says. "It actually makes it harder for your muscles to adjust after exercise. So you actually get a little less muscle healing and less muscle adaptation. So if you take ibuprofen to keep yourself from getting sore, what you are ultimately doing is increasing the chances you will get sore because your muscles are not as strong and not as well adapted."

Read an excerpt of The First 20 Minutes