Accessibility links
Old Ways Disappearing In The New Mongolia With desertification, drought and a booming mining industry, Mongolians are leaving the traditional life of herding. Herdsman Bat-Erdene Badam says he will be the last in his family to tend livestock. His children are trading in their nomadic lives for more stable, often urban jobs.

Mongolia is a country of tremendous contrasts. Consider this: Two out of every five Mongolians make their living herding goats, sheep and camels.

But last year — according to World Bank estimates — Mongolia's economy grew faster than any other on the planet, driven by a mining boom.

The Central Asian nation seems to be racing from a nomadic culture to an industrial one practically overnight. To appreciate how this transition — and its inevitable tensions — play out in the lives of ordinary Mongolians, spend a few hours with Bat-Erdene Badam and his family. 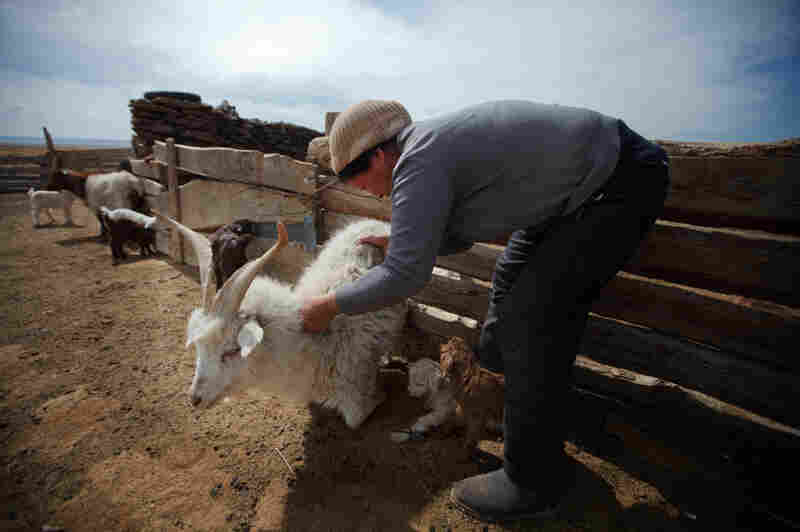 Bat-Erdene Badam's family raises sheep, goats and camels in the South Gobi region of Mongolia. But his three children have no interest in continuing the family business. John W. Poole/NPR hide caption

Bat-Erdene, 47, is a lifelong herder who lives in a ger, or a yurt, in the middle of the Gobi. He spends each spring combing cashmere from his goats. On a recent day, a goat lies stretched out on its side in a ger, its horns tethered to the ground. A fellow herder rakes off tufts of white cashmere with what looks like a gardening tool as the goat yelps in fear.

Bat-Erdene sells the cashmere for about $20 a pound. Combings from his 300 goats should bring in more than $6,000 this year.

That's decent money in the middle of the Gobi, a mix of moonscape, mountain and increasingly arid grassland in southern Mongolia. But Bat-Erdene's three children have no interest in the family business.

"Young people stopped herding animals," says Bat-Erdene, leaning against the wooden gate of a corral filled with goats. "There are lots of employment opportunities for them in the mining business. Therefore, I could probably say that the generation of herders is ending with me."

A Mix Of Old And Modern

Bat-Erdene heats his felt tent with an iron stove. Rugs cover the dirt floor, and the walls of his corral are constructed of bricks made from goat and sheep droppings.

But he also rides a motorcycle, uses a cell phone and watches limited satellite TV on a small black-and-white set powered by solar panels.

On a recent day, the romantic comedy How to Lose a Guy in 10 Days plays silently in the background.

Bat-Erdene lives with his wife and a high-school-age son. Their daughter attends college in Mongolia's capital, Ulan Bator, about 300 miles away, and their other son, Uuganbaatar, drives a dump truck at a coal mine.

"Two or three years ago, my elder son used to help us out," says Bat-Erdene, who wears a gray cap and a brown sweater that zips up the front. "Now, he's really tired of being a herder, because we depend too much on the weather and climatic conditions."

Rising temperatures are drying out Mongolia's grasslands, while severe weather is taking a toll as well. In recent years, heavy snow and drought killed more than 400 head of the family's livestock, more than half of their herd at the time. Bat-Erdene says for a new generation, herding seems too unstable.

"When someone has a regular job, it doesn't matter if there's severe weather or not," he says. "He can do his work, no matter what."

A Blessing And Curse

Bat-Erdene's son Uuganbaatar began working at the coal mine about a year ago. He's 22 and, like many young Mongolians, painfully shy.

In an interview outside the gates of the mine, he studies a water bottle he's holding and kicks the ground with his black Air Jordans. The mine is completely isolated in the desert, but Uuganbaatar says he has more friends there and there's more to do.

"I watch TV," he says. "There's a recreation room with ping-pong and pool and there's a computer room." 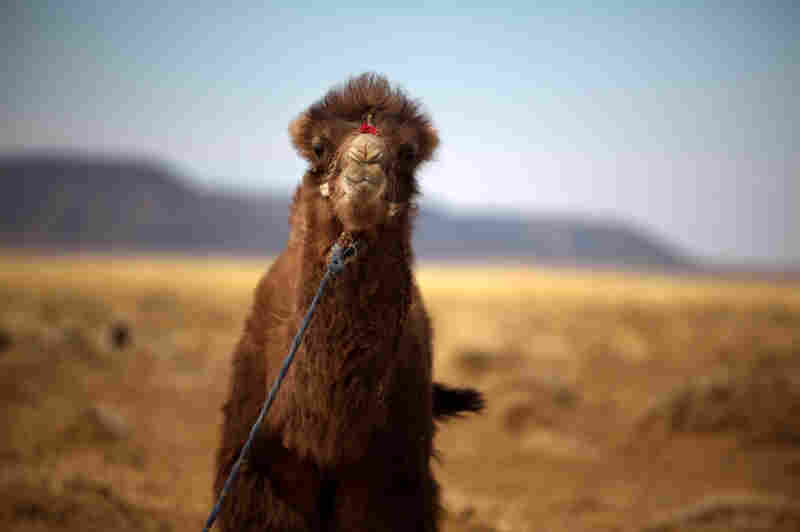 A baby Bactrian camel is tied up at the edge of Bat-Erdene's small farmstead. Bactrian camels, like all Mongolian mammals, have thick fur to withstand temperatures of 40 degrees below zero in winter. Even in spring, temperatures regularly dip below freezing. John W. Poole/NPR hide caption

The camp TV is a big, flat-screen. Uuganbaatar follows sports on the Internet, especially the NBA. His favorite team is the Orlando Magic with its towering center, Dwight Howard.

Mining has been good for Uuganbaatar. He makes $500 a month — in a country where the annual per capita GDP is about $2,500 — and Mongolia's mineral reserves are so vast, he could probably spend the next several decades working them.

But his father sees mining as a threat. Mines need water to process minerals and the mine that employs his son plans to tap into an aquifer beneath the family's grazing land.

The local government had designated the area as protected, but Mongolia's central government has an ownership stake in the mine, and last year, it decided otherwise.

Resignation About The Future

"It was a very hard hit for us, because it is only going to speed up desertification and we can see how desertification is already moving at a very high speed," he said, surrounded by parched clumps of grass.

Rising temperatures and decreasing annual rainfall has led to more sandstorms, and surface water sources such as rivers and lakes are drying out a rapid rate, according to the Mongolian government and nongovernmental organizations. Mongolian officials say that about 70 percent of Mongolia is now suffering from desertification.

Officials at the mine say it will draw from a deep aquifer and won't affect herders' wells, but Bat-Erdene doesn't believe it.

"Animals will be thirsty, people will be thirsty, it will be very hard," he says. Bat-Erdene supports his son's new career in what is becoming Mongolia's national industry. As to the dispute over water, he doesn't bring it up.

"It wouldn't change anything," Bat-Erdene says, "so we don't talk too much about it."