Accessibility links
Movie Review - 'Men In Black 3' - A Cartoonish Blast To The Past Will Smith and Tommy Lee Jones return in the second Men In Black sequel as J and K, two of the sable-clad agents monitoring the Earth's secret alien population. Critic Scott Tobias says a time-travel plot and a strong performance from Josh Brolin as a young Agent K give the franchise a lift.

'Men In Black 3': A Cartoonish Blast To The Past

'Men In Black 3': A Cartoonish Blast To The Past 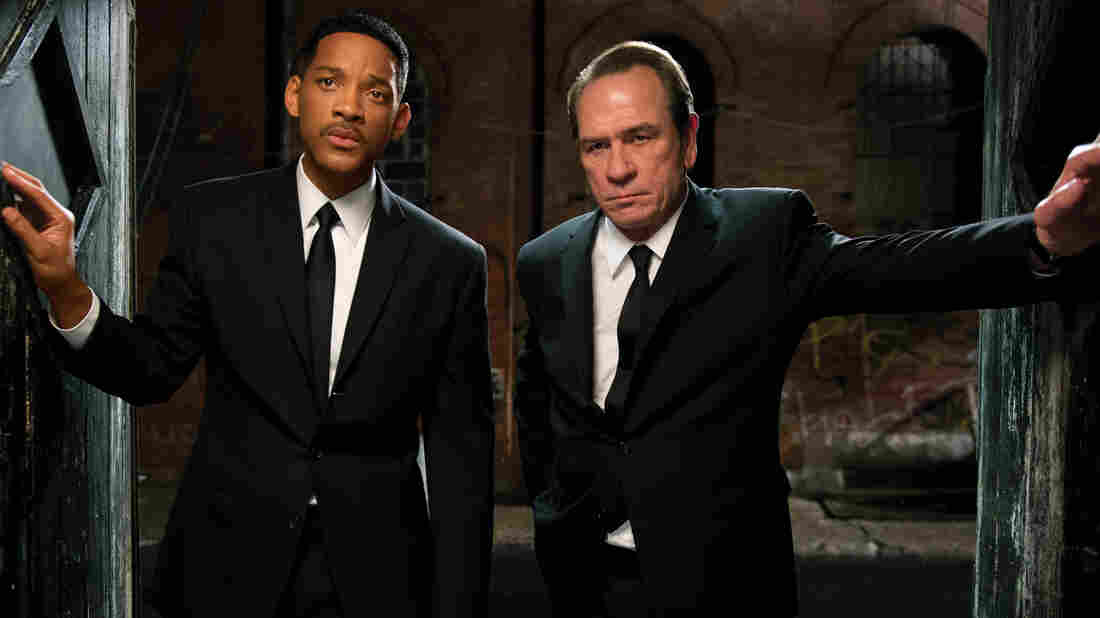 From the Department of Inessentiality, Summer Division, comes Men in Black 3, one of those franchises that lost all creative life in the first sequel but keep drawing breath anyway, thanks to an iron lung powered by a half-billion dollars in worldwide grosses.

The concept of a secret agency devoted to controlling Earth's undercover alien population can only seem novel once, and the Odd Couple dynamic between Will Smith's chatty, effervescent newcomer and Tommy Lee Jones' irascible veteran has a shelf life, too. To merely rinse and repeat for the third entry, adding only new creatures and the obligatory 3-D effects, would have buried it deeper into the ground.

Introducing time travel to a series that has never raised that possibility sounds like a desperate ploy, drafting off Back to the Future much like young Marty McFly drafted off cars on his skateboard. Perhaps it wouldn't seem like a stretch for such a high-tech agency to disrupt the space-time continuum, but taking the franchise out of its natural habitat is what happened when Fonzie jumped the shark. Perhaps that's why it took a full decade to make the second Men in Black sequel.

And yet director Barry Sonnenfeld, working from a script by Etan Cohen (Tropic Thunder), gets just enough juice out of the time-travel idea to give Men in Black 3 a lift. A plot that has Smith's Agent J going back to 1969 to save his partner — and the world — allows for ample opportunities to riff on American history and introduces an uncanny Josh Brolin as Jones' younger self, which twists a tired buddy-movie partnership in subtle and often clever new directions. 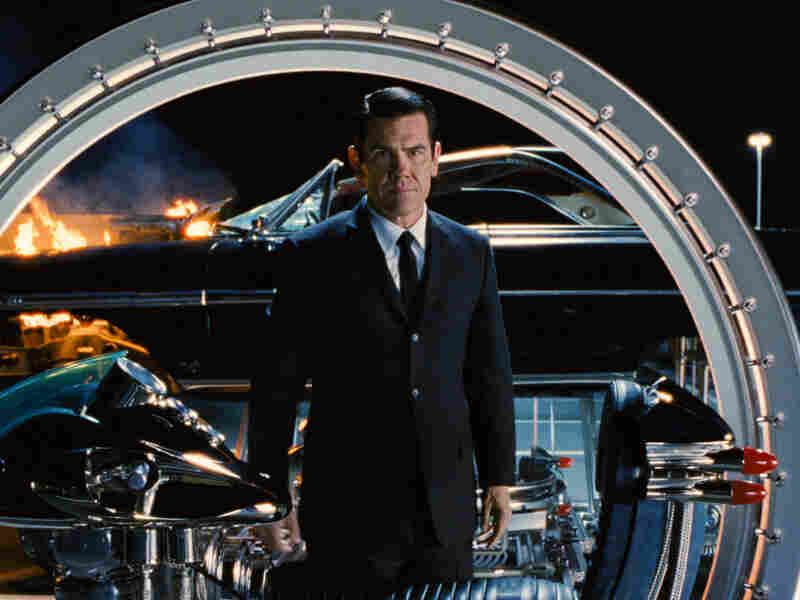 Josh Brolin (No Country for Old Men) plays young Agent K, the target in 1969 of an attack by a time-traveling alien that threatens to change the future. Sony Pictures hide caption 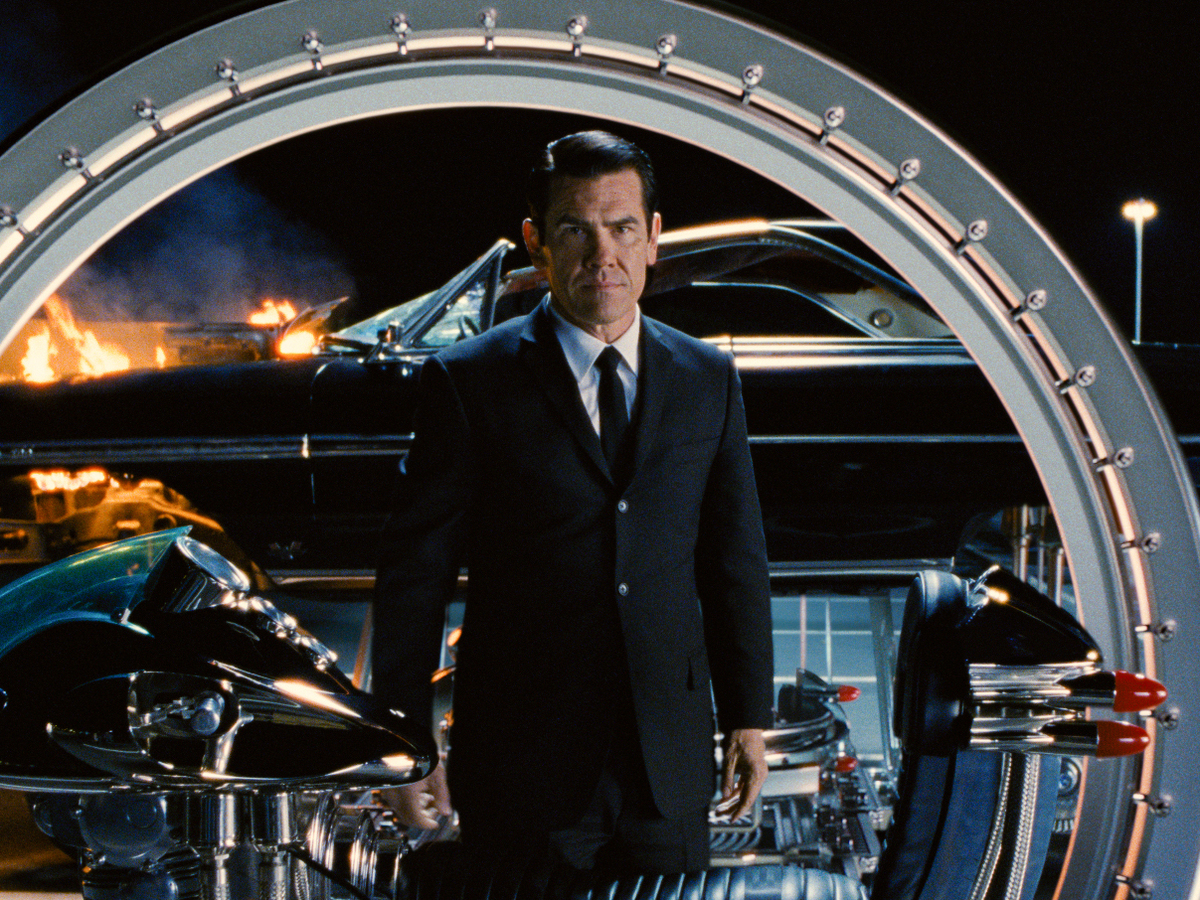 Josh Brolin (No Country for Old Men) plays young Agent K, the target in 1969 of an attack by a time-traveling alien that threatens to change the future.

As the film opens, a dangerous new threat emerges in "Boris the Animal," a creature so deadly that he has spent the past 40 years chained up in a prison on the moon. The man who put him there? None other than Jones' Agent K, who shot off Boris' arm in the process.

When Boris escapes from prison, steals a time-travel device and goes back to July 16, 1969, to kill K in a showdown at Cape Canaveral, J sets his own device 24 hours earlier in an attempt to warn his future partner and avoid a full-on alien invasion.

Though there are some callbacks to the first two movies, Men in Black 3 doesn't expect viewers to remember some complicated mythology — in that respect, it serves as its own memory-wiping "neuralizer" — and the streamlined plot is unusual and refreshing for a time-travel movie. (Just don't think about the what-ifs for too long.)

Sonnenfeld's best movies function like elaborate Rube Goldberg contraptions, with visual gags popping out on a precise calibration of gears and springs, and Cohen's script, however derivative, is a stable apparatus.

As soon as Smith makes a leap in time, zipping past dinosaurs and plunging through a World War II ticker-tape parade, Sonnenfeld turns Men in Black 3 into an alternate history that operates somewhere between a Warner Brothers cartoon and the cantina scene in Star Wars.

Within the 24-hour window, the film zips from Andy Warhol's Factory to the Apollo 11 launch while keeping up a lively banter between Smith and Brolin's K, who hasn't quite calcified into the mirthless grouch that he'll have become 40 years later.

Though other newcomers like Flight of the Conchords co-star Jemaine Clement (as Boris) and A Serious Man's Michael Stuhlbarg (as an alien who can see possible futures) make strong impressions, Men in Black 3 belongs to Brolin, whose Tommy Lee Jones impersonation is so scarily precise that it often sounds like Jones is overdubbing him.

But it's not just skillful caricature, either: When the film gets sentimental about J and K's friendship, Brolin finds the right emotional register as a young agent who isn't quite set in his ways. In a franchise that could also be too set in its ways, his flexibility makes all the difference.