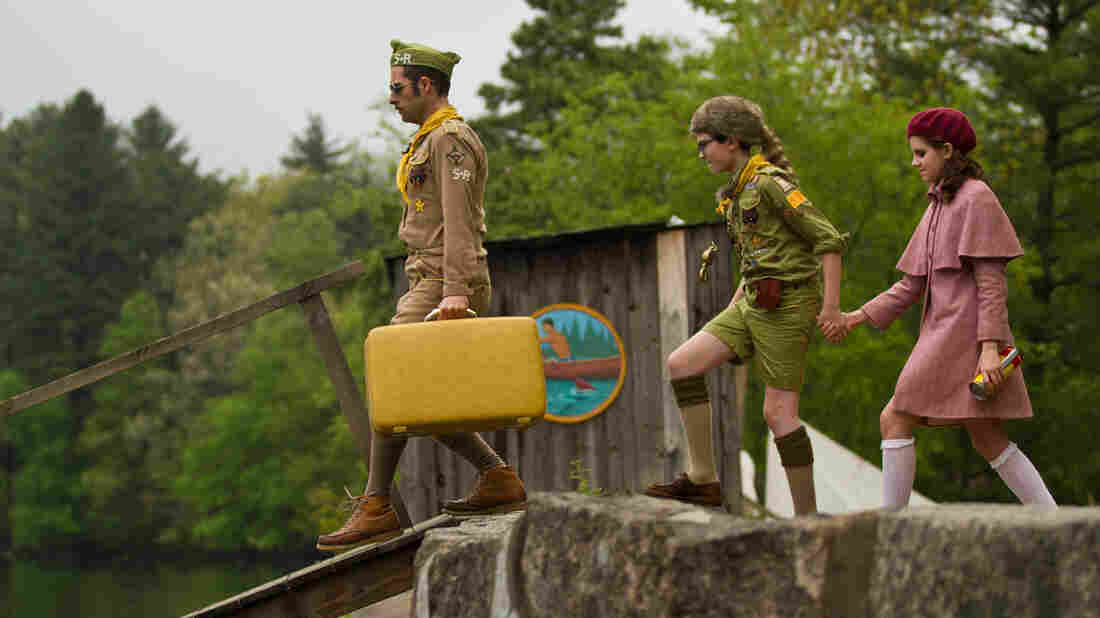 Cousin Ben (Jason Schwartzman) leads Sam (Jared Gilman) and Suzy (Kara Hayward) down a dock in Moonrise Kingdom. The film, set in 1965, follows Sam and Suzy when they elope together into the wilderness of the fictitious New Penzance island. Niko Tavernise/Focus Features hide caption

In the first few minutes of Wes Anderson's Moonrise Kingdom, the camera tracks horizontally and vertically along the cross-sectioned rooms of a house. It's one of the writer-director's signature visual tics, one that, like many of his techniques, announces his art as something artificial. Anderson isn't breaking the fourth wall, he's eliminating it, literally: all these rooms have only three, in order that we might glimpse the carefully choreographed ballet he has arranged for us inside.

That dance starts in the Bishop household, a family living on the fictitious New England island of New Penzance in the 1960s. (Anderson's usual fetishization of that decade has finally led him to set a movie there.) The younger kids play on braided rugs, listening to Benjamin Britten's "Young Person's Guide to the Orchestra" on a toy record player, as mom and dad go about their evening routine. The eldest daughter, Suzy (Kara Hayward), obsessively scans the horizon with binoculars.

When the setting shifts, it's to an encampment of "khaki scouts," a troop under the command of the strict but earnest Scout Master Randy Ward (Edward Norton). He's about to find that one of his young charges, 12-year-old Sam (Jared Gilman), has gone AWOL. Sam and Suzy, in the grips of young, on-the-verge-of-pubescence love, have plans to run away together.

Even once Anderson's camera leaves the Bishops' house for the camp, his shots retain the same tracking motions. The walls are gone entirely once in the outdoor camp, but the feeling that this is still a kind of dollhouse remains. And if a dollhouse can be the setting for endless hours of childhood storytelling, Moonrise Kingdom — and really almost any Anderson film — is that childhood toy blown up to life size, to tell stories played out by living, breathing human actors. 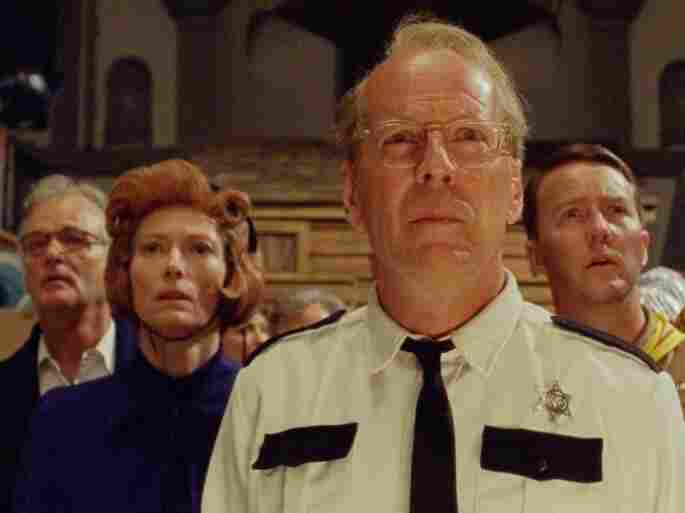 Bill Murray, Tilda Swinton, Bruce Willis and Edward Norton play some of the adults who search for Sam and Suzy as a violent storm approaches their island. Focus Features hide caption 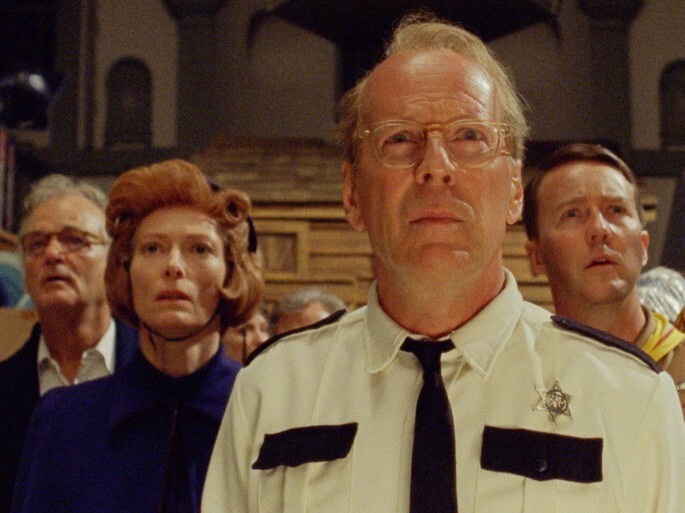 Bill Murray, Tilda Swinton, Bruce Willis and Edward Norton play some of the adults who search for Sam and Suzy as a violent storm approaches their island.

Yet even as dolls made flesh, they and their surroundings still retain the manufactured perfection of miniatures: Colors are too bright, too perfectly coordinated. Actors speak in self-aware deadpan, the adults with a stilted affectation, the children echoing the endearing amateurism of '60s Peanuts specials. Anderson's camera setups — the windows through which we see his world — are meticulously framed, with attention-grabbing unnatural symmetries.

Yet for all the self-conscious distancing techniques and quirky humor Anderson employs, when he's at his best, his work can be surprising in its disarming emotion. The surplus of style is the distraction he deploys while he sneaks in through our hearts' back door. That's exactly what he accomplishes with Moonrise Kingdom.

The surplus of style is the distraction [Anderson] deploys while he sneaks in through our hearts' back door.

Anderson, with co-writer Roman Coppola, constructs a heartfelt fantasy of young love, an adult re-imagining of the moment in adolescence when that bond is uncomplicated and pure, perfect and forever. Sam, expert khaki scout, is ready to take on the world and the wilderness, pitching perfect pup tents and lovingly preparing franks and beans over the campfire for the object of his affection — who has run away armed only with a suitcase full of library books, her record player and her favorite Francoise Hardy record.

For contrast, he sets Suzy and Sam's story of love on the run against the less idealized backdrop of the adults searching the island for them. Relationships among them are as stormy as the hurricane bearing down on New Penzance: Grown-up love is complicated and compromised, flawed and fleeting. Sam's foster parents have abandoned him. Suzy's parents (Frances McDormand and Anderson regular Bill Murray) can barely stand one another, and her mother is having an affair with the island's lone, sad police officer (Bruce Willis, at his subtly comic best).

Rushing into adulthood themselves, Sam and Suzy begin to experience the first imperfections in their own relationship once the hermetic seal of youthful idealism is broken. One early conflict ranks among the most heartbreaking moments in any of Anderson's films, as Suzy, desperate to be rid of her own broken family, romanticizes Sam's orphanhood. "I love you," he tells her, the pain of his loneliness nearly catching up to his usually businesslike demeanor, "but you don't know what you're talking about."

This is a director who is an undeniable expert at visual precision, and Moonrise Kingdom, shot in grainy, dreamy super 16mm, is as beautiful to look at as any of his films. But it's easy to overlook how in moments like these — quick but meaningful bits of dialogue, or the awkward, innocent joyfulness of Suzy and Sam dancing in their underwear on the beach — Anderson has the ability to control our emotions just as expertly as his camera. (Recommended)