Accessibility links
Obama Seeks To Gain Support Among Military Voters Long before Obama gave a commencement speech to Air Force cadets Wednesday, his campaign was focusing attention on his record with military families and veterans — a key voting group that could make the difference in swing states like Virginia, North Carolina and Florida. 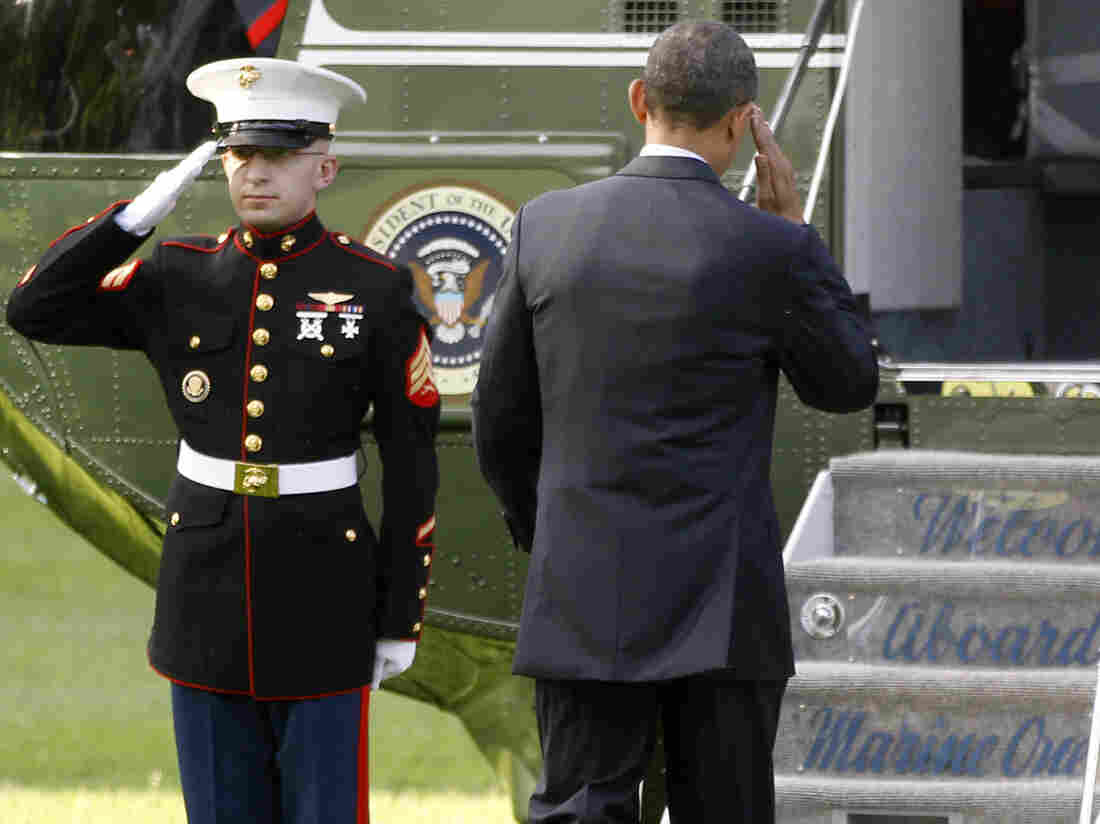 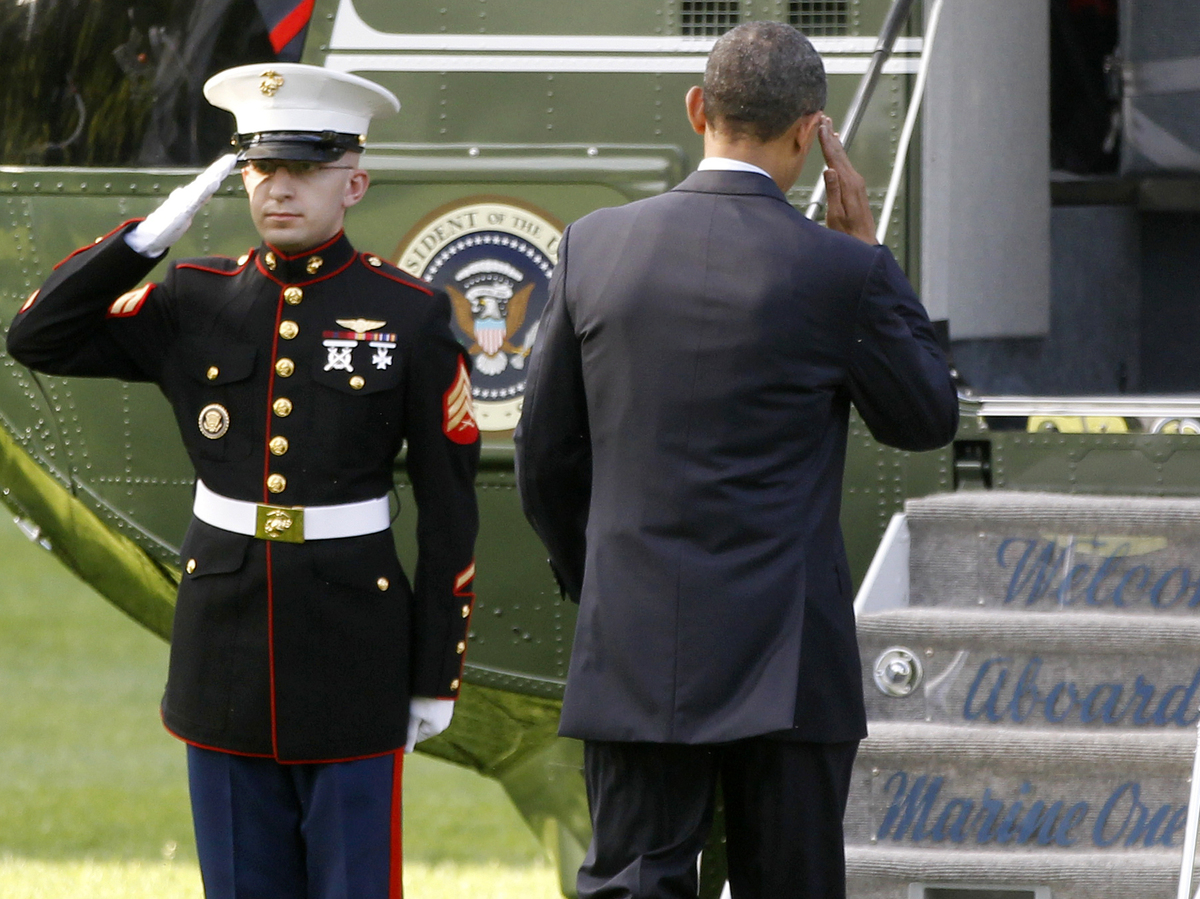 Historically, the veteran and military vote has gone Republican. In 2008, for example, while losing the presidency, John McCain — a war hero — won 55 percent of this vote.

This year, the Obama campaign thinks it can close the gap.

For one thing, neither candidate is a veteran. And the campaign is hoping to capitalize on a generational change in the military. Four years ago, although he lost the veteran vote overall, President Obama won among vets under age 60.

Long before Obama's Wednesday commencement speech to Air Force cadets at the Air Force Academy in Colorado Springs, his campaign was focusing attention on veterans, active military and their families.

On Wednesday, it rolled out a new ad aimed squarely at veterans and military families. In the ad, the president says, "The sacrifices that our troops have made have been incredible. It's because of what they've done that we've been able to go after al-Qaida and kill bin Laden. And when they come home, we have a sacred trust to make sure we are doing everything we can to heal all of their wounds."

During his presidency, Obama has supported increased funding for the Department of Veterans Affairs, a revamped GI Bill and a job training program for returning vets.

First lady Michelle Obama began a program of her own to help military families.

Last month, she visited the Naval Air Station in Jacksonville, Fla., where she spoke to a group of young women from military families. "When we talk about how our men and women in uniform sacrifice so much and serve this country so bravely, we're not just talking about your parents. We are not. We are talking about all of you," she said.

While polls suggest the Obamas' message is resonating with military families — including wives and children — it's still a tough sell with many veterans.

I'm certain that veterans are more so thinking about jobs, employment, security. ... If you have a veteran who's able to go to work every day and make a living to take care of his family, that, right there in itself, supersedes the medical, the Medicaid, the different insurances that are out there because the veteran feels that, 'OK. Now, I'm back, stable.'

In Florida, veterans are an important group. There are more than 1.6 million of them. Many live in the Jacksonville area, which is also home to two Navy installations and American Legion Post 137, just a few miles from the air station.

One veteran at the American Legion Post, Tony Romano, is skeptical of Obama's leadership and his attention to veterans. "I believe that all the things that the president [is] doing now is just to get re-elected. And I believe that with my whole heart," said Romano.

In another part of Jacksonville, at Disabled American Veterans Chapter 1, James Wilson is a younger vet who likes the president's health care plan and his focus on improving veterans' benefits.

But especially for returning vets, Wilson says, the No. 1 issue is the economy.

"I'm certain that veterans are more so thinking about jobs, employment, security. ... If you have a veteran who's able to go to work every day and make a living to take care of his family, that, right there in itself, supersedes the medical, the Medicaid, the different insurances that are out there because the veteran feels that, 'OK. Now, I'm back, stable,' " he said.

Returning veterans face a higher unemployment rate than the general public, and, at the same time, a huge backlog holding up claims for those who file for disability.

"Look at the unemployment rate; look at the backlog of claims. Look at the delays in getting mental health treatment. These are all of the important things that have to be delivered. Not promises, not outreach. It's actually getting in the trenches and taking care of people," said Principi.

Peter Feaver, a professor of political science at Duke University, is skeptical that the voting patterns of veterans are changing that much. Widening the lens to include military spouses and children may just mask the historic weakness Democrats have among veterans, he says.

And he has another worry — that actively campaigning for the military vote risks politicizing America's armed forces.

"That is a special institutional role that historically we've tried to preserve by keeping the military as a nonpolitical institution," says Feaver. "Yes, they may vote as private citizens. But ... it's not in their interest and it's not in the interest of the U.S. — national security more generally — for them to be viewed as an interest group."

Appealing to veterans and military families may pay off in states like Virginia, North Carolina and Florida if the vote is close. But the effort is also important for another reason.

Ads aimed at veterans and speeches like the one Obama gave Wednesday at the Air Force Academy help reinforce his trustworthiness as commander in chief.