Accessibility links
The Face That Changed The Search For Missing Kids The arrest of a man who says he killed Etan Patz highlights how much things have changed since the 6-year-old boy was abducted in 1979. Missing children were barely on the radar of law enforcement agencies back then, but are a priority all over the country today.

The Face That Changed The Search For Missing Kids

The Face That Changed The Search For Missing Kids 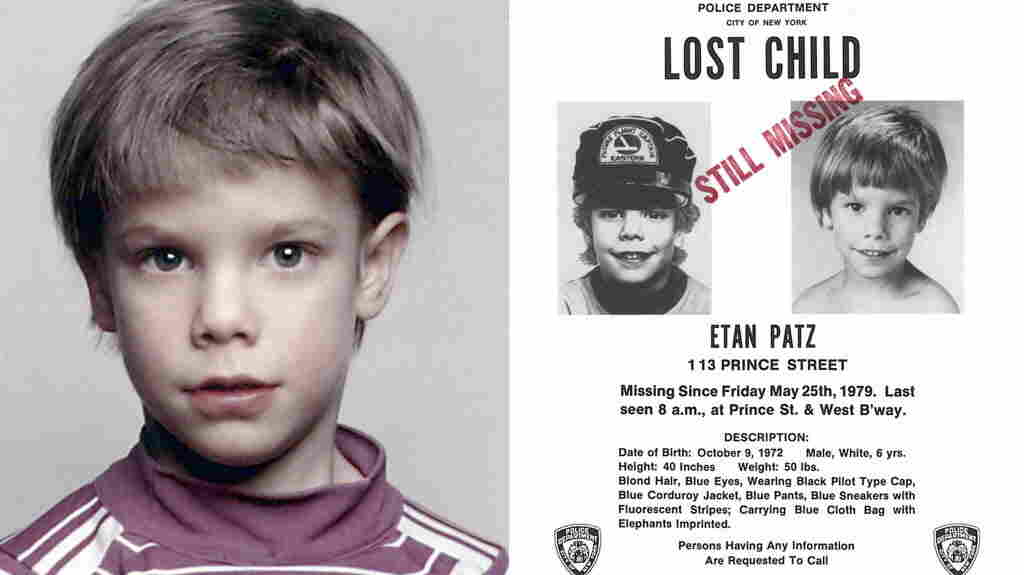 Etan Patz's disappearance haunted his family for decades. The arrest Thursday of a man who reportedly confessed to killing the 6-year-old back in 1979 may finally end their uncertainty.

There's no doubt, though, about the impact his abduction had nationally: It changed the way society and the legal system respond to missing children.

Before Etan vanished, missing kids weren't pictured on milk cartons. His case, along with others including the abduction and murder of Adam Walsh two years later, also led to hundreds of laws at the federal, state and local levels.

What Parents Can Do

Tips from experts about protecting children from abduction:

Fear doesn't work. Don't simply tell kids to avoid talking to strangers, because they'll encounter lots of them, whether it's bus drivers or parents of other children. Teach them how to interact with strangers — and also when to feel wary around people they already know. Trying to supervise kids constantly may be less effective than teaching them how to look out for themselves.

Teach your children. A generation ago, law enforcement told children to follow orders from threatening adults. Today, their advice is to raise a fuss to avoid getting in a car. The National Center for Missing and Exploited Children recently honored a Georgia girl who at age 7 kicked and screamed when a stranger tried to take her from a store. (He was caught a few miles away.)

Keep lines of communication open. If children say they're uncomfortable around an adult or teenager, take them seriously. And, even if it's uncomfortable, teach your children about sex and private parts. "Kids who know the names of body parts are less likely to be victimized," says Patty Wetterling of the Minnesota Department of Health. "It's what you don't talk about that scares kids the most."

Follow them online. The distinction between strangers and nonstrangers online can be cloudy for children, so teach them to only trust people online whom they know offline. And keep up with their online lives.

Actions that are taken for granted today — including Amber Alerts and coordination between law enforcement agencies from different jurisdictions — didn't exist 30 years ago.

"America has fundamentally changed the way it searches for missing children," says Ernie Allen, president and co-founder of the National Center for Missing and Exploited Children. "Much of the legacy of Etan Patz is that more children come home safely today than at any time in American history."

In the 1970s, virtually every police department in the country required parents to wait for a certain period of time — 24, 48 or 72 hours — before they could even file a missing-persons report.

Not anymore. Today, law enforcement agencies are not only able but expected — and often required by statute — to respond much faster.

"Those first few hours are critical," says Patty Wetterling, whose son Jacob was kidnapped at age 11 in 1989 in St. Joseph, Minn. "Washington state put out a homicide study that told us, of all the children who are kidnapped and murdered, most are killed within the first three hours."

Today, police generally have to take a missing-persons report immediately, even from people outside their jurisdiction, and are required to send the information within two hours to the FBI's National Crime Information Center.

In the Patz case, he adds, "they literally couldn't have communicated outside the city of New York, beyond the media."

Tansey's unit is a rarity: a specific division of the state police that is required by statute. The unit decides when to issue Amber Alerts, in which law enforcement agencies turn to media outlets to quickly put out information about abducted children.

Almost no law enforcement officers were trained in how to deal with child abduction cases in the 1970s; training is common today. In New Jersey, the missing-persons unit helps local investigations with expertise, and acts as a clearinghouse for what are known as "abduction-response teams," which every county is required to have in place.

Those kinds of efforts are typical all over the country. There's now a missing-child clearinghouse in every state, says Allen, of the National Center for Missing and Exploited Children.

The old days of faxing fliers to police departments are over.

"When we opened our doors in 1984, if a child disappeared, it would take us days to get photos out to the media and the public," he says. "Today, what used to take a day or two, we can do in 10 minutes because of the power of the Internet."

Strangers Aren't The Only Worry

While technology has certainly played a part in the changes in communication speed and breadth, particular cases have also served to draw widespread attention to the perils of child abduction.

New laws have frequently been named over the past couple of decades for the child who inspired them — Megan's Law, Jessica's Law, the Adam Walsh Act and the Jacob Wetterling Act. The Amber Alert was named after Amber Hagerman, a 9-year-old Texan who was abducted and killed in 1996.

High-profile cases like those and Etan Patz's spoke to the fears of millions of parents. The boy disappeared on the very first day he walked by himself to his school bus stop.

But the fact that much legislation has been prompted by the most heinous cases has led some observers to worry that they don't target the most pertinent problems.

More than a quarter-million children are abducted each year — the vast majority by family members. Only 58,000 are taken by non-family members, and just a third of them are strangers to the child, Allen says.

"What makes the news has a lot to do with a stranger abduction, but that is not the main way children go missing in the United States, from what we know," says Mary Leary, co-director of the Institute for Law and Public Policy at Catholic University. "We should always be careful that our public policy is based on what's really going on, rather than what's in the media."

They are horrific crimes, but only 115 cases a year nationwide involve what many parents fear the most: children who are not just kidnapped, but killed, ransomed or taken with the intent to keep.

"We're making laws based on exceptional cases, cases that are not typical, and that isn't always the best way to implement laws," says Carlos Cuevas, a professor at Northeastern University's School of Criminology and Criminal Justice.

Cuevas says more evaluation is needed to determine whether programs such as Amber Alerts are actually helping to recover children. Some laws regarding sex offenders, he maintains, have been not just ineffective but counterproductive.

Allen, the president of the National Center for Missing and Exploited Children, harbors no such doubts. Finding abducted children requires not fancy forensics, he says, but average people paying attention and taking the time to study the faces they see through media outlets or on the bulletin boards that are up in every Wal-Mart store.

"In Minnesota, we're batting 1.000," says Wetterling, who directs the sexual violence prevention program for the Minnesota Department of Health. "Every time we issue an Amber Alert, we have a child who is home safe today."