Accessibility links
Hey! You! The Unstoppable Rise Of Heckling President Obama endures it. So does Mitt Romney. Comics make a living off it. And even a PGA golfer heard a chorus of taunts at a recent tournament. So what is it that makes heckling such a cultural institution?

Hey! You! The Unstoppable Rise Of Heckling

Hey! You! The Unstoppable Rise Of Heckling 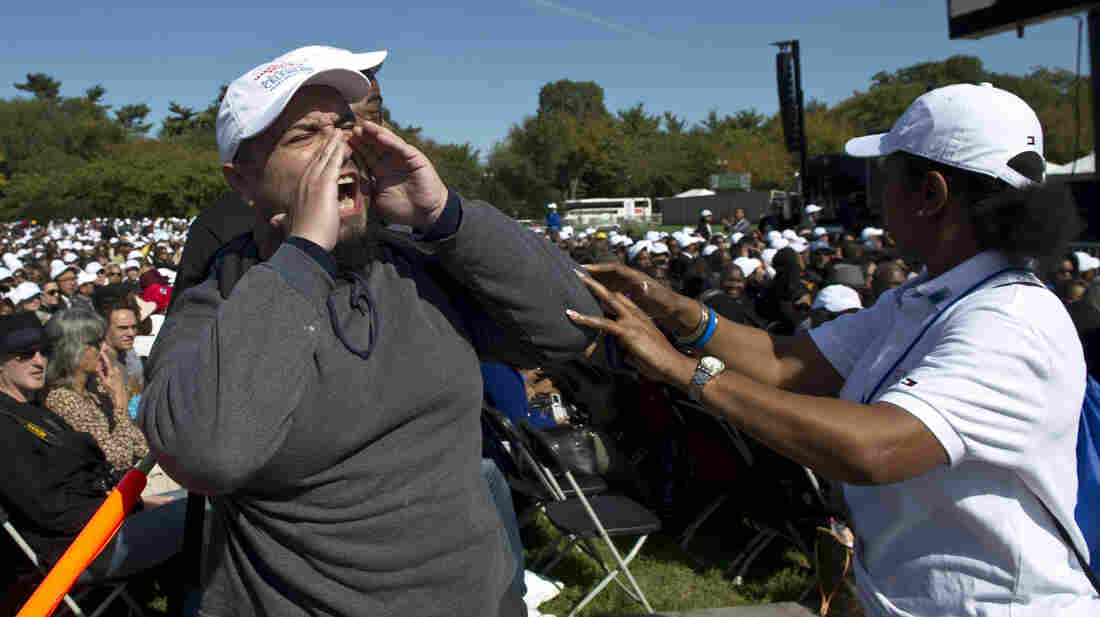 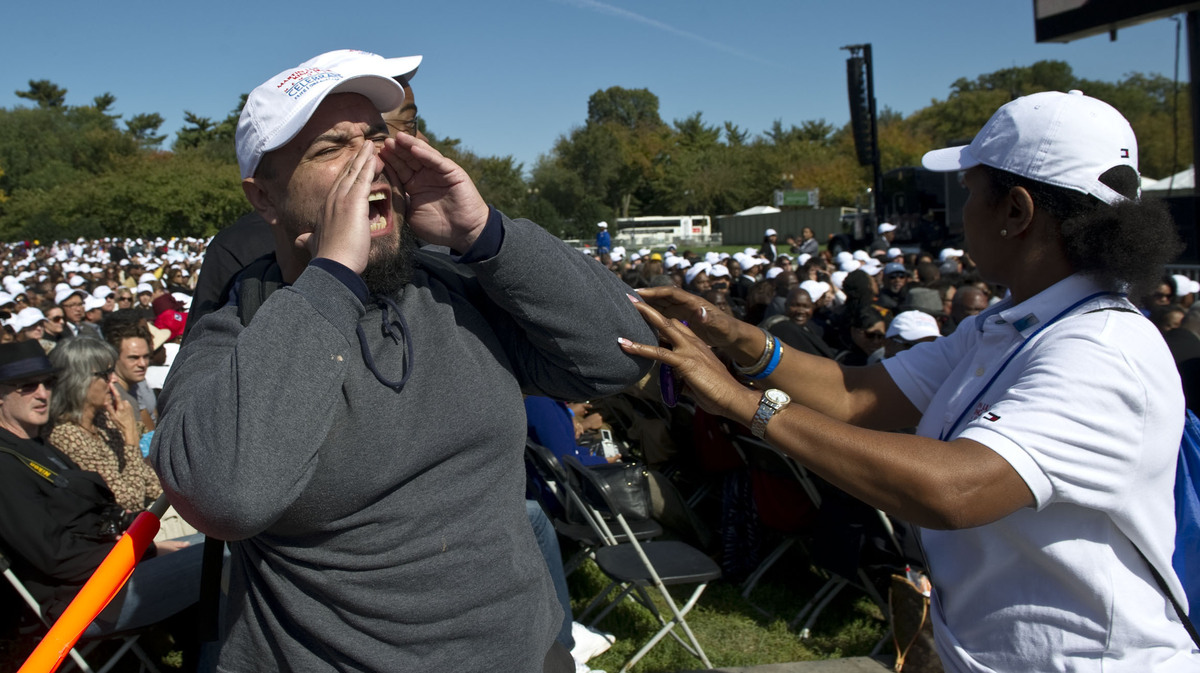 An unidentified heckler lets loose as President Obama begins a speech at the Martin Luther King memorial dedication in Washington, D.C., in October 2011.

As summer nears, Great American Hecklers are being spotted all over the place.

You can see them — and hear their calls — at commencements, sporting events, political gatherings. Hecklers on the right and hecklers on the left.

Hecklers feel right at home on the Internet — commenting on stories, blogging about issues, posting provocative photos. (No, not those kind.)

And you can find all kinds of information about hecklers, including these items:

Hecklers in Hackensack, N.J., hectored city officials — verbally — during a council meeting. Mitt Romney was halted by a heckler in New York City a few weeks ago, and President Obama has been heckled here and there, from Ohio to California.

At one point or another, all of us have spied a Great American Heckler.

Hey, Weeks! Who says YOU can write a story about heckling? You don't know jack sprat about hecklers! You've never heckled anybody in your life!

Anatomy Of A Heckler

Heckling, as California psychologist Pamela Rutledge points out, is not something you can do alone. A heckler needs someone to heckle.

Rutledge, who blogs about human behavior for Psychology Today, says that "heckling can be seen as a disruption or a challenge to power."

The heckler, she says, may want all the attention and the power. Or the heckler may believe he has a legitimate right to express a dissenting opinion. "In any public arena," Rutledge says, unexpected and targeted shouting "shifts the communications from a unidirectional flow to an exchange. By breaking what we might think of as the fourth wall, it disrupts the barriers and often encourages others to join in."

When that happens, the interaction between heckler and writer, er, performer becomes participatory and a collective experience, Rutledge says. "The disruption breaks the fusion between the performer and the audience, and the ability to reconnect rests with how the performer is able to handle the heckler."

Rutledge attributes the abundance of contemporary heckling to the shifting communications landscape, from a traditional, top-down, mass-media, one-directional model to an Internet-driven, troll-baiting, many-to-many, anybody-can-say-anything-to-anybody model that "has increased individual beliefs in the ability to speak up, be heard, and to expect not just a response but a two-way exchange."

Hey, Weeks! Take an ear of corn and shuck it! Amirite?

How To Handle Heckling

Comedians get heckled so often they develop strategies for dealing with the disrupters. Erin Jackson, a semifinalist on NBC's Last Comic Standing in 2008, has been booed off the stage — and Jumbotrons — at the National Mall in Washington.

Heckle. It's a great word, one of those verbs that evoke the very action they represent — like vomit or slide. According to the Oxford English Dictionary, the verb comes from the textile trade. As far back as the 16th century, heckling was a way to split and straighten out flax or hemp fibers.

The present-day meaning, "to catechize severely, with a view to discover the weak points of the person interrogated. Long applied in Scotland to the public questioning of parliamentary candidates," came into play in the early 19th century.

Occasionally on TV, you can still watch formal heckling of politicians in the parliaments of various English-speaking countries.

And she's seen hecklers aplenty. On one occasion, during a political bit (with some offensive language) she even had a heckler apologize.

"When I'm heckled," Jackson says, "the first thing I usually do is to repeat what the person said so that everyone in the showroom knows what happened, and understands what I'm responding to."

No comedian wants to unleash a zinger back at a heckler unless the whole audience knows what the heckler has said to deserve the putdown. "You want to get the crowd on your side against the heckler," Jackson says. "If you can't shut them up immediately, getting a couple hundred people to turn on them can help a lot.'

And if that doesn't work? Allyson Jaffe, who runs DC Improv, where Jackson has performed, says that if a heckler can't be persuaded to hush up by the club's staff, "we will ask them to leave and escort them out of the building."

A few times, Jaffe has had to call the cops. "These are rare occasions," Jaffe says, "and last-resort options."

Hey, Weeks! There's a taxi outside waiting to take you to Scramsville! Get off the page!

Let's Hear It For Hecklers

Is a heckler protected by the First Amendment? This is up for debate — depending on where and how and why the heckling occurs. Heckling at a hockey game is not considered the same as heckling at a campus lecture. Organized disruption is often treated differently from individual outbursts.

According to the National Lawyers Guild, "Although the law is not settled, heckling should be protected, unless hecklers are attempting to physically disrupt an event, or unless they are drowning out the other speakers."

On the other hand, the Foundation for Individual Rights in Education maintains that if free speech is protected, it should also be protected from disturbance and interruption.

Comedian Jackson has another take on heckling altogether. "I actually think we need to work together as a society to create more opportunities where we can heckle each other," Jackson says. "Why should comics get to have all the fun? A Segway tour where people just roll around and disturb other folks while they work. Or one of those double-decker tour buses where you could ride down the street drinking beer and shouting at strangers."

That, she says, would be an improvement.

Yo, Weeks, are you FINALLY done? That's five minutes I'll NEVER get back!