Accessibility links
Obama, Romney On Health Care: So Close, Yet So Far Health care has become one of the starkest contrasts between President Obama and Republican rival Mitt Romney in the 2012 campaign. And that's surprising, given that once upon a time they both came up with similar plans to fix the system. 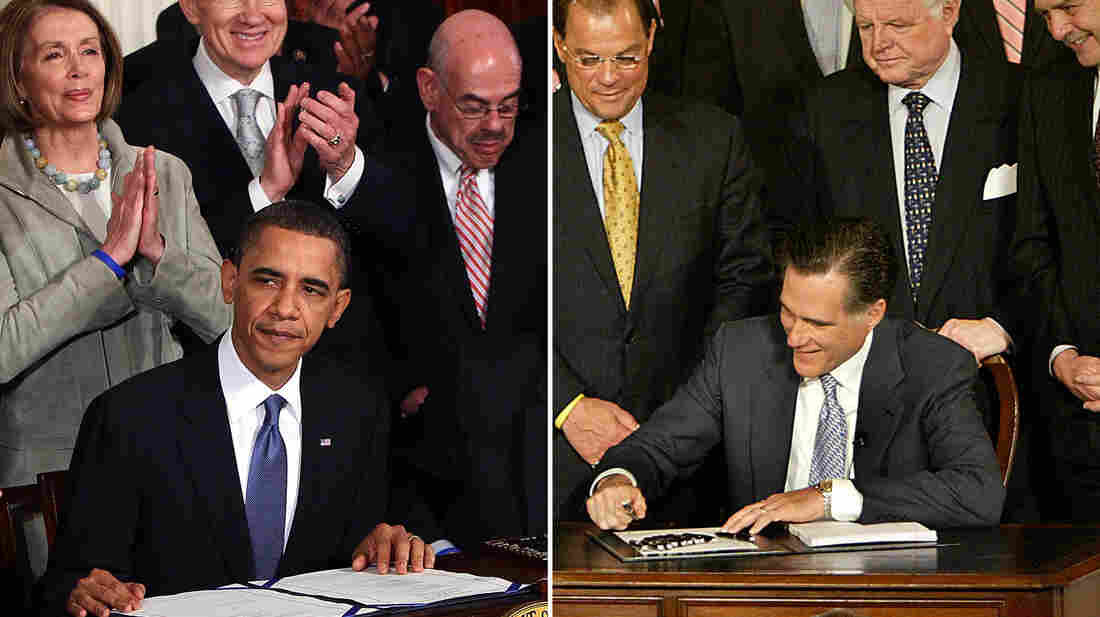 President Obama is applauded after signing the health care overhaul during a ceremony in the White House on March 23, 2010. Then-Gov. Mitt Romney signs a Massachusetts health care overhaul at Faneuil Hall in Boston on April 12, 2006. Win McNamee/Boston Globe via Getty Images hide caption 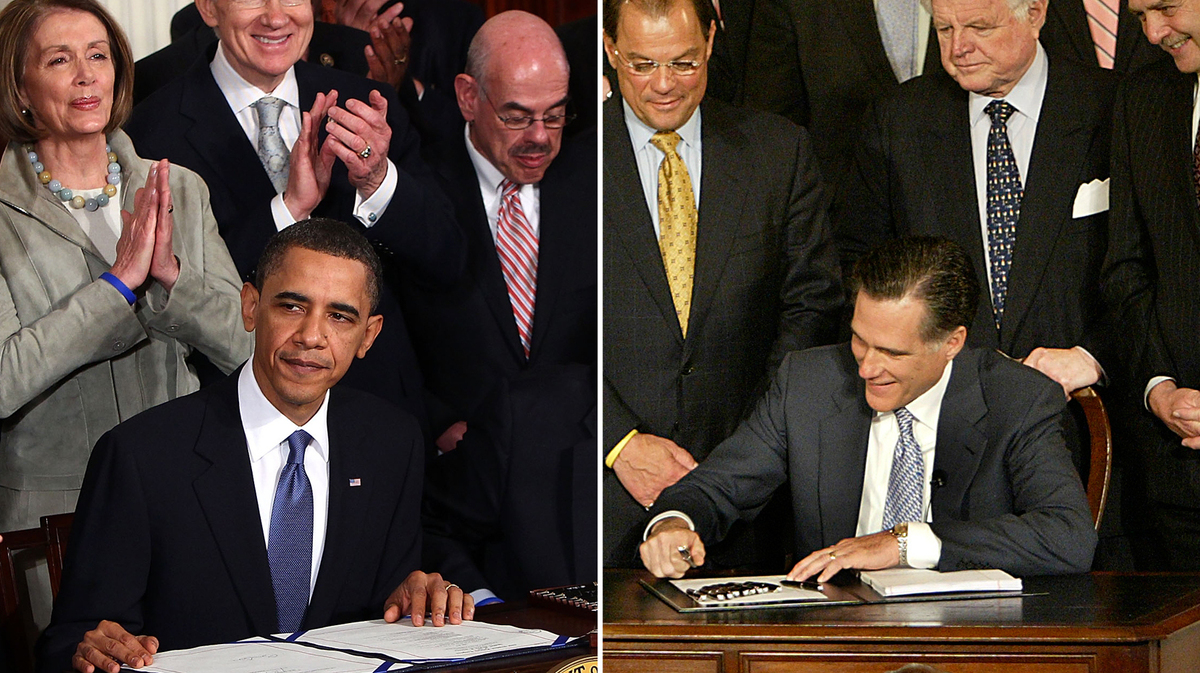 From now until November, President Obama and GOP presidential candidate Mitt Romney will emphasize their differences. But the two men's lives actually coincide in a striking number of ways. In this installment of NPR's "Parallel Lives" series, a look at one of those similarities: They both signed health care overhaul laws based on an individual mandate.

Health care has become one of the starkest contrasts between President Obama and Republican rival Mitt Romney in the 2012 campaign. And that's surprising, given that once upon a time they both came up with similar plans to fix the system.

Stuart Altman, a professor of health policy at Brandeis University, says the two men once occupied the same political space on health care.

"I would define Obama as a moderate liberal and Romney as a moderate conservative. ... Both of them came to the same conclusion," he says. They decided what was needed was a system "built as much as possible on the existing health insurance system."

Both men embraced what was considered to be mainstream health care policy thinking: maintain the employer-provided system but get everyone covered through an individual mandate — a requirement to buy insurance.

From Victory To Problem

Romney went first. In 2006, as Massachusetts' governor, he talked about the state's mandate in decidedly nonideological terms: "We're going to say, folks, if you can afford health care, then gosh, you'd better go get it; otherwise, you're just passing on your expenses to someone else. That's not Republican; that's not Democratic; that's not libertarian; that's just wrong."

Getting rid of free riders was a moral issue for Romney and many Republicans back then, says Jonathan Gruber, an MIT economist who helped the Romney and Obama administrations design the individual mandate. Gruber says he could tell that health care overhaul had a particular appeal for Romney — a businessman who specialized in turning around troubled companies.

"Mitt Romney was a management consultant. And what management consultants are is they're sort of like engineers. They go in, they see a problem, they solve it," he says. "I saw a lot of excitement, this passion, to say, 'Wow, we can move this piece around, add the mandate, rededicate the money, put it together and we can solve this important problem. Isn't that really neat?' "

Just as passing a national health care law was supposed to be the legacy achievement for Obama, Gruber says that back in 2006, as Romney got ready to run for president, the Massachusetts law also looked like a surefire political winner.

"You can understand his thinking, right? He thought, 'Look, I can run for president by saying I solved this intractable problem by bringing conservative principles to bear — individual responsibility, the health insurance exchange.' I mean, there was a guy from the freaking Heritage Institute on the stage with Romney at the bill-signing," Gruber says. "This was a victory for Republican ideals, a victory for using market forces to solve an intractable problem, and I think that Romney probably thought, 'Isn't this a great thing I can run on as a Republican?' ... I would have thought so, too."

"The irony is even worse than that," says Altman, the Brandeis professor. "I worked for Obama during the election and he was adamantly opposed to the individual mandate. ... I was on his advisory group, and we said, 'But you know, you really do need an individual mandate to make this all work together.' He said, 'I won't support that because you're asking, you know, not wealthy people to buy expensive insurance. We've got to get the cost down.' "

During the 2008 Democratic primary, the mandate was the single biggest policy divide between Obama and opponent Hillary Clinton.

In a debate, candidate Obama blasted Clinton's plan for an individual mandate by citing the experience in Massachusetts.

"Now, Massachusetts has a mandate right now," he said. "They have exempted 20 percent of the uninsured — because they've concluded that that 20 percent can't afford it. In some cases, there are people who are paying fines and still can't afford it, so now they're worse off than they were. They don't have health insurance and they're paying a fine."

And Romney and Obama have something else in common, Altman says. They were both victims of the same political sea change: The Republican Party got a lot more conservative.

"Obama campaigned that he was going to be a different kind of a president. He was going to get things done; he was going to compromise," Altman says. "And when he got to Washington, he realized that the Washington that he thought was there wasn't there anymore. So the movement of the Republicans to the right ... hurt Obama and really put Romney in a bind."

Romney's bind was apparent in the GOP primaries, when conservatives questioned his ability to attack the president on a plan so similar to his own. But now, with the nomination virtually in hand, Romney is making health care the heart of his argument against the president.

What was once a common bond is now a deep divide.

"I will not go back to the days when insurance companies had unchecked power to cancel your policy, or deny you coverage, or charge women differently from men," Obama says. "We're not going back there. We're going forward."

There is no overlap at all in the two men's current approaches to health care. If Romney is elected, he'll work to get rid of the law that was based on his own plan. If the president wins a second term, he will fight to keep what he can.