Accessibility links
Folk Singer Bonnie 'Prince' Billy Plays Not My Job Will Oldham is among the most celebrated singer-songwriters in the country, but chances are you haven't heard of him. That's because he doesn't record under his own name, but under a series of pseudonyms — his latest, and most well known, is Bonnie "Prince" Billy. 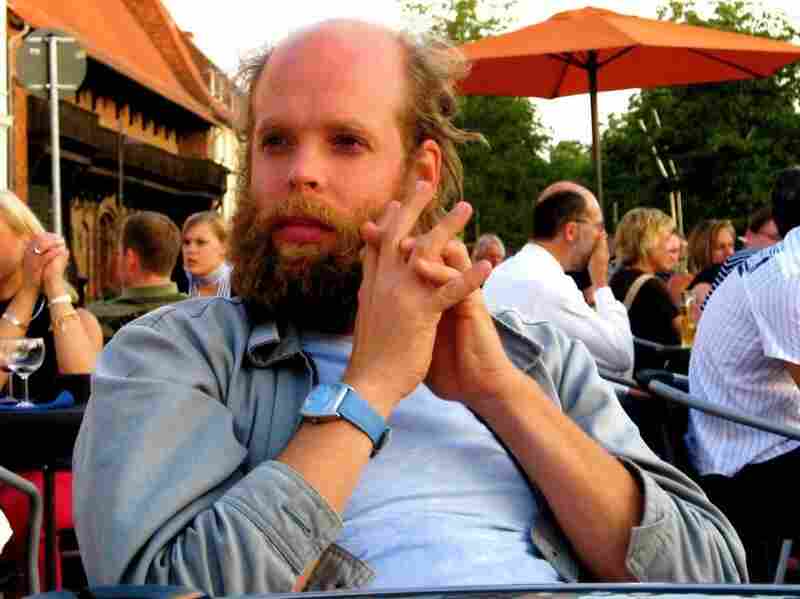 Jesse Fischler/Courtesy of the artist

Will Oldham is among the most celebrated singer-songwriters in the country, but chances are you haven't heard of him. That's because he doesn't record under his own name, but under a series of pseudonyms — his latest, and most well known, is Bonnie "Prince" Billy.

Oldham sings mostly sad songs, with a truly tragic song thrown in every now and again for good measure. And we were thinking: Who's the singer he's least like? We settled on Doris Day. We'll ask Oldham three questions about the sweet-faced, sweet-voiced singer of the '50s and '60s.

And now the game where we ask accomplished people to accomplish far less interesting things. Will Oldham is, according to the New Yorker, one of the most celebrated singer-songwriters in the country, but chances are you haven't heard of him.

This is mostly his fault, because he does not record under his own name, but under a series of pseudonyms. His latest, and most well known, is Bonnie Prince Billy. He's got a new CD out. He joins us now. Will Oldham, welcome to WAIT WAIT...DON'T TELL ME.

SAGAL: Hello. How are you?

SAGAL: So I found about your music when a friend of mine, who has exquisite taste, sent me one of your CDs some years ago. And it's quite amazing, if you haven't heard any of your music as Bonny Prince Billy. We were trying to figure out a way to describe it. One description we came across is quote, "a fragile sort of warble, frittering around haunted melodies in the American folk or country tradition," unquote.

SAGAL: Do you go for that?

SAGAL: Really? You're all about the sales. Your music is, let me put it this way, sad.

SAGAL: For the most part. I mean, one of your big songs, covered in fact by Johnny Cash was "I See A Darkness."

OLDHAM: And you're never sad?

SAGAL: I am when I listen to your CDs.

SAGAL: Do you accept that that your music can be somewhat mournful at the very least?

OLDHAM: I guess I get it out that way or, you know, it's a place to put those kinds of things.

SAGAL: Yeah. By virtue of putting your sadness in songs, are you a happy go lucky person in real life?

OLDHAM: There are those who would disagree with that.

SAGAL: Well, we saw a video. This must be the strangest thing I've seen in a little while, a video that you did for a Kanye West song.

OLDHAM: I was looking for somewhere to spend a quiet weekend.

OLDHAM: And he had said that I could take refuge at his farm one day. And I needed it so badly and I called and he said please do, please come. And as I was on my way there, I called one last time before cell phone service dropped out and I said how do I get there? He gave me the directions and then said, "oh, and we're going to shoot this Kanye West video here while you're here this weekend."

SAGAL: Does that sort of thing happen to you all the time?

OLDHAM: Yeah, basically that sort of thing happens to me.

SAGAL: Pretty much, it's just that what occurs. It's like oh, I'm going over to Zach's house, they're doing a Kanye West video again.

SAGAL: You also are in, of all things, R. Kelly's epic multipart video "Trapped in the Closet."

SAGAL: How in the world did that happen?

OLDHAM: Were those women swooning?

SAGAL: Yes, they were.

SAGAL: They're on the floor, dude.

LUKE BURBANK: For you, not for R. Kelly.

SAGAL: I've seen you quoted that R. Kelly is one of your musical heroes.

SAGAL: Along with Merle Haggard, which I believe, and Leonard Cohen, which I can see.

SAGAL: His music is not what I - I don't hear the similarity between your music, as it were.

OLDHAM: Yeah, it's probably more in the lifestyle.

SAGAL: For example, here are some lyrics from an R. Kelly song, and I want you to interpret them for us, as a fellow artist.

SAGAL: Why don't you do the first one, Carl?

SAGAL: What's your interpretation of that lyric, Will Oldham?

OLDHAM: We're born under the same star sign and he has another great line in a song where he says "inside of your walls there will dwell a Capricorn." And it's the same kind of idea. He finds places to put animals.

SAGAL: We're talking about R. Kelly, right? We have one more R. Kelly lyric for you here.

OLDHAM: Yeah. I was listening to a song of his called "Be My Number Two," which...

OLDHAM: You can go anywhere with.

PAULA POUNDSTONE: I'm realizing through this conversation, I want to thank you, that I could be turning my back on a gifted career as a songwriter.

SAGAL: All right, one last thing, because I mean I want to emphasize you have this reputation as this extraordinarily gifted, almost austere style musician doing this very heartfelt stuff in an uncompromising way. But you keep showing up in odd pop culture places. The last one I'll mention is you play a gorilla trainer in the movie "Jackass 3D."

SAGAL: So how did that happen? Did Johnny Knoxville just get in touch because he's a fan of your music and...

OLDHAM: No, it was actually my dad was a fan of the "Jackass" movies, or the first one. And he passed away and I went to see the second one with a good friend of his, with whom he'd seen the first one. And then there was a guy in town who works on the "Jackass" movies who was working on the third one. And I just thought, oh my goodness, you know, what better tribute to my father than to...

OLDHAM: Whatever they would force me to get into.

SAGAL: And they were responsive to this?

BURBANK: Like, dad, this shot to the sack is for you?

OLDHAM: Because he came out of that first one just saying "that was the worst movie I've ever seen."

OLDHAM: Dad, what was so terrible about it? And as he began to explain the movie, he was fairly soon in tears laughing. And I was like, now is that so bad, dad? Is that so bad?

SAGAL: I've never heard a touching story that revolved around the movie "Jackass 3D." But now, you've done it.

O'ROURKE: Neither has anybody else.

OLDHAM: I think you walk through the world with your eyes closed and your ears covered.

SAGAL: I actually am a little a little humbled. Because I was all, ha, ha, "Jackass 3D" and you're like, well here's this touching story. And I feel...

OLDHAM: It's a beautiful movie.

SAGAL: Well, Will Oldham we are delighted to talk you and we've invited you here to play a game that this time we're calling?

KASELL: You're the world's oldest virgin.

SAGAL: So you sing mostly sad or mournful songs, interspersed with the occasional tragic one. And we were thinking: who's the singer least like you? And of course, it would be Doris Day.

So we're going to ask you three questions about Ms. Doris Day, the sweet faced, sweet voiced singer most famous in the 50s and 60s. If you answer two of them correctly, or more, you'll win our prize for one of our listeners: Carl's voice on their voicemail. Carl, who is Will Oldham playing for?

KASELL: Will is playing for Rick Felkins of Leander, Texas.

SAGAL: All right, for Rick. Here's your first question. Doris Day was famous for playing, mostly, sweet, innocent heroines in a variety of movies, mostly comedies and dramas and musicals. But she could have changed her image by accepting one role she was offered but turned down. Was it A: The jaded prostitute in Klute? B: Mrs. Robinson in "The Graduate"? Or C: The fifty foot woman in "Attack of the Fifty Foot Woman?"

OLDHAM: I go right in, right? I can jump right in.

SAGAL: Go for it.

OLDHAM: I think it was maybe Mrs. Robinson.

SAGAL: You're right, it was Mrs. Robinson.

SAGAL: Doris Day was offered the role of Mrs. Robinson in "The Graduate." She turned it down for moral reasons.

OLDHAM: She turned it down for a life with, you know, 40 cats or something like that.

SAGAL: This is true. She is now an animal lover and an animal patron. But let's move on to the next question. Ms. Day quit movies and around 1968 she started doing TV instead, with the launch of the "Doris Day Show," a sitcom.

Why did she go from movies to TV? Was it A: Alfred Hitchcock blackballed her from film after she refused his advances? B: after her husband died, she found out he had signed her up to do a TV series without her knowledge? Or C: she went to a screening of her last film and shouted, Oh my God, my pores are like sinkholes up there?

SAGAL: And didn't want to be in the movies anymore.

OLDHAM: I'm afraid I like the pores story and I have to go with it, just because I like it, not because it's true.

SAGAL: Following your muse. Yeah, it's not true but it is funny.

SAGAL: No, what happened was is that in 1968 her husband died, and she found out first that she was deeply in debt because he had lost all her money. And secondly, he signed her up to do a TV show, so she felt obligated.

OLDHAM: That's one step closer to the precipice of losing for Rick.

SAGAL: No, no, but here we are. You still have a chance because if you get this last one right, of course, you will win. So she did this sitcom, "The Doris Day Show" and it ran for five years.

And there was something unusual about it. Was it A: Every week, a new stray animal played Doris Day's pet, and viewers were then encouraged to adopt it? B: Every season, the basic premise of the sitcom completely changed? Or C: instead of a laugh track, it would flash the words "Laugh now" on the screen after every joke?

OLDHAM: I'm going to say B.

SAGAL: You're going to say B that the premise changed every season?

SAGAL: You're right, that's what happened.

SAGAL: It was never explained. In the first season, she's a single mom with two young kids living on a ranch in northern California. By the fifth season, she was a swinging single in 1970 San Francisco, working for a magazine. They never explained what happened to the kids.

OLDHAM: Hey Doris, you were right. All the questions were about you.

SAGAL: Carl, how did Will Oldham do on our quiz?

KASELL: Will, you had two correct answers, and that's good enough to win for Rick Felkins. Congratulations.

OLDHAM: Thanks for having me.