Accessibility links
Help Wanted. But Not For Mid-Level Jobs Changes in the job market have meant fewer jobs for those with mid-level skills. Economists call the trend labor "polarization" and say it's forcing those in the middle to take jobs at lower pay. 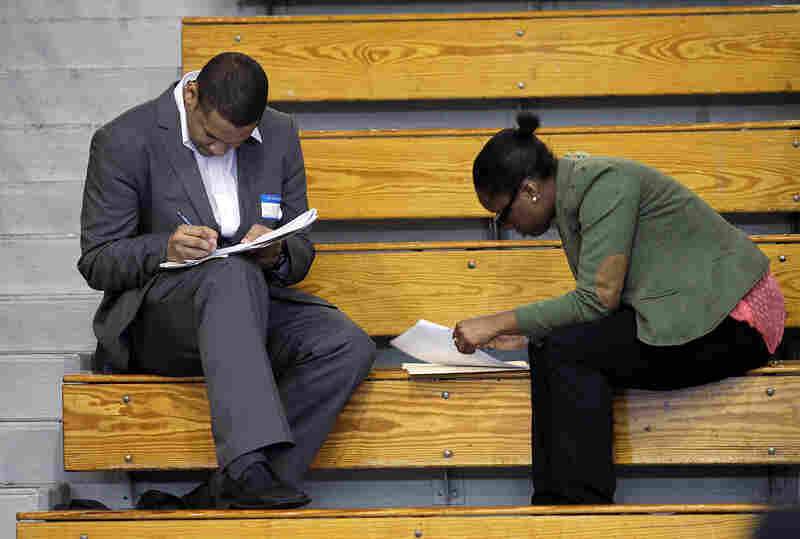 Job seekers fill out applications at a job fair in the Queens borough of New York City earlier this month. Economists say jobs in the middle — in sales, administration and assembly, for example — are being squeezed. Spencer Platt/Getty Images hide caption 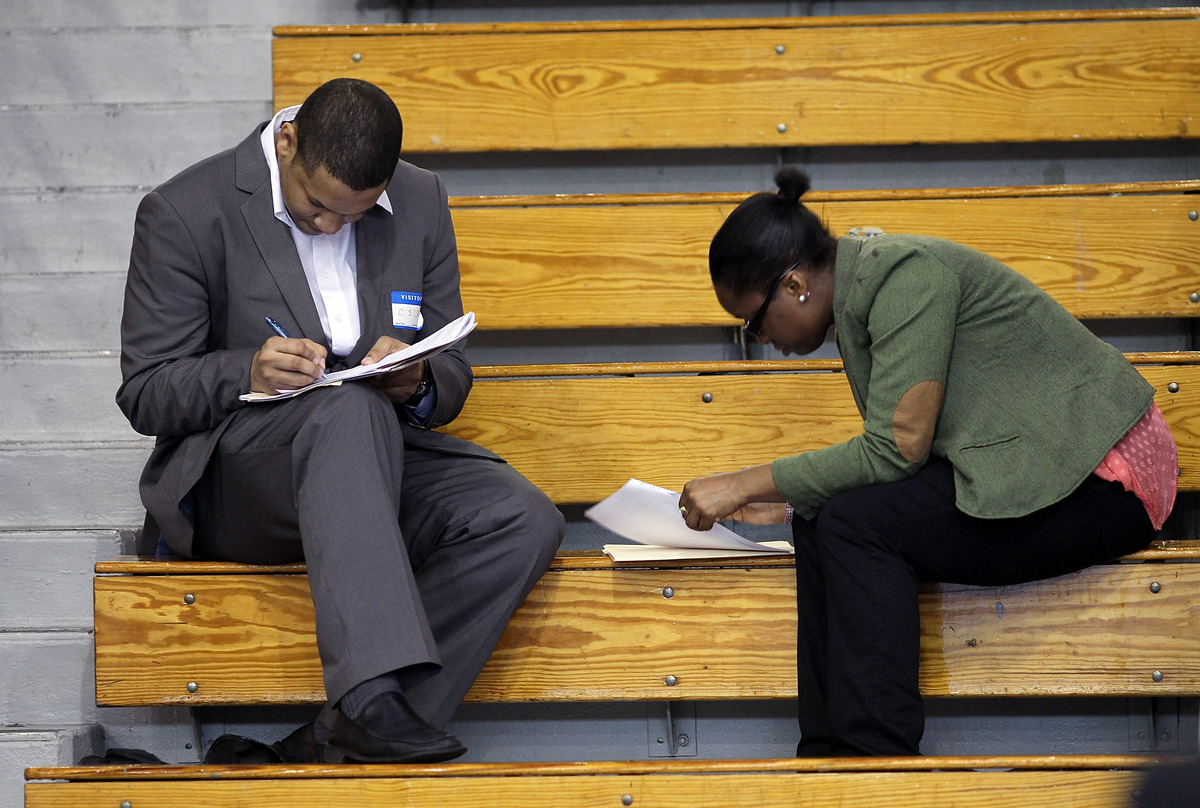 Job seekers fill out applications at a job fair in the Queens borough of New York City earlier this month. Economists say jobs in the middle — in sales, administration and assembly, for example — are being squeezed.

Unemployment figures for May come out Friday. While the numbers will show how many jobs have been added or lost, they won't tell us much about the quality of positions filled or illustrate what economists already know: that the middle of the job market is hollowing out.

Demand remains for people with complex skills, like software engineering or the ability to read X-rays. There is also demand for people to take jobs that require less skill, like cleaning and waiting tables. It's the jobs in the middle that are being squeezed – sales, administration, assembly positions, for example.

Economists have a term for this phenomenon: labor polarization.

"What's happening is we're getting jobs at both ends of the spectrum," says Howard Rosen, a research fellow at the Peterson Institute for International Economics.

The phenomenon goes back a couple decades, but Rosen says it has become much more visible in recent years. Companies accelerated the rate they laid off workers in those middle-skill jobs. Since then, in the recovery, firms haven't been adding those jobs back.

Take, for example, Sonya Spears. Until two years ago, Spears had a full-time job generating sales leads for a California-based company. When she lost that job, she moved from her studio apartment in western Massachusetts to a group house close to Boston where she has to share a bathroom and kitchen.

We like to think of the march of progress as creating more and more good jobs, and fewer and fewer undesirable jobs. But that's not the era we're living in.

Now in her early 50s, Spears says the only job she has gotten so far is part-time, for $10 an hour. She says she surfs help-wanted ads on Craigslist and Careerbuilder – to no avail.

"I feel pretty bad. I never thought I'd end up like this, at my age, 'cause when I was younger, it seemed like only the experienced people got the jobs," Spears says. "Now they want the young kids out of school, and they don't want experienced people any more."

Spears, who has a college degree in communications, feels stuck. For health reasons, she can't do physical labor or even retail jobs requiring her to be on her feet all day. Nor does she have the skills necessary for some of the higher paying work she'd like to get.

"I can't afford any other training," she says. "I was thinking about maybe going and getting a master's degree; but because I cannot get grants or loans, I can't afford to do that."

Faster processing speeds and software mean things can be monitored remotely. Software makes it easier for people to digitize and manipulate data.

So, for example at MIT, where Autor works, the school was able to save money by laying off many administrative workers without severely affecting productivity. There simply was less paper to push around. The school found it still needs professors and it still needs janitors, but not the layer of staff in between.

"And that's an uncomfortable phenomenon because we like to think of the march of progress as creating more and more good jobs, and fewer and fewer undesirable jobs," he says. "But that's not the era we're living in."

He says that partly explains why so many people have gotten discouraged and stopped looking for work, or why they remain unemployed for a very long time.

"And the problem is that once especially older, less-educated workers are out of the labor force for a while, they just become increasingly less likely to return," Autor says.

For Spears, owning her own business would be her dream, but that's not an option. She can't get a bank loan because the last couple of years have destroyed her credit.

"If I had my way, I'd not have to depend on an employer again," she says, "but I'm not in the situation to do that now."