Accessibility links
Afghan Female Boxers Strike A Blow For Girl Power Women in Afghanistan have few opportunities to play sports, and they have no history of boxing. But one persistent coach has built a team, and one of his boxers is headed to the London Olympics. 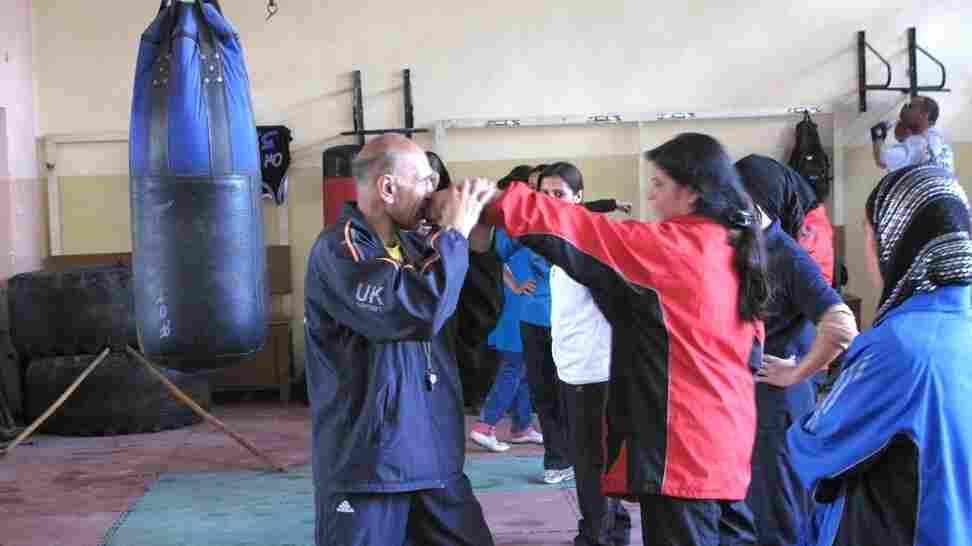 Saber Sharifi has been recruiting and training female boxers in Afghanistan over the past five years. He has often faced resistance from the families of the girls, but there are now 30 boxers on the team, and one will be going to the London Olympics this summer. Ahmad Shafi for NPR hide caption

My dad received death threats because of me two years ago. The threat was serious, and I had to stop training for a whole month. But our coach came to my father and promised he would personally protect me. My father agreed, and I started training again.

Shabnam Rahimi, 19, an Afghan boxer, on the threats her family has faced

When Saber Sharifi goes out recruiting girls and young women for his female boxing team in Afghanistan, he encounters a lot of skeptical parents.

"I reassure them that their daughters will not have broken noses on their wedding day," he says with a smile.

Sharifi launched his recruiting campaign in girls' high schools back in 2007. After three months of relentless speeches and presentations, he could only get two girls to sign up.

But he didn't give up. After two more years, he had eight more members on the team.

Today, he has 30 female boxers, and one them, Sadaf Rahimi, will be going to the Summer Olympics in London.

Sharifi still needs to get the approval of the skeptical parents. He promises them he will personally take the girls in his own car to the gym, at Kabul's Ghazi stadium, and bring them back home safely three times a week.

It's still not an easy decision for the parents. It was very difficult, says 19-year-old Shabnam Rahimi, the first Afghan female boxer to bring back a gold medal from a regional championship.

"My dad received death threats because of me two years ago," she says. "The threat was serious, and I had to stop training for a whole month. But our coach came to my father and promised he would personally protect me. My father agreed, and I started training again."

Despite all the risks, Afghanistan's female boxers say they are determined to fight for their rights inside and outside the ring. They say the sport has given them hope to pursue their dreams.

Halima Sadat, 16, says she sees boxing as helping prepare her for a career as a lawyer.

"I want to fight corruption and go after people who take bribes and who violate our rights," she says. "I want to make sure that powerful men don't get away with committing crimes."

The female fighters have few resources and limited space. But they are spirited and determined as they throw punches during this training session.

The only member of the team who has been selected to participate in the Olympics — Sadaf Rahimi — is currently training in China.

For the other young women training in this dimly lit gym in Kabul, Sadaf's participation in London is not just about a quest for Olympic glory. For them, she represents rising female power in Afghanistan.