Accessibility links
In Sweat Lodge, Vets Find Healing 'Down To The Core' Salt Lake City's Veterans Affairs center is one of just a handful where veterans can participate in Native American sweat lodge ceremonies. Over the years, these ceremonies have drawn men and women who have served in wars from Vietnam to Afghanistan. In the sweats, veterans say, they find relief. 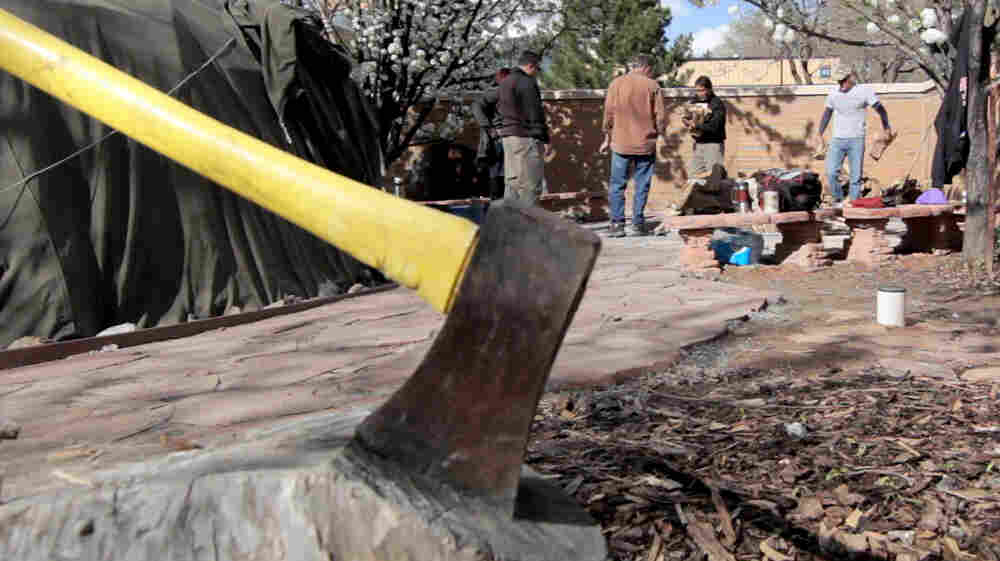 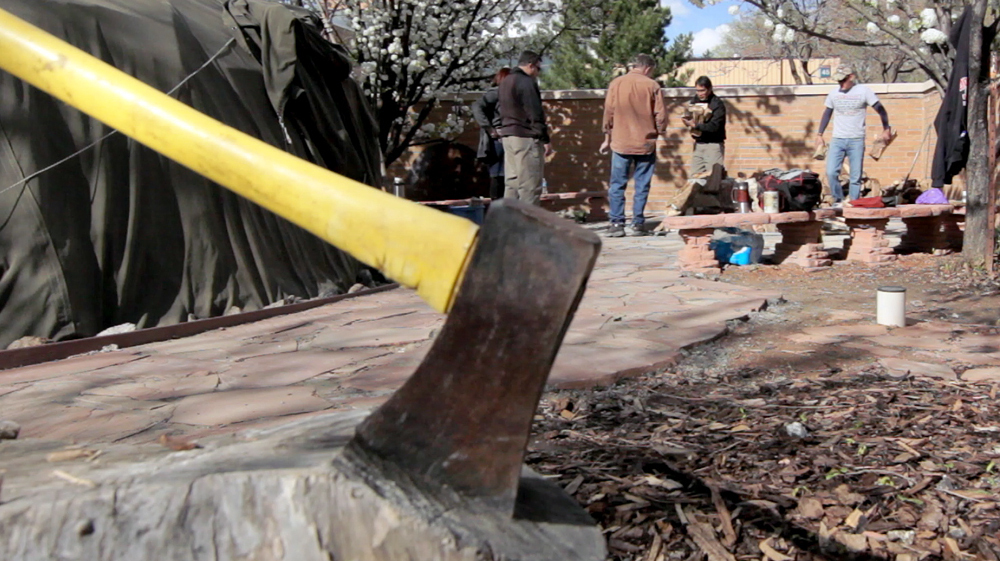 Substance abuse. Violence. Even thoughts of suicide. These are some of the problems that many veterans returning home from the wars in Iraq and Afghanistan are struggling with.

Today it's called post-traumatic stress disorder, or PTSD, but it has affected veterans going back much farther. While doctors and researchers put enormous efforts into developing new treatments, one group of veterans in Salt Lake City is finding relief in a very old tradition: a Native American sweat lodge.

If you didn't know to peer over the six-foot brick wall next to a parking lot at Salt Lake's Veterans Affairs center, you'd never guess it was there.

On a Friday afternoon, Cal Bench, a Vietnam veteran, is here early, gathering firewood like he does every week for the ceremony that will start in a few hours.

"I went into the service at 18 and I went to Vietnam at 19," Bench says. "And I had no idea how it would change or affect you mentally. The concept that I would carry that around forever was just hard. But I just never had any place to turn. I came here and I was given a blessing."

'Healing Right Down To The Core'

Bench started coming to these sweats in 2005 to cope with anxieties related to his combat experience. He found relief in the sweat, as well as a spiritual connection that has kept him coming back.

I just never had any place to turn. I came here and I was given a blessing.

This VA is one of just a handful in the country that offers them. A sweat is a ceremony conducted by a Native American spiritual leader in a dome-shaped structure, or lodge. Sweats are common in Indian country.

"It's healing right down to the core of that veteran," says Arnold Thomas, a medicine man from the Shoshone Paiute tribe. He has training in social work and chaplaincy, and he has conducted the veteran sweats at the VA since 2004.

"When they've been overseas in combat, there's a part of them that is left there," Thomas says. "So when we have the ceremonies, there are certain prayer songs that I offer and make that effort to bring their spirit back home."

Over the years, these ceremonies, originally intended for Native American vets, have drawn more and more non-natives — men and women who served in Vietnam, the Gulf War, Afghanistan and Iraq. And while the sweats aren't a good fit for every veteran who tries them, there's a core group who have added these ceremonies to their medical and psychological treatments.

The VA has taken note of their benefits. In February, the sweats were moved from the substance abuse program to chaplain services, so they would be more widely available to veterans with PTSD.

"Looking at the astounding rates of suicides within the military over the last few years, what I'm reminded is ... all people have the ability to reason, unless they're grieving. So oftentimes I ask the veterans, 'If you can't reason, what is it you're grieving?'" Thomas says. "And we sit down and I allow that space for them ... to talk about those feelings, those memories. And I say, 'Well, turn that thought, that emotion, intertwine it into a prayer, so you can let it go.'" 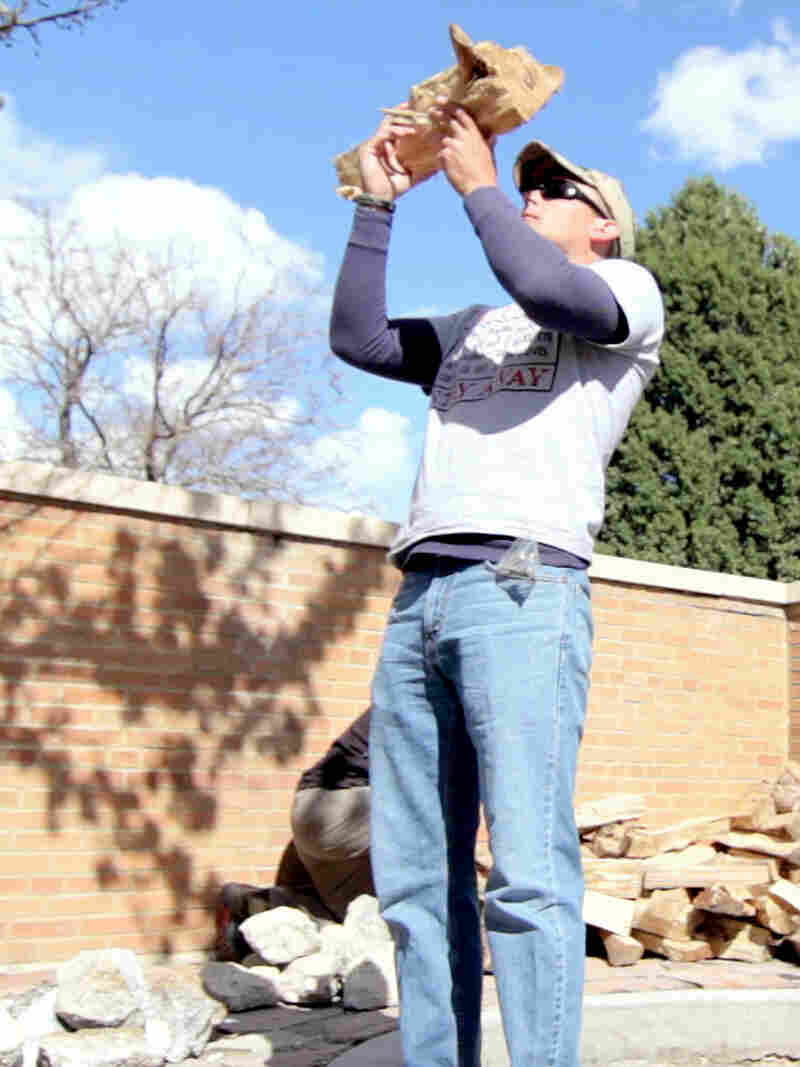 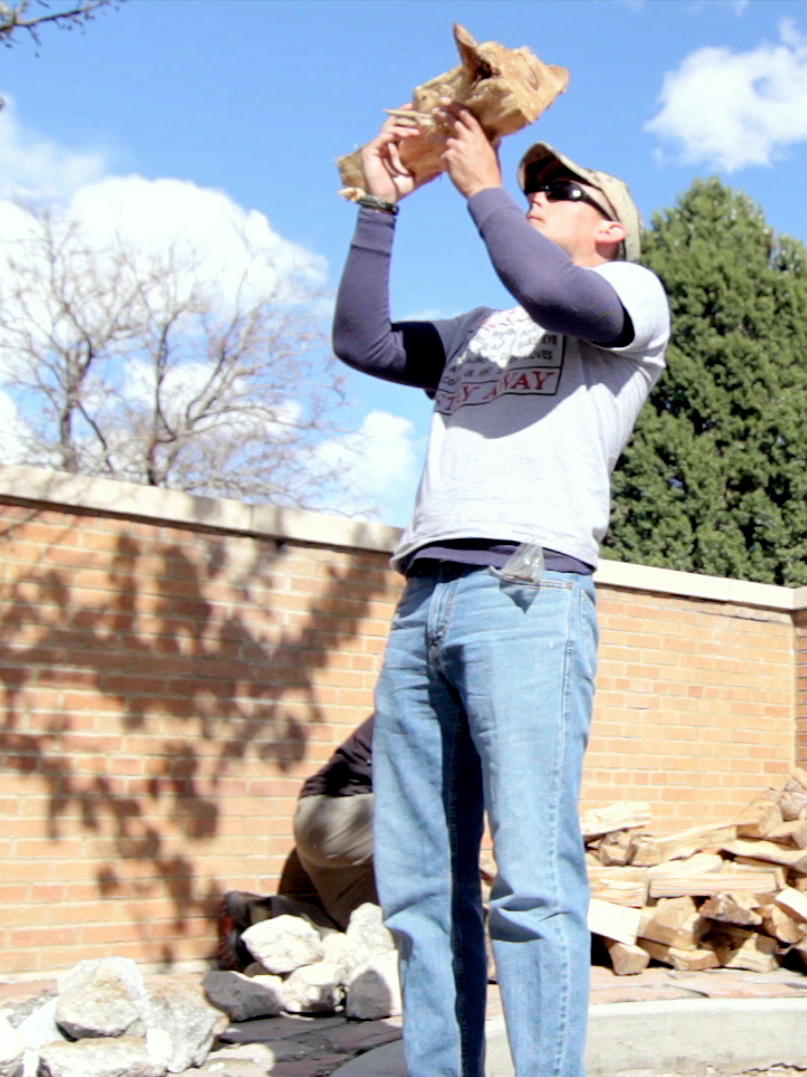 Veteran Steve Rich prays before placing a log in the fire pit.

Setting Down A Heavy Weight

As one man brushes clean the 53 stones that have been selected for the night's sweat, Steve Rich prepares the fire pit that sits next to the lodge. Rich is a Gulf War veteran with PTSD who is going through the VA's substance abuse program.

"Since Iraq in 1991, I've carried around a couple of, I'd guess you'd say, spirits ... one was a friend who was lost over there, and the other was an enemy soldier that I killed," he says.

For 20 years, those memories haunted Rich, to the point that he started to abuse alcohol. Then a few months ago, his substance abuse counselor at the VA suggested attending a sweat — and bringing those spirits in with him.

"So I did, and [at the] beginning of the sweat, Arnold the Shaman sings a song that is to call the spirits to the lodge. And so throughout the ceremony that night, I just imagined them sitting there with me and speaking with me, and got a lot of closure, I guess you'd say, with that," Rich recalls. "So at the end of the ceremony, Arnold will do a song that's sending the spirits back to their homes, the spirit world. So when we did that song, I let go of them and released them. To say it best: I been walking around with this backpack with this weight in it, and doing that I was able to take off the backpack and just set it down and continue on my path."

The fire has been crackling for about two hours now and the stones are beginning to glow red. The sun is low on the horizon, and veterans from Vietnam to Afghanistan begin to arrive and mingle around the fire. Most are familiar faces, but Thomas also welcomes a newcomer.

Jared Hooker served in Iraq. And though he has been back for several years, he has struggled to come to terms with one particular memory: trying to save a friend whose tank was hit right in front of him.

"As we [were] pulling him out, his helmet fell off and a big chunk of his skull fell off into the floor," Hooker recalls. "Blood everywhere. It was chaos. It was just ... I mean, we killed a lot of people in Iraq but I was never really exposed to [a death] that close to someone that I knew."

This happened at the end of Hooker's tour. And within a month, he was back home in the U.S., with his family.

"And I felt like I seemed normal. But just having conversations with people, instantly [they] were like, 'Dude, we love you and we miss you, man, but you're different.' ... 'What do you mean I'm different? How am I different?' But I was in that mindset. I was still hypervigilant," he says.

I'm hopeful that this will at least let me get in touch with who I really am, and not this monster I've become of being violent and wreaking havoc on other people because I'm hurting.

Hooker says he would swerve his truck whenever he saw trash on the street for fear it concealed a bomb. He was uncomfortable in public places like restaurants. He started drinking and getting into fights.

"Growing up, I hadn't been in a fight all through my high school career; then when I got back from Iraq, I was ready to throw down with anybody for any reason," he says.

And the drinking got worse. "I hated my life. I drank every night so I could go to sleep and pass out."

Then came trouble with the police and several arrests, including one that landed him in jail for 3 1/2 months. "And it really gave me enough time in jail to realize that if I don't stop doing what I'm doing, eventually someone's going to kill me. Or I'm going end up killing myself."

Hooker says participating in the night's sweat is important to him. "I'm willing to try anything. So I'm hopeful that this will at least let me get in touch with who I really am, and not this monster I've become of being violent and wreaking havoc on other people because I'm hurting."

There's a feeling of anticipation in the air as Thomas, the medicine man, gathers the rattles and drum he will use for the ceremony.

The veterans quietly go off to change. The men put on swim shorts, and the women wrap themselves in sheets that they wear like togas. The medicine man enters the lodge, and the veterans line up in front of the small opening.

Two helpers are busy bringing the glowing stones into the lodge from the firepit, scooping them out with a pitch fork, brushing off the embers, then carefully walking them into the center of the lodge.

Thomas leads the group in a prayer song that gives thanks to the trees for giving us oxygen to breathe, fruit for sustenance and wood for shelter. The intensity of the song builds with each repetition, until he stops singing and asks the assistants to seal the entrance with heavy fabric.

Inside the lodge it's pitch black, and the group of about 20 sits in a tightly packed circle as the medicine man pours water onto the stones to create steam. For the next several hours he leads the group in a series of songs and prayers.

Three times during the ceremony, the entrance is uncovered to let in the cool night air. A faint light from the nearby parking lot slants through the billowing steam, lighting the group in silhouette for those few minutes.

During one of these breaks, the medicine man pulls out a clutch of eagle feathers, then asks the new veteran to stand and walk over to him. He says a blessing, then with the feathers makes scraping motions over Hooker's entire body, from head to toe, cleansing him of war.

Taki Telonidis is a producer for the Western Folklife Center. Support for this story was provided by the George S. and Dolores Doré Eccles Foundation.