Accessibility links
Big Money: Stuffing The Ballot Box? In the era of superPACs, political parties and candidates seem to be the last players in the system who must abide by limits on fundraising and spending. Some observers say it's time to get rid of campaign contribution limits, but others worry that would open the door only wider to corruption. 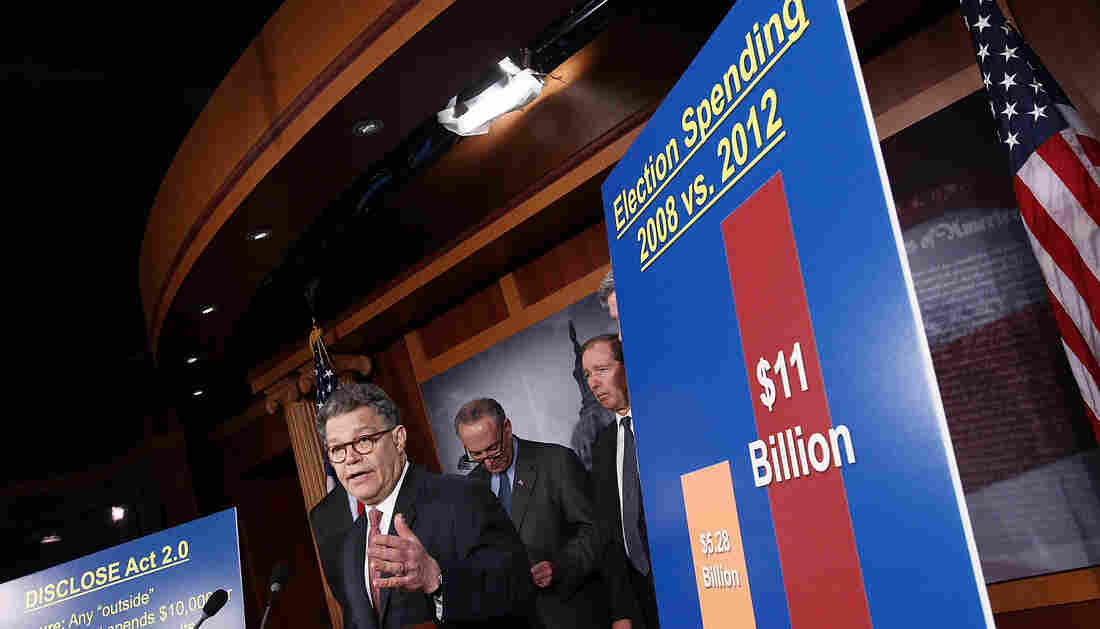 Al Franken of Minnesota was part of a group of Democratic senators at a March news conference announcing legislation "to blunt the worst effects" of the Supreme Court decision that paved the way for the rise of superPACs. Win McNamee/Getty Images hide caption 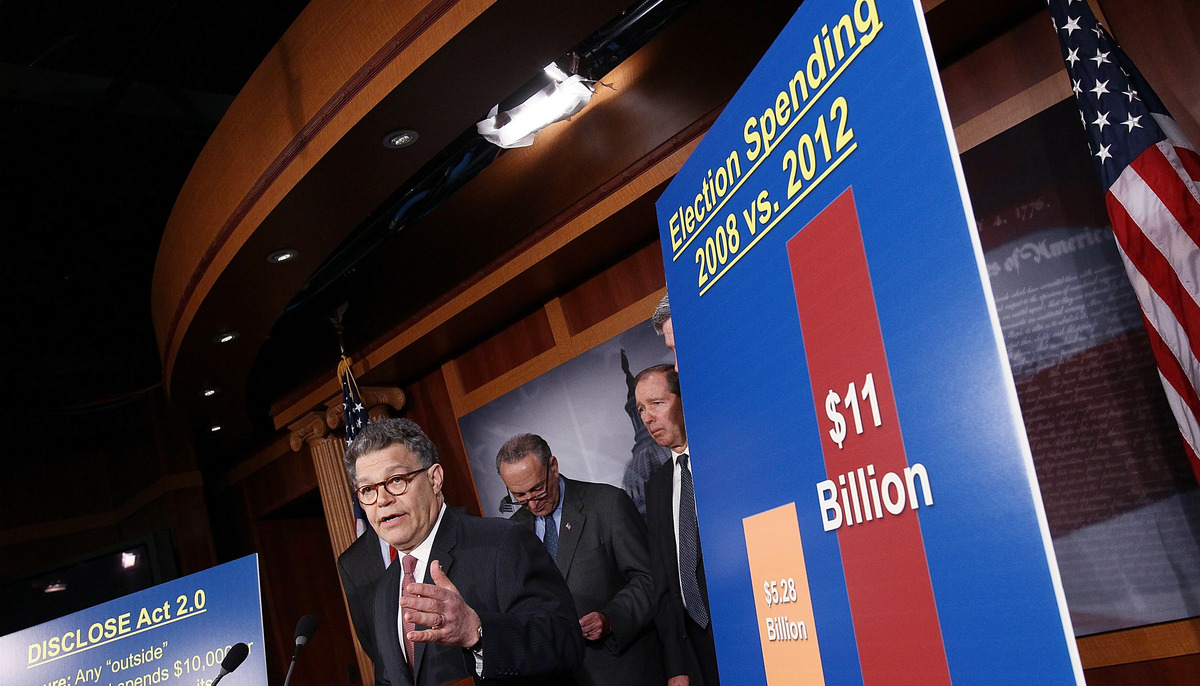 Al Franken of Minnesota was part of a group of Democratic senators at a March news conference announcing legislation "to blunt the worst effects" of the Supreme Court decision that paved the way for the rise of superPACs.

You wouldn't think politicians would have any trouble raising enough money these days. The presidential race is expected to be a billion-dollar affair, and spending records have been shattered at the congressional level.

But many candidates are being outgunned by superPACs and other outside groups with nearly unlimited funds at their disposal. Those dollars have swayed primaries in states such as Pennsylvania, Indiana, North Carolina and Ohio. More than $500,000 in superPAC cash from a 21-year-old college student helped decide the winner of a contested GOP primary last week in Kentucky.

Campaign Finance 2012: Breaking Down Where Your Money Can Go

With billionaires dashing off multimillion-dollar checks to superPACs, political scientists and some politicians themselves are worried that candidates have become mere bystanders in their own campaigns.

"Those on the ballot are much more of an afterthought than they ever were before," says Jon Erpenbach, a Democratic state senator in Wisconsin. "In some cases, candidates don't even matter."

Is The System Broken?

All of this has triggered debate about whether it makes sense to have a system in which campaign finance limits apply mainly to political parties and candidates. Opinion on how best to fix the problem remains split roughly along party lines.

An increasing number of Republicans want to close what they consider the opposite of a loophole, saying it makes no sense to handcuff candidates when money is otherwise flowing so freely.

"The problem is the limits," Tennessee GOP Sen. Lamar Alexander said at a recent Rules Committee hearing. "These new superPACs exist because of the contribution limits we've placed upon parties and candidates. Get rid of the limits on contributions, and superPACs will go away."

So, You Want To Create A SuperPAC? Fill In The Blanks 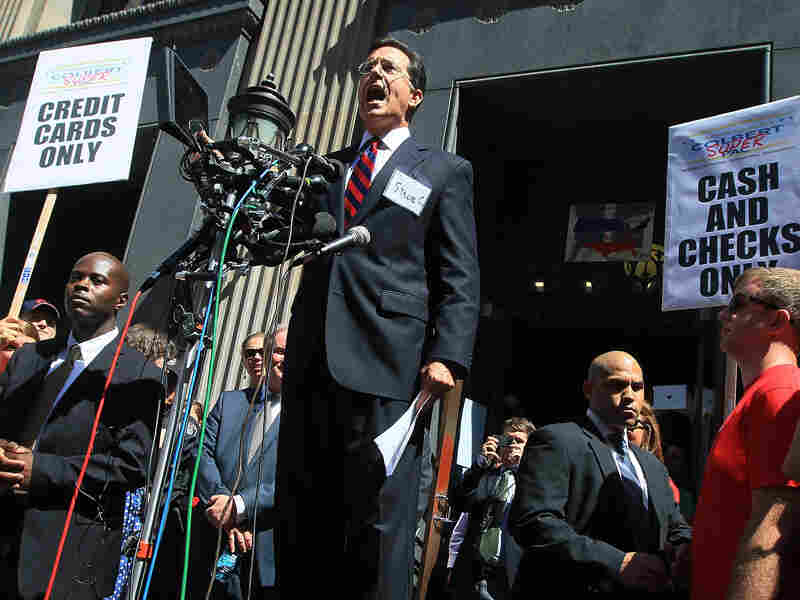 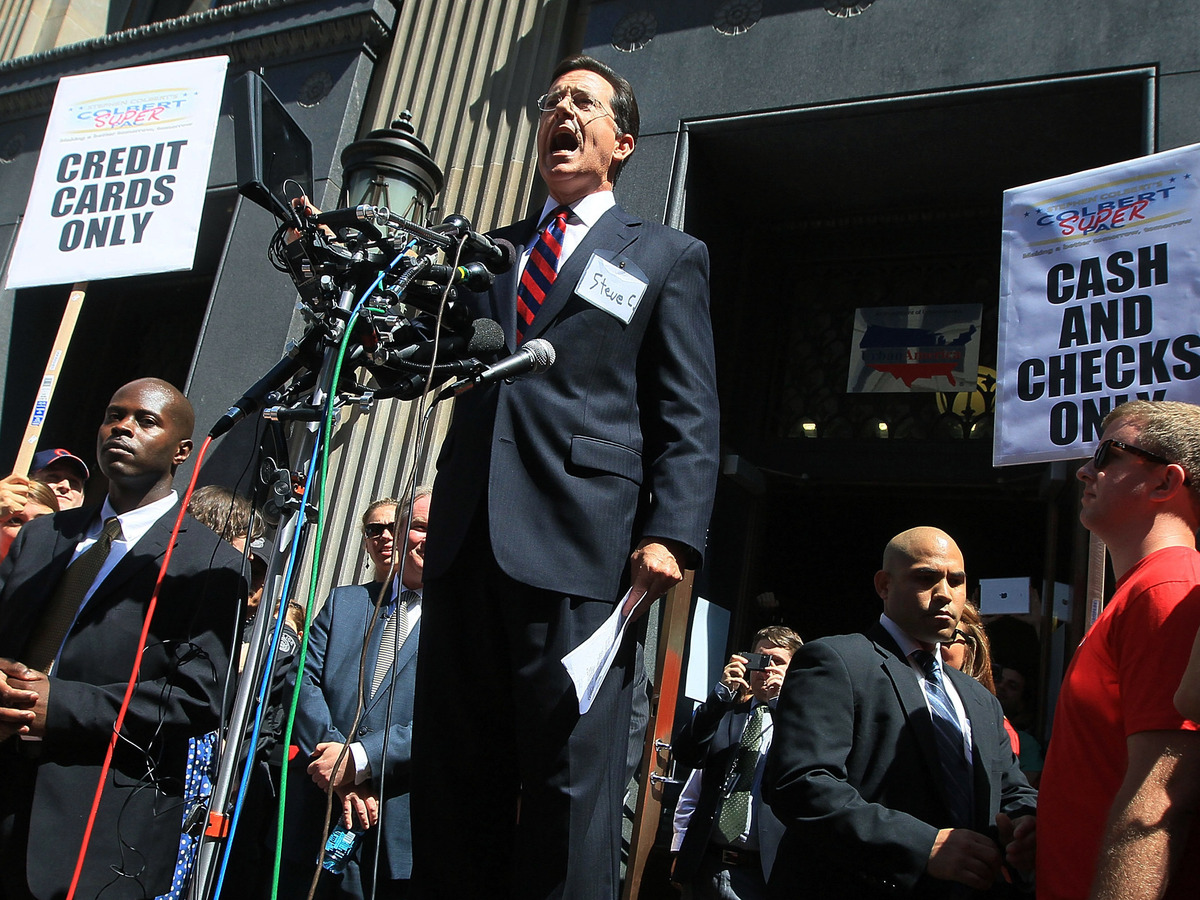 There are 450 superPACs currently registered with the Federal Election Commission. If you want to create your own superPAC, you have to fill out two forms. And it's really, really easy.

First comes the "Statement of Organization," FEC Form 1. Every PAC must file this within 10 days of raising or spending more than $1,000 on a federal election. And crucially, it's where you provide the FEC with the name of your committee.

Choosing a name is one of the main ways you can define your superPAC's purpose. And many of these names appear to have tongue planted firmly in cheek — see comedian Stephen Colbert's superPAC, Americans for a Better Tomorrow, Tomorrow. Other names already in use: "Bears for a Bearable Tomorrow" and the "Peeps PAC," which raised more than $1,000 in a two-and-a-half month period.

At least 11 existing superPACs, in fact, use the word "tomorrow," and several use it more than once, including Colbert's group and "Cats for a Better Tomorrow, Tomorrow." Another popular word choice is "future." It's used by 18 superPACs, including the pro-Romney group, Restore Our Future. Other top choices are "action," "America" and "super." But none can measure up to the superPACs' superword: "liberty," used by 71 registered groups in all.

OK, so once you've filled out Form 1 listing the name of your superPAC, your treasurer and your custodian of records, there's only one more thing the FEC needs from you. It's a letter that officially defines your group as a superPAC and announces your intent to "raise funds in unlimited amounts" and not coordinate with a party or candidate. There's even an FEC-approved template that provides you with fill-in-the-blank spaces for your committee name, the date and the treasurer's signature.

Abolishing those limits would only open the door to outright influence peddling, according to those who advocate keeping the rules in place.

"To suggest that the solution to the problem is for candidates to raise the money themselves would just double down the possibilities for corruption," says Josh Orton, political director of Progressives United, a liberal political action committee that favors campaign finance limits. "Can you imagine the kind of conversations that could happen if we lifted the restrictions on corporations giving to candidates themselves?"

Newt Gingrich, who was targeted by pro-Mitt Romney superPAC ads before ending his presidential bid, says he favors a system in which individuals give directly to campaigns instead of superPACs.

"We would be better off with a system that says any American can donate any personal amount of income after personal taxes as long as they report it online that night, and they give it to the candidate," Gingrich said Thursday. "And then the candidates would have to be responsible for the advertising. You would have a cleaner, more positive, healthier system."

Individuals are limited to donations of $2,500 per candidate per election, which means they can contribute that amount for both primary and general election campaigns. Limits on gifts to parties are higher; for instance, an individual may give a national party $30,800 per year and a state party $10,000.

The limits on what outside groups can spend on campaigns have largely been eroded since the Supreme Court's Citizens United ruling in 2010. That decision has been hailed — and derided — for ushering in a new era of campaign finance law. But it was an earlier Supreme Court decision, in Buckley v. Valeo, that made it hard to make campaign finance restrictions stick.

That case found that money in politics is protected as equivalent to free speech. Ever since the 1976 Buckley decision, money has been like water, finding its way into the political system through new means, regardless of what restrictions have been enacted.

Here Today, But Maybe Not Tomorrow

"Right now, you have the worst of all worlds — unlimited contributions to third-party entities, with some, but certainly not instant, disclosure," says Trey Grayson, a former Republican secretary of state from Kentucky who now directs the Harvard University Institute of Politics.

Grayson says he'd rather see money put in the hands of candidates and parties, who are more accountable to voters than campaign committees that may disappear after the election.

Currently, messages from candidates themselves in a contested race are likely to make up only a "small sliver" of total campaign advertising, says Ed Goeas, a Republican consultant who favors lifting limits while requiring disclosure of donors. 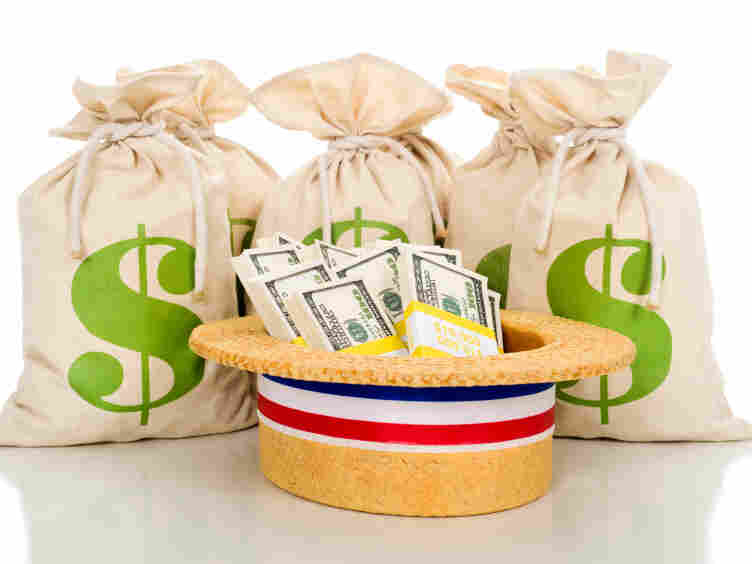 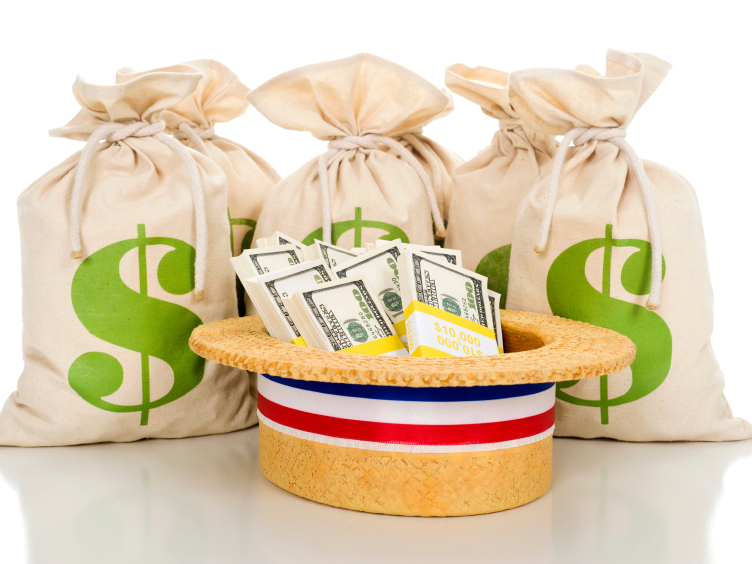 2012: SuperPACs become a primary feature of presidential campaigns in both the Republican primary and general election.

2010: The Supreme Court strikes down the ban on direct corporate spending in campaigns in Citizens United v. Federal Election Commission, while the D.C. Circuit Court of Appeals rules that contribution limits for independent groups violate the Constitution.

1996: Soft money, unlimited funds raised by parties for voter turnout and education efforts, emerges as a major component of the year's presidential race.

1976: In Buckley v. Valeo, the Supreme Court upholds limits on contributions but strikes down limits on campaign spending.

SuperPACs are not supposed to coordinate their messages or strategies with candidates, but many campaign finance advocates concede the line often gets blurry.

Still, they say erasing the line entirely would do great damage to the political system. Having politicians directly receive large or unlimited funds from entities they might regulate would be a surefire recipe for corruption, they say.

"We're in pretty bad shape right now, but there are still some lines," says Meredith McGehee, policy director for the Campaign Legal Center. "By funneling large amounts of money to politicians, what you would actually have is just more candidates elected who are beholden to a small elite."

Genie May Be Out Of The Bottle

Supporters of such limits point to possible models to stem the tide of money. Public financing systems in Maine and Arizona, as well as one being bandied about in New York State, for example, give politicians incentive to raise small amounts of money from constituents.

Earlier this month, Connecticut's Legislature passed a bill that would require corporations to be more transparent about their election spending. It's not clear whether Democratic Gov. Dannel Malloy will sign it, due to concerns about its constitutionality.

And next month, the Supreme Court may decide to take up a Montana case that would determine whether corporations can be banned from contributing to state-level campaigns. But unless there's a change in the court's voting makeup or proclivities, it's unlikely any restrictions will remain in place to prevent large funds from pouring into campaigns in one form or another.

In a speech Wednesday, former Justice John Paul Stevens, who dissented in the Citizens United case, suggested the court would at some point have to revisit the logic of the 2010 decision. The court concluded that corporate donations amount to protected free speech but did not address whether the same holds true for foreign corporations. "It will be necessary to explain why the First Amendment provides greater protection of some nonvoters than to that of other nonvoters," Stevens said.

Even those who would seek to level the playing field by allowing candidates and parties to raise more money directly believe that the genie may already be out of the bottle. Many rich donors have come to like superPACs, which allow them to control their own messages.

"I do think the current system will get worse until we have significant reforms," says Nick Nyhart, president of the Public Campaign Action Fund, which favors fundraising limits.