Accessibility links
China, Philippines Face Off Over Remote Islands It began as a dispute over a fishing boat. But the confrontation in the South China Sea points to growing Chinese assertiveness in the region, and some see it as a test of U.S. resolve, as well. 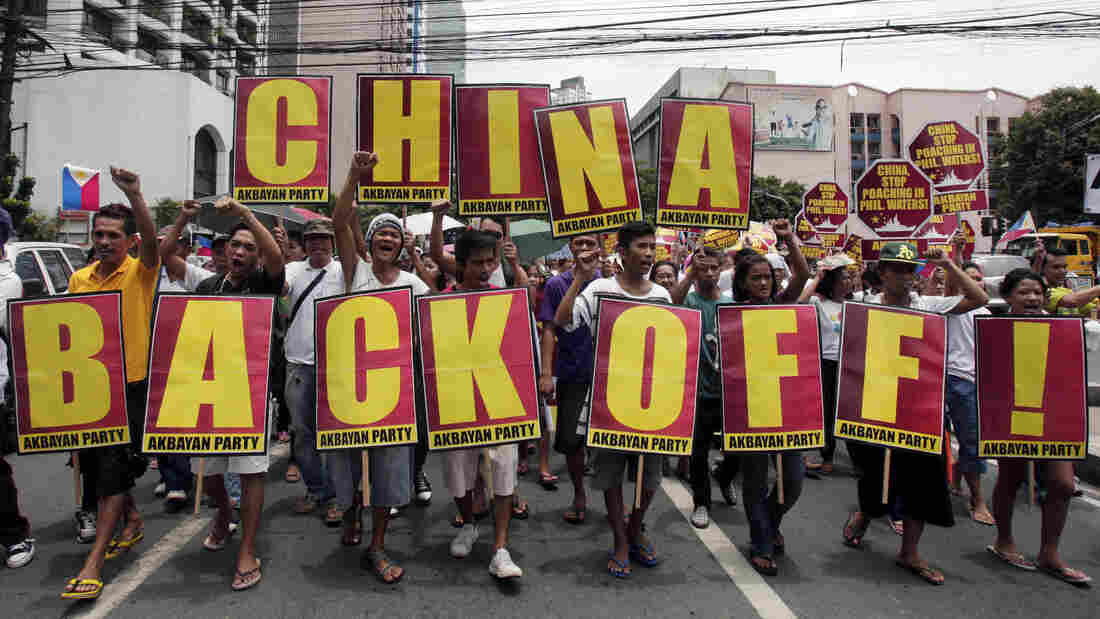 For the past two months, the Philippines and China have been locked in a standoff over territory in the South China Sea that both countries claim.The Philippine navy accused Chinese boats of fishing illegally in the area. Protesters in the Philippines are shown here marching in Manila earlier this month. Pat Roque/AP hide caption

Back in early April, a Philippine navy frigate tried to arrest Chinese fishermen accused of poaching sharks and giant clams.

But more is at stake than a boatload of seafood.

Neighboring countries say confrontations like this are growing as China asserts claims to territory well beyond its coastline. And analysts think China is testing America's resolve in the region.

Philippine officials say China still has more than 30 boats in the contested area, which is widely known as Scarborough Shoal, though the Chinese call it Huangyan Island.

The confrontation over Scarborough Shoal is part of a broader trend in recent years, with more and more Chinese vessels sailing closer and closer to the Philippine mainland, says Lt. Gen. Juancho Sabban, who runs the Philippine armed forces' Western Command. 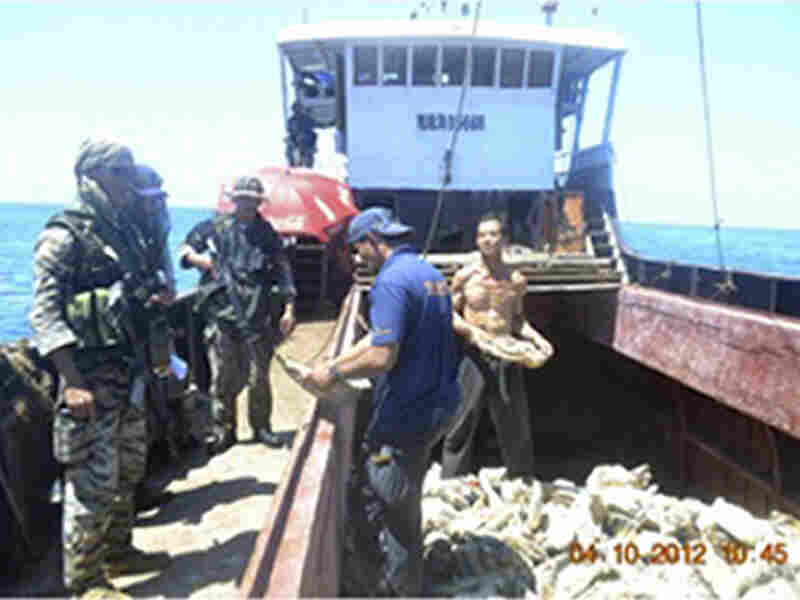 Filipino naval personnel look at giant clam shells onboard a Chinese fishing vessel at the disputed Scarborough Shoal in the South China Sea last month. Both countries claim the area, but say they are seeking a diplomatic solution. Philippine Navy/AP hide caption 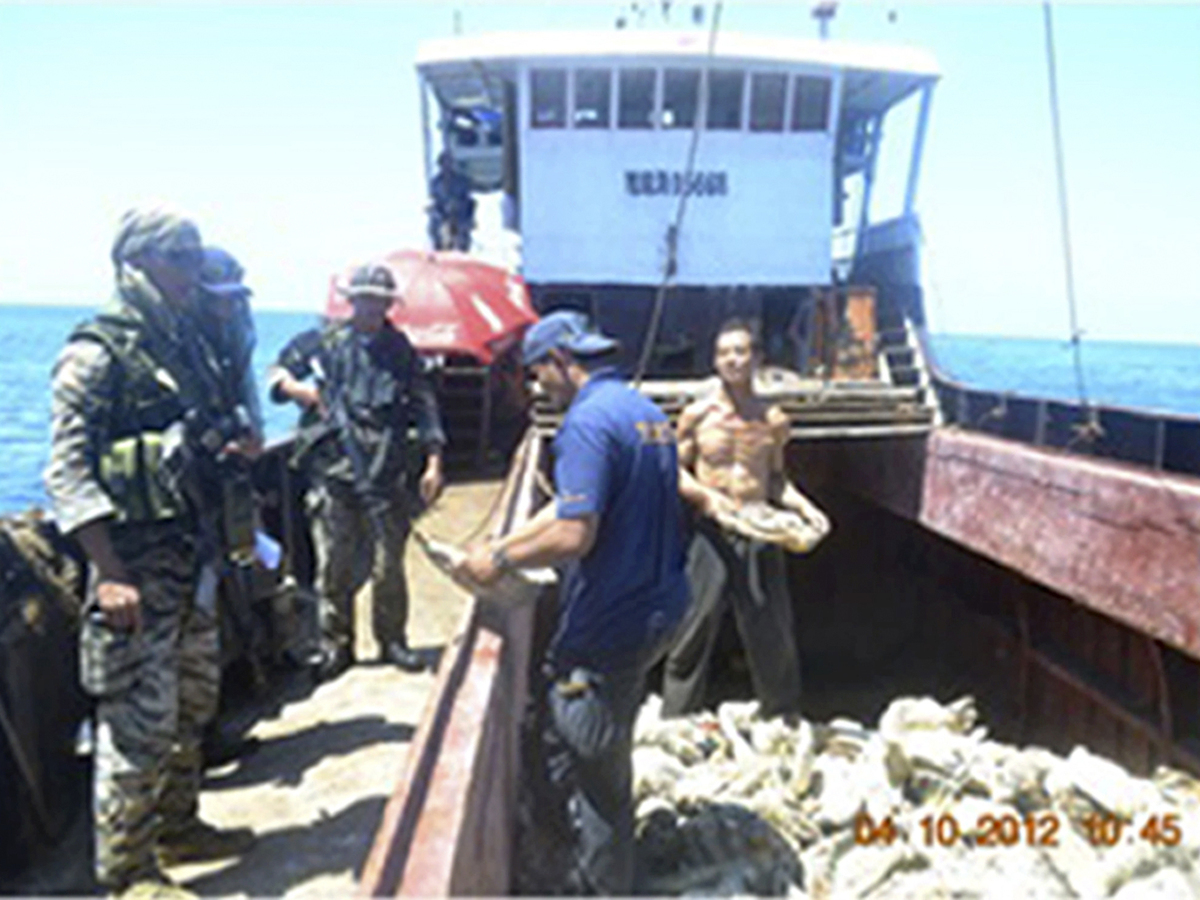 Filipino naval personnel look at giant clam shells onboard a Chinese fishing vessel at the disputed Scarborough Shoal in the South China Sea last month. Both countries claim the area, but say they are seeking a diplomatic solution.

"Before, we only used to see transport vessels; now, we can only see frigates," says Sabban. The reason, he adds, is that the South China Sea contains oil and gas.

A Competition For Resources

China, the Philippines and other Southeast Asian nations are looking to extract as much as they can, and militarily, China is in the strongest position. The country's rapid economic growth has allowed the government to invest heavily in its navy.

"China has been building up its armed forces. This has caused alarm in the region, especially to the smaller countries," Sabban says.

Shen Dingli, a professor of international relations at Fudan University in Shanghai, says China has claimed most of the South China Sea for decades.

"We are not asking for more; we are defending what we claimed since 1947," Shen says.

What China's neighbors see as muscle flexing, he adds, is just a long overdue enforcement of old Chinese claims.

China has been building up its armed forces. This has caused alarm in the region, especially to the smaller countries.

"Now, we are more able to police our traditional, sovereign water. We will be more able to dispel the aggressive behavior of Vietnam and the Philippines," he says.

Stephanie Kleine-Ahlbrandt, who runs the International Crisis Group's office in Beijing, says, "China actually feels like a victim, to a certain extent."

And this attitude, she says, is potentially dangerous.

"Because when you're a large country, like China, that all the neighboring countries around you are afraid of, then it sets you up for all sorts of potential disputes in the future," says Kleine-Ahlbrandt, whose group is an independent organization that tries to prevent and resolve deadly conflict around the globe.

They include, she says, the Chinese navy, which has used disputes to help boost its budget. There are also state-owned oil companies and local governments, which encourage fishing fleets to sail farther to boost their catches.

"It's not a monolithic, unitary China ... so much as all of these very powerful actors that have an interest in having a more assertive approach to the issue," she says.

A Challenge For The U.S.

Aaron Friedberg, who teaches international relations at Princeton, says he sees something additional at work: a quiet test of the United States.

"I'm afraid that one of the reasons for this more assertive Chinese behavior is that many people in Beijing have come to the conclusion, especially since the onset of the financial crisis, that the United States is in decline," says Friedberg, the author of A Contest for Supremacy: China, America and the Struggle for Mastery in Asia.

He says U.S allies in Southeast Asia will be watching this dispute and future ones to see if America is committed to the region.

"Which gives them some backbone in being able to stand up to Chinese demands, or, to the contrary, whether people come to the conclusion that we don't have the resolve, we don't have the resources, and that maybe, in the long run, we're not going to be around," he says. "I think that's very much an open question in the minds of many people in the region right now."

The U.S. has a mutual defense treaty with the Philippines. Secretary of State Hillary Clinton has said she views the Scarborough Shoal standoff with deep concern, and has called Chinese claims excessive.

But she has also said the U.S. is not taking sides.