Accessibility links
For U.S. Troops, One More Big Push In Afghanistan U.S. soldiers are trying to deal a crippling blow to the Taliban in the eastern Afghan province of Ghazni. It's one of the last major Taliban strongholds, but the American forces are trying to do the job on a short timetable. 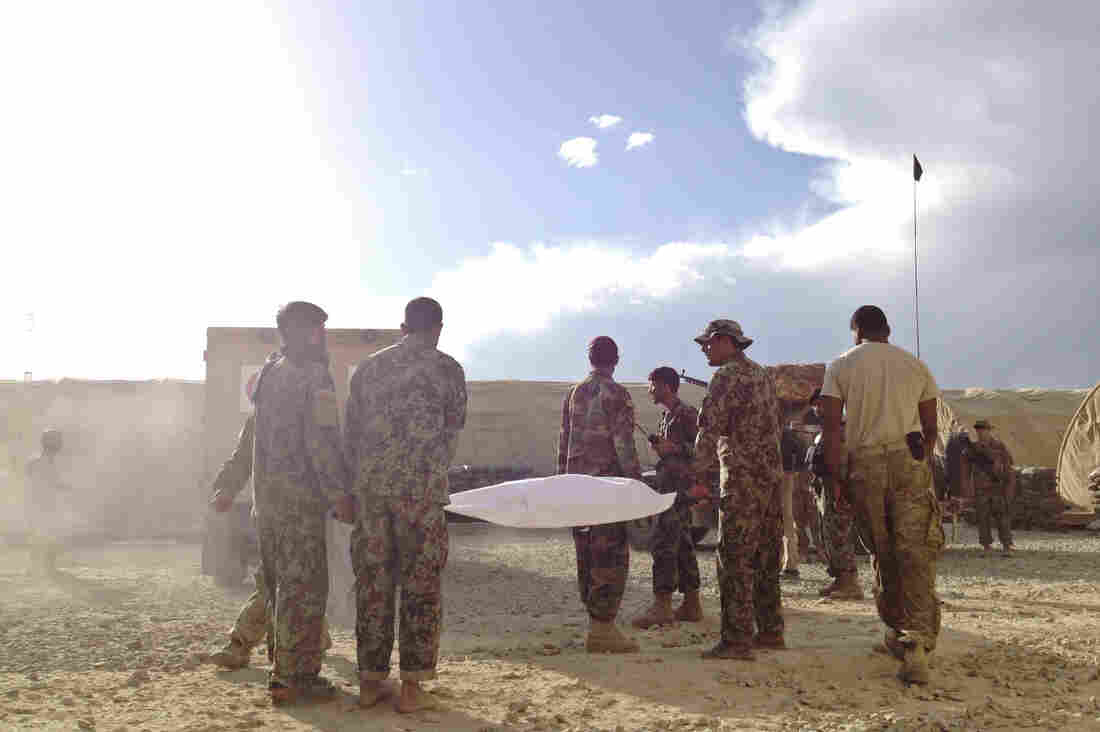 The body of Afghan soldier Burhan Muddin is carried to an ambulance in eastern Afghanistan's Ghazni province. He was shot while on guard duty at an Afghan army outpost near the U.S. base. He was brought to the Americans for medical treatment, but U.S. forces were unable to save him. Amy Walters/NPR hide caption

Several thousand soldiers from the 82nd Airborne Division are taking part in what is being called the last major combat offensive of the Afghan War.

Their task is to clear Ghazni province in eastern Afghanistan, a Taliban stronghold and a key prize because it straddles the major roads to Kabul and the insurgent supply routes into Pakistan.

But the American troops are challenged by a stubborn enemy and a short time to finish the job.

The first casualty happened before the mission even started: An Afghan army soldier, Burhan Muddin, was standing watch at his combat outpost when a Taliban gunman slipped out of a crowd and opened fire.

Three Afghan soldiers rushed him to a nearby American base, then struggled to carry him into a medical station. Doctors and nurses worked furiously but couldn't save him.

Muddin was just 25. His body was carefully wrapped in a white sheet and placed in an ambulance. His fellow soldiers embraced the Americans and wept.

Hours later, in the dead of night, some of the same soldiers were ready for the mission: an assault — along with American troops — on a village in Ghazni province. A Taliban stronghold, Bagi Kheyl is just 10 minutes away from their post by helicopter.

A long line of soldiers from the Afghan National Army, or ANA, bobs along in the pitch black. The occasional flashlight illuminates their dark eyes and bearded faces.

They're eager to avenge their friend.

"If I get any bad guy over there, I will kill him. Because they killed one of our guys," says one.

But it's about more than revenge: The Taliban hold sway in Ghazni province. They've killed dozens of Afghan troops. The Taliban lob mortars and rockets into the small American outposts. They intimidate the people in villages like Bagi Kheyl.

Just before getting on his helicopter for the night mission, Capt. Jared Larpenteur, Delta Company commander, stood in front of a map and described the challenge posed by the Taliban.

"They're coming from Pakistan and [Afghanistan's] Paktika province with their men, weapons and equipment across the pass. And there's a lot of safe havens in here that they're using to stage and move their logistical supplies north and south," he explains.

Highway 1, the country's only main road, travels north to Kabul and south to Kandahar. Ghazni is crucial because it straddles the Taliban's supply lines.

But when the Americans sent thousands more troops to Afghanistan, they didn't come to the area — until now.

Before the Americans arrived just a couple of months ago, a Polish brigade handled security there. But the Poles, says Larpenteur, only served as something of a highway patrol.

"The Polish mostly when they were here stayed on Highway 1 and never really got off Highway 1 into the villages at all. The villages haven't seen any type of ANA or U.S. forces in over five years," he says. "We went to one village out here, and they thought we were Russians."

It's in these villages that the Taliban stockpile their weapons and bomb-making materials. Each time Larpenteur and his men head out, they are met with gunfire or come across roadside bombs. 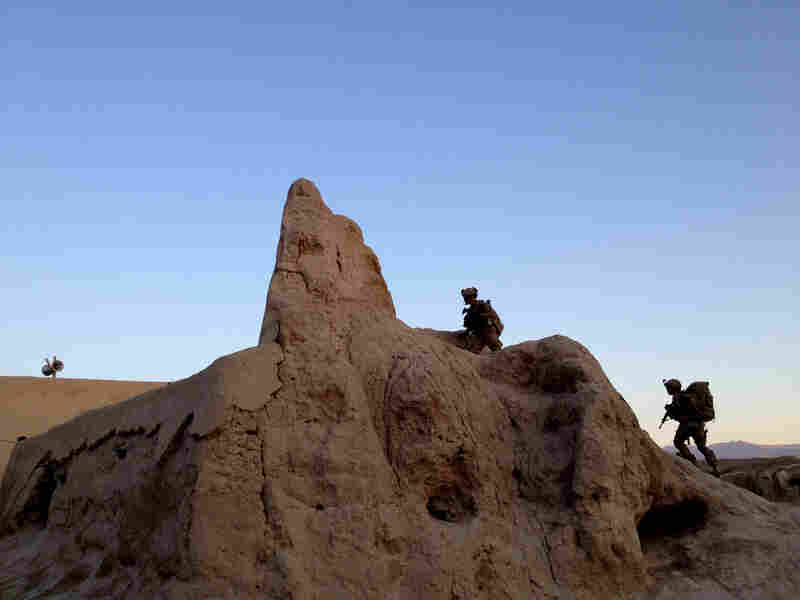 Bagi Kheyl, in the eastern province of Ghazni, is one of the villages where the 82nd Airborne has been operating as part of a broader effort to drive away the Taliban. Amy Walters/NPR hide caption 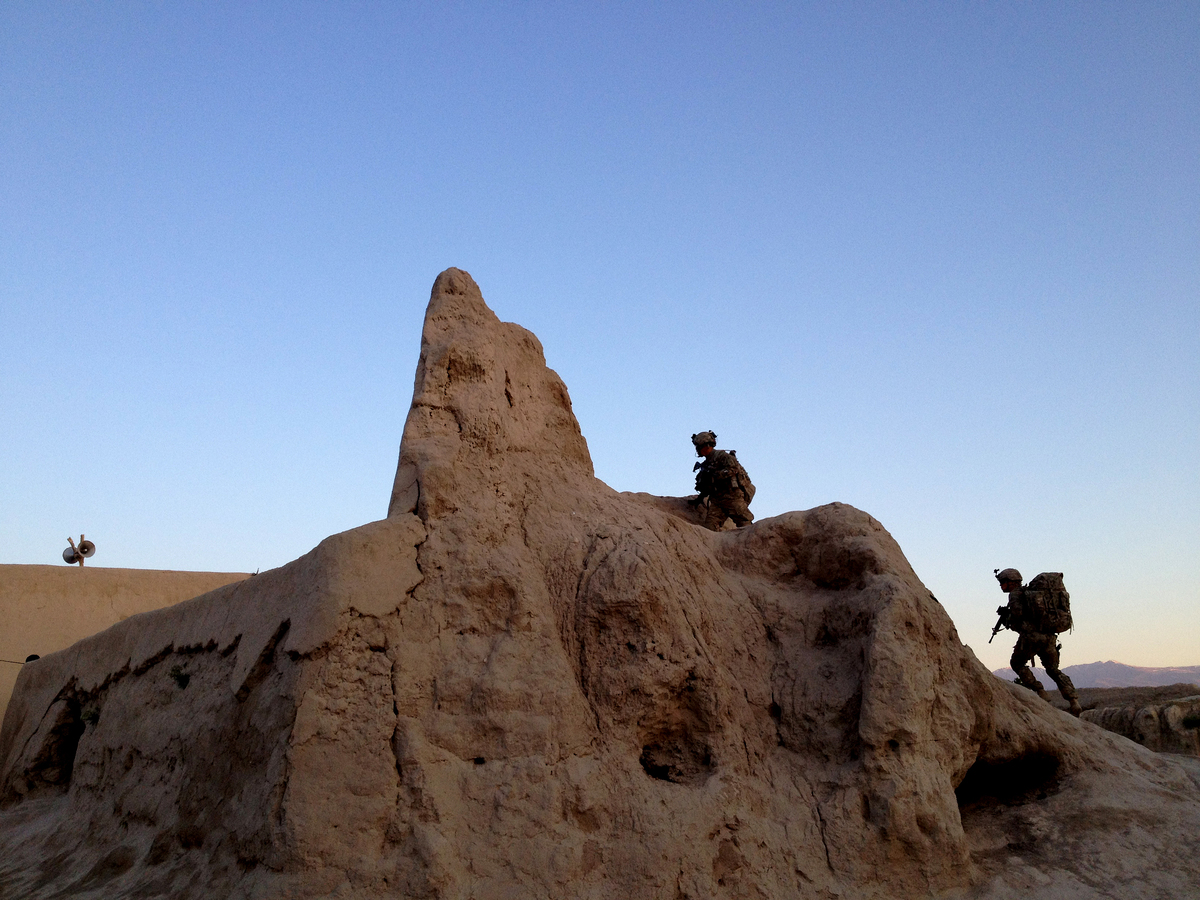 Bagi Kheyl, in the eastern province of Ghazni, is one of the villages where the 82nd Airborne has been operating as part of a broader effort to drive away the Taliban.

Seven soldiers from his brigade already have been killed. Many others have been wounded. And on a recent night — they're expecting to go up against the Taliban again.

Massive helicopters lift off in the darkness, stuffed with Delta Company's soldiers and their Afghan partners.

Minutes later they land in a field and pour out into the swirling dust.

The soldiers regroup, and for the next hour move quietly toward the village of Bagi Kheyl, arriving just as the eastern sky begins to glow.

The soldiers walk through the mud-walled village, single-file on each side of the dirt road. Village men — most of them over 50 — emerge from their compounds. They watch the intruders, standing and staring.

The soldiers question some of the men. One of them talks about how the Taliban infiltrate the village. They slip in on motorcycles or come in at night in small groups, he says. They ask for food, a place to stay. They take over the mosque and broadcast a warning.

"Whenever the Taliban come in here, in this village, they are calling on the loudspeakers of the mosque. If anybody talks to the ANA guys or American guys, I can cut your head," the villager says.

The mission continues. The soldiers fan out. The Americans instruct the Afghan soldiers to search a mosque, which only Afghans are permitted to enter.

The search turns up rocket-propelled grenades hidden in a wall, along with bomb-making components inside a coffin. The soldiers also find rifles and radios. 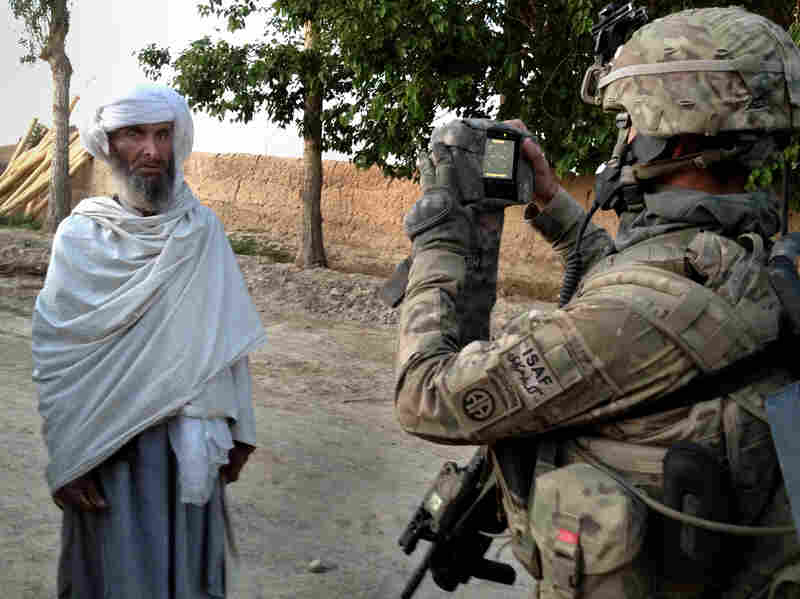 U.S. soldiers arrive early in the morning in the eastern village of Bagi Kheyl in an effort to surprise any potential Taliban. They walk through the village, taking down residents' information and searching for signs of the Taliban. Amy Walters/NPR hide caption 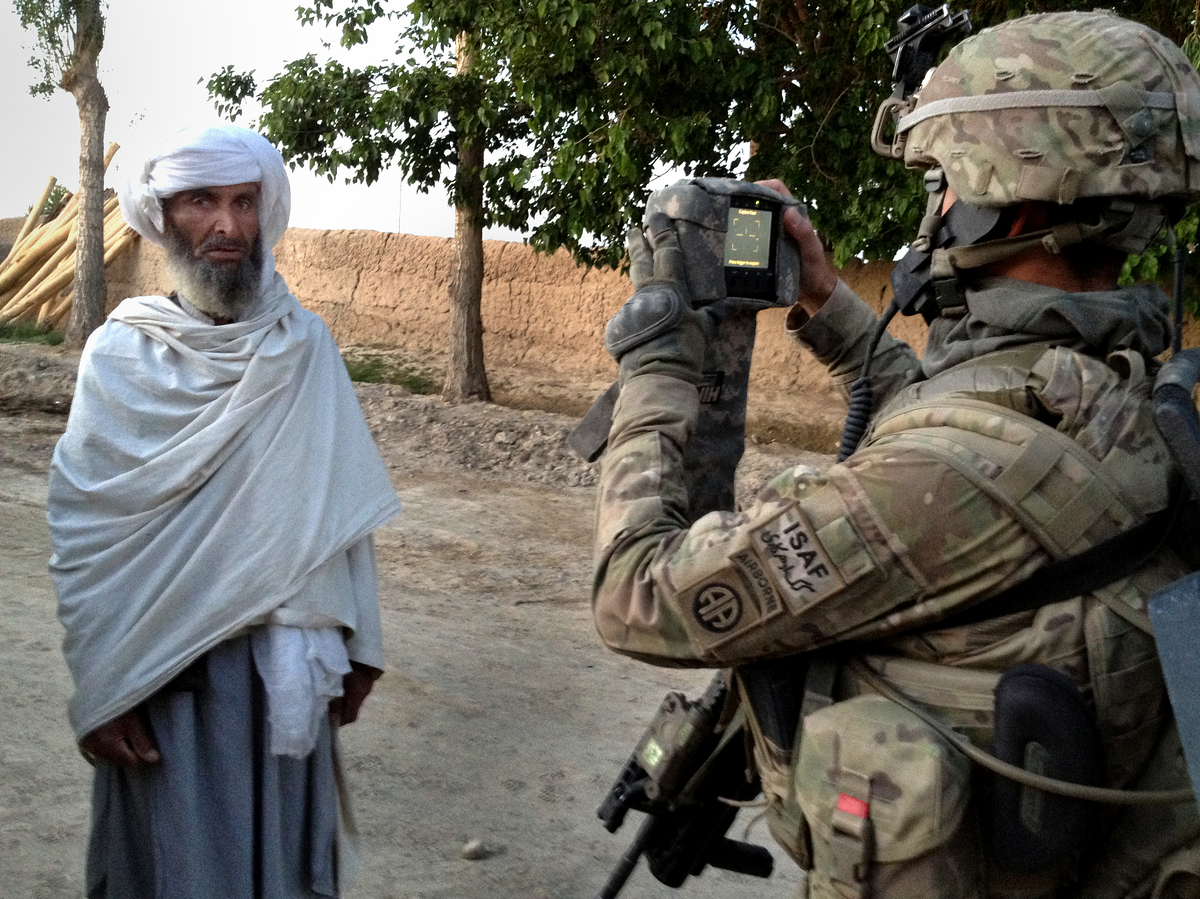 U.S. soldiers arrive early in the morning in the eastern village of Bagi Kheyl in an effort to surprise any potential Taliban. They walk through the village, taking down residents' information and searching for signs of the Taliban.

The equipment is gathered in a pile and destroyed with American explosives. Another cache is found, piled up and destroyed.

Fourteen hours later, the mission is over. There were no Taliban. Still, Enayat Halakeyar, an Afghan sergeant, is pleased.

It's been one more day in the war in Afghanistan. One village searched — out of a countless number spread across Ghazni province and the country.

The Afghan and American soldiers head back to base under a blazing sun. There are no helicopters now. They'll trudge the five miles through fields and villages. They worry the Taliban are watching. Most patrols come under fire when they leave a village.

But they make it back safely to their base, which is rimmed with razor wire, sandbagged walls and guard towers.

These soldiers from Fort Bragg, N.C., will spend another four months in the same routine. But they don't have much time to clear this Taliban stronghold.

The officer in charge of the mission is Col. Mark Stock. He sits in his office in a long, plywood building at a base called Warrior.

"At the end of the day, it's not going to be our success, it's going to be the Afghans' success," Stock says.

When he leaves in September, a smaller American combat unit will replace his soldiers, along with training teams to help the struggling Afghan forces.

"What keeps me up at night is how we transition this, and part of that transition is us backing off and enabling our partners to do it without us and still be successful," he says.

Across a dirt road from the colonel's headquarters sit the remains of an old British fort, its 20-foot walls worn like a sandcastle at the beach. The fortress dates back to the mid-19th century — another time when other English-speaking soldiers tried to make a difference in Afghanistan.