Accessibility links
Weekly Standard: Wisconsin's Expensive Tantrum On June 5 Wisconsin Governor Scott Walker will face Milwaukee Mayor Tom Barrett in a recall election. Stephen F. Hayes of The Weekly Standard says the election is a farce — and an expensive on at that. 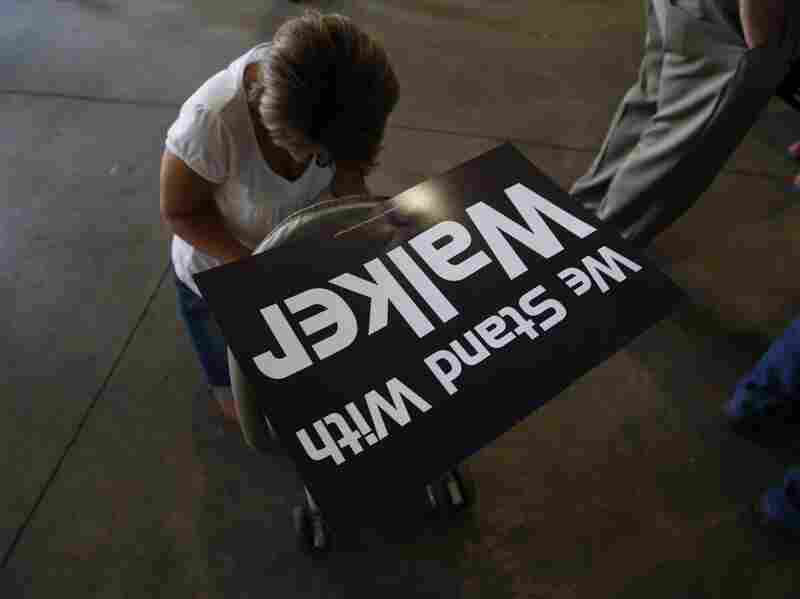 Supporters attend a rally for Republican Wisconsin Gov. Scott Walker as he campaigns along with Louisiana Gov. Bobby Jindal at the Waukesha Victory Center on May 24, 2012 in Waukesha, Wisconsin. Darren Hauck/Getty Images hide caption 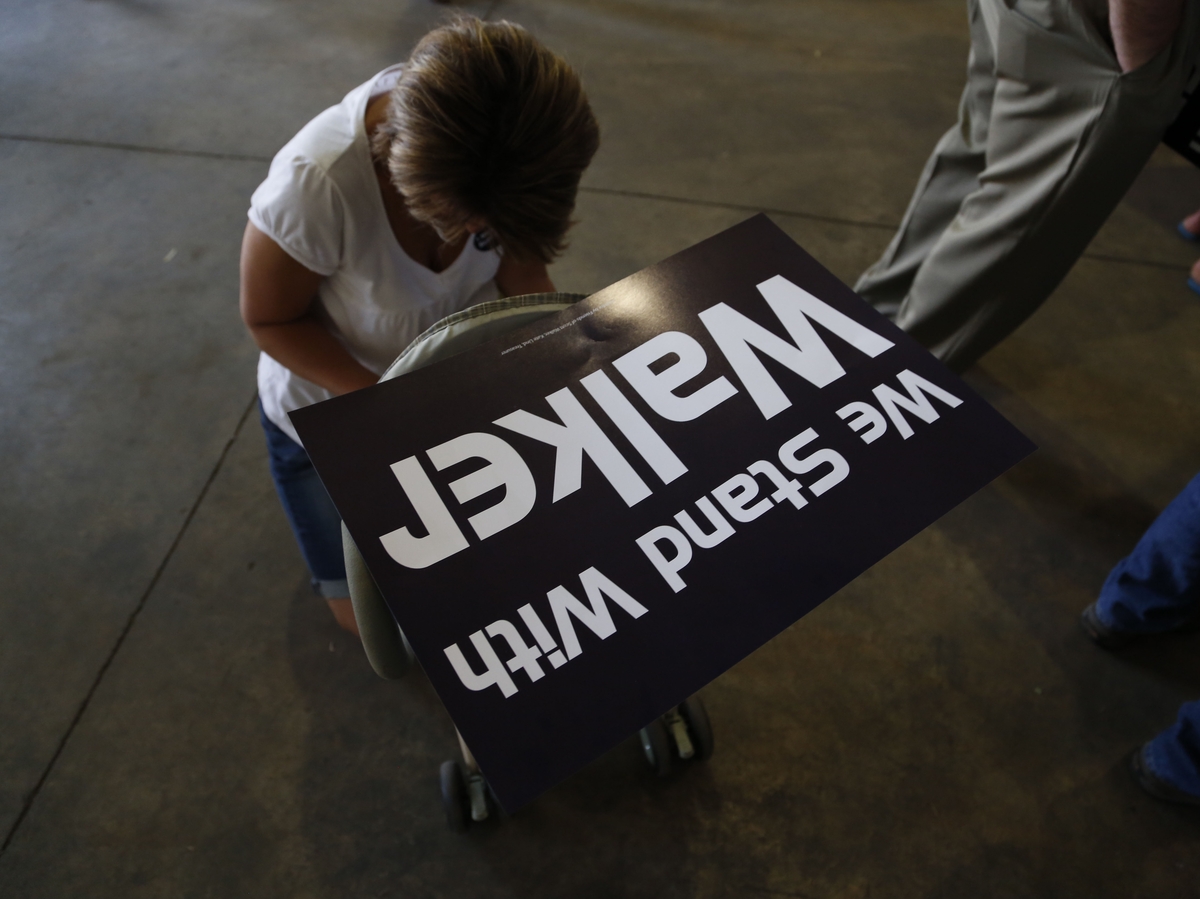 Supporters attend a rally for Republican Wisconsin Gov. Scott Walker as he campaigns along with Louisiana Gov. Bobby Jindal at the Waukesha Victory Center on May 24, 2012 in Waukesha, Wisconsin.

Read Another Opinion About The Wisconsin Recall Election

"This is what democracy looks like." That was the boast of protesters occupying the Wisconsin state capitol 16 months ago as they blocked Republican lawmakers from entering the legislature and celebrated Democratic state senators who had fled the state to avoid a vote on Governor Scott Walker's budget reforms. So in some respects it's fitting that a process launched in the intellectual incoherence of those early days will end with an election to recall an official whose offense is doing as governor the things he promised as a candidate he'd do. This is not, of course, what democracy looks like — at least not what it ought to look like.

The Wisconsin recall is a farce — a childish, union-sponsored tantrum that will cost the state's taxpayers an estimated $18 million. Perhaps the greatest irony is that Democrats rarely discuss its ostensible cause: collective bargaining. Tom Barrett, the mayor of Milwaukee who is seeking to replace Walker, did not use the phrase in the speech he gave celebrating his victory in the Democratic primary earlier this month. Graeme Zielinski, spokesman for the Wisconsin Democratic party, told Mother Jones: "Collective bargaining is not moving people." A recent poll of Wisconsin Democrats found that just 12 percent of those surveyed said "restoring collective bargaining rights of public employees" was the most important reason to remove Walker, well behind three other choices.

There's a reason the governor's reforms have gone from being the center of the anti-Walker movement to a talking point to be avoided. They've worked. Walker took office with a projected deficit of $3.6 billion, and in two years he's erased it. The Wisconsin Department of Revenue projected last month that the state will have a budget surplus of $154 million by the summer of 2013.

In addition, the reforms brought an end to forced union membership. This means that public employees can opt out of the union and stop paying its dues. A teacher in, say, the suburbs of Madison who opts out will bring home an additional $1,100 a year.

So public employee unions now have to persuade — not compel — people to join their ranks. That argument becomes especially difficult without collective bargaining. If the union no longer has the power to win gold-plated pension and health benefits, why would the average teacher choose to spend a chunk of his or her earnings to become a member? Without that misbegotten money, public employee unions lose their power. There's a reason public sector unions are fighting as if their existence depends on this. It might.

One sign that Wisconsin governor Scott Walker is likely to win the election on June 5 is the sudden disappearance of national media attention to the race. The networks and newspapers that gave wall-to-wall coverage to protests in the streets of Madison in the spring of 2011 and excitedly reported on the drive to collect signatures to force a recall have gone relatively quiet as a succession of polls show Walker leading by 5 points or more. State Democrats are complaining that national Democrats aren't devoting the time and resources necessary to defeat Walker; national Democrats are whispering to reporters that they'd warned their Wisconsin counterparts against a costly recall effort. David Axelrod has made comments in recent days downplaying the significance of the recall beyond Wisconsin. Obama himself, who once promised to walk the picket lines with his union backers when their interests were threatened, seems to want no part of the recall — or at least not a high-profile part.

Scott Walker understood that if he were going to accomplish big things, he'd need to start early. He learned that lesson from watching two of his good friends — Governors Mitch Daniels and Chris Christie — fight to bring much-needed reform to their states. The changes were often unpopular at first. Daniels was elected governor of Indiana in 2004 with 53 percent of the vote, but two years later, after he began implementing an aggressive reform agenda, his support had dropped to 37 percent. Yet he won reelection handily in 2008, and in recent months, as the effectiveness of his continuing reforms has become obvious, his approval rating has risen as high as 70 percent. Christie followed the same model in New Jersey, and his approval ratings have traced a similar trajectory — though without the dramatic highs and lows of Daniels.

Walker hopes to follow that path. He defeated Barrett by 52 to 47 percent in 2010, and he says he thinks the results on June 5 will show that "voters are willing to stand with people who make tough choices." A win would say that — and a 2010-level margin over Barrett would shout it. On, Wisconsin!