Accessibility links
Obama's Own Story Defines His American Dream From the moment he burst on the national scene, Barack Obama has served as a living example of the American dream — proof that in this country, anyone can succeed. But what sets him and other Democrats apart from Republicans is the idea of the American dream as a collective enterprise. 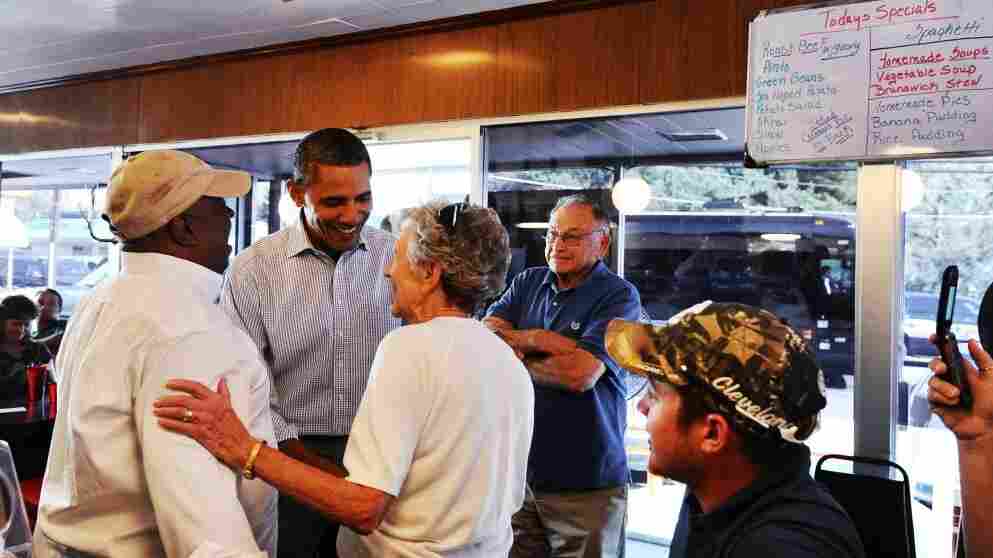 President Obama greets diners at Reid's House Restaurant in Reidsville, N.C., last fall. While there, he talked to a college student about the importance of education — one of the ideas Obama comes back to often. Jewel Samad/AFP/Getty Images hide caption 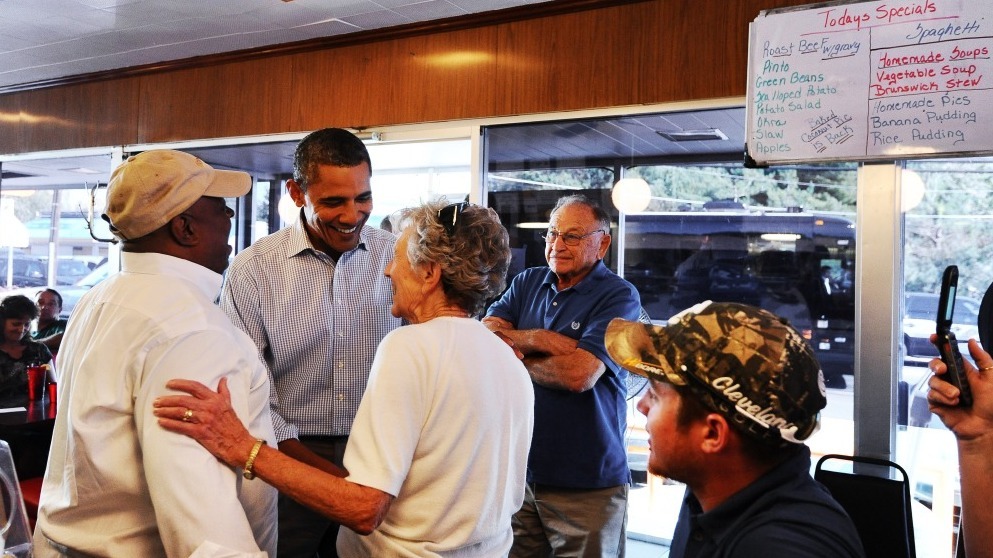 President Obama greets diners at Reid's House Restaurant in Reidsville, N.C., last fall. While there, he talked to a college student about the importance of education — one of the ideas Obama comes back to often.

NPR is examining what the American dream means to our culture, our economy and our politics. On Morning Edition, we'll explore what Republicans think of the American dream. In this installment, the view from President Obama.

The American dream — the idea that in this country anyone can rise from humble beginnings and succeed — is deeply woven into our national psyche. It's a promise that draws immigrants to our shores. And it's a staple on the campaign trail.

On a campaign-style bus tour last fall, rolling through cotton fields and tobacco farms, President Obama stopped for a cheeseburger and sweet tea in the town of Reidsville, N.C. Shaking hands with a crowd outside the restaurant, Obama paused to offer some fatherly advice to college student Desmond McCowan.

"Study hard," said the president, whose own mother used to wake him up early to do just that. The idea that hard work and education pays off is one that Obama often conveys, in words and through his own biography.

We Want To Know: What Is Your American Dream?

From the moment he burst on the national scene at the 2004 Democratic convention, Obama has served as a living example of the American dream — proof that in this country anyone can succeed, even a skinny black kid with a funny name.

"I stand here knowing that my story is part of the larger American story. That I owe a debt to all of those who came before me," he said. "And that in no other country on Earth is my story even possible."

Obama was quick to add that his story is not one of solo success.

"Alongside our famous individualism," he said, "there's another ingredient in the American saga — a belief that we're all connected as one people."

He made that point again this year in a speech at the University of Michigan. "Everybody here is only here because somebody somewhere down the road decided, we're going to think not just about ourselves but about the future. We've got responsibilities — yes to ourselves, but also to each other."

The Role Of Government

This idea of the American dream as a collective enterprise is what sets Democrats apart from Republicans.

"If you look at three basic values that underpin the American dream," says John Kenneth White, a political scientist and editor of The American Dream in the 21st Century, "they really are freedom, individual rights — which are closely tied to that — and equality of opportunity."

Republicans typically stress freedom, White says, and they tend to see government as a likely impediment.

Democrats like Obama focus on opportunity, and they see a vital role for government.

"Somebody who has a great idea in selling a great product or service, we want them to get rich. That's great. But we also want to make sure that we as a society are investing in that young kid who comes from a poor family who has incredible talent and might be able to get rich as well," Obama has said. "And that means we've got to build good schools. And we've got to make sure that that child can go to college."

Letreace Grisby, who attended an Obama rally in Virginia this month, likes the idea of the American dream as a cooperative effort.

"I don't believe anyone is self-made. God put us here. Why not teach, especially these young people, how they can make a better life for themselves?" she says. "Especially if they were not born in the 1 percent."

Obama seems mindful that his own story could have turned out differently, and he's been determined to hold doors open for others. He says doing so is good for the country.

"I think the history of the United States, the reason we became an economic superpower is because, not always perfectly, not always consistently, but better than any other country on Earth, we were able to give opportunity to everybody," he said. "That's what the American dream was all about."

Obama says preserving that dream requires a balancing act between self-interest and community. Success is not an entitlement in his book. But neither is it a reward for individual effort alone.