Accessibility links
Movie Review - 'Pink Ribbons, Inc.' - Tied Up With More Than Hope A documentary on "breast-cancer culture" critiques the pink-ribbon movement, questioning its corporate links and its dubious results record. Critic Mark Jenkins says the film is unapologetically provocative, yet far from a definitive take.

'Pink Ribbons,' Tied Up With More Than Hope

'Pink Ribbons,' Tied Up With More Than Hope 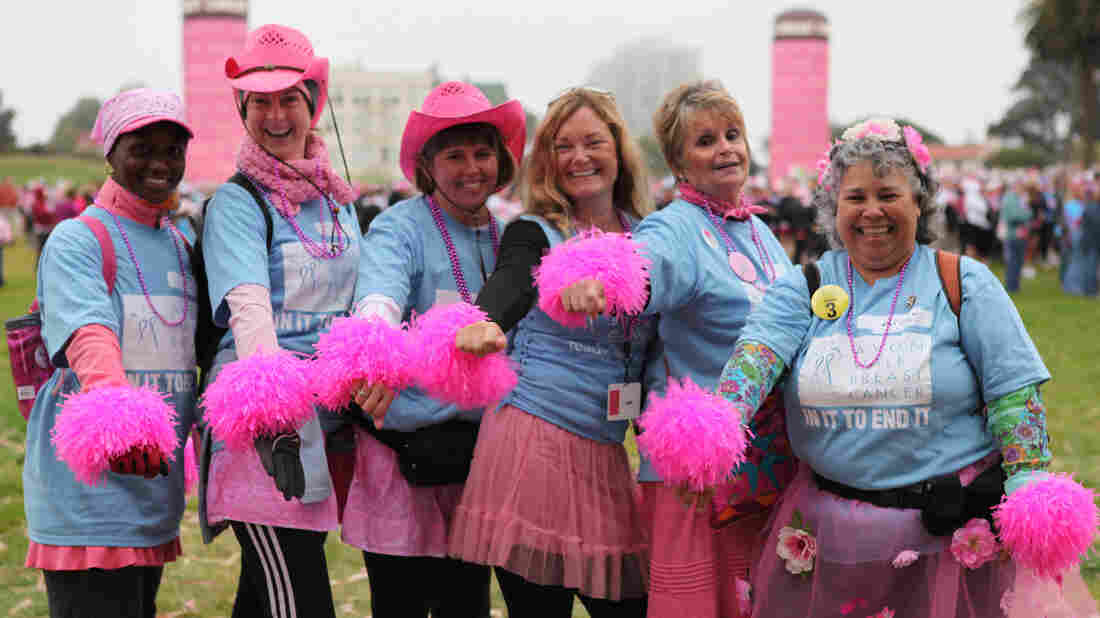 Not rated; discussions of cancer and death

Provocative yet far from definitive, Pink Ribbons, Inc. is a critique of "breast-cancer culture." It could even be called a blitz on pink-ribbon charities and their corporate partners — though to use that term would be to emulate the war and sports metaphors the documentary rejects.

As one woman observes, describing the treatment of cancer as a "fight" or a "battle" suggests that the disease is always beatable if patients make a heroic effort. The implication is that people who die "weren't trying very hard."

Breast cancer is the most common form of cancer that afflicts mostly women. (A few men also get it.) That prevalence partially explains the rise of the pink-ribbon movement. But critics of the fund-raising campaigns argue that companies like Avon and Yoplait also are drawn to the breast-cancer cause by its, well, pinkness. Heart disease and lung cancer just don't seem as feminine.

Canadian director Lea Pool, who's best known for such fiction features as Set Me Free, takes a scattershot approach. In addition to the interviews, she includes animated sequences, vintage clips from news programs and public-service announcements, and coverage of pink-ribbon events: walks "for the cure" in D.C. and San Francisco, a pink-lighted Niagara Falls and Empire State Building, a jump by "Aerial Pink Force" skydivers.

Objections to such stunts are partially a matter of taste; although the movie devotes much of its attention to more substantive issues, it takes a few minutes to protest pink-ribbon kitsch and "the tyranny of cheerfulness."

The principal witness for the defense is Nancy Brinker of Susan G. Komen for the Cure, who was interviewed before that group's controversial (and quickly canceled) break with Planned Parenthood. Brinker's group has channeled $1.9 billion to breast-cancer research. While that's an extraordinary number, the results are less impressive: Some 59,000 people die of the affliction in the United States annually, and the number of cases has dramatically increased, here and worldwide.

The disconnect between research and results is one of Pink Ribbons, Inc.'s keenest points. On-screen commentators contend that breast-cancer research is poorly coordinated and badly focused. Fewer than 30 percent of patients have a genetic proclivity for the illness, which indicates that most cases stem from environmental causes — yet relatively little attention is paid to prevention, or to chemicals that mimic estrogen and disrupt the human endocrine system.

Some of the pink-ribbon sponsors may even be implicated in rising cancer rates. Avon is a major supporter of the cause, yet certain cosmetics contain suspected cancer-causing agents. While encouraging customers to send in Yoplait lids in exchange for donations to breast-cancer research, the yogurt's manufacturer used milk that contained bovine growth hormone. (The substance, which is banned in many countries, was later eliminated.) The goal of such companies, allege their critics, is to "pinkwash" possibly carcinogenic products.

Such scientific arguments remain unresolved, and this unapologetically polemical documentary doesn't offer equal time for corporate viewpoints. But the movie's indignation seems justified on at least one point: that the pink-ribbon movement thus far has done more for marketing than for medicine.