Accessibility links
Movie Review - 'Snow White and the Huntsman' - Into The Woods, With Nary A Hi-Ho A dark new version of the Snow White story plays up the tale's bleaker, more brutal themes, and allows its heroine more agency than most tellings. Charlize Theron, Kristen Stewart and Chris Hemsworth star.

'Huntsman': Into The Woods, With Nary A Hi-Ho

'Huntsman': Into The Woods, With Nary A Hi-Ho 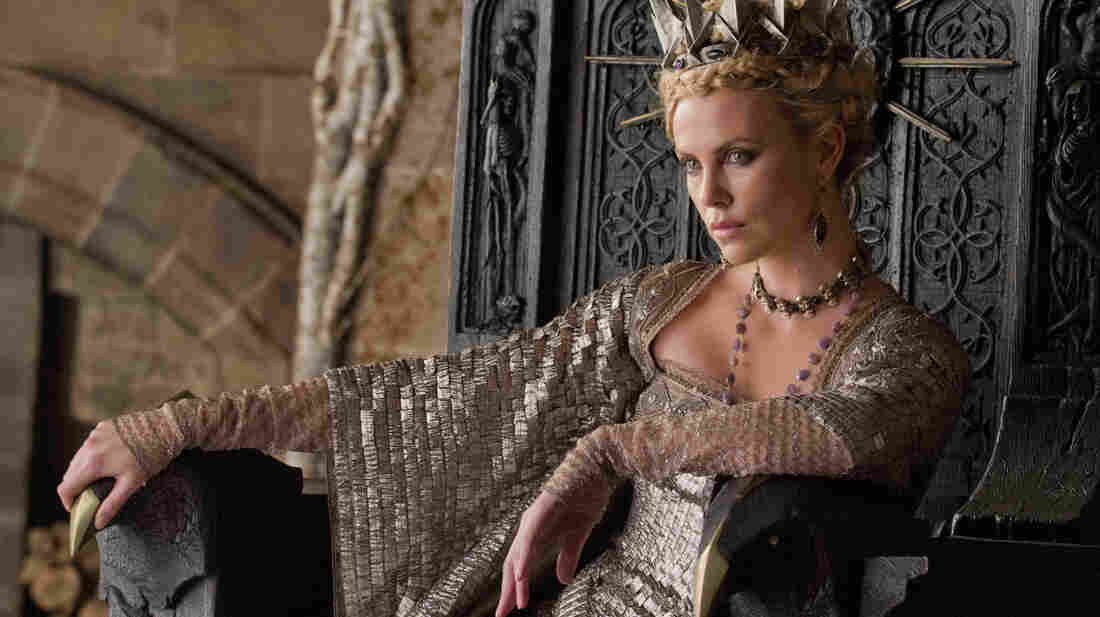 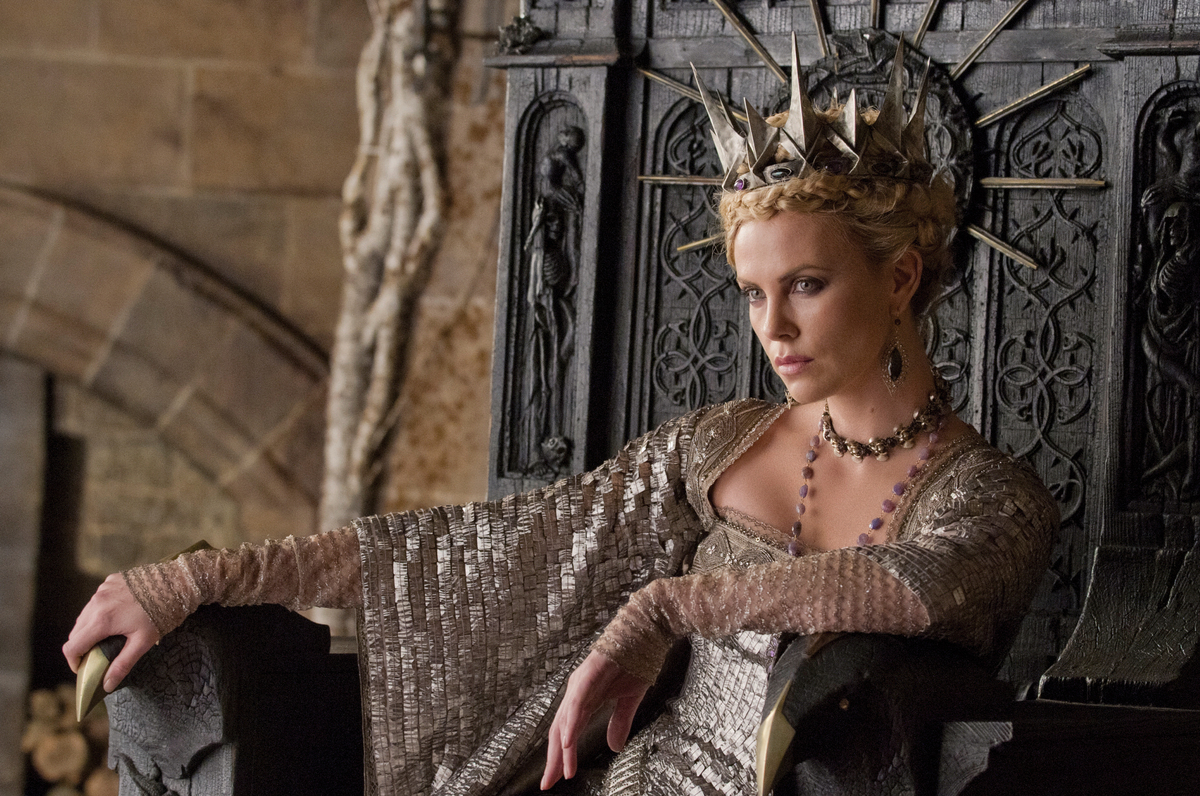 Dressed To Kill: Charlize Theron is a pointedly wicked Queen Ravenna in Snow White and the Huntsman.

Snow White
and the Huntsman

Rated PG-13 for intense sequences of violence and action, and brief sensuality

From 'Snow White and the Huntsman' - 'Huntsman'

From 'Snow White and the Huntsman' - 'Troll'

From 'Snow White and the Huntsman' - 'Enchanted Forest'

What Charlize Theron does for Snow White and The Huntsman in her role as the Wicked Queen is a bit like what Godzilla does for a Godzilla movie: She gives you something big and distracting to look at while a lot of thinly defined victims run around frantically trying to avoid a grisly death at her hand.

They've cast it with actors both well-regarded and popular: Aside from Theron as the Wicked Queen, Snow White herself is played by Kristen Stewart, an actress with considerable chops she's rarely had good opportunities to demonstrate, since she's spent so much of her career in the Twilight franchise. And the titular huntsman the queen sends to retrieve Snow White after she escapes from her tower is played by Chris Hemsworth, currently hammering things mightily as Thor in The Avengers.

The two are destined to get beyond the hunter and the hunted, though: Once they iron out their differences, they become allies in opposing the queen's attempts to eat Snow White's heart and become immortal. (You can see why S.W., in particular, would be against this.)

The first few minutes of the film, from first-time director Rupert Sanders, contain some lovely visuals, with intriguing uses of specific focus and a white-and-gray palette that promises something foreboding, something particularly spare and cold.

But quickly, that gives way to conventional melodramatic fantasy as we watch the queen yell, menace, glower and eat the hearts out of birds. She's accompanied by her sycophantic brother and right-hand man Finn (Sam Spruell), who, were the queen a Disney villainess, would be a right-hand parrot or lizard. He has, it must be said, about as many dimensions here as he would there.

Once the queen's wickedness is made manifest, however, and just when Theron's lusty devouring of a castle's worth of scenery begins to shift from impressive to tiresome, something even worse happens: She disappears from the movie. We then enter a long fallow period in which we wander around with Snow White, her huntsman, and eventually the seven dwarfs, who are not played by actual little people but by digitally altered actors including Ian McShane. They're followed around by the pasty and terrible Finn, as well as by Snow's well-meaning, personality-free childhood friend William (Sam Claflin), who serves no conceivable purpose in the story. 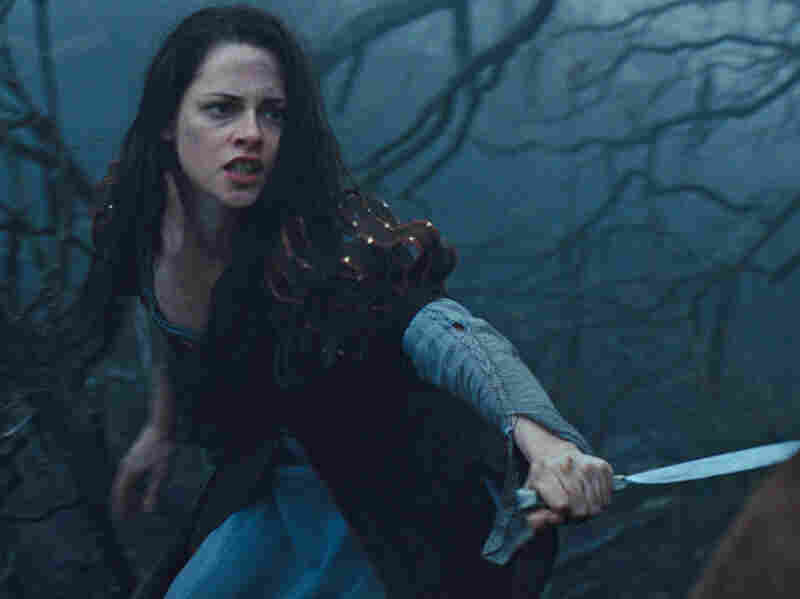 Having fled the tower, Kristen Stewart's Snow White teams up with the queen's huntsman and organizes a resistance. Universal Pictures hide caption 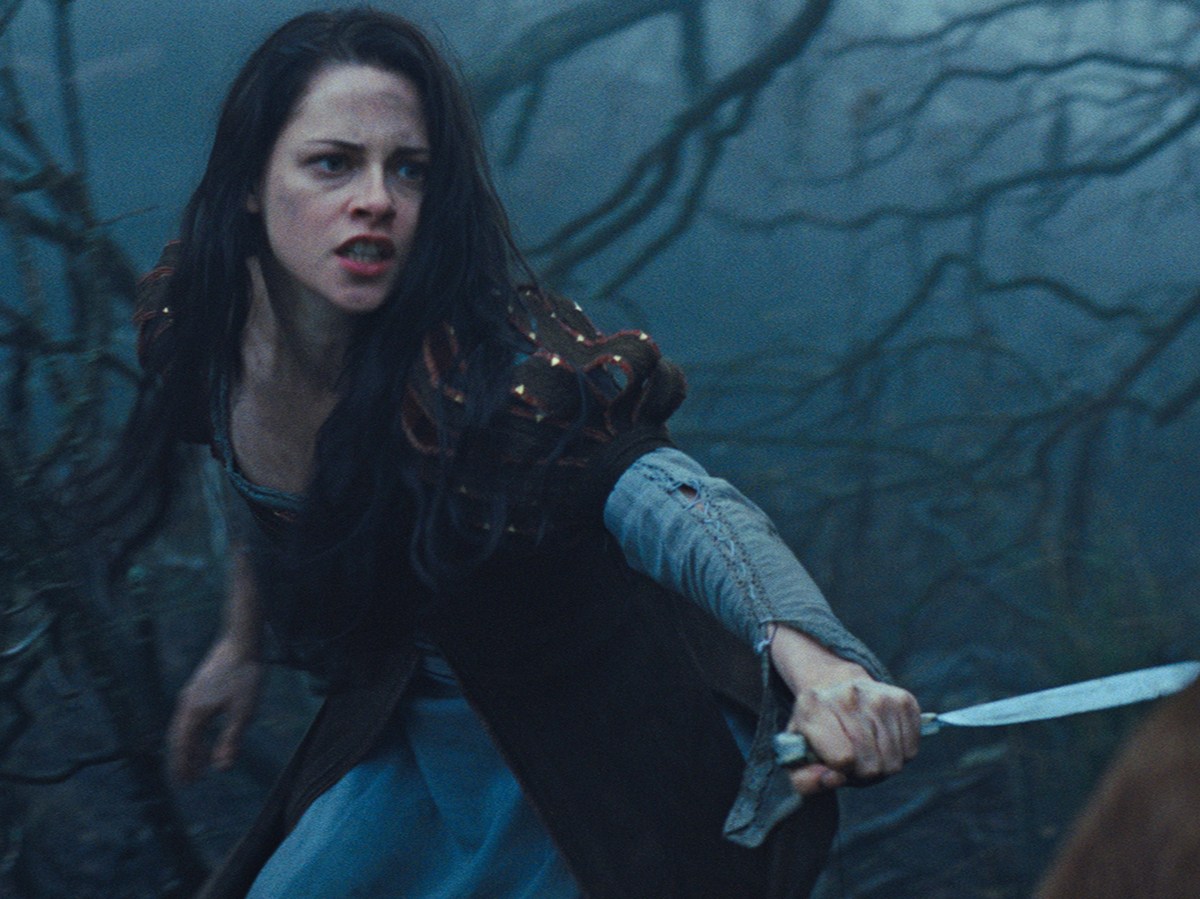 Having fled the tower, Kristen Stewart's Snow White teams up with the queen's huntsman and organizes a resistance.

There was great excitement when the early images from this film emerged, because it seemed that here was an active Snow White — a warrior, wearing armor, participating in battle rather than watching from a tower and awaiting rescue.

Unfortunately, that's the tail end of the story, and it comes after she, like so many fairy princesses before her, spends far too much of the proceedings doing almost nothing except being scared and pleading for help. (And, in one cringe-inducing sequence, pacifying a violent monster by gazing warmly upon it. Even monsters get crushes on her!) She does have the resourcefulness to escape in the first place, it's true, but even that escape requires a horse ex machina to appear, and after that Snow retreats into passivity and stays there until it's time for the final act.

What dooms Snow White and the Huntsman is ultimately not how over the top it is, but how dull it is. Stewart and Hemsworth have so little chemistry that any romantic undertones between them seem clumsily stapled to the story. (The film's PG-13 rating mentions "brief sensuality," so there must be some; when it occurs does not come immediately to mind, which is ominous in sensuality terms.) Moreover, once you've seen the queen bellow and roar, you've seen just about everything she does throughout, aside from CGI aging effects. Theron can be an actress of sublime subtlety, but this role shows off only her power and volume.

The idea of a dark Snow White is a sound one, and the idea of casting an actress with the strength of Theron to terrorize her is a sound one as well. But everyone involved needed a substantially better script — and a better eye for the difference between what would come off as loopy, creepy darkness and what would just make audiences sit in the theater thinking, "Did that guy just fight a bunch of birds with an ax? I'm almost sure he did."