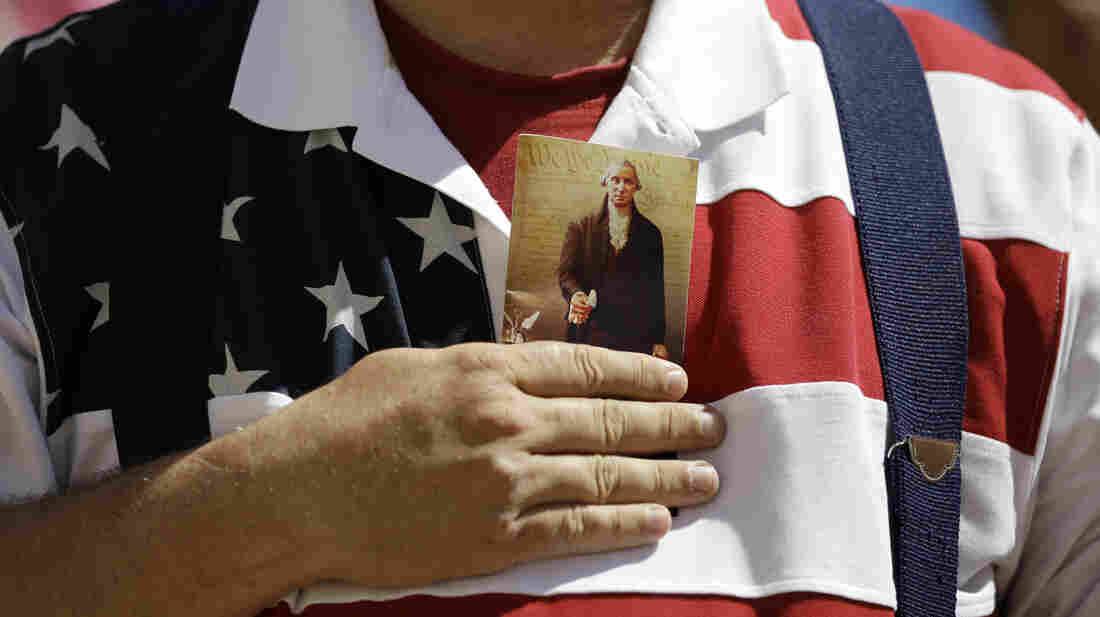 A demonstrator holds a copy of the U.S. Constitution to his chest as he attends a protest in downtown San Antonio on March 23. Eric Gay/AP hide caption 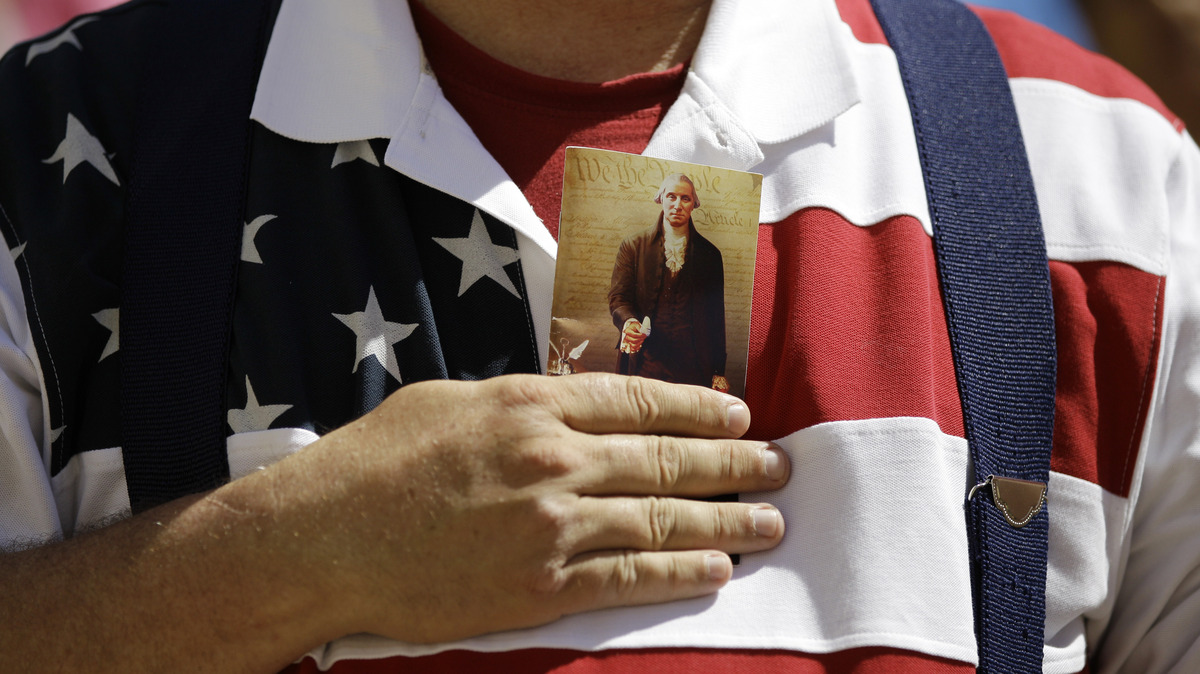 A demonstrator holds a copy of the U.S. Constitution to his chest as he attends a protest in downtown San Antonio on March 23.

NPR is exploring what the American dream means to our culture, our economy and our politics. On All Things Considered, we explored what President Obama and Democrats think of the American dream. In this installment, the Republican perspective.

President Obama and Republican presidential candidate Mitt Romney agree that the American dream is out of reach for too many people today. They disagree on how to fix the problem.

That's one of the fundamental tensions in this presidential campaign.

Sizing Up The American Dream

On the campaign trail, Romney's definition of the American dream sounds pretty universal: "If you're willing to take risk and work hard, get an education, have the right values, anyone can make a better life. We are the land of opportunity."

That's a definition Obama could get behind. The parties disagree more over how to make sure the American dream survives, and what to do when it disappears from places like Elyria, Ohio.

"It used to be a thriving area. It's not thriving anymore because people aren't working," says Pam Malcolm, who works as a cashier and is active in the Tea Party movement.

Tens of thousands of manufacturing jobs have left this part of Ohio. But Malcolm says if the government steps in to help, that will just make people sit back and stop trying. She says she sees the impact of government assistance every day.

"It's like they have a thousand dollars a month in food stamps. They have their nails done. They have really nice smartphones. And, you know, it's like here I am working my tail end off," she says. "I can't buy sushi. I can't buy filet mignon. I can't buy crab legs. ... It's just, it's very irritating."

In fact, the average person on food stamps in Ohio gets $140 a month, according to Kaiser State Health Facts. But even if her statistics are off, Malcolm's strongly held belief is that government aid removes motivation to pursue the American dream.

That's an idea deeply rooted in conservative ideology. Lee Edwards of the Heritage Foundation explains, using a quote from the 18th century philosopher Edmund Burke: "He said that we must depend and look to the 'little platoons' of life. And by that, he meant the family, community, church. So we're not just looking to ourselves, but we're looking for what surrounds us."

Like many conservatives, Edwards believes the best way to strengthen the American dream is by applying government assistance sparingly.

We Want To Know: What Is Your American Dream?

"If you look at all the temptations which we have today, with our welfare society, it's so very easy to say, 'I can only go so far, and then I can go no farther,' " he says.

"Unfortunately, the kind of tax policy this president has put forward the last few years really sort of penalizes success rather than incentivizing opportunity," Chen says. "And that is something that threatens the American dream fundamentally."

Romney says this is the difference between his model of an "opportunity society" and what he describes as Obama's vision of an "entitlement society." Both men think the rich should pay higher taxes than the poor. But they differ on how wide the gap should be.

Pollster Michael Dimock of the Pew Research Center says the American people are of two minds on this.

"People don't begrudge people who've gotten ahead by working hard," Dimock says. "We've asked that question for a quarter century, and you get about 80 percent saying they admire people who get rich by working hard. What they're frustrated with is the sense that the system isn't helping people fairly."

Of course, the definition of fairness varies, too. Conservatives say when the government puts its thumb on the scale, that's interfering with free markets. Liberals say the government has an important role as referee, making sure everyone plays by the same rules.

There is also a huge partisan divide right now in people's outlook about the strength of the American dream, Dimock says.

"Democrats [are] very optimistic about the country's future, even though they're not as optimistic that every individual has it in their power to get ahead," he says. "Republicans believe in that aspect of the American dream — that hard work will pay off — but they're very skeptical about the way the country is headed as a whole."

Dimock says that divide began when Obama took office, with Republicans becoming very downbeat about the direction of the country.

So when Romney says he will turn the country around, those opinion curves about the strength of the American dream may be part of what he's referring to.