Accessibility links
Movie Interview - Andrew Garfield Talks 'The Amazing Spider-Man' The actor, who's currently up for a Tony Award for the Broadway revival of Death of a Salesman, looks to be on the verge of stardom: In July, Garfield will play Peter Parker in one of the most anticipated movies of the summer, The Amazing Spider-Man. 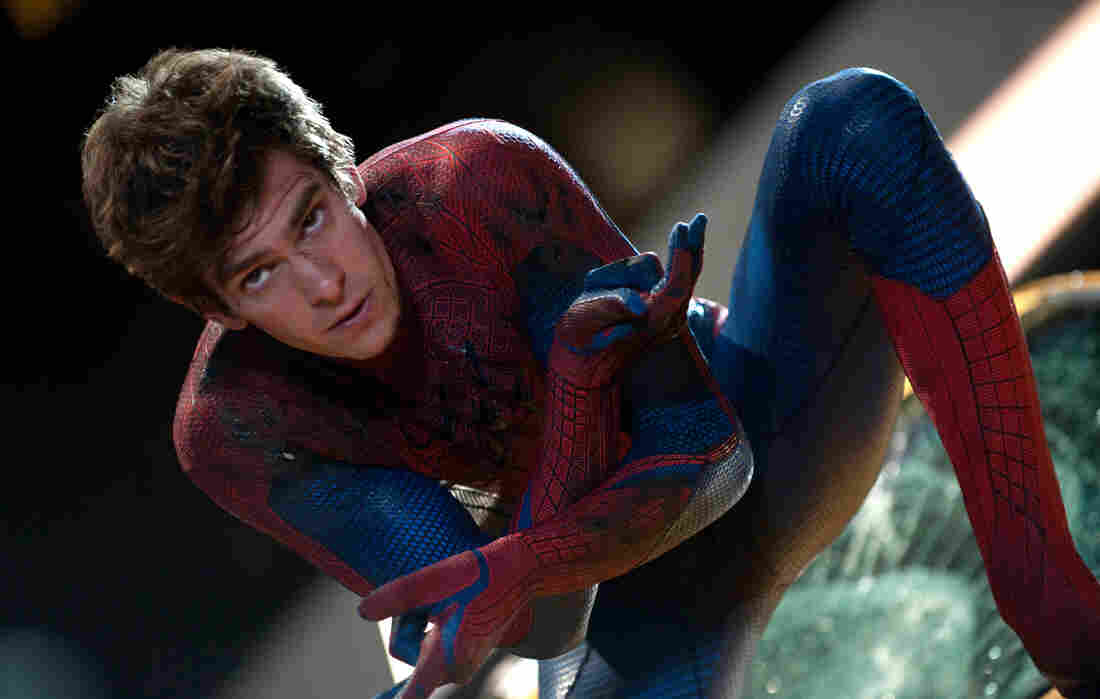 Andrew Garfield is an actor on the verge of superstardom — and he's only 28 years old.

Although Garfield may be best known to American audiences for playing Facebook co-founder Eduardo Saverin in The Social Network, Garfield started acting in England, where he grew up. There, Garfield made notable turns in the critically acclaimed Red Riding Trilogy as well as in Never Let Me Go, based on the novel by Kazuo Ishiguro.

Now Garfield is nominated for a Tony Award for his role as Biff Loman in a Broadway revival of Death of a Salesman that also stars Philip Seymour Hoffman.

And this summer, Garfield dons a very famous red-and-blue suit in the reboot of one of the biggest movie franchises of all time: He's playing Peter Parker in The Amazing Spider-Man. As Garfield tells Morning Edition's David Greene, he's taking a serious approach to what many consider a summer "popcorn" movie.

"When you really look at the reality of ... Peter Parker's life and the stuff that he goes through," Garfield says, "it's a pretty serious set of circumstances that he finds himself in.

"If you really look at the idea of being bitten by a radioactive spider, and what that would mean to a 17-year-old boy going through adolescence, and attempting to find out the truth about the abandonment by his father ... and falling in love for the first time, and then there's a giant mutant lizard he discovers — it's too much for anyone, let alone a 17-year-old kid." 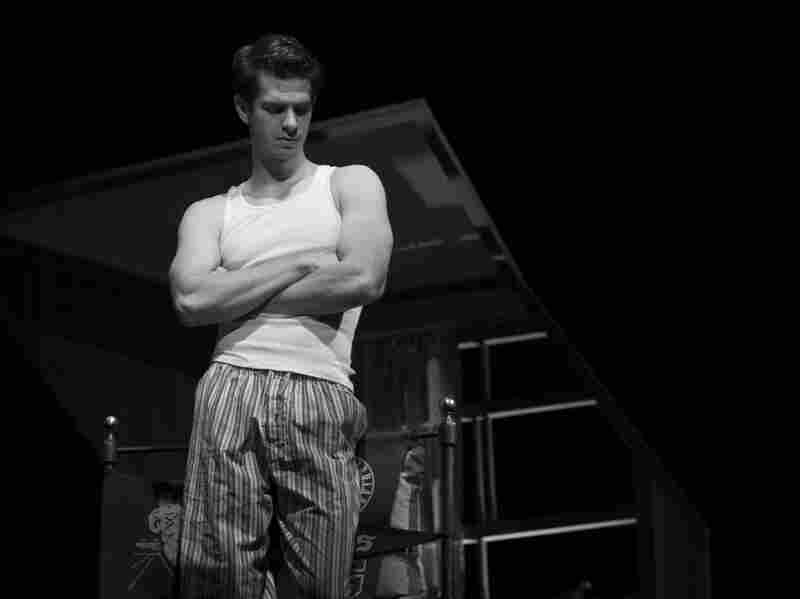 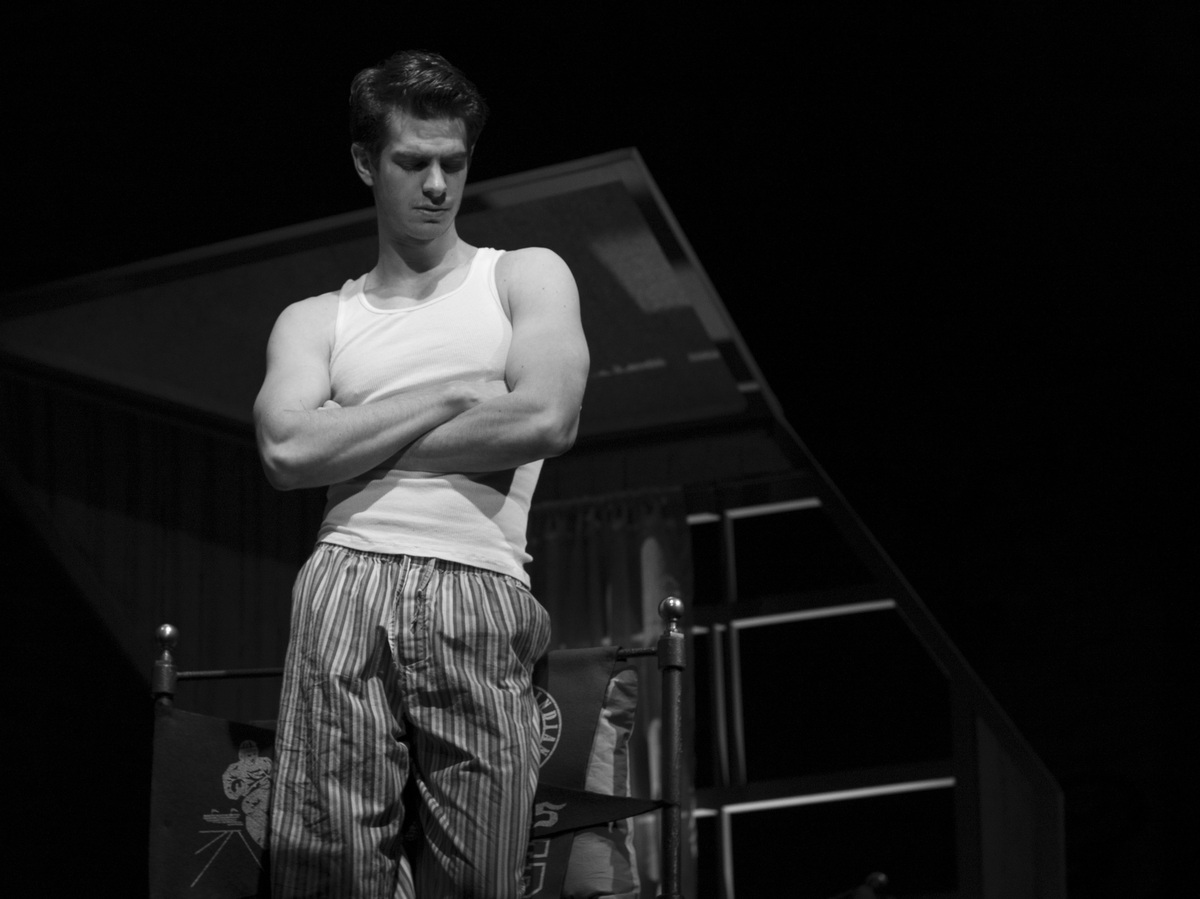 Andrew Garfield as Biff Loman in Death of a Salesman, directed by Mike Nichols.

For Garfield, the struggles Peter Parker endures are the source of Spider-Man's trademark sense of humor.

"He needs to laugh," Garfield jokes, "otherwise he'll just be crying all the time."

Garfield says he identifies with Spider-Man the same way the character's millions of fans do.

"It's fantasy fulfillment," he says. "He's a human hero that goes through all of the same struggles that we all have gone through, especially the skinny ones that want more power than they feel they have. I think it's a very inspiring, aspirational character that symbolizes goodness — and how difficult it is to be good — but how worth it it is."

Garfield's love of Spider-Man goes back to childhood, and there's photographic evidence to prove it: When Garfield's parents found out he was auditioning for the role, they quickly dug up a photo from his childhood showing him in a Spider-Man costume.

Garfield insists that his agents, not he, forwarded it along to the studio and director Marc Webb.

"I think that's the only reason I got the part," Garfield quips. "I think he was just like, 'Well, that kid's cute. I'll have to give it to that kid,' because I think no one else sent in pictures of themselves at 3."

As an adult, when Garfield finally put on the spider suit, it was an exciting experience — but also very uncomfortable.

"The reality of it is it's kind of that crazy-awful thing where fantasy is no longer," Garfield says. "You're truly in spandex, which actually sucks, in reality. It's hard work being that guy; it's tough."

To compensate for the limitations of the suit, Garfield studied the movements of athletes like Muhammad Ali and the soccer player Ronaldo.

"I wanted to have a sense of freedom," says Garfield, "because that's part of the point of a disguise. Because it gives you anonymity, and therefore freedom. I wanted to feel sexy in it — I didn't want to feel uncomfortable and like I was adjusting all the time."

So he studied great athletes and the beauty of their physical acts, as well as studying spiders' movements.

"If you're gonna do it and treat it real — if my DNA is being mixed with that of an actual spider," Garfield says, "then why not actually bring in the physicality of a spider? The lightness, the stillness, the patience and how that changes a 17-year-old boy. That's a fun thing to play with, as well."

In A Dystopian Britain, Teens Grope Toward A Future

When Garfield first considered auditioning, he thought about whether he would become too identified with the role, whether it would define his career.

"I know that deep down I just want to be an actor," he says. "I want to get to lose myself and have an audience suspend disbelief, so I did consider it. But there was a 3-year-old in me, and I couldn't strangle him, and he was just like, 'You're doing this for me.' You get one life, and who am I to turn down playing one of my greatest heroes?"

But Garfield seems already wary of the fame that may come with playing Spider-Man.

"It's a fascinating thing to step into, and it's a ride," he says. "It's a ride that I intend to have my eyes wide open for."

If the film is a success this summer, Garfield may be on this ride for a while. He's already signed up for two sequels.

Garfield says he most worries that the nature of how he meets people and talks with them will change.

"I like walking around," he says, "and I like talking to shopkeepers and people with dogs on the street. And I like being able to sit in parks and strike up a conversation with a family that I'm sat next to without having a photo taken with them. That would be nice."

That might be difficult to sustain, Garfield says, if The Amazing Spider-Man is seen by a lot of people, which he assumes it will be.

"It does get weird when suddenly people think they know you," he says. "But I guess that's just another thing to be curious about."