Accessibility links
'Like Our Own Mother': Aung San Suu Kyi In Thailand Myanmar's opposition leader dazzled in her first trip abroad in more than two decades, but her attention to Burmese refugees showed her political situation at home remains precarious. 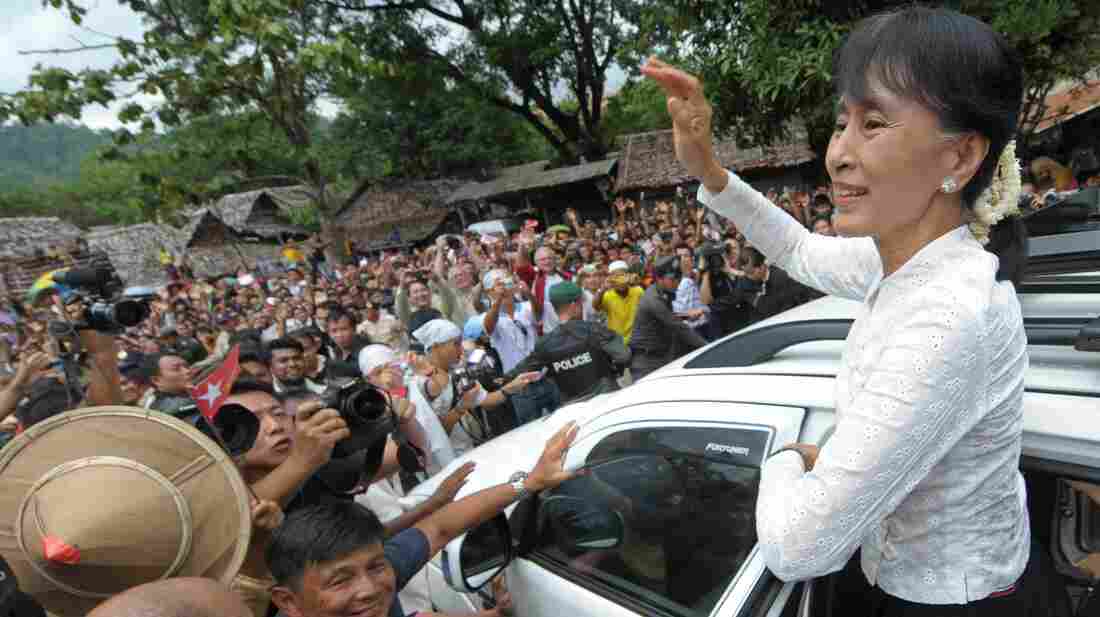 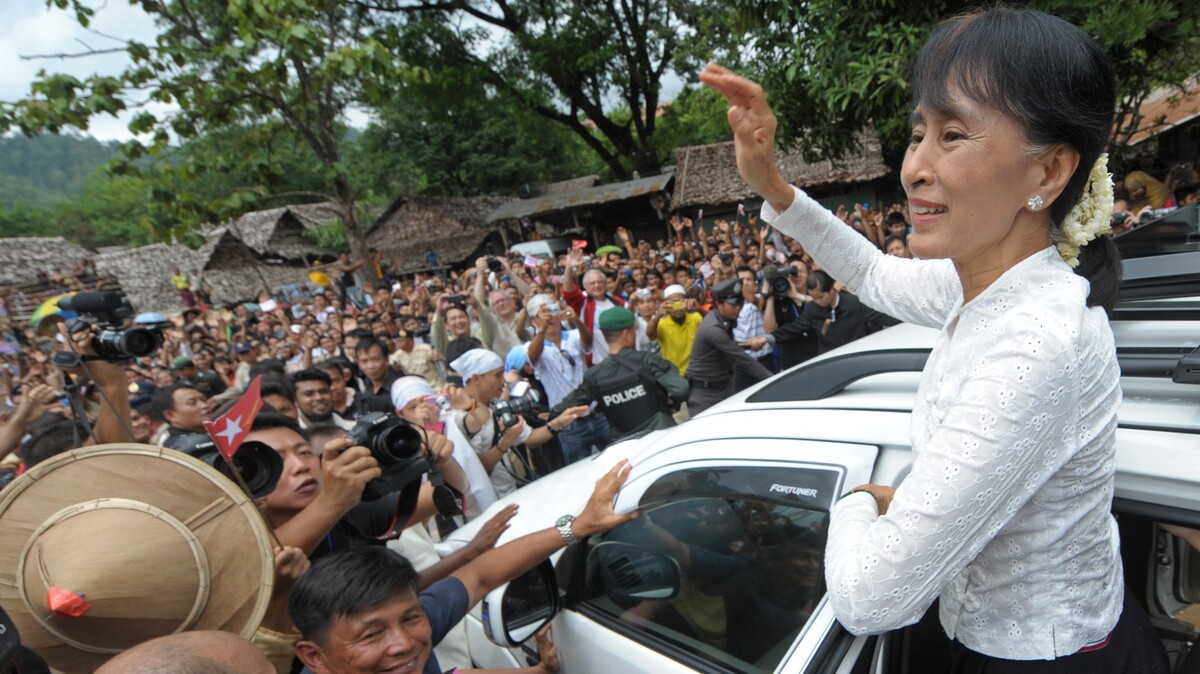 Myanmar democracy icon Aung San Suu Kyi waves to Myanmar refugees during her visit to the Mae La refugee camp near the Thai-Myanmar border on Saturday.

Suu Kyi attended an international economic forum in Thailand last week, but Saturday was very different. She visited a camp on the Thai-Myanmar border, where refugees have fled to escape oppression and civil war in her homeland. The visit showed that despite becoming one of the most prominent politicians in Asia, her political situation at home remains a bit precarious.

"The Burmese military regime denies that we refugees even exist," complained U Htwe, a refugee wearing a cone-shaped bamboo hat and carrying the flag of Suu Kyi's party, the National League for Democracy. "Our life here is very difficult, and Suu Kyi comes here to visit us just like our own mother. We're very happy to see her and we warmly welcome her."

A Media Spotlight On A Sensitive Subject

Suu Kyi's arrival unleashed a ferocious scrum of jostling journalists, police and supporters, just they way it does in Myanmar. 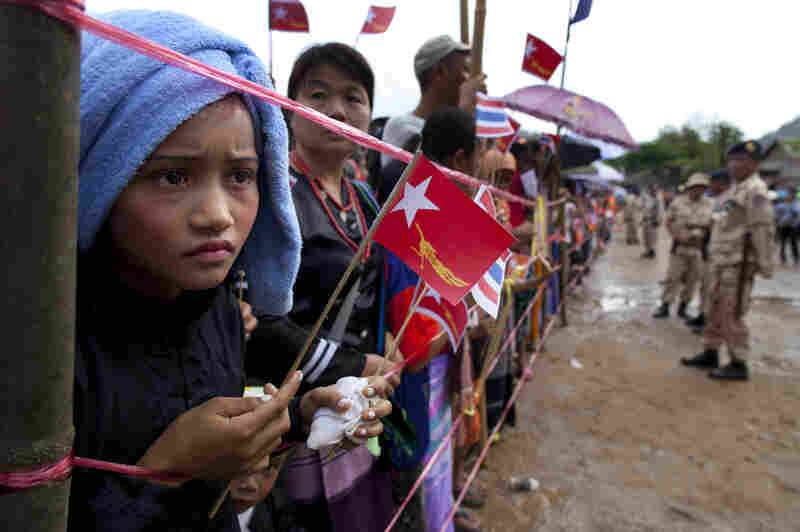 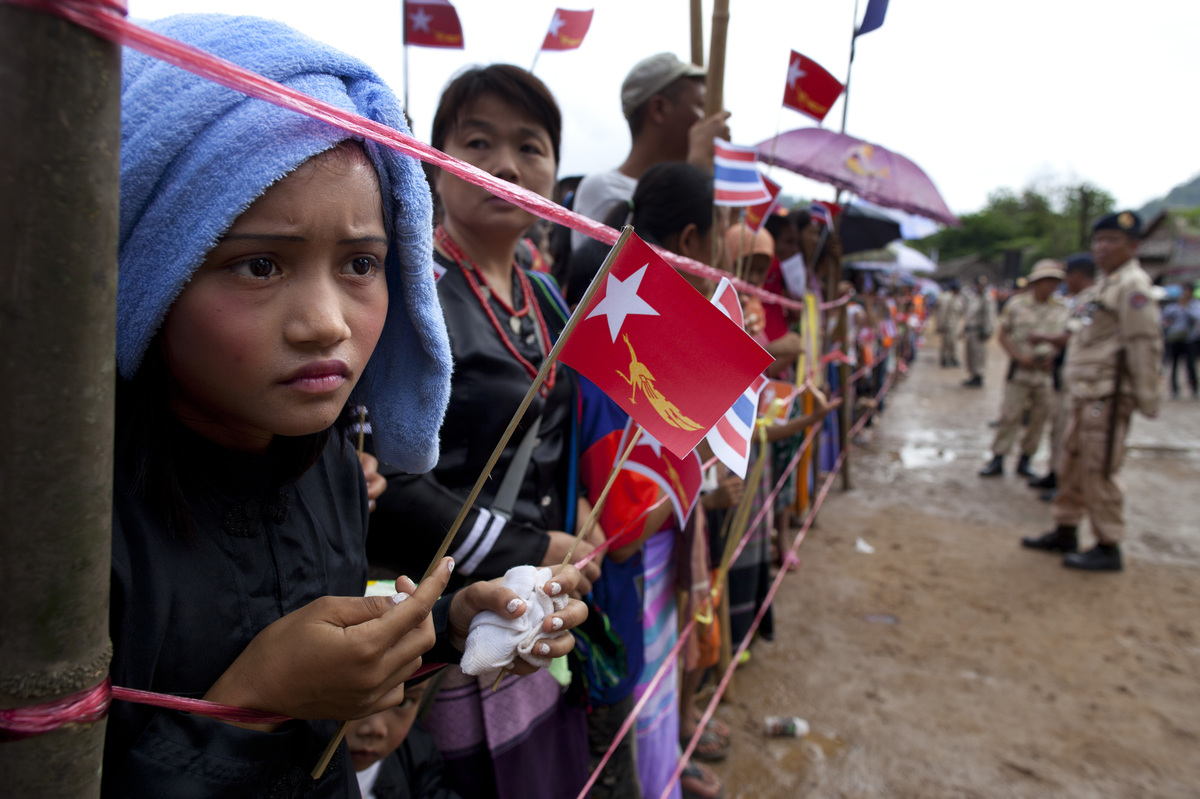 The refugees are perhaps the thorniest issue in the diplomatic relationship between the two neighbors, Thailand and Myanmar. While Thailand has taken in refugees for decades, some politicians and military officials would like to see the camps shut down and their inhabitants repatriated by any means necessary.

Thai authorities canceled Suu Kyi's planned speech to the refugees, and meetings with ethnic Karen leaders, and expelled some journalists who had snuck into the camp.

Experts warn that just as Myanmar's military could roll back the current political reforms, they could also take away Suu Kyi's political space to maneuver. Trevor Wilson, a former Australian ambassador to Myanmar, says that Suu Kyi, on her trip to Thailand as well as to Europe later this month, has to avoid any missteps that could get her in trouble at home.

"She doesn't want to get a situation where the freedoms that she now has are withdrawn," he says. "I mean, I'm not suggesting she won't be allowed to go back, but there may be some kind of restrictions imposed on the kinds of meetings she has with people."

Time To Go Back? Not Yet

The reforms may be tentative and fragile, but they have raised the prospect that one day, one of the world's longest-suffering groups of refugees may eventually go home.

Some refugees say they're waiting for more substantial political reforms, such as amending the constitution to protect their human rights, before they return. They point out that President Thein Sein has urged Burmese overseas to return home, but they point out that his words fall far short of an actual government policy.

Some nonprofit groups also are hopeful.

Michael Albert, the Thailand-based country manager for Right to Play, an aid group that provides refugee youth with sports and recreation, says civic groups are now shifting their strategies away from integrating the refugees into Thai society toward "preparing refugees for the eventuality of returning to Myanmar."

"This is something that has not really been possible in past," Albert says, "so in that sense it is quite an exciting time. The main issue that still remains is: at what time will that be? And everyone agrees it is not right now."

After Years Of Fighting, Thoughts Of A New Home

For now, fighting still rages in Myanmar's northern Kachin state between ethnic rebels seeking autonomy and government troops. In the east, a tenuous cease-fire is in effect with ethnic Karen rebels.

Saw David Tharkapaw, vice chairman of the Karen National Union, is one of the ethnic leaders whom Suu Kyi was barred from meeting. He says that instead of withdrawing, the Burmese army has used the cease-fire to stock up and dig in.

"We stopped shooting before we talk about the terms and conditions to govern the cease-fire," he says. "So this dry season they freely resupply their troops and they are improving their bunkers with reinforced concrete."

Even if the fighting stops, a generation of refugees has grown up in the camps with no ties to Myanmar. Many of them dream of emigrating to a third country.

There also are many like Nan Le'le, who fled here from the neighboring Karen State.

"I have no home to go back to," she explains. "The government confiscated our ancestral lands. Then they gave people new land elsewhere, but we had no documents proving we owned our home, so we had no way to claim a new home from the government. We were living in a rice field, and life was very difficult."

Asked where she wants to live, she holds up her young daughter and replies: Anywhere she can get a decent education.