Accessibility links
Weekly Standard: Obama Avoids Wisconsin On Tuesday Wisconsin will hold an election to recall Governor Scott Walker from office. It would be a victory for Democrats if the governor is successfully recalled, so why hasn't the president stopped by? Stephen F. Hayes of The Weekly Standard explores some of the possible reasons. 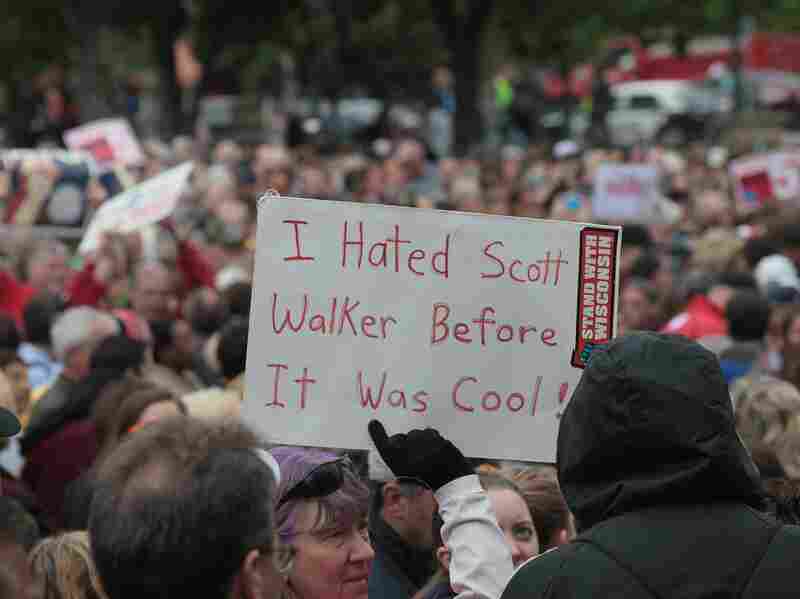 Supporters of Milwaukee Mayor Tom Barrett attend a Get Out The Vote Rally in Milwaukee on June 1, 2012. Barrett is trying to unseat Wisconsin Governor Scott Walker in a recall election scheduled for June 5. Scott Olson/Getty Images hide caption 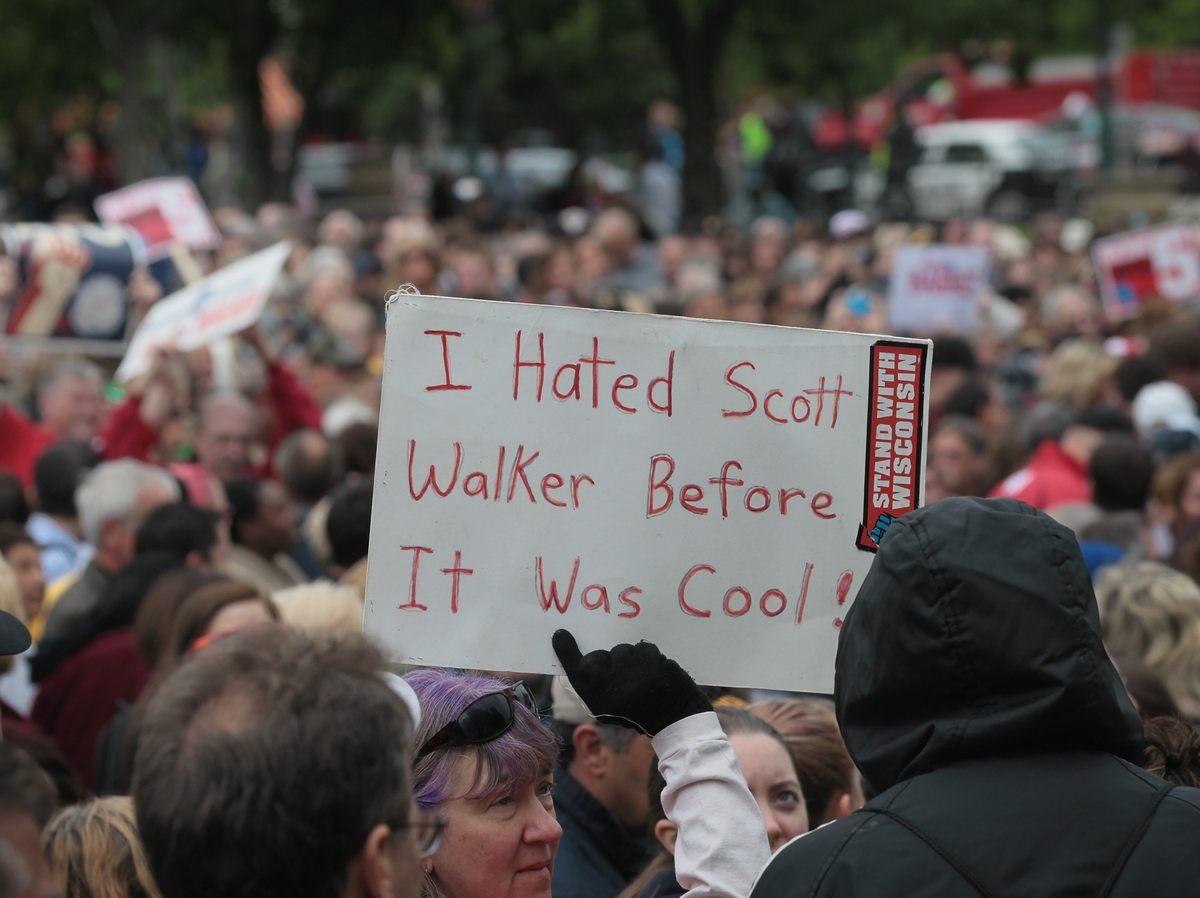 Supporters of Milwaukee Mayor Tom Barrett attend a Get Out The Vote Rally in Milwaukee on June 1, 2012. Barrett is trying to unseat Wisconsin Governor Scott Walker in a recall election scheduled for June 5.

Read Another Opinion On How Much Money Governor Walker Has Raised

Read Another Opinion On Race And The Wisconsin Recall Election

Stephen F. Hayes is a senior writer at The Weekly Standard.

On Friday, he visited Minneapolis, Minn., for a midday speech and three fundraisers. He departed late afternoon for Chicago and three more fundraisers that evening. The president stayed overnight in his hometown and spent Saturday morning at his old home before flying back to Washington, D.C., for a brief stop before heading to Camp David for some downtime.

So just four days before the recall elections in Wisconsin that the state's Democrats have worked 16 months to win, with potential implications for November 2012, the leader of their party did six fundraisers for himself in surrounding states but couldn't find time for even a quick stop? Think about it: As Wisconsin Democrats were busy getting voters to cast early ballots Friday and organizing for Tuesday, Air Force One flew overhead twice–from Washington to Minnesota and Minnesota to Chicago.

I'm no political strategist, but I don't get it.

Conventional wisdom is that Obama is avoiding a trip to Wisconsin because internal Democratic polling, like several recent public polls, shows Governor Scott Walker with an insurmountable lead over Milwaukee mayor Tom Barrett. Obama, this thinking goes, risks looking impotent if he makes an appearance for a losing candidate. I suppose that's correct, and there are certainly downsides to a visit.

But I wonder if the downsides to skipping the state — and skipping it in the way that he did — are not worse. And there's always the outside chance that Barrett pulls off a surprise victory — in which case Obama would have been celebrated as a difference-maker.

It's clear that Wisconsin Democrats wanted him to come. In an interview with the Huffington Post on Thursday Barrett responded to Obama's visit across the state's border and invited the president to Wisconsin. "We'd love to have him zip over to western Wisconsin," Barrett said. "I'm happy to meet him for a fish fry."

No luck. Rather than travel the 30 miles from the Twin Cities for the perch special at the Mallalieu Inn over in Hudson, Wisconsin (or, even better, a burger at Dick's), Obama went straight to Illinois, where he held a fundraiser at the Chicago Cultural Center "in an ornate, high-ceilinged room where guests in business attire mingled and sipped wine," according to the pool report. Tickets started at $2,500.

Wisconsin Democrats cannot be happy with the snub. They were "furious" at what they perceived as inadequate support from national Democrats, leaking their frustrations in what looked like an attempt to shame the Democratic National Committee into providing the backing they were seeking.

A few days after that piece ran, the Wall Street Journal reported that national Democrats had advised their Wisconsin counterparts against pursuing a recall in the first place.

Top Democrats now say that when labor groups first raised the specter of a recall, the party's officials urged their allies in Wisconsin to reconsider. "We told them it was a bad, bad, bad idea," one Democratic official said.

The bitterness that has led to such finger-pointing will be much worse if Barrett loses on Tuesday. That cannot be good for Obama. Two groups important to his re-election will feel abandoned by their president: labor and Wisconsin Democrats.

Start with labor. Throughout his presidential campaign, Obama promised that he would be a friend to labor in the White House, a national spokesman of sorts for America's workers.

"And understand this: If American workers are being denied their right to organize and collectively bargain when I'm in the White House, I'll put on a comfortable pair of shoes myself," he said while campaigning in 2007. "I'll walk on that picket line with you as president of the United States of America. Because workers deserve to know that somebody's standing in their corner."

In their corner? The Wall Street Journal reported this week that public employee unions have seen dramatic drops in membership since Walker's reforms made union membership voluntary.

The Wisconsin branch of the American Federation of Teachers has lost some 6,000 of its 17,000 members. And membership in the state's chapter of AFSCME has plummeted from nearly 63,000 to just 29,000 in just one year.

It's not hard to understand why labor sees these reforms as such a threat and why they see the recall as so important. And yet Obama, if he's wearing comfortable shoes, is doing so everywhere other than Wisconsin.

Yes, it's true that Obama for America volunteers have been organizing in Wisconsin. And, yes, Obama endorsed Barrett — from Washington.

But how meaningless was that long-distance endorsement? When a reporter asked Jay Carney about it last week, the president's spokesman said he did not know that his boss had formally backed Barrett.

Beyond that, Obama doesn't want Wisconsin Democrats dispirited — perhaps even resentful — heading into November. His electoral strategy depends on a win in the state. We know this because his campaign has told us.

In December, Obama's campaign manager Jim Messina laid out the president's five best paths to 270 electoral votes — the West path, the Midwest path, the South path, the Florida path, and the Expansion path. What's notable about them in this context: Each one assumes a win in Wisconsin.

That's no longer a safe assumption, especially if Walker prevails on Tuesday. It's true that Obama won Wisconsin by a huge margin in 2008 — 56-42. And he's leading most polling now — with a RealClearPolitics average of 4.7 percent. But Republicans dominate the state legislature and hold the governorship. And the results of the 2000 and 2004 presidential elections suggest the state could well be in play again. In 2004, John Kerry defeated George W. Bush by a margin of just 12,000 votes out of nearly 3 million. In 2000, Al Gore beat Bush by just 5,500 votes out of 2.5 million.

An Obama visit to Wisconsin, even if it preceded a loss, would have energized the activists who have been working in the state for more than a year — many of whom Obama will need to work for him over the next five months. And it would have given rank-and-file Democratic voters the sense that their president stood with them on a campaign of such obvious importance to them.

Maybe these folks will quickly move beyond the recall if Barrett loses. After all, five months is a long time to let those wounds heal.

But maybe not. It's a big chance to take.

Of course, there's another reason Obama might want to avoid Wisconsin — one that would not likely occur to Democrats in the state or their union brothers. Perhaps the White House understands that the reforms are working and recognizes that they're increasingly popular among Wisconsin voters. And that, it seems to me, would be the most devastating indictment of the recall yet.

Double Take 'Toons: Long Haul To The Recall June 4, 2012
Enthusiasm To Recall Wis. Governor May Be Waning June 3, 2012
The Wisconsin Recall, Life Behind The Lobby And The Beach Boys June 3, 2012