Accessibility links
Israel Presents Itself As Haven For Gay Community Israel's government is backing a public-relations campaign styling the country as a haven for the gay community. Israel offers many legal protections to gays in a region that is typically hostile to them. But activists say the progress came in spite of — not because of — the government 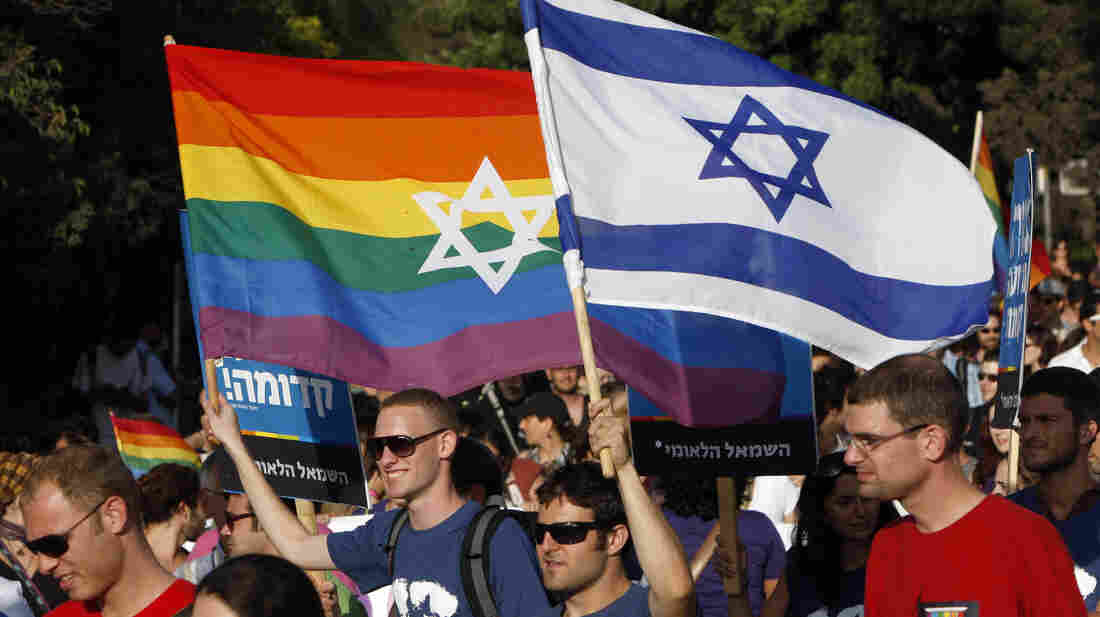 Israel is now marketing itself internationally as welcoming to the gay community. Participants in the annual gay pride parade in Jerusalem are shown here on July 29, 2010. Ronen Zvulun/Reuters/Landov hide caption 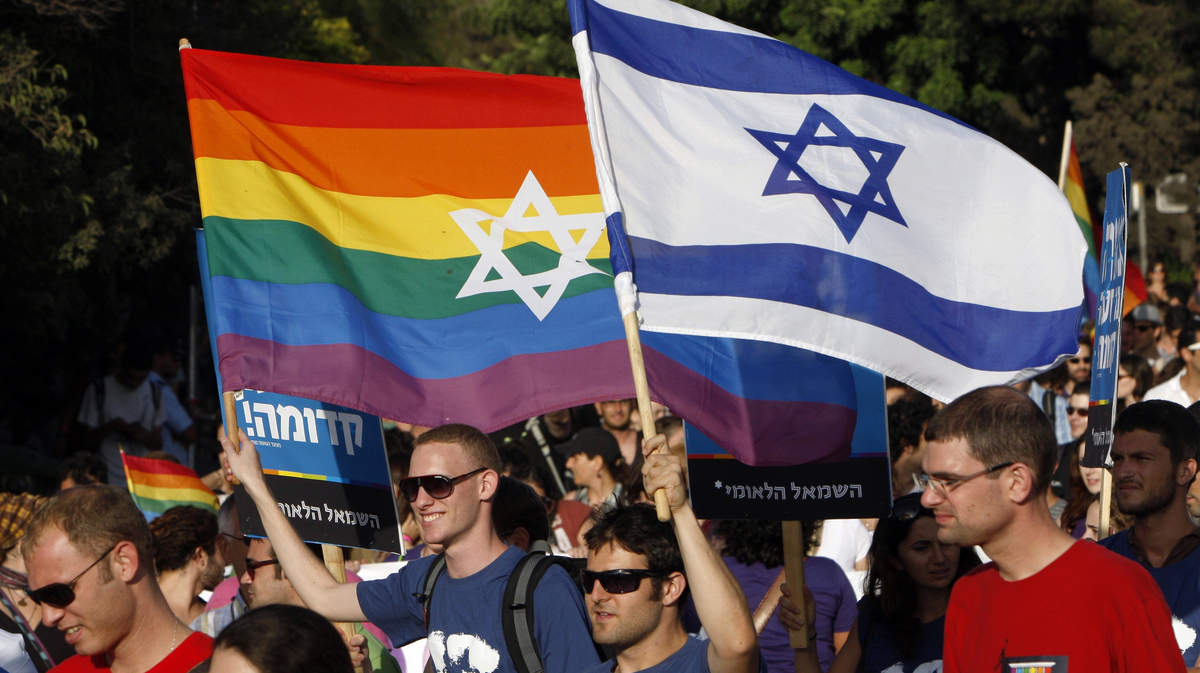 Israel is now marketing itself internationally as welcoming to the gay community. Participants in the annual gay pride parade in Jerusalem are shown here on July 29, 2010.

The sun is setting, gay pride flags wave next to the water, same-sex couples kiss and cuddle on the beach. This is Tel Aviv — which the government of Israel is now pushing as one of the most gay-friendly cities in the world — and gay tourism is booming.

"It's a place you have to go, good parties, nice people, beautiful people and just different from all the other tourist destinations you can go to," says Jorg Grosskopf, a German tourist who, together with his partner, Peter, is on his seventh vacation in Israel.

Tel Aviv will host its annual gay pride parade June 8. The government and organizers say it's expected to be the biggest one ever.

The government of Israel is styling the country as a haven for the gay community. But it's more than just beaches, parades and clubs. Israel has laws protecting the lesbian, gay, bisexual and transgender, or LGBT, community.

"LGBT rights in Israel are truly an achievement," says Itai Pinkas, a former Tel Aviv council member. "It's an obligation to show to the world."

Pinkas notes that gays can openly serve in the Israeli army. Gay marriages from other countries are respected. However, Israel's religious authorities, who control marriages in the country, do not sanction civil marriages, a prohibition that covers both heterosexual and same-sex couples.

Drawing Comparisons In The Region

The LGBT community has other protections as well, which is not the case in other parts of the Middle East, Pinkas says.

"People should not forget that our neighborhood is not a good one for gays, as for women, as for anyone who is not religious or very conservative," he says. 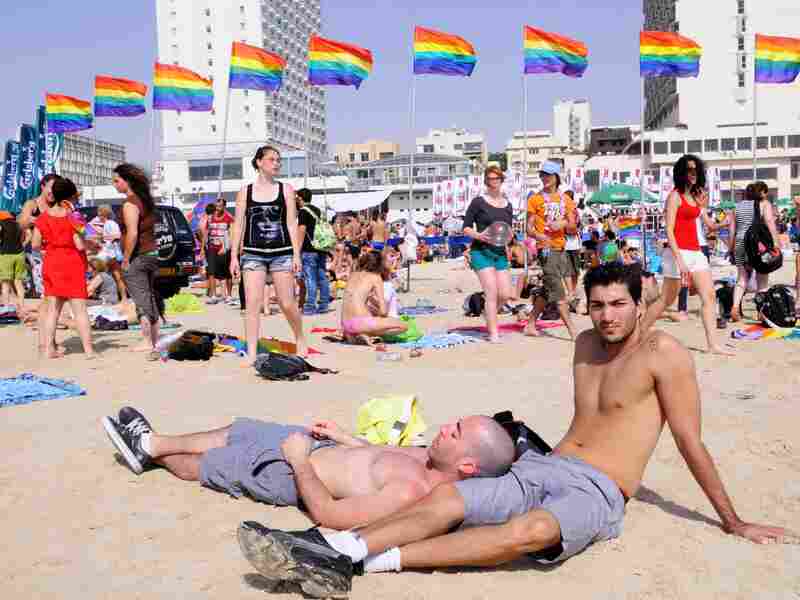 Thousands of members of Israel's gay community and its supporters marched on June 11, 2010, in the annual gay pride parade in Tel Aviv. The parade began in central Tel Aviv and ended at the city's beachfront. Kfir Sivan/Israel Sun/Landov hide caption 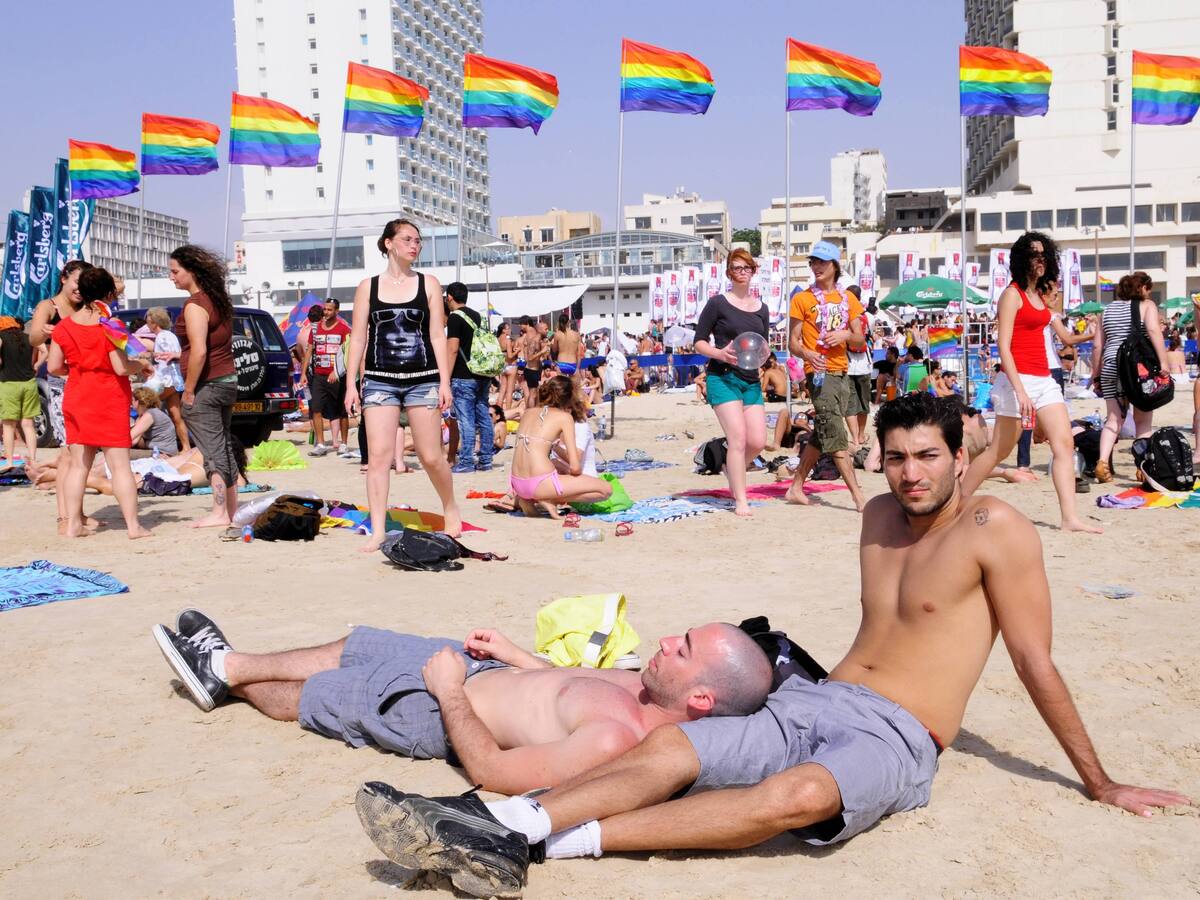 Thousands of members of Israel's gay community and its supporters marched on June 11, 2010, in the annual gay pride parade in Tel Aviv. The parade began in central Tel Aviv and ended at the city's beachfront.

However, even within Israel, acceptance of the gay community is not universal. Jerusalem, for example, is just an hour's drive from Tel Aviv, but is far more conservative, and there is less tolerance for the gay community.

Not everyone in the gay-rights community agrees that the government should be taking credit for any progress that has occurred.

"They don't have the right to claim fame on that," says Mike Hamel, who is on the board of Israel's National LGBT Task Force, a private organization.

Generally speaking, Hamel says successive governments have not been supportive of gay rights, and it took legal challenges for there to be progress — a pattern that continues today.

For example, a recent bid to include a specific clause barring discrimination on the basis of sexual orientation in a student-rights bill was blocked by Israel's justice minister, Yaakov Neeman, who is a member of a religious party.

Israel's current government is a coalition that includes several conservative religious parties that control sensitive ministries such as justice and the interior — ones that control what services and rights the gay community has, Hamel says.

"When it comes to practical things, we still have a hard battle to fight," he says.

Other critics accuse the government of what they call "pinkwashing."

Gay groups that support the Palestinian bid for an independent state use the phrase to describe Israel's public relations strategy. They charge that the Israeli government is highlighting the rights enjoyed by the gay community in Israel to obscure the occupation of the Palestinians.

"Israel is a wonderful country in many ways. The sea is beautiful, it's a wonderful country for high-tech, and they've made a lot of progress in terms of gay rights," says Sari Bashi, who is with the Israeli human rights group Gisha, which advocates on behalf of the Palestinians. "It doesn't change the fact that what is going on in the occupied territories is a severe violation of human rights that needs to be stopped."