Accessibility links
'The Honest Truth' About Why We Lie, Cheat And Steal Behavioral economist Dan Ariely has found that very few people lie a lot, but a lot of people lie a little. He talks about his findings in his new book, The (Honest) Truth About Dishonesty: How We Lie To Everyone — Especially Ourselves. 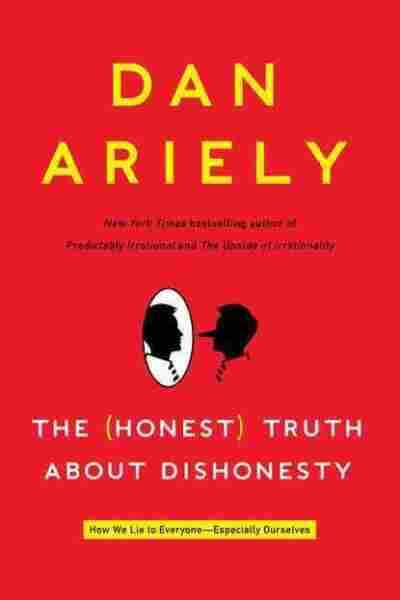 The Honest Truth About Dishonesty

How We Lie to Everyone — Especially Ourselves

Chances are, you're a liar. Maybe not a big liar — but a liar nonetheless. That's the finding of Dan Ariely, a professor of psychology and behavioral economics at Duke University. He's run experiments with some 30,000 people and found that very few people lie a lot, but almost everyone lies a little.

Ariely describes these experiments and the results in a new book, The (Honest) Truth About Dishonesty: How We Lie To Everyone — Especially Ourselves. He talks with NPR's Robert Siegel about how society's troubles aren't always caused by the really bad apples; they're caused by the scores of slightly rotting apples who are cheating just a little bit.

On the traditional, cost/benefit theory of dishonesty

"The standard view is a cost/benefit view. It says that every time we see something, we ask ourselves: What do I stand to gain from this and what do I stand to lose? Imagine it's a gas station: Going by a gas station, you ask yourself: How much money is in this gas station? If I steal it, what's the chance that somebody will catch me and how much time will I have in prison? And you basically look at the cost and benefit, and if it's a good deal, you go for it."

On why the cost/benefit theory is flawed

"It's inaccurate, first of all. When we do experiments, when we try to tempt people to cheat, we don't find that these three elements — what do we stand to gain, probability of being caught and size of punishment — end up describing much of the result.

"Not only is it a bad descriptor of human behavior, it's also a bad input for policy. Think about it: When we try to curb dishonesty in the world, what do we do? We get more police force, we increase punishment in prison. If those are not the things that people consider when they think about committing a particular crime, then all of these efforts are going to be wasted."

On how small-time cheaters still perceive themselves as good people

Why Do We Cheat?

"Across all of our experiments, we've tested maybe 30,000 people, and we had a dozen or so bad apples and they stole about $150 from us. And we had about 18,000 little rotten apples, each of them just stole a couple of dollars, but together it was $36,000. And if you think about it, I think it's actually a good reflection of what happens in society."

On his favorite cheating experiment

"Well, people do this, they shred, they come back, and they say they solved on average six problems, we pay them $6, they go home. What the people in the experiment don't know is that we've played with the shredder, and so the shredder only shreds the sides of the page but the main body of the page remains intact. ... What we find is people basically solve four and report six. ... We find that lots of people cheat a little bit; very, very few people cheat a lot.

Cheating In College Is Widespread — But Why?

The Wide World Of Sports Cheating

On how our cashless economy may encourage cheaters

"The moment something is one step removed from money ... people can cheat more and [still] feel good about themselves. It basically relieves people from the moral shackles. And, the reason this worries me so much is because if you think about modern society, we are creating lots of cashless economy. We have electronic wallets, we have mortgage-backed securities, we have stock options, and could it be that all of those payment modalities that as they get more and more further from money become easier for us to cheat and be dishonest with them."

On one version of the experiment, in which the administrator of the test takes a cell phone call while he's giving instructions to the participants, which causes the participants to cheat even more

"I think this goes back to the law of karma, right? So if you ask yourself, how can I rationalize cheating, really the main mechanism in all of our experiments is rationalization. How can you rationalize your actions and still think of yourself as a good person? And if somebody has mistreated you, now you can probably rationalize something to a higher degree."

On the dishonesty that arises from conflicts of interest

"We need to change ... regulation, and it's basically to change conflicts of interest. ... Much like in sports, if you like a particular team and the referee calls against your team, you think the referee is evil, vicious, stupid. ... In the same way, if you have a financial stake in seeing the world in a certain way, you're going to see the world in a certain way. So the first thing I think we need to do is eradicate conflicts of interest."

"There's kind of two ways to think about the Broken Windows theory: one is about cost/benefit analysis and do people do it; the other one is about what ... society around us tells us is acceptable and not acceptable. I actually believe in the second approach for this. So when we go around the world and we ask ourselves what behavior are we willing to engage in/what behavior we're not, we look at other people for a gauge for what is acceptable. In our experiments, we've shown that if we get one person to cheat in an egregious way and other people see them, they start cheating to a higher degree. So, for me, the broken window theory is more as a social signal than fear of being caught."