Accessibility links
Why Every '70s Game Show Must Bow Down To 'Match Game' Richard Dawson was most famous for Family Feud, but he was the most fun on Match Game, the party show of the '70s.

Why Every '70s Game Show Must Bow Down To 'Match Game'

Why Every '70s Game Show Must Bow Down To 'Match Game' 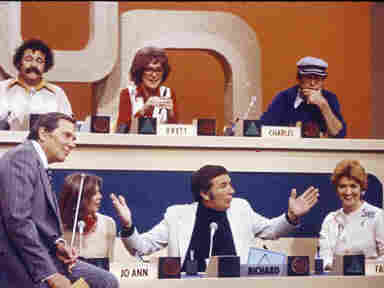 The participants on an early episode ofÂ Match Game, including Richard Dawson in the lower center position. GSN hide caption

It's true that Richard Dawson was an actor who appeared on Hogan's Heroes and in The Running Man ... all those things are true. And as we remember him in the wake of his death over the weekend, I'm sure he'd like to have all those things mentioned.

But it's not those things I remember. And honestly, as much Family Feud as I've watched in my life – and I've watched a lot – it's not even that show, his most famous, that makes me remember Dawson most fondly.

Match Game was hosted for most of its run by Gene Rayburn, and it featured a rotating cast of regulars and occasional drop-ins, including Betty White, Charles Nelson Reilly, Brett Somers, Gary Burghoff, Nipsey Russell, Fannie Flagg, and other clever talkers. While Match Game had the look of an ordinary game show, it was sort of the happy hour of game shows – chatty, dirty, genial, and notorious for presenting shows where everybody seemed kind of ... well, happy-hour-ish.

The bonus round involved a single, final match where you had one chance to complete a phrase the same way a single celebrity panelist completed it. For quite a while, you could pick whichever celebrity you wanted from the panel. But there was a problem with that rule: Almost everybody picked Richard Dawson, whose ability to give the same answer the contestants gave was sometimes freaky. So eventually, they instituted a wheel you had to spin to see which celebrity you'd have to match.

Basically, he was so good, he broke the game and they had to change it.

On Match Game, Dawson was kind of like the relative your parents try to keep you from hanging around with too much. The show is notorious for sometimes seeming like everybody has had a drink or two, and in fact, some former panelists have confirmed that lunch sometimes included a wee bit of, say, vodka. Whether he was actually drinking or not, Dawson certainly gave off a vibe that made you believe there could be a cocktail under the table. He was naughty but sophisticated; dirty but not vulgar.

He was a great match for an entire show that was, in large part, about juvenile jokes. In some ways, the funniest thing that could happen was a contestant steering right into the skid and actually, for instance, filling in the blank about the woman having "the biggest [blanks] I ever saw" with ... "boobs." You'll notice that she matched several of the panelists, but they all found words they thought were less on the ... nose?

Match Game is probably up against $25,000 Pyramid for the honor of my favorite '70s game show to watch in reruns (Game Show Network still shows both.) Pyramid was the nice one – the wholesome Dick Clark extravaganza where genuine intelligence and creativity reigned. Match Game was the nutty one, where, when I was a kid, it was a little like sneaking into a party where you don't get all the jokes but you're enthralled by what a good time everyone is having.

Family Feud may have been the show where he kissed lots and lots (and lots) of women, but Match Game was the one where he charmed me.