Accessibility links
Rare Transit Of Venus 'A Beautiful Event' Viewing parties are scheduled across the country Tuesday, when the planet Venus will pass between Earth and the sun. "This is one of the most rare lineups that you'll experience in your lifetime," says the president of the St. Louis Astronomical Society. 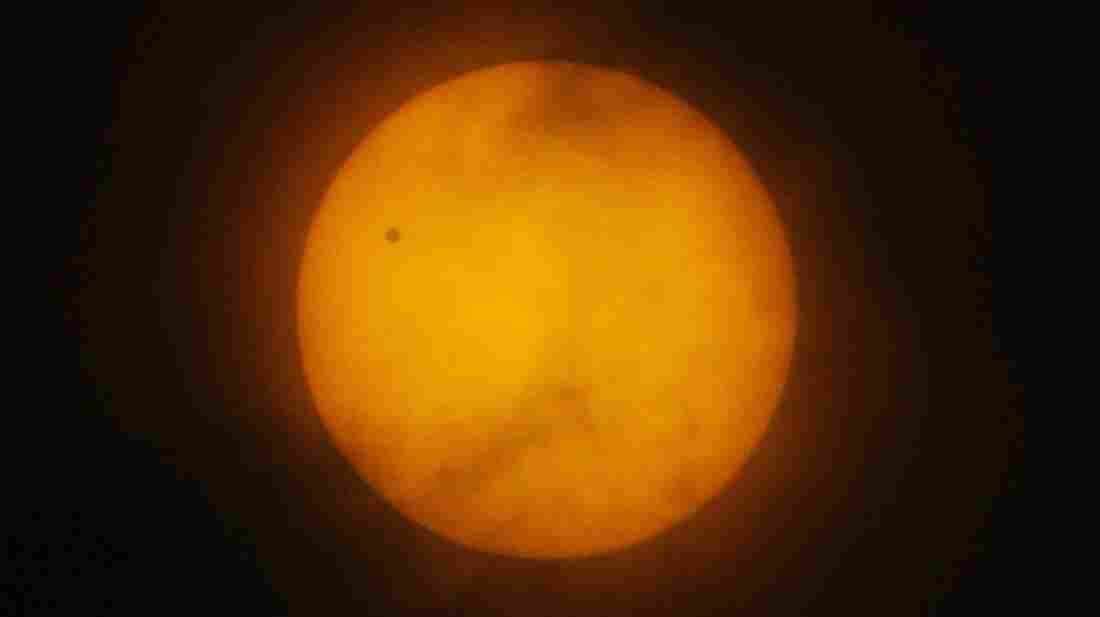 Venus passes between Earth and the sun during its last transit on June 8, 2004, as seen from Manila, Philippines. The next transit of Venus will be in 2117. Bullit Marquez/AP hide caption

A rare astronomical event will take place Tuesday evening: The planet Venus will pass between Earth and the sun, appearing as a small black dot moving across the sun's bright disk. It's known as the transit of Venus, and it won't happen again for more than 100 years.

The hills of Forest Park in St. Louis, Mo., are going to be among the best places in the city to watch Venus cross in front of the sun, but some people in the park weren't aware of the phenomenon. That included Chris Ziegler, who says he didn't know about the transit of Venus and wouldn't be watching: "I have my hands full with the kids," he says.

From St. Louis Public Radio: More About The Transit Of Venus
Where To Watch
From NASA: History, Watching Tips

One person who does know about it is St. Louis Astronomical Society President Jim Small. He says it's going to be pretty amazing.

"Oh, it's a beautiful event. In astronomy, you just don't get to see two things crossing in front of each other like that very often," Small says. "You know, people talk about planets lining up, and everything else like that. This is one of the most rare lineups, if you will, that you'll experience in your lifetime."

Small is organizing a transit of Venus viewing party in Forest Park — one of hundreds planned across the country. People will be able to use special telescopes to look directly at the sun.

"It'll be kind of an orange ball. You'll see some things that look like flames around the outside edge," he says. "Those are prominences, and those will be, if you put them to scale for the Earth, maybe one to three times the size of the Earth. So they're really, really, really huge."

More About The Transit Of Venus

As Venus Transits The Face Of The Sun, Here's How To Safely Watch

Look Up, Stargazers: June 5 Is The Transit Of Venus

But Small says if you want to see any of this, you'll have to be careful.

"Especially don't point any kind of astronomical or optical device like a binocular or telescope toward the sun unless you know specifically what you're doing with that, because you can destroy your vision instantly in most cases," he says.

This is your last chance to see a transit of Venus — it won't happen again until 2117. University of Missouri-St. Louis astrophysicist Erika Gibb says even though Venus passes between Earth and the sun every year and a half or so, its orbit is tilted relative to ours, making a perfect alignment rare.

"Most of the time it misses — it either passes above the sun or below the sun," she says.

In the 17th and 18th centuries, the transit played a key role in the history of astronomy. Gibb says scientists used it to figure out the size of the solar system. Astronomers had people in different parts of the world time when the transit began and ended.

"Then they could use triangulation techniques to figure out what the actual distance between Earth and the sun, and Earth and Venus were," Gibb says.

This transit of Venus will be visible from all over the U.S. in the hours before sunset.