Accessibility links
Cyclist Evelyn Stevens' Swift Ride From Wall Street To The Olympics Four years ago, Evelyn Stevens was an investment banker who started entering bicycle races. But she rose through the cycling ranks quickly, and next month she'll represent the United States at the London Olympics. 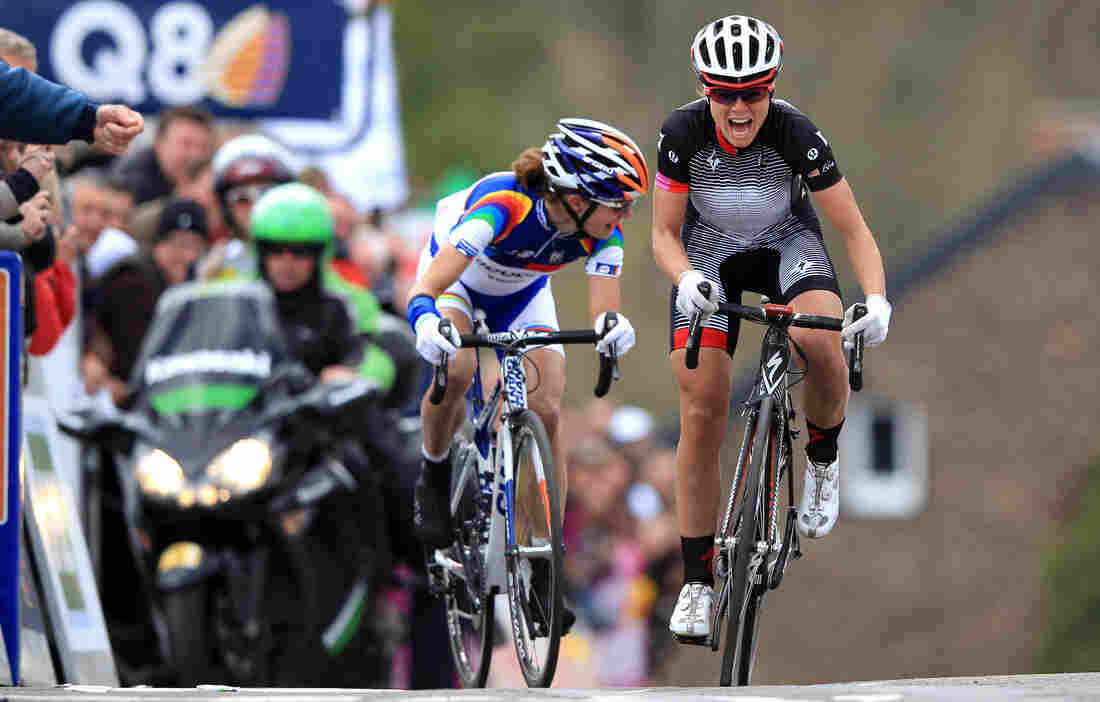 Since entering the sport at age 25, Evelyn Stevens (right) has risen to the elite ranks of women's cycling. In April, she passed top rival Marianne Vos of Holland on her way to winning the Fleche Wallonne race in Belgium. Michael Steele/Getty Images hide caption

Four years ago, Evelyn Stevens was working as a Wall Street investment banker and just starting to race bicycles. But she rose through the cycling ranks quickly, and next month she will represent the United States at the Olympic Games in London.

On a recent muggy morning in busy Central Park, Stevens easily weaves her bicycle through many obstacles.

"There's the horse carriages, there's the bike buggies, there's the Rollerbladers," she says, "the people on their bikes training, the five gajillion joggers, the hot dog stands, the dogs — there's a lot going in."

Even while riding up a hill and talking, she's breathing easily. Stevens knows these roads well. Early on some mornings, they're used for bike races, and this is where she got her start.

One reason she remembers that first race so clearly is that it wasn't very long ago. The last time the summer Olympics rolled around, Stevens was 25, working on Wall Street, and just starting to train with the racers in Central Park.

"During the Beijing Olympics, I had just bought a bike and had just done a few, maybe my second or third bike race at that point, so still a category 4 — beginner — bike racer."

"She came into the sport with absolutely no cycling experience at all," says Matthew Koschara, a former pro cyclist who coached Stevens when she was starting out.

Stevens had always stayed fit; she played tennis in college. But Koschara says that she also had some untapped athletic potential.

"It was so clear early on that Evelyn was one in a million," he says. "She certainly had the physiology, and she also had the psychology, as well. And with those two, really, it just became clear that she just needed to develop as rapidly as possible."

And develop, she did. Within a year, Stevens had quit her job and was competing for the United States at the world championships in Switzerland. Then she won two national championships.

Her biggest victory came in April, when Stevens became the first American woman to win the Fleche Wallone in Belgium. After 75 miles of racing, it was just Stevens and the defending champion, Marianne Vos, battling it out wheel-to-wheel, on the steep climb to the finish. In that moment, she says, the roar of the crowd faded away.

"I didn't hear anything. It just went, like, it was my first real experience of extreme tunnel vision," Stevens says. "All I could focus on, I was just telling myself, 'This is now, this is when you do it' — and just going, digging deeper than I've ever dug. I saw her wheel, and then I realized I was coming around it, and then I saw the finish line. And it was the most, yeah, the most exhilarating feeling and experience I've ever had."

Then in late May, Stevens' Specialized-lululemon team dominated the nation's largest women's race, the five-day Exergy Tour in Idaho, where Stevens took the overall title. That race firmed up her spot on the Olympic road race team.

"The Olympics for women's cycling, it's one of the marquee events. It's another time that we get to be on television, which, you know, we don't get a lot of television coverage," she says. "So, it's an opportunity for people to see what we do. And how, you know, we take it just as seriously as the men racing in the Tour de France. For us, the Olympics are huge."

Stevens has left New York and now lives between races in Boulder, Colo. She says she misses the Central Park bike scene — but she's also glad she quit her day job.