Accessibility links
Once Tolerated, Alcohol Now Creates Rift In Tunisia Before Tunisia's revolution last year, alcohol was broadly accepted in the country, considered one of the more secular Arab states. But as Morning Edition host Steve Inskeep reports, Islamists are gaining influence and that has created a debate on how the country should deal with drinking.

Over the next couple weeks, NPR Morning Edition host Steve Inskeep is taking a Revolutionary Road Trip across North Africa to see how the countries that staged revolutions last year are remaking themselves as they write new social rules, rebuild their economies and establish new political systems. Steve and his team will be traveling some 2,000 miles from Tunisia's ancient city of Carthage, across the deserts of Libya and on to Egypt's megacity of Cairo. In this story, he looks at the friction that has developed over alcohol in Tunisia.

The other night we stopped at a Tunisian hotel, a clean and modest place with features that reminded me of an old Holiday Inn where my family stayed as a kid. At first it seemed the main difference was that, being in Tunisia, the hotel was next door to the ancient ruins of a magnificent Roman temple.

Over dinner in the hotel restaurant, one of my traveling companions ordered a beer, only to have a staff member in his red blazer inform us sadly that the hotel did not serve alcohol. Later, the staff member whispered more of the story: If we had only arrived sooner, he would have been able to serve the beer.

I respect these people as citizens that have the right, for example, to exist. But I don't respect their ideas because we want our country to advance, not to go back in history.

A few days before our visit, he said, conservative religious activists came to the hotel and objected to the serving of alcohol, particularly on Friday, the Muslim holy day.

These activists have been making news all over Tunisia, pressing bars and liquor stores to close. Hoping to avoid trouble, the hotel cut off liquor sales entirely. A cocktail shaker stood sad and unused on the shelf behind the vacant bar.

Tunisia, the birthplace of the Arab Spring, has gone from battling dictatorship to battling a broad range of issues, including alcohol. And it was just such a battle that led us to the city where the Arab revolts began.

It was in the town of Sidi Bouzid where fruit-seller Mohammed Bouazizi, feeling abused by the police, set himself on fire. A sculpture today marks the spot — a simple fruit vendor's cart, shown knocking over the chairs of Arab rulers.

Sidi Bouzid has established its place in history, yet today it's an uneasy place and, increasingly, a hard place to get a drink.

Alcohol is legal and publicly consumed in Tunisia, but it is becoming a point of friction as Tunisians try to figure out what kind of country they want to build in the wake of the revolution.

As we are shopping in Sidi Bouzid, one unemployed man comes up to tell us that he has an undergraduate law degree, but has been looking for work for a year. We ask if his friends are also out of work.

As devoted Muslims, he says, he and his friends have joined protests against two local liquor stores.

Even during the era of the Prophet Muhammad there was liquor, he says. But people in this town started complaining, saying that a man could not walk with his wife here with the drunken people walking around. 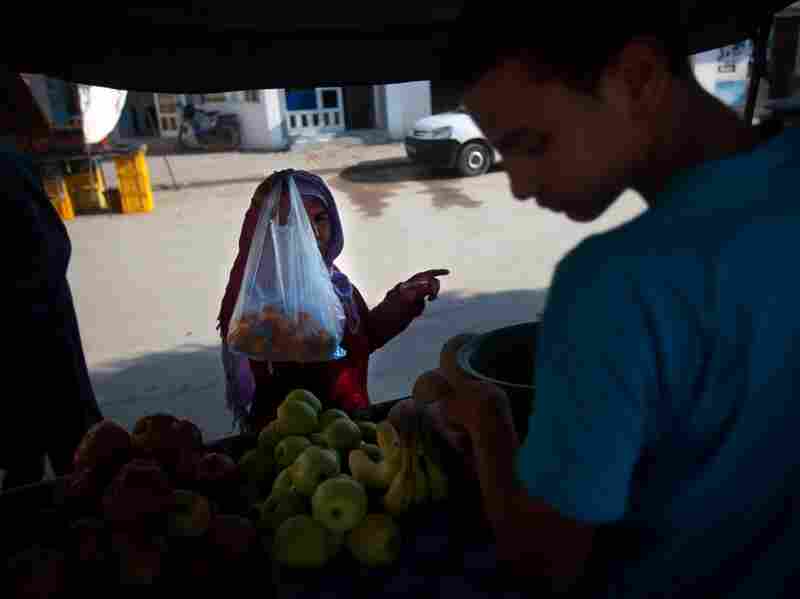 A vendor sells fruit at the Sidi Bouzid market where fruit-seller Mohammed Bouazizi worked. Bouazizi's self-immolation in front of the governor's offices nearby was the catalyst for protests all over the county. John W. Poole/NPR hide caption 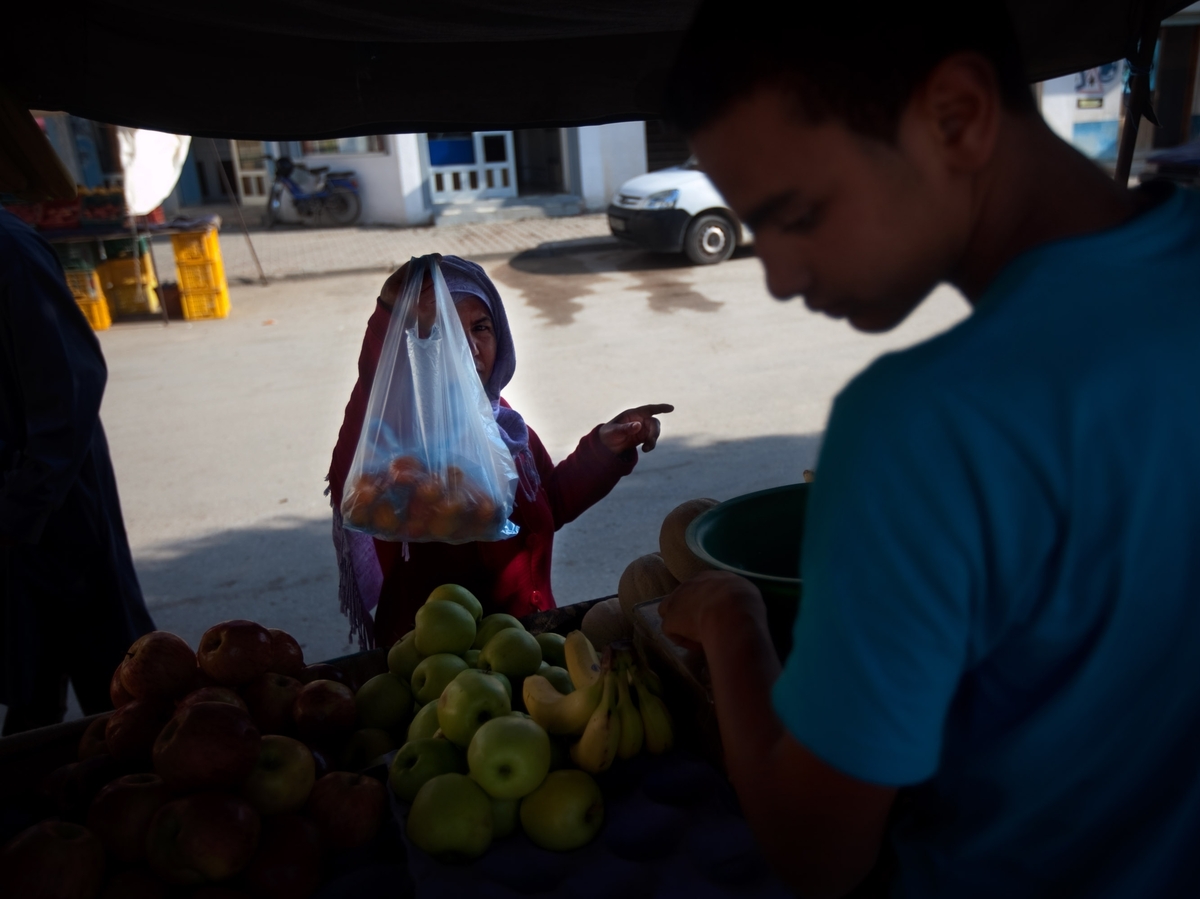 A vendor sells fruit at the Sidi Bouzid market where fruit-seller Mohammed Bouazizi worked. Bouazizi's self-immolation in front of the governor's offices nearby was the catalyst for protests all over the county.

The new provincial governor became involved. One store owner agreed to move, but the other resisted the pressure.

The store owner's brother came to this spot, confronted the protesters, and fired a shotgun, leaving pockmarks in the wall of the yellow mosque next door.

So the protesters burned the home of the liquor store owner.

The provincial governor, Mohammed Mansour, says police are reluctant to stop such disputes, having been accused of corruption in the old regime. And citizens are all too eager for a fight.

"This is the kind of mentality of post-revolutionary Tunisians, and they're still living in this period of the revolution when they think they can do everything, and I understand that," says Mansour.

A Source Of Friction

News of all this has spread to bars that remain open — like a dim dive in Tunis called JFK. Here, political activist Ramy Sghayer sipped a beer while "Killing Me Softly" played on the sound system.

He finds his friends here, along with green bottles of Celtia, a Tunisian-made beer, which the bartender opens one-handed by knocking them against the side of the table.

The bar is conveniently near the place where protesters, including Sghayer, brought down Tunisia's ruler last year.

NPR Music features some of the music Morning Edition host Steve Inskeep is hearing along his travels through Tunisia, Libya and Egypt — in cafes, clubs and on local radio stations.

Now he's dismayed that, in his view, Islamists are ruining his dream of a free Tunisia.

"I respect these people as citizens that have the right, for example, to exist," he says. "But I don't respect their ideas because we want our country to advance, not to go back in history."

Sghayer is no fan of the moderate Islamist party now in power, Ennadha, though it should be noted that the government is not calling for a ban on alcohol.

What role does alcohol play in this country's culture and in its life?

"It's fundamental," he says. "You cannot abolish alcohol in Tunisia. Tunisian people are breathing oxygen and alcohol."

Since Tunisia's revolution, the company that brews Celtia has reported sales have actually increased.

And that company is a state-run enterprise. That means that technically the Islamist party now dominating the government is in the brewing business.

We decided to pour one more drink in a more contemplative place.

It's the business of Jacob LaLoush, who says he runs the only kosher restaurant in Tunis. He returned to his native Tunisia after spending years abroad in Paris. 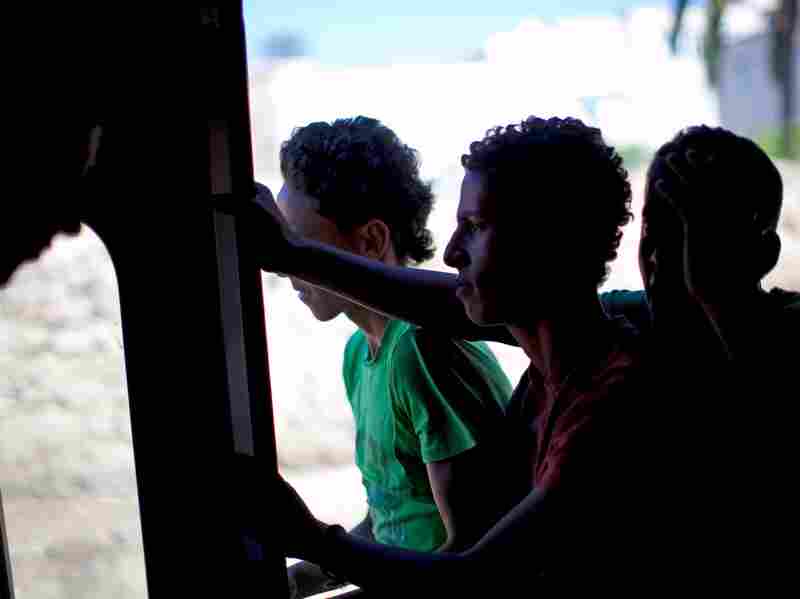 Children ride the train, hopping in and out of the open doors, from Tunis to the suburb of Sidi Bou Said. John Poole/NPR hide caption 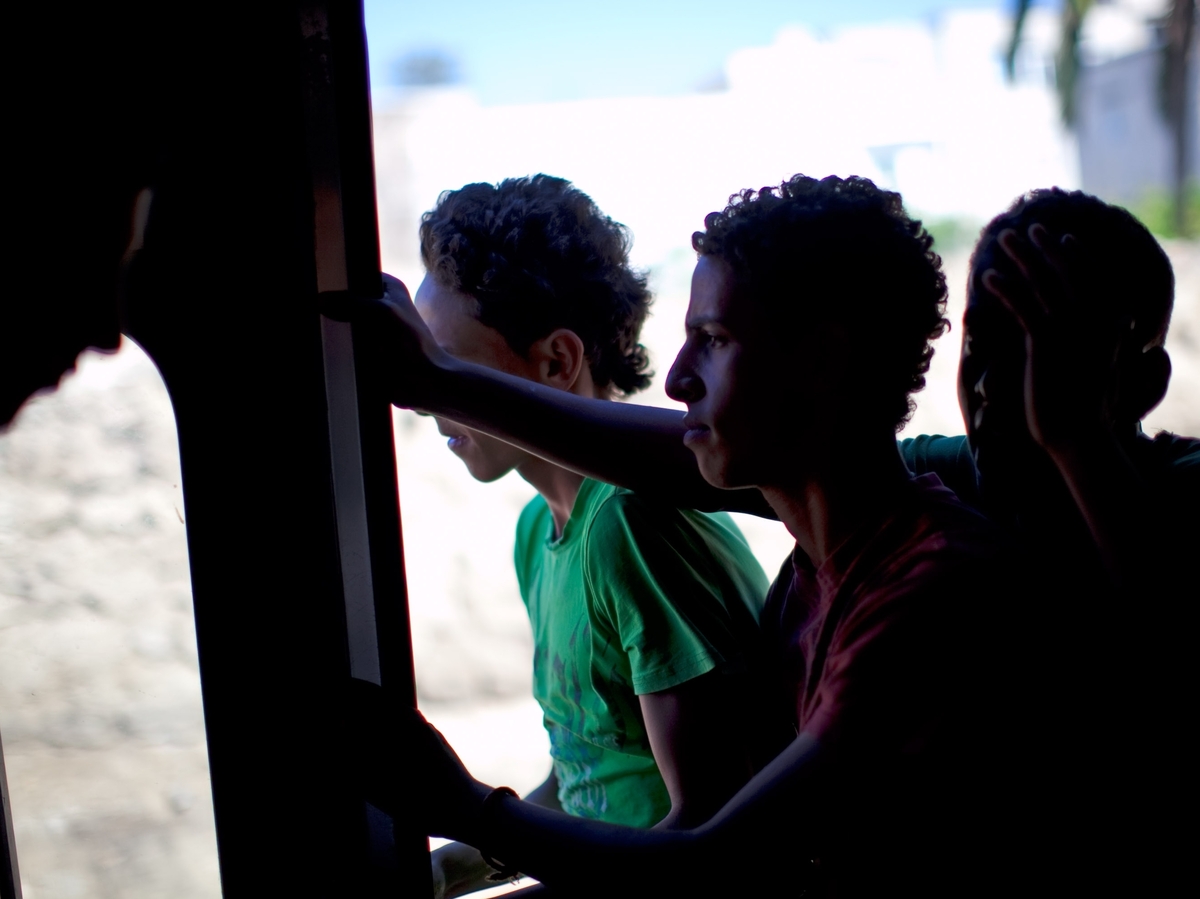 Children ride the train, hopping in and out of the open doors, from Tunis to the suburb of Sidi Bou Said.

"I divorced there and I came back here because I have a Jewish mother. You heard about the Jewish mother?" he asks.

We wanted to know about his restaurant, which he now runs with his mother.

He's part of a shrinking Jewish community in Tunisia, which used to be substantial, but now numbers fewer than 2,000. Jews were among many waves of people who've come to this spot on the Mediterranean coast.

"The people here come from all over the Mediterranean countries," he says. "All the people who arrived here brought with them their traditions, their recipes."

His menu draws on everything from Middle Eastern traditions to foods brought centuries ago from Spain by Sephardic Jews.

The menu also includes a Tunisian original — a drink made from figs, called bukha.

"It's a kind of Tunisian vodka. It was the basic drink in all the Jewish feasts," says LaLoush, who cannot drink any more because of medication.

And non-Jews have come to drink what's become known as a distinctive Tunisian national product. He goes to the freezer and comes back with shot glasses and a small green bottle, white with frost.

"When I put this bottle on my table I feel free," he says.