Accessibility links
Pack Your Bags For Six Flights Of Fantasy Need a ticket to otherworldly adventure? Look no further. Even if you're stuck at home this summer, these captivating fantasy novels offer great escapes — to the lands of dragons, cyborgs, lizard men and elven princesses.

Pack Your Bags For Six Flights Of Fantasy

Pack Your Bags For Six Flights Of Fantasy 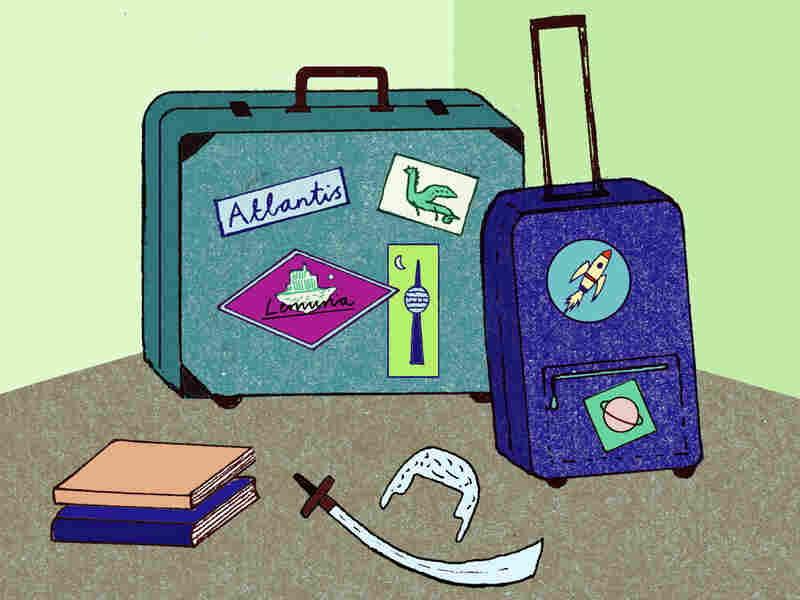 Can't afford the gas to take a road trip this summer? Not willing to spend a month's rent flying somewhere that's probably overcrowded and rainy anyhow? Empty pockets forcing you to embark upon that unholy phenomenon — gulp — the staycation?

How nice, then, that even if you're stuck at home, you possess, for free, in your very own brain, a truly amazing capacity to escape. You can lose yourself in other worlds without leaving the house and certainly without shelling out to stand in a security line. And you can find a cheap passport to those other worlds in the pages of any good fantasy novel.

Do you fancy hunting djinni through the winding alleys of a mystery metropolis? Or perhaps you'd like to try on the skin of an immortal cyborg who's pretending to be Rudolph Valentino's stunt man? Or maybe you'd like to take to the sky and fight the forces of Napoleon — yes, Napoleon — aboard a friendly dragon? Here are six of this summer's best tickets to otherworldly adventure.

N.K. Jemisin mixes ancient Egyptian magic and Jungian theory in her latest work, a tale of dream-hunting assassins in a city on the brink of war. The Killing Moon kicks off her second series, and like the books in her first (the excellent Inheritance Trilogy) it works as a stand-alone tale.

Ehiru and Nijiri are Gatherers of the city of Gujaareh, trained to enter people's dreams and guide them from life into death. These gentle deaths — usually welcomed — produce dreamblood, a magical substance on which the city depends. When a Gathering goes badly wrong, the two men realize that something dreadful is stalking the city's nights.

So spend a while visiting the dreaming city of Gujaareh, where peace is the only law. You won't regret it. And you won't have to wait long for the sequel, which comes out June 12.

A rip-roaring beach read, if your idea of a beach includes two moons and the hum and shimmer of an interplanary portal overhead. This first novel by British author Gaie Sebold follows the swashbuckling trail of the titular Babylon, madam of the finest brothel in the city of Scalentine, as she attempts to track down a missing girl in order to avert a political disaster. Oh, and did we mention she was once an avatar of the goddess of love and war? And that her former fellow avatars have tracked her across countless planes and are closing in for the kill?

This is sword and planet pulp at its finest — populated by a D&D manual's worth of lizard men, little blue mouse guys, doughty fighters and mysterious elven princesses. It's a feast of imagery; if you're like me and create a mental movie as you read, I promise you this one will be a smash. And yes, as befits the story of a brothel owner, there's a lot of unapologetic sex.

In the midst of the maelstrom, Babylon herself is smart, tough and matter-of-fact, even when she's doing unmentionable things with interestingly endowed lizard men. By the end of the book, you'll be just as at home in her world as she is.

Harrowing, but you won't be able to put it down. Nola, a young Seer, is born into poverty, but her powerful gift of Othersight gets her an invitation to study at the king's court. Dazzled by luxury and the legendary heroes of her land, Nola ends up a pawn in a terrible game of treachery and deceit.

The seemingly heroic sorcerer Teldaru has a gruesome plan to seize the throne — and an unwilling apprentice in Nola. Will she be able to escape his curse in time to save the kingdom? And will she be able to cope with the consequences of her actions?

Fantasy and science fiction novels often speak to larger anxieties — about race, class, technology — and can be read as modern parables. The Pattern Scars, on a smaller, more human, but no less powerful scale, has a lot to say about how relationships can become traps, and how monsters can be attractive and compelling.

It may sound grim for a summer fantasy read, but the spell Caitlin Sweet casts will stay with you long after you've finished the book.

The Best of Kage Baker

Oh, Kage Baker, why did you have to leave us so soon? Baker was a late bloomer, publishing her first story in 1997 at the age of 44 — which would have been fine, except that she died in 2010, depriving the world of her amazing voice. This volume of stories — many never collected before — is a lovely introduction to the worlds Baker created.

Front and center are several tales of The Company, otherwise known as Dr. Zeus, Inc., a truly Jovian future multinational that's mastered both immortality and time travel, enabling it to create deathless cyborgs and plant them at the dawn of time to do the Company's bidding through the centuries.

California was Baker's home, and it's where many of her best works are set, like the tale of 35,000-year-old Joseph, disguised as a low-level Hollywood macher, trying to solve the mystery of a stolen Rudolph Valentino script during a weekend at William Randolph Hearst's California castle — while avoiding the small yappy dogs belonging to a shady occultist who may have pilfered the script.

Other stories involve a piratical artificial intelligence, the proprietress of the best tavern on Mars and a chronically drunken young socialite who just happens to be the son of the local demonic Dark Lord.

Baker may have started late, but she made the most of her time. If you enjoy these stories, there's a small library's worth out there waiting for you — begin with the first Company novel, In the Garden of Iden, and you're in for a treat.

Throne of the Crescent Moon

Doctor Adoulla Makhslood is "the last real ghul hunter in the city of Dhamsawaat." He's almost retired: he's old, he's fat, his joints creak, and all he wants is a good cup of cardamom tea from his friend Yehyeh's teahouse.

But rebellion is roiling in Dhamsawaat as the corrupt ruler faces off against a charismatic crime lord. After an old flame's family is attacked by demons, the venerable Doctor ends up taking one last job.

Makhslood, his uptight young dervish sidekick Raseed, and the young tribal shape-shifter they rescue make for an unlikely but effective demon-hunting team in this colorful debut novel (though really, no points for guessing Raseed would fall for Zamia the shape-shifting lion girl).

But the keenest pleasure in this book is spending time in the great and detailed city that Saladin Ahmed creates: visiting the roasted nut vendors on Gruel Lane (it was originally named for a king, but no one remembers him), making purchases at the alchemist's shop, and being glad you're not stuck in the cart jams that keep our heroes from rushing to the rescue as quickly as they'd like.

Throne of the Crescent Moon is a satisfying swashbuckler with solid characters and marvelous world-building — and Makhslood and Raseed are a nice contrast to the lily-whiteness of many fantasy novels.

A Novel of Temeraire

When so much thought and care has gone into creating a world, authors and readers both want to spend more than the span of one book exploring it. This is why it can seem almost impossible to find a good fantasy novel that's not part of a series. Now, my editor did tell me I couldn't include books that happen to be number five or six or 12 in a series. But what can I do when there's a new Naomi Novik book out?

Consider this selection a bonus.

Crucible of Gold is the seventh volume in the globetrotting Temeraire series, which is probably best described as "Patrick O'Brian with dragons." Novik paints a vivid picture of the Napoleonic wars, except that these Napoleonic wars involve an air force of massive dragons, crewed and armed much like warships of the day (midwingmen, ahoy!).

She has the elegant language of O'Brian's books down pat, but more than that, she'll make you fall in love with the characters. Temeraire is the young dragon at the heart of the series, and watching him grow up and discover his Chinese heritage — and develop the beginnings of a dragony political conscience — is just as fascinating as the well-drawn aerial battles.

Start with volume one, His Majesty's Dragon. Go on, go get it. Right now. I'll wait. Got it? Good. Happy travels!