Accessibility links
A Party On The Rise, Germany's Pirates Come Ashore It doesn't have a plan to save the euro or clear policies on an array of issues, but the German Pirate Party is winning converts and elections with its vision of digital democracy through "liquid feedback." 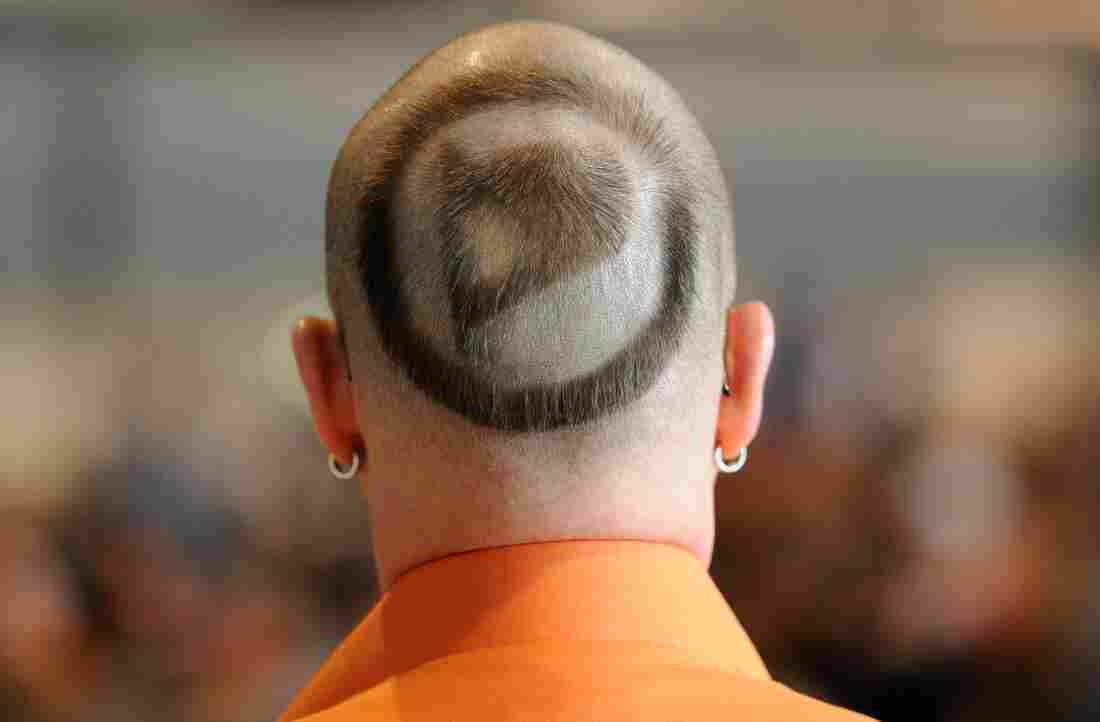 A member of the German Pirate Party, with its logo shaved in his hair, attends the party's two-day conference in Neumuenster, Germany, on April 28. AFP/AFP/Getty Images hide caption 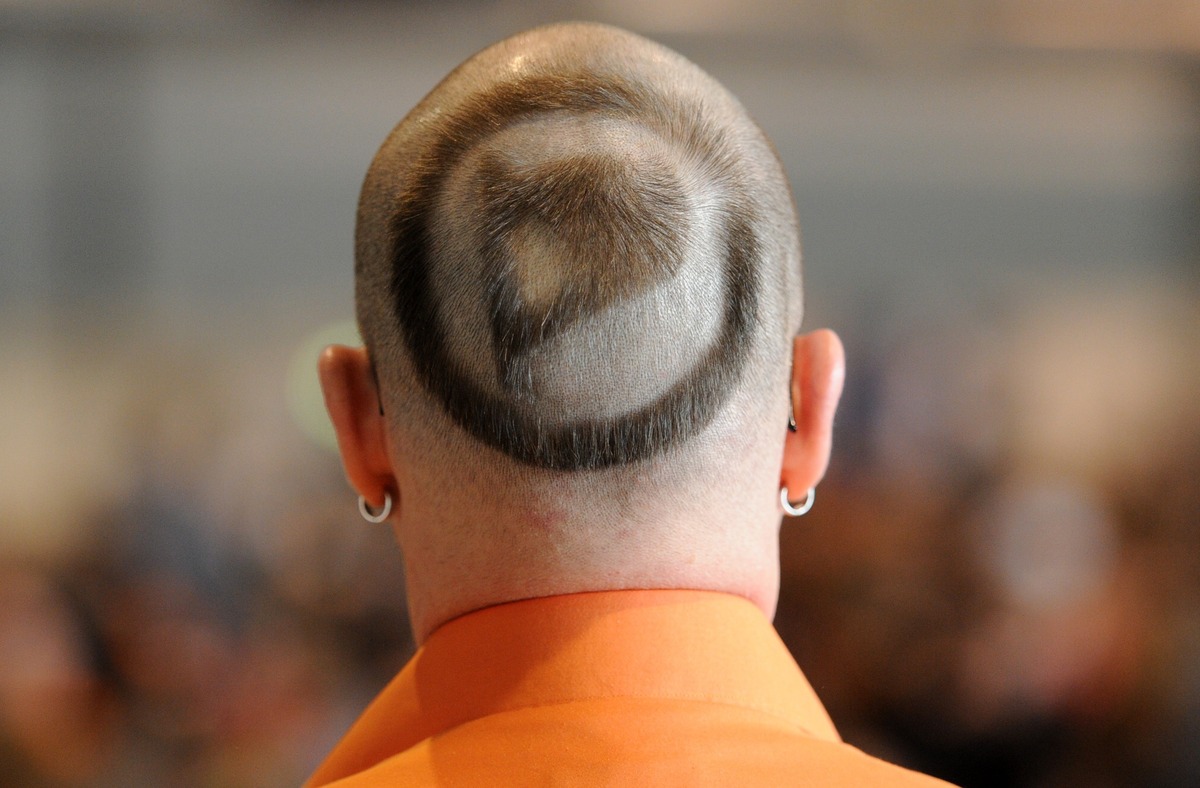 A member of the German Pirate Party, with its logo shaved in his hair, attends the party's two-day conference in Neumuenster, Germany, on April 28.

They don't have a plan to save the euro or draw down the war in Afghanistan, nor do they have clear policies on an array of issues, but the German Pirate Party is winning converts and elections with its vision of digital democracy through "liquid feedback."

Despite public relations mishaps and a haphazard organizational structure, the Pirate Party is shaking up the stolid, bureaucratic world of German politics and jolting rival parties with its rising popularity. 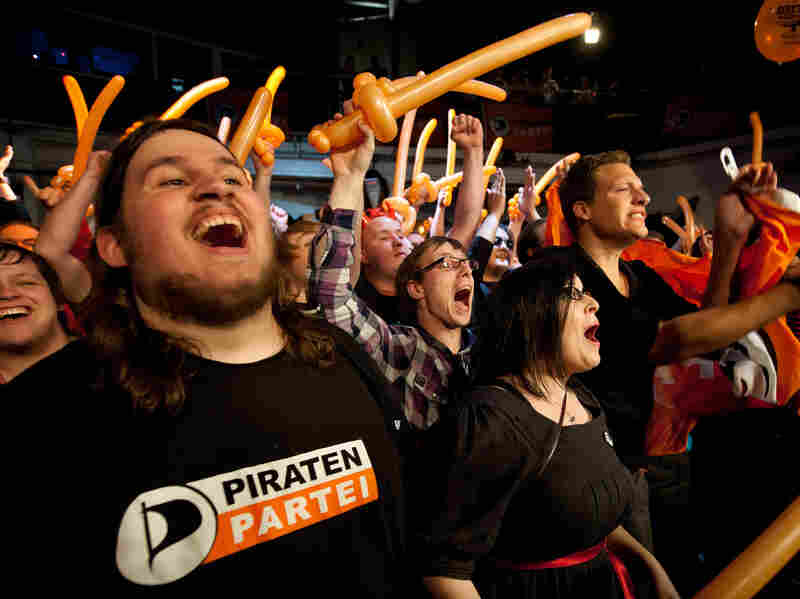 Supporters of the Pirate Party react after early results are announced during elections in Duesseldorf, Germany, on May 13. Patrick Sinkel/AP hide caption 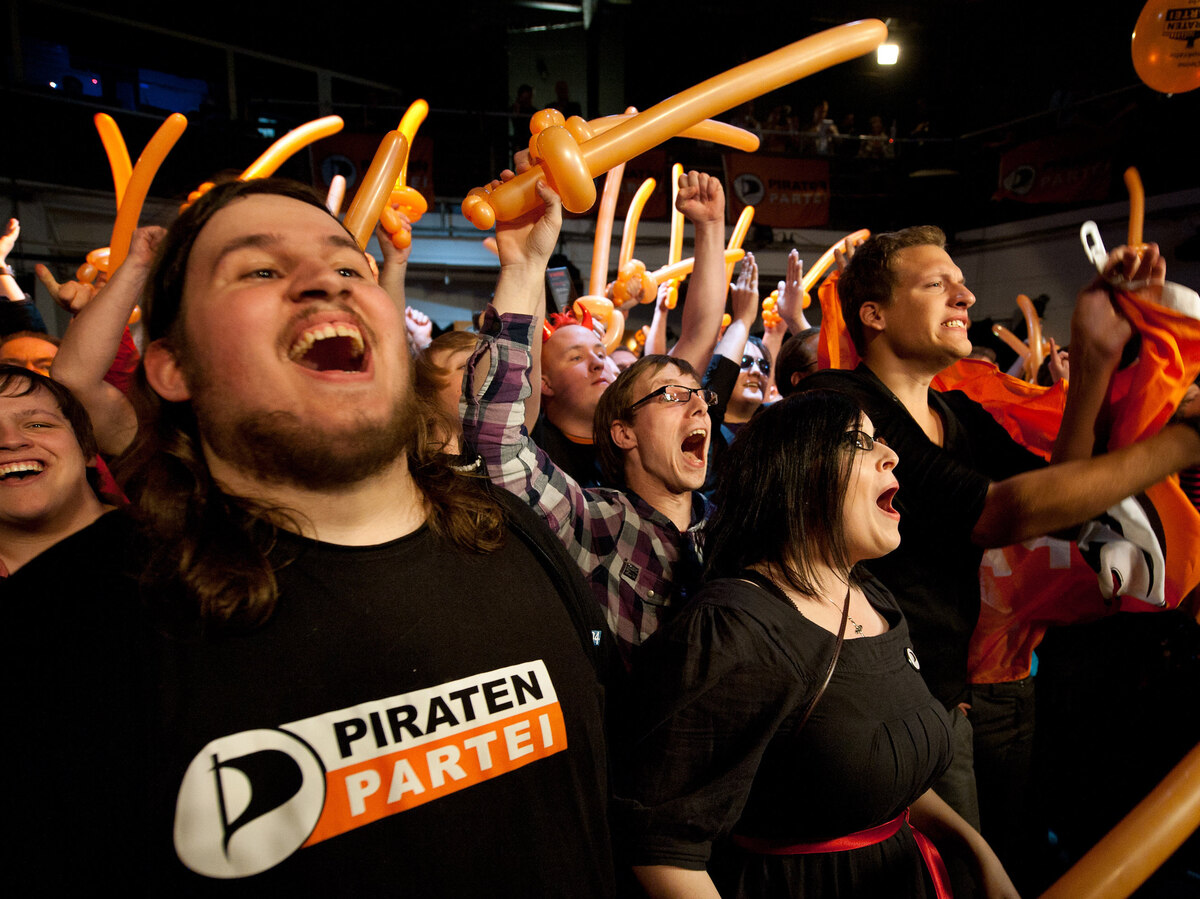 Supporters of the Pirate Party react after early results are announced during elections in Duesseldorf, Germany, on May 13.

On Tuesday night in Neukolln, a disheveled yet trendy Berlin district, the Kinski Bar buzzes like it's the weekend. The sparsely furnished tavern is filled with casually dressed 20-somethings chatting, laughing, smoking and debating in between bites of pizza and sips of cheap draft beer. As it is every Tuesday, it's Pirate Party night. It's a night for political discussion, not a party party, but it can sometimes be hard to tell the difference.

"Many things of the Pirates are so unprofessional and thereby so charming that you see, 'Well what they can do, I can do also; I can contribute to this,' " says 29-year-old Thorsten Fischer. Dressed in a casual, hip outfit of a pastel-colored T-shirt, skinny jeans and a smart haircut, Fischer belies the image painted in some of the German press that the Pirates are all computer nerds.

Fischer is now working on his second startup company, developing an app for mobile devices. In some ways his entrepreneurial spirit brought him to the Pirates. He says he was attracted by the party's tech savvy, libertarianism that stresses freedom of expression, transparency in government and Internet freedom.

"People don't want people to tell them how it should be," he says. "They have their own ideas about these things and that is something that really resonates with many people, and not only of my generation, but if you have an open mind, for everyone."

Another recent Pirate convert, 26-year-old Xenia Miheeva, points out that the Pirates are no fad; they've now won seats in four state parliaments, including in Berlin and Germany's most populous state, North Rhine Westphalia. They're now the fourth-most-popular party in Germany.

"More and more people realize the Pirates have a totally different style of doing politics ... that's like a mix between sexy and complicated, boring bureau things because you actually can be a part of it," Miheeva says. "You feel that your voice is heard."

Pirate Party voices are heard in Internet chat rooms and forums where issues and ideas are discussed and fed into an online forum the Pirates call "liquid feedback." The party sees this as expanded participatory democracy for the digital age: a way everyone can take part in real-time cyberdebates to come up with practical solutions and help formulate policy. 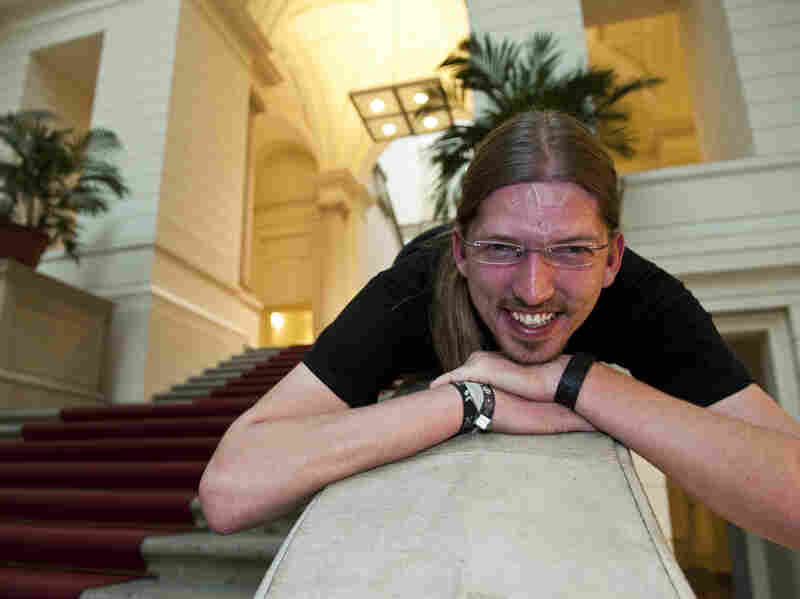 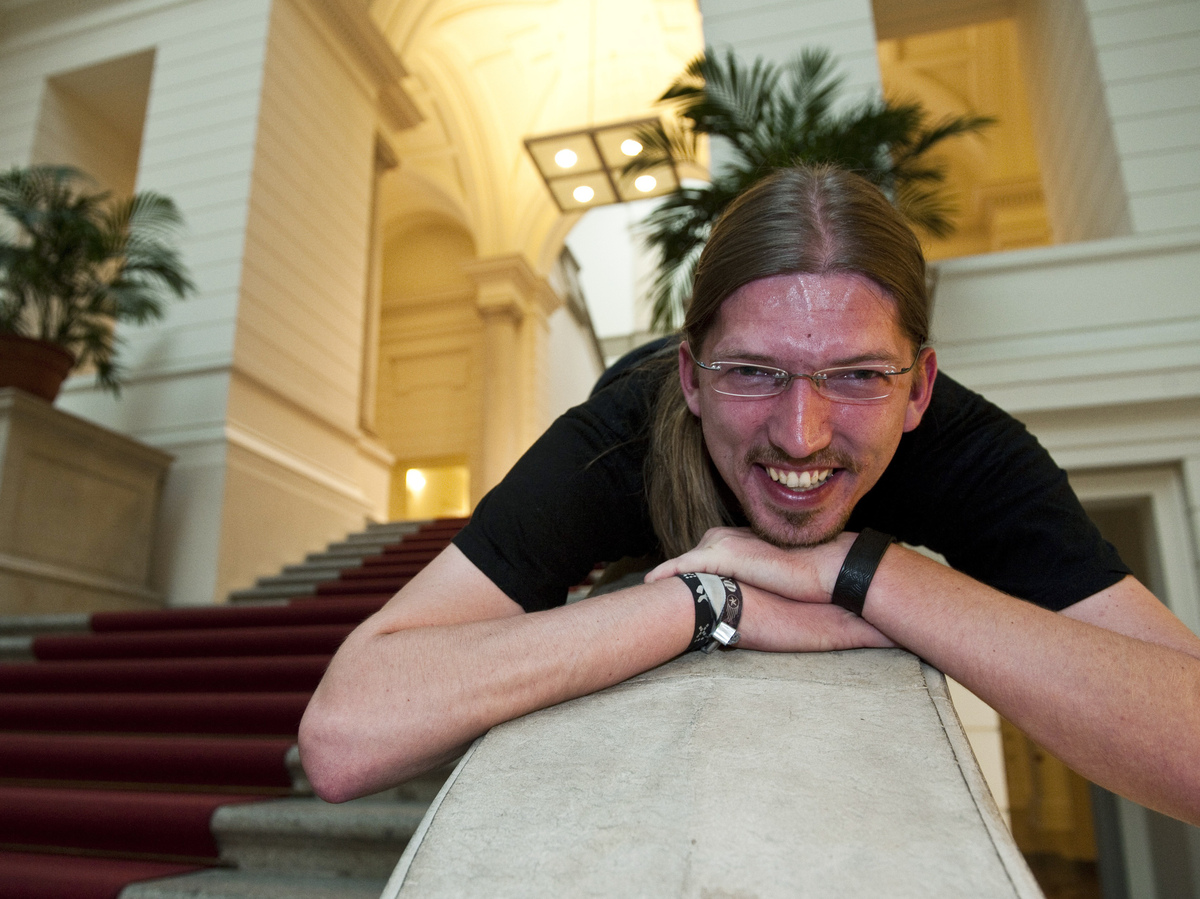 Martin Delius, the Pirates' chief whip, studied physics and computer programming and did not plan on becoming a politician.

"People see us as honest amateurs. We try to keep honest with our flaws," says 28-year-old Pirate Martin Delius. "If we cannot do something, we would say it. We would say, 'We are not able to solve this problem as politicians.' And this is what people are looking for, because they always have the idea that politicians are not telling the truth or not telling the whole truth. It may be a Zeitgeist to vote for amateurs."

Delius grew up in a small town in Brandenburg, outside Berlin. He studied physics and computer programming and did not plan on becoming a professional politician. He is now the party's chief whip in the Berlin city-state parliament. He was attracted by the "liquid feedback" approach to issues and harnessing the free-wheeling nature of the Internet for far more than status updates and recipes.

"That is the substantial issue of the party: Do not restrict the free flow of information because there is so much good coming out of it that it weighs up all the bad things that can happen," he says. "What is still important to the party is to have fun and be ironic with yourself, to try not to be self-satisfied because that's what is left out in politics."

Next year, the Pirate Party faces a key test as it fields candidates for Germany's federal parliament, the Bundestag, as it pushes to expand its presence on the national and world stage.

There have been, however, some key missteps along the way. Delius was recently forced to apologize when he said that politically the Pirates are rising as fast as the Nazi Party did in the late 1920s. It may be factually accurate, but the comment was slammed as tasteless and clumsy. Some wondered if the Pirate's free-speech ethos means a lax attitude toward the far right.

There have also been other public relations missteps and signs of internal fights. Several senior officials, including press spokesmen and a former treasurer, recently quit amid accusations of petty power plays, acrimony and political back-stabbing. Party faithful say that's all just the natural growing pains of a new, inexperienced party.

"We are breaking through the traditional political feedback structures and getting a lot more feedback than other politicians with our open structures and communicating and finding party positions via the Internet," Delius says.

But that approach to policy also raises questions about how to separate thoughtful ideas from polemics by provocateurs and pranksters who troll the Web. The Pirates use complex algorithms to create fast, collective decisions, but they've yet to really show that "liquid feedback" can actually shape substantive, timely legislation or policy. And there's fear their Web-based approach could veer toward a kind of Google-ocracy: democracy as algorithm.

"The ridiculous truth about the Pirates is that they take our proposals from parliament and put it into their liquid feedback system to discuss about it," says Volker Beck, a senior member of the German Green Party. "They are taking up our content and propose them as their own."

The Pirates' rapid rise has the Greens and some other established parties a little scared. Polls show the Pirates are catching up, and in some parts of the country, surpassing the Greens and Chancellor Angela Merkel's ruling Free Democrats Party. Beck, the Green's federal parliamentary whip, complains that the Pirates are living off their gimmicky "liquid feedback" and thriving despite incoherent positions.

"I don't see any social, financial [or] economical program of this party. Are they on the left, are they on the right? Are they for saving the euro or are they against? Are they for fiscal consolidation or are they for more debts?" Beck says. "They put out ideas which don't fit together to a program. It's more a collection of several points which have nothing to do with each other. On everything I have no clear idea what the party is standing for."

Beck sees the Pirates' rise as partly an old-fashion protest against the political establishment and a reaction to the uncertainty created by the eurozone's debt crisis, which has shaken faith in the single currency and the larger European project of integration.

"Many people don't really know what can be the actual response to the financial problems that we face within the crisis of the eurozone, so that they just vote for anything and don't know the answer on a question," he says. "So they vote for a question mark instead of a clear response."

The Pirate Party's Delius counters that the Greens in Germany and across Europe may have done incredible things politically over the last 30 years, but he says, the Greens are "now establishment and boring."

"One-third of our voters are coming from the people who didn't vote before," he says. "So that is good for democracy, that is a good sign."