Accessibility links
What Wisconsin's Recall Means For Labor Unions The unsuccessful attempt to oust Wisconsin Gov. Scott Walker may well embolden governors of other states to challenge unions in order to curb collective bargaining rights. One labor studies professor put it this way: "There will be other dominoes; other states will fall." 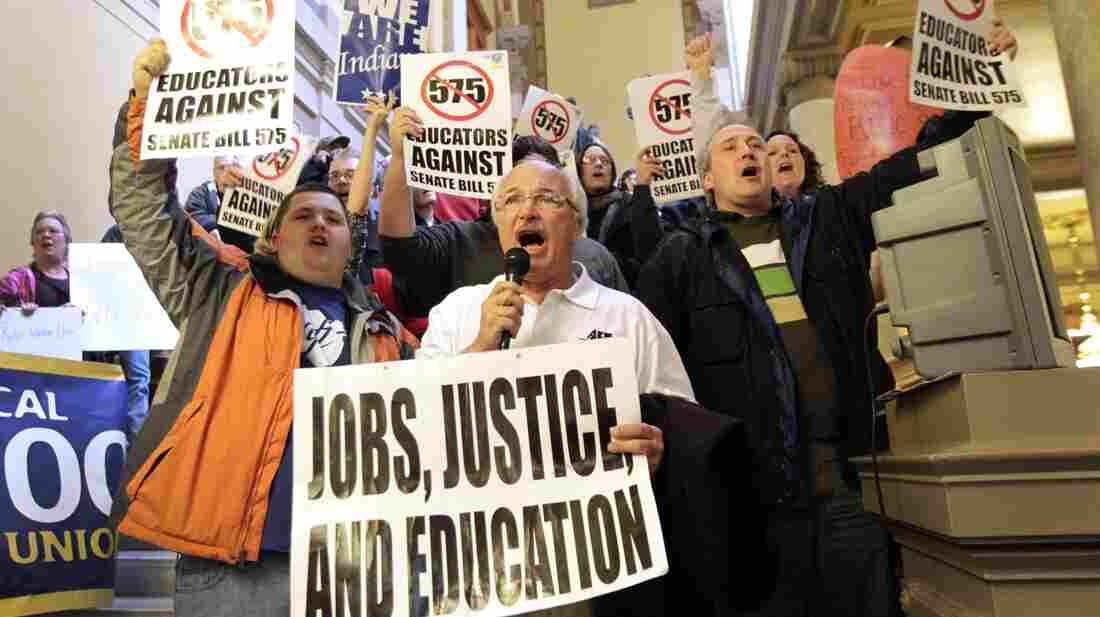 Rick Muir, president of the Indiana Federation of Teachers, chanted with other protesters at the Statehouse in Indianapolis in February 2011 over legislation limiting collective bargaining for teachers. Months later, it became law. AJ Mast/AP hide caption

The Wisconsin recall election might have failed, but it succeeded in sending an ominous message to pro-labor forces across the nation — especially in the Midwest, where a handful of legislatures are pushing to roll back collective bargaining and other union rights.

The vote against Republican Gov. Scott Walker was prompted by his support for a law limiting collective bargaining for some public sector employees. His victory Tuesday night could embolden governors in states such as Ohio, Indiana and Missouri to push back harder on labor rights.

'Other States Will Fall'

"It's a bellwether for sure," says labor studies professor Marquita Walker of Indiana University-Purdue University, Indianapolis, who joined the ranks of those who fought against an Indiana right-to-work law supported by Gov. Mitch Daniels. Indiana is among nearly two dozen states that have passed similar laws.

Wisconsin: Gov. Scott Walker curbed collective bargaining for some public sector employees, triggering a massive, months-long protest and an unsuccessful recall vote. Speculation is that Walker's next move would be to push right-to-work legislation that would bar unions from forcing employees to join or requiring members to pay dues.

Ohio: A Republican-passed law that stripped state and local employees of most of their collective bargaining rights was repealed last year. Anti-union activists are collecting signatures to get an amendment on the November ballot to make Ohio a right-to-work state.

New Hampshire: Democratic Gov. John Lynch vetoed a GOP-sponsored right-to-work bill. Republicans have reintroduced a bill in the state Senate, which has been tabled.

Missouri: Republicans in the state Legislature are pushing a right-to-work law.

Minnesota: Right-to-work legislation has been tabled.

Michigan: GOP Rep. Paul Scott was recalled last year over his support for ending collective bargaining for teachers. GOP lawmakers are pushing for a constitutional amendment to make Michigan a right-to-work state.

Maine: Right-to-work legislation has been tabled.

Indiana: Gov. Mitch Daniels rescinded collective bargaining for state employees in 2005 and signed a right-to-work bill into law in February, despite labor-organized protests.

Brett Voorhies, president of the Central Indiana Labor Council, told The Indianapolis Star on Wednesday that Wisconsin could prompt local governments to eliminate collective bargaining for teachers and firefighters.

"There will be other dominoes; other states will fall," says Walker, who is no relation to the Wisconsin governor.

"This could have a negative impact on the power and strength of the labor movement," he says.

Alaine Williams, an attorney who represents public employee unions in Pennsylvania and Delaware, agrees, saying, "I worry that this will embolden those who desire to diminish the role of unions."

"I don't think we can get pushed around anymore by Big Labor," Republican National Committee Chairman Reince Priebus told Politico.

Unions have lost some of their clout, not to mention dues-paying members, in states such as Wisconsin and Indiana that have passed right-to-work laws. Those laws require that employees be allowed to work without joining a union or paying dues or fees. Similar legislation is being considered in Missouri and in Ohio, despite the fact that Ohio voters repealed a law limiting collective bargaining last year.

Not everyone thinks the Wisconsin vote is gloom and doom for organized labor. Bob Bruno, a professor of labor and employment relations at the University of Illinois, thinks few governors have a taste for the kind of all-out confrontation that Walker incited by curbing collective bargaining rights. That sparked off a months-long protest that drew tens of thousands of protesters to jam the state Capitol and culminated in the recall vote.

"Probably governors will look at the whole battle and conclude that there's a better way of making the kind of changes that they want to make than setting off this kind of political challenge," Bruno says. "I imagine you will find governors being a bit more strategic in their approach to these sorts of things."

In pushing to oust Walker, labor joined forces with nontraditional allies — something Bruno says could prove valuable in future confrontations.

"Labor was not really at the forefront as much as were students, the community, farmers' groups," he says. "This could bear significant fruit in the November elections and beyond. Labor has learned that the nonunion community is something it can build alliances and relationships with."

But Adler says anti-union momentum is building among state and local governments because of the U.S. economic crisis, which has left many of them with gaping holes in their budgets. Wresting power from the unions could make it easier for them to cut payrolls and worker benefits.

"Revenues have dried up so substantially that almost every municipal government in the United States is having difficulties," he says.