Accessibility links
Prayers Divided Over Gay-Marriage Ban In Minnesota Catholic bishops pushed to get a measure onto the November ballot that defines marriage as between one man and one woman in the state constitution. Now the church is the largest campaign contributor in the marriage amendment debate. But not all Catholics are onboard. 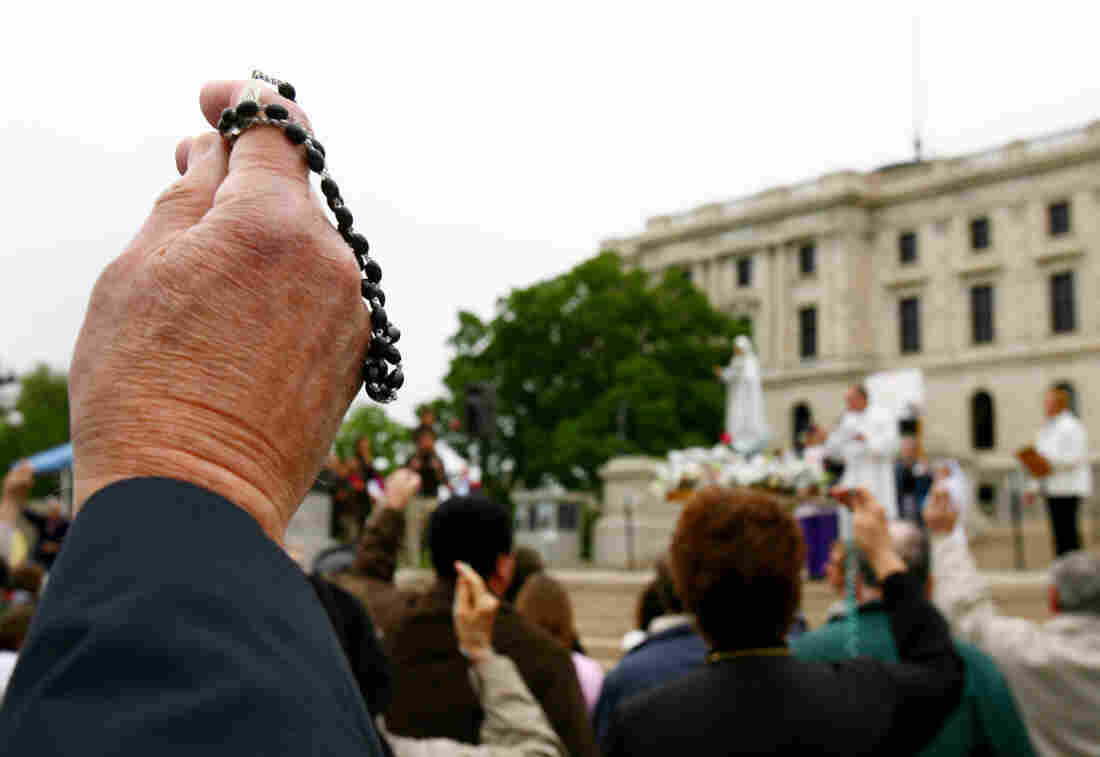 Catholics gather outside the Minnesota Capitol in St. Paul for the Family Rosary Procession on May 6. They marched from the Capitol to the Cathedral of St. Paul in support of an amendment that would define marriage as between one man and one woman. Alex Kolyer/for MPR hide caption 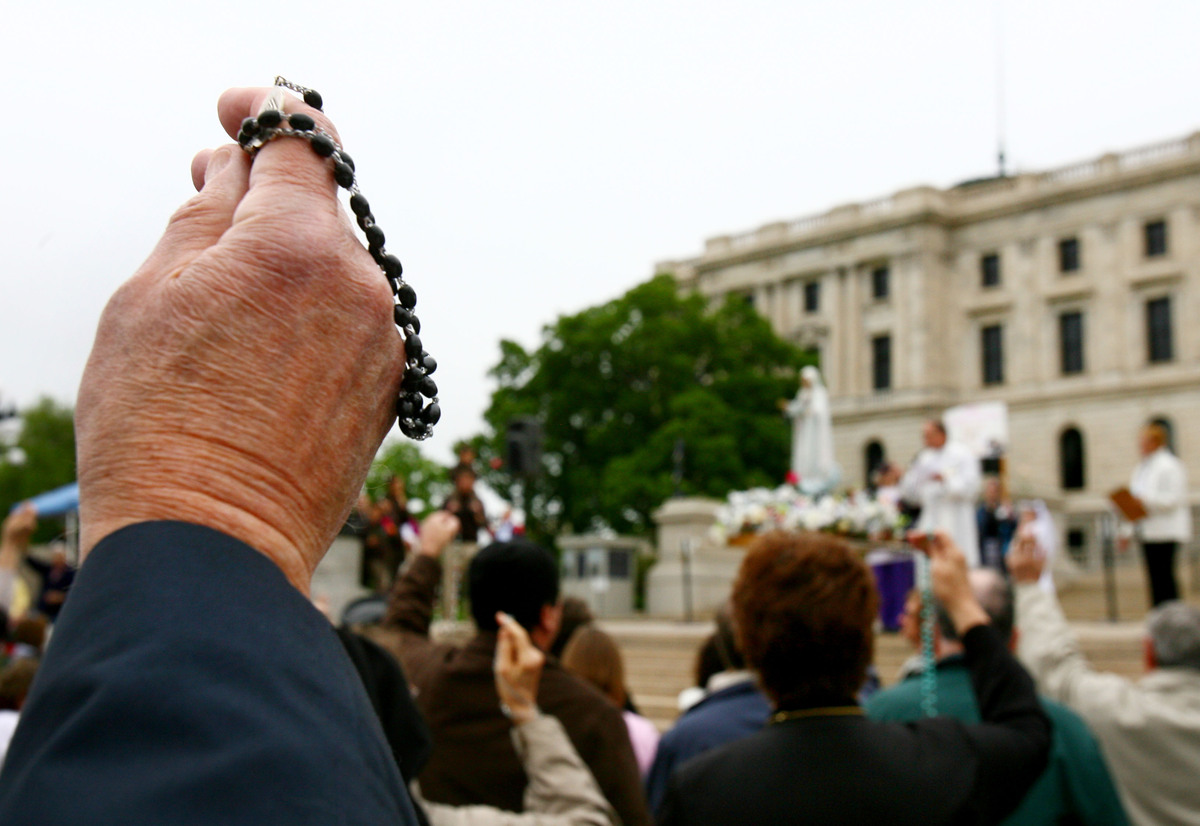 Catholics gather outside the Minnesota Capitol in St. Paul for the Family Rosary Procession on May 6. They marched from the Capitol to the Cathedral of St. Paul in support of an amendment that would define marriage as between one man and one woman.

Two domes dominate the skyline of St. Paul: up high, the Roman Catholic Cathedral of St. Paul, and downhill, the Minnesota Capitol. On a recent Sunday afternoon, hundreds of Catholics assembled on the steps of the Capitol for the annual Family Rosary Procession.

"How do we define marriage?" the crowd was asked. Their response: "One man and one woman!"

An auxiliary bishop in purple robes, Knights of Columbus in their plumed chapeaus and capes, and a white statue of the Virgin Mary led the faithful up to the cathedral, reciting the rosary.

Last year, the Minnesota Legislature approved a measure to be added to the November ballot that would add Minnesota's current definition of marriage — as only between a man and a woman — to the state constitution. Catholic bishops pushed hard to get the measure on the ballot, sending a DVD to every Catholic household in the state.

Catholics make up the single largest religious denomination in Minnesota, and the bishops are marshaling their full forces on the marriage issue. They've added a Prayer for Marriage to Mass that asks for "courage to proclaim and defend [God's] plan for marriage, which is the union of one man and one woman in a lifelong, exclusive relationship."

Parishes are assigning "church captains" to educate parishioners and get out the vote.

"As far as I'm concerned, as a Catholic, this is about protecting the rights of kids whenever possible to be raised by their mom and dad and that's why I am active on this issue," says Michael Blissenbach, a 25-year-old church captain from Hastings, a Mississippi River town outside the Twin Cities.

Blissenbach says he's also concerned how the church and religious organizations like Catholic Charities could be affected in their adoption and foster care work if same-sex marriage were ever legalized in Minnesota.

Volunteers play an important grass-roots role in getting the church's message out. But bishops are also contributing financially. Three dioceses donated $750,000 to the Minnesota Catholic Conference Marriage Defense Fund, more than half the money raised on the pro-amendment side.

"It takes money to speak in a democracy, and it takes a lot of it these days," says Jason Adkins, who heads up the lobbying effort. "It's going to be an important debate and so we need to raise the money, and the Catholic Church is very committed to getting that message out and so we're going to raise and spend the money we need to do that."

Not all Catholics are onboard with the bishops.

On Tuesday nights, a group of 40 or so Catholics who oppose the amendment meet to pray the rosary at the Cathedral of St. Paul.

"We wanted to do something as a respectful sign of our dissent," says Barb Frey, one of the organizers. "And what we also wanted to do was to reach out to other Catholics who we believe think in their heart that this is unjust and a wrong direction for our church leadership and to let them know that they're not alone."

The first time they showed up in April, the cathedral's rector told them they could pray the rosary, but only in silence.

Many of those who come have gay or lesbian children.

"I have a lesbian daughter who's in a relationship that's very beautiful, has two little daughters," Larry Schaeffer says. "I don't see this relationship any different than my other two daughters or my son. Gay people are not the enemies of marriage."

Mary Jo Spencer also has a lesbian daughter. Spencer is from "heavy Catholic stock," as she calls it, but her patience with church hierarchy has grown thin.

"I can say I have not gone to the Catholic Church for a number of years and it is this that has brought me back," she says.

Catholics on both sides say they'll continue to pray the rosary and hope for opposing outcomes on Election Day.