Accessibility links
How Dorothy Parker Came To Rest In Baltimore Dorothy Parker considered New York City to be her beloved hometown: It's where she grew up, where she wrote many darkly humorous poems and short stories, and where she became famous. But today, Parker's ashes can be found not in New York, but in Baltimore. 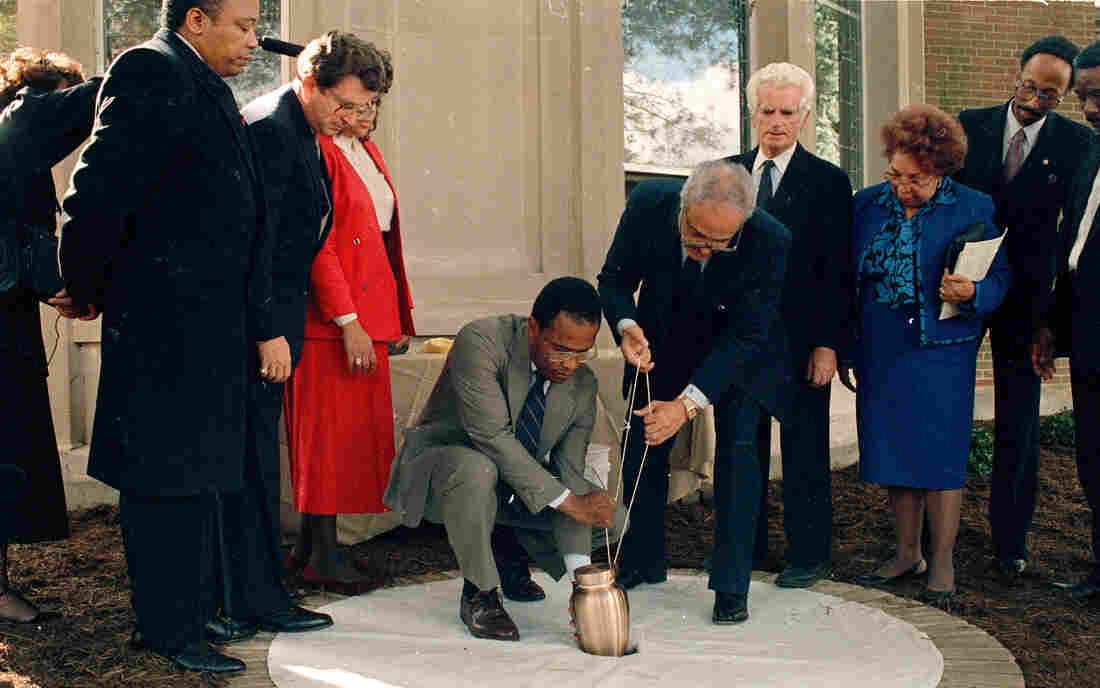 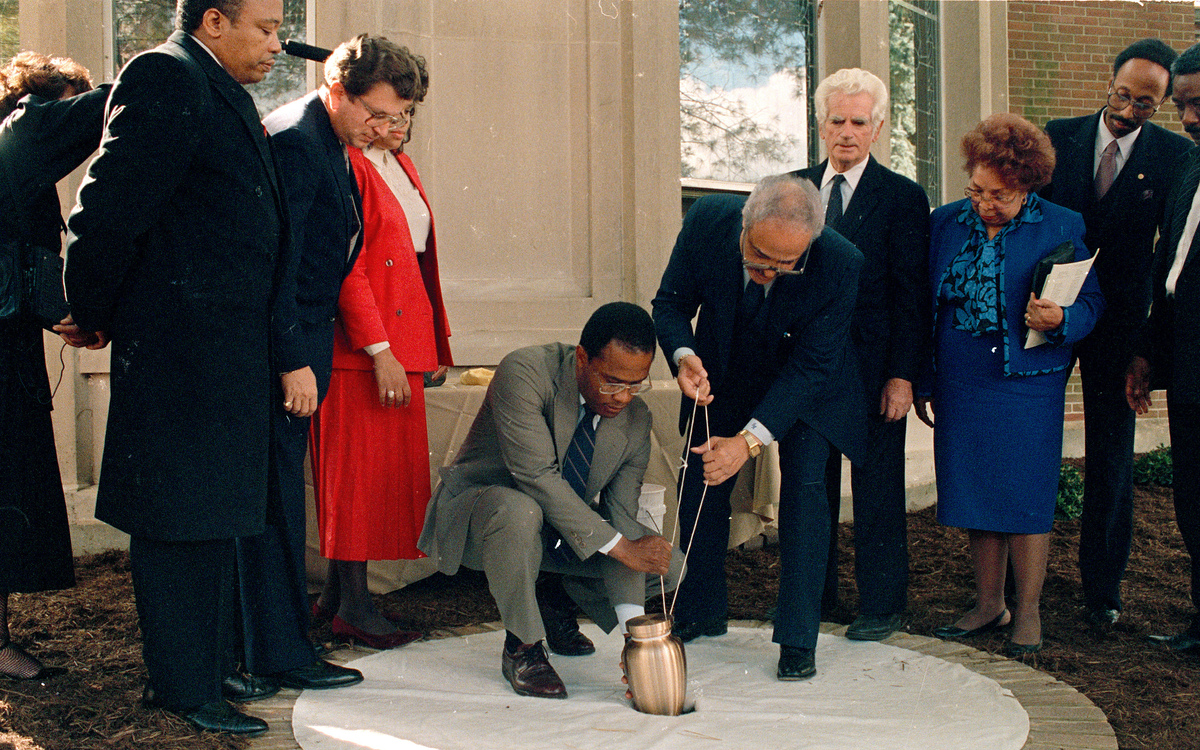 The writer, poet and critic Dorothy Parker was technically not a native New Yorker; she was born at her family's beach cottage in New Jersey. But she always considered New York City to be her beloved hometown. It's where she grew up, where she struggled during her early days as a writer, where she became famous, and where she died of a heart attack at the age of 73.

Today, her ashes can be found not in New York, but in Baltimore at the headquarters of the National Association for the Advancement of Colored People, which is located on the outskirts of the city and surrounded by a corporate office park.

The story of how this New Yorker ended up in Baltimore starts with Parker's unusual last will and testament, explains James Murray, the librarian and archivist at the NAACP.

"In her will, she stated that Martin Luther King should be the one to have her estate," he says. 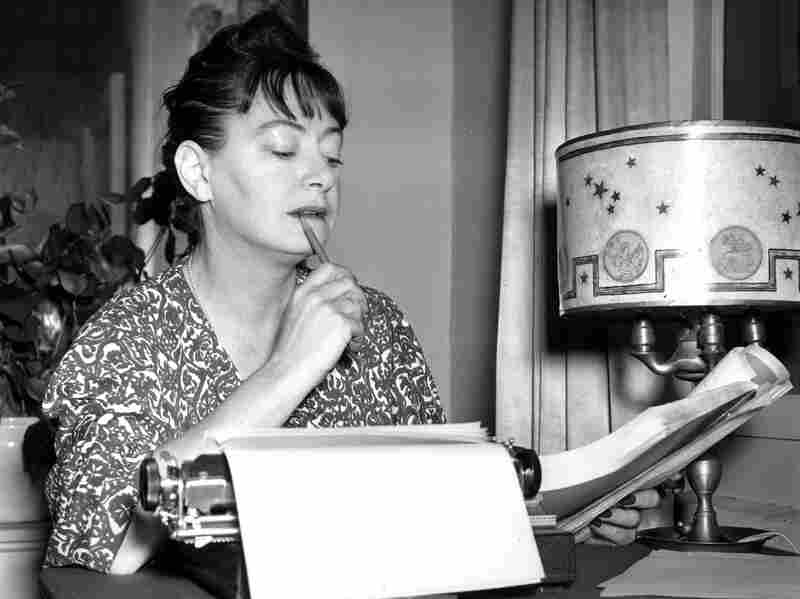 Author Dorothy Parker works at her typewriter in 1941. After her death at 73, Parker's ashes were stored in a file cabinet until being interred at NAACP headquarters in Baltimore. AP hide caption 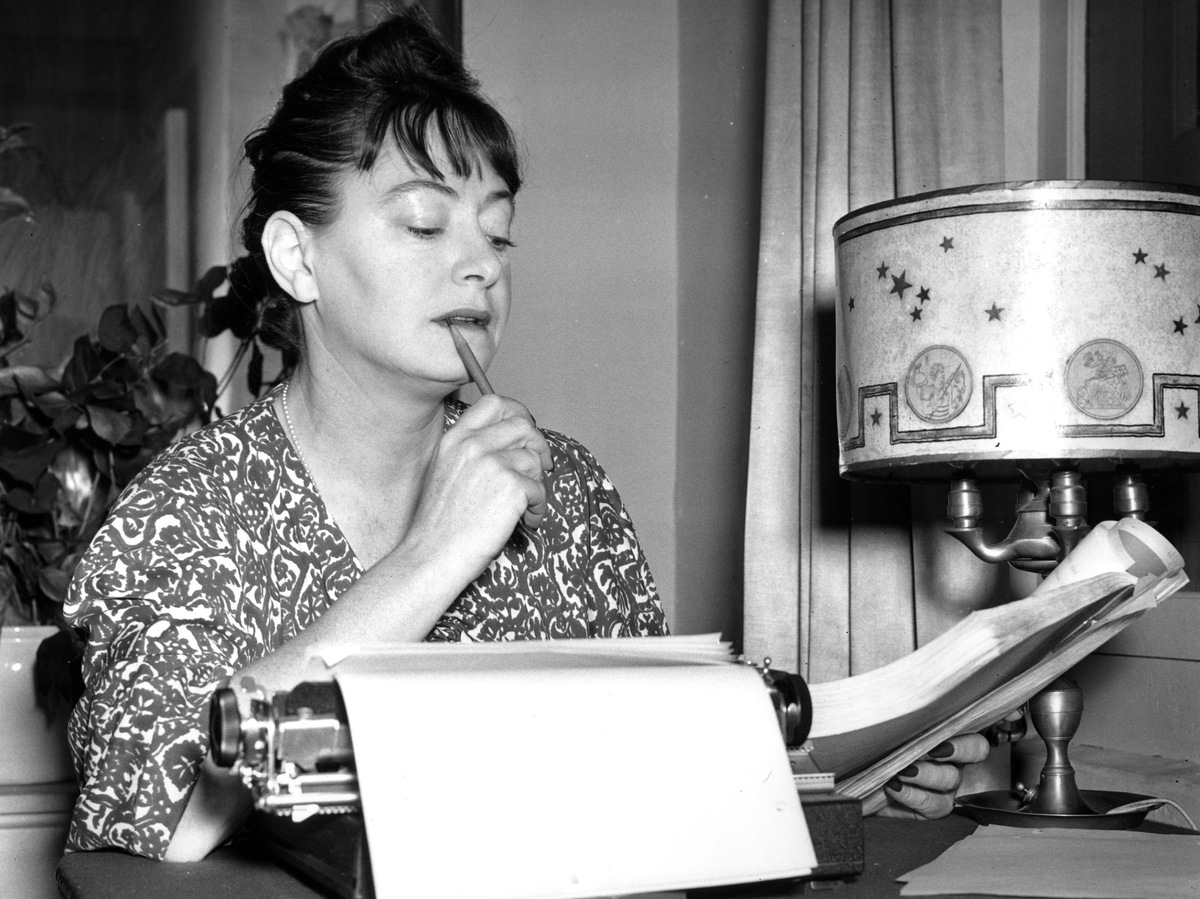 Author Dorothy Parker works at her typewriter in 1941. After her death at 73, Parker's ashes were stored in a file cabinet until being interred at NAACP headquarters in Baltimore.

The civil rights leader was reportedly surprised by the bequest; he and Parker, who died in 1967, had never met. Less than a year later, King was assassinated, so another part of Parker's will kicked in: "If something should happen to Martin Luther King," Murray says, "she would like for her estate to be turned over to the NAACP."

Even today, the NAACP controls Parker's literary rights. In her writings and her life, Parker sympathized with the oppressed. Her 1927 New Yorker story "Arrangement in Black and White" deftly mocks people who claim not to be racist but act incredibly condescending and prejudiced.

Parker isn't known to have had connections with Baltimore during her lifetime. She once made a spontaneous visit and ended up meeting the writer H.L. Mencken. When Mencken began telling derogatory jokes about blacks, Parker abruptly left and went back to New York. "Dorothy didn't feel comfortable," Murray says.

It's impossible to know if she'd be comfortable with her current Baltimore stay.

Next to the NAACP headquarters building, near their parking lot, there's a group of pine trees. A brick path under the trees ends with a circle of brick meant to evoke the Round Table at the Algonquin Hotel, where Parker used to lunch with her witty friends. There's a plaque with an inscription that includes an epitaph she once suggested: "Excuse my dust."

Murray says the memorial gets dozens of visitors each year. "Most of them are from out of town, not local," he says. "We get people from Hollywood, lots from New York and from overseas."

Baltimore may not be New York, but it's a step up from Dorothy Parker's previous resting place: a filing cabinet in the office of New York attorney Paul O'Dwyer, where Parker's remains sat for around 15 years.

"Dorothy Parker left instructions that she be cremated, but she left no instructions as to what was to be done with her ashes," O'Dwyer told NPR in 1988. His office represented the writer Lillian Hellman, a friend of Parker's who was the executrix for her estate.

In 1987, O'Dwyer was chatting on the phone with Marion Meade, who was writing a biography of Parker. Meade mentioned that she wanted to visit Parker's grave and was startled when O'Dwyer said, "I'm looking right at her."

Soon after, O'Dwyer held a meeting. Reporters and others gathered at the Algonquin Hotel. Someone suggested keeping her remains at the bar, but O'Dwyer said the hotel didn't like the idea. He and the NAACP wanted the ashes in Baltimore.

"A murmur of dissent waved through the Oak Room," according to a 1988 account of the meeting in Newsday. "It was unthinkable that the ashes of such a quintessential New Yorker should leave home."

Even today, some New Yorkers would like to see Parker come back.

Kevin Fitzpatrick, the founder of the Dorothy Parker Society of New York, says the memorial garden was a nice gesture by the NAACP.

"You know, it is what it is. It's a nice little thing that they have outside their headquarters," he says. "I'm certainly not going to start, you know, a war with Baltimore to try and get her moved back."

But if the organization ever moves its headquarters, Fitzpatrick says, he hopes Parker will go to her family's burial plot at Woodlawn Cemetery in the Bronx.

"I think she belongs in New York City," he says. "But, you know, until that time, I think she is just going to chill out and be in Baltimore."

That's where visitors can pay their respects and imagine the wisecracks Parker would have made about Baltimore versus the filing cabinet.