Accessibility links
Damon Lindelof Risks The Wrath Of Loyal Fans Again The Lost writer, who was a producer on the 2009 Star Trek reboot, is co-writer of the new Alien prequel Prometheus. He talks about science fiction, unsatisfied fan bases and how best to enjoy Prometheus. 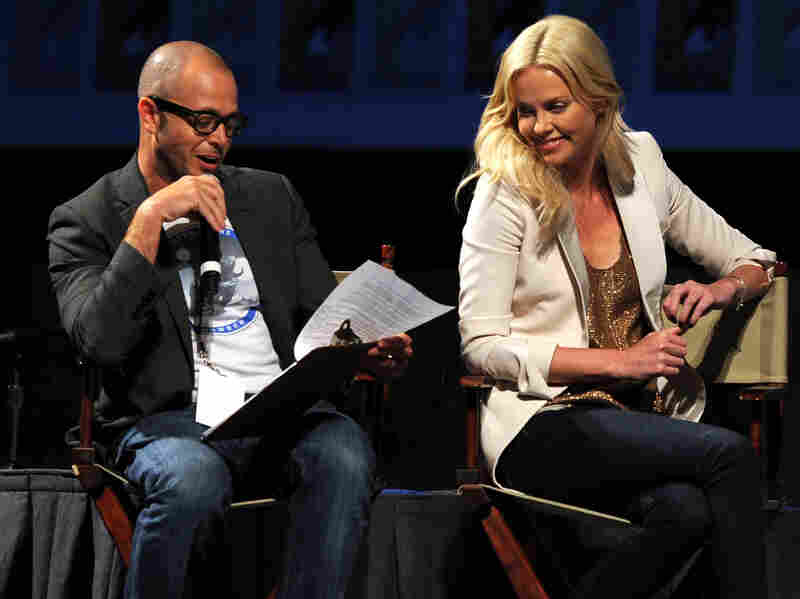 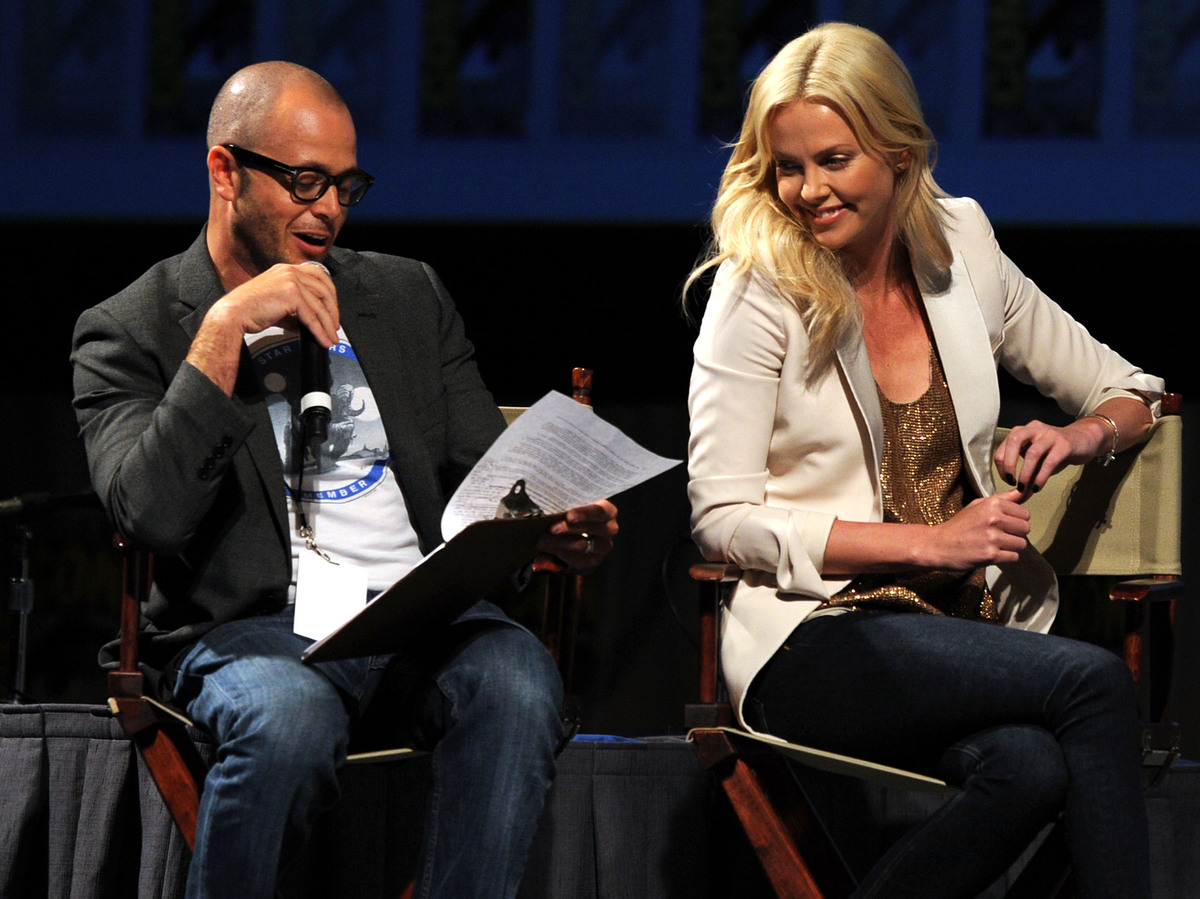 Damon Lindelof moderated a conversation with Charlize Theron, who stars in the new Ridley Scott thriller Prometheus, at the 2011 Comic-Con. Lindelof co-wrote the film.

Damon Lindelof was a producer on the 2009 reboot of Star Trek, which seemed to win over loyal Trekkies. And this weekend Lindelof will earn the devotion — or wrath — of Alien fans. He helped write the screenplay for the new film Prometheus, an origin story for Ridley Scott's 1979 sci-fi classic.

Alien was essentially a haunted-house story set on a spaceship, with a young Sigourney Weaver and a now-iconic movie monster. But Lindelof is best known for writing and co-creating the cult TV show Lost. And the big difference between Prometheus and Alien is that the new movie, like Lost, isn't just about thrills. It's about life's big questions. Lindelof talked to NPR's Audie Cornish about a few of those.

From 'Prometheus' - 'A Quick Word'

From 'Prometheus' - 'We Must Leave Now'

'We Must Leave Now'

From 'Prometheus' - 'Anything and Everything'

"The thing about the original Alien and Blade Runner is [they're] grounded in this thematic reality of the times. Alien is really about this idea of, what if space exploration was primarily dominated by corporate interests? Blade Runner is interested in the idea of, what are the consequences of making intelligent life that looks like us? What happens when it starts thinking for itself?

"So the idea behind Prometheus was: If we as human beings in the future got a clue or an indication of our origins ... and then we had coordinates, we actually had directions to go and basically meet our makers, what kind of people would go there? What would they hope to achieve? And then, of course, what happens when we get there? Because science fiction is really just the cautionary tale writ large. The fundamental law of nature is to not know too much about yourself. So God forbid we fly too close to that flame — we are going to get burned."

"For some reason I am drawn to stories that completely and totally have an interpretive element to them. I'm just really captivated by that. I understand it's a double-edged sword. I understand that it's a path to frustration. And also when you ask huge questions, like 'What is the meaning of life?' or 'What happens when you die?' — both questions that Lost took on, as does Prometheus — it's sort of hubris for me as a writer to try to answer those questions definitively." 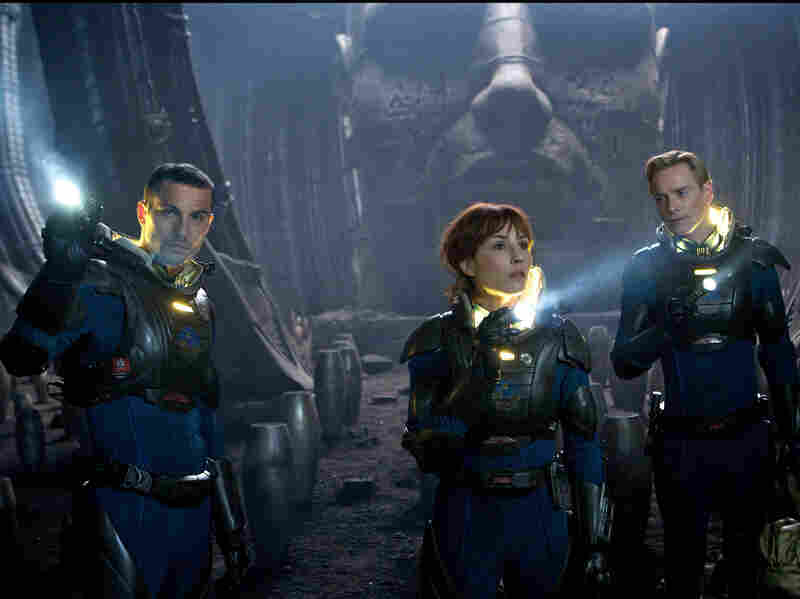 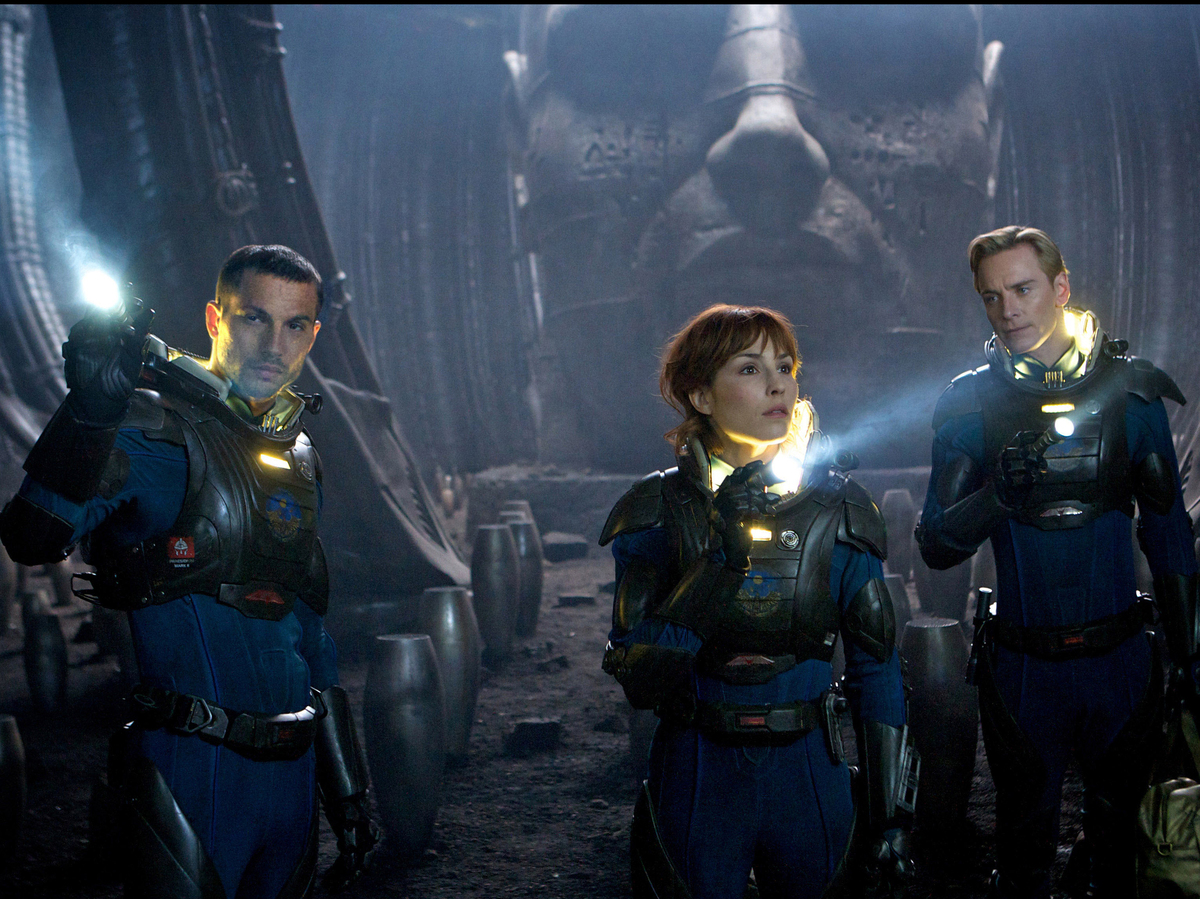 Logan Marshall-Green (left), Noomi Rapace and Michael Fassbender also star in the film, which opens in the U.S. June 8.

On the origin of his passion for writing

"When I was a kid there were these books called the Encyclopedia Brown Mysteries. Essentially it was a boy detective who worked out of his garage, and the boys in the neighborhood would come and say, 'Hey, my bike got stolen, my piggy bank got broken into, will you solve the case, Encyclopedia Brown?' It would be about a five- or six-page story, and there would be some sort of clue in there that gave away the answer. And then you would flip to the back of the book and see if you were right. I would read the story and immediately flip to the back of the book even if I hadn't guessed it, and my dad saw me doing this and he ripped out the answers on all my Encyclopedia Brown books. So I would go to him and I'd say, 'OK, I solved the case, I think that I know what it is now.' And he'd go, 'Oh I threw those away.' ... I guess I could've walked into any bookstore and just pulled another copy off the shelf, but that was less interesting to me than basically sitting with my own theory."

On the Lost ending

"I often wonder what I would've felt about the ending of Lost had I not been involved in its writing. I do think that a big part of this kind of storytelling, and one of the potential pitfalls, although I choose not to view it that way, is that your theory becomes so powerful in your own mind that anything that the storyteller serves up that is different than your theory is basically going to suck. And I am just as guilty of that in other filmmakers' storytelling than I would be potentially in Lost. I like to think that I would've loved the Lost ending because it's right up my alley, but I have fallen victim to lofty expectations."

Advice for fans of the Alien movies

"I guess my message would be: Try not to bring too much of what you want Prometheus to be into the theater. The first time you see the movie, your sense of what you want it to be and what it's going to be could potentially override you just sitting back and watching it. And I do feel that at the very least, taking full responsibility for my own role in the writing of the film, it's one of the most visually spectacular things that I've seen recently. It can be experienced as just something that washes over you if it's possible for you to turn your brain off. I just hope people dig it."