Accessibility links
Movie Review - 'Peace, Love And Misunderstanding' - Back To Woodstock, And To The Spirit Of The '60s Peace, Love & Misunderstanding stars Catherine Keener as a big-city lawyer who flees to her mother's (Jane Fonda) hippie commune when her husband asks for a divorce. Critic Andrew Lapin says Fonda shines, but the movie's paean to a bygone era feels lackluster and out of touch.

Back To Woodstock, And To The Spirit Of The '60s

Back To Woodstock, And To The Spirit Of The '60s 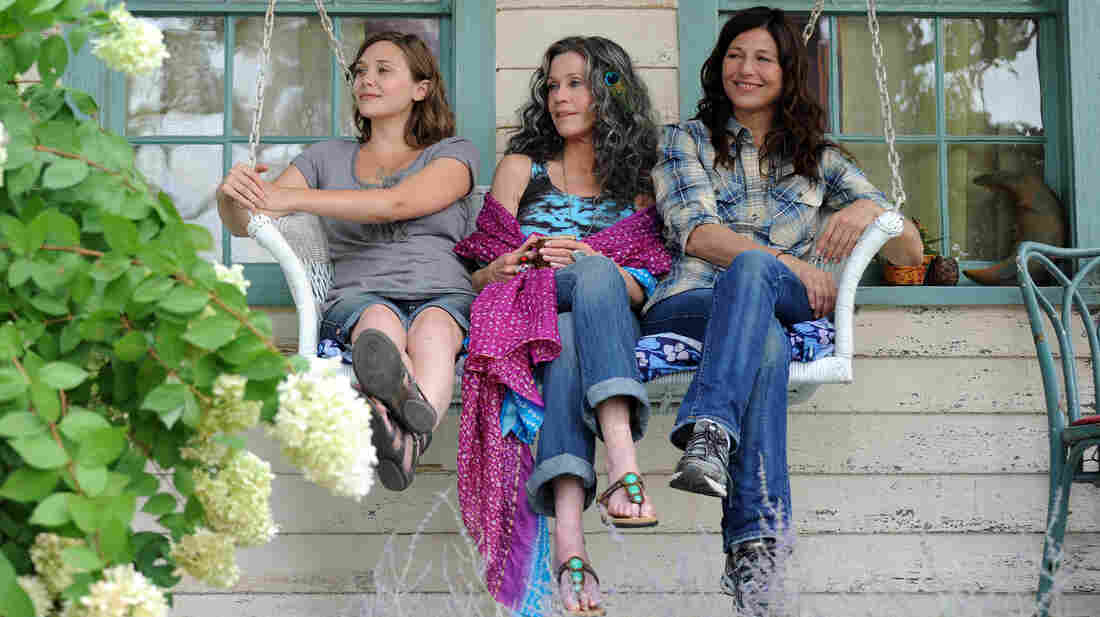 A big-city lawyer (Catherine Keener, right) must adjust to the hippie lifestyle when she and her daughter (Elizabeth Olsen, left) go to Woodstock to visit her mother (Jane Fonda) in Peace, Love & Misunderstanding. Jacob Hutchings/Strategic Motion Ventures LLC hide caption

Rated R for drug content and some sexual references

Several characters in Peace, Love & Misunderstanding, a bland comedy about generational disconnect, read and worship Walt Whitman's Leaves of Grass. And just as Whitman's paean to "thee old cause" celebrated "thou stern, remorseless, sweet idea," so too does the film push, much less sternly and sweetly, its own idea: that the spirit of the 1960s is alive and well and (still) living in Woodstock.

It's there, to a hippie commune in upstate New York's famous tie-dyed tourist town, that tightly wound city lawyer Diane (Catherine Keener) flees when her husband presents her with the considerably more bitter idea of divorce. Her mother, Grace (Jane Fonda), lives here, ready to teach Diane how to sing a by-the-numbers song of herself.

The film wants to be a love letter to the Jane Fonda generation, but really it's a love letter to Jane Fonda, who has found that post-retirement career sweet spot where every new movie she does is still considered an event. She inhabits her role with unreserved glee — this was, after all, the lifestyle that made her a household name. "No masculine energies allowed!" she crows during an all-female "Night of the Moon."

In Fonda's presence, the formulaic story at least has a noteworthy link to its own subject matter — which may explain why the film lets her off so easy. Her character is the patron saint of Woodstock, an all-loving and all-knowing guiding light who can, with a few forced exceptions, do no wrong. Director Bruce Beresford sets up a simple dynamic: Grace is a sage channeling some hippie higher power, and her family will sooner or later follow every word of her sound advice.

Somehow, all this confidence was lost on Grace's daughter, who must be the most timid lawyer in movie history. Only the opening, in which Diane's husband (Kyle MacLachlan) declares he doesn't want to argue with her anymore, even hints at her capacity to argue. 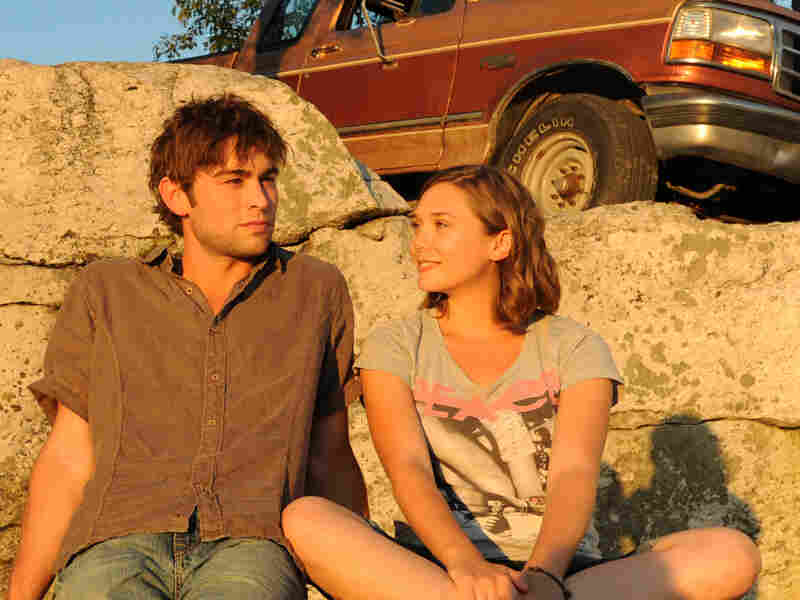 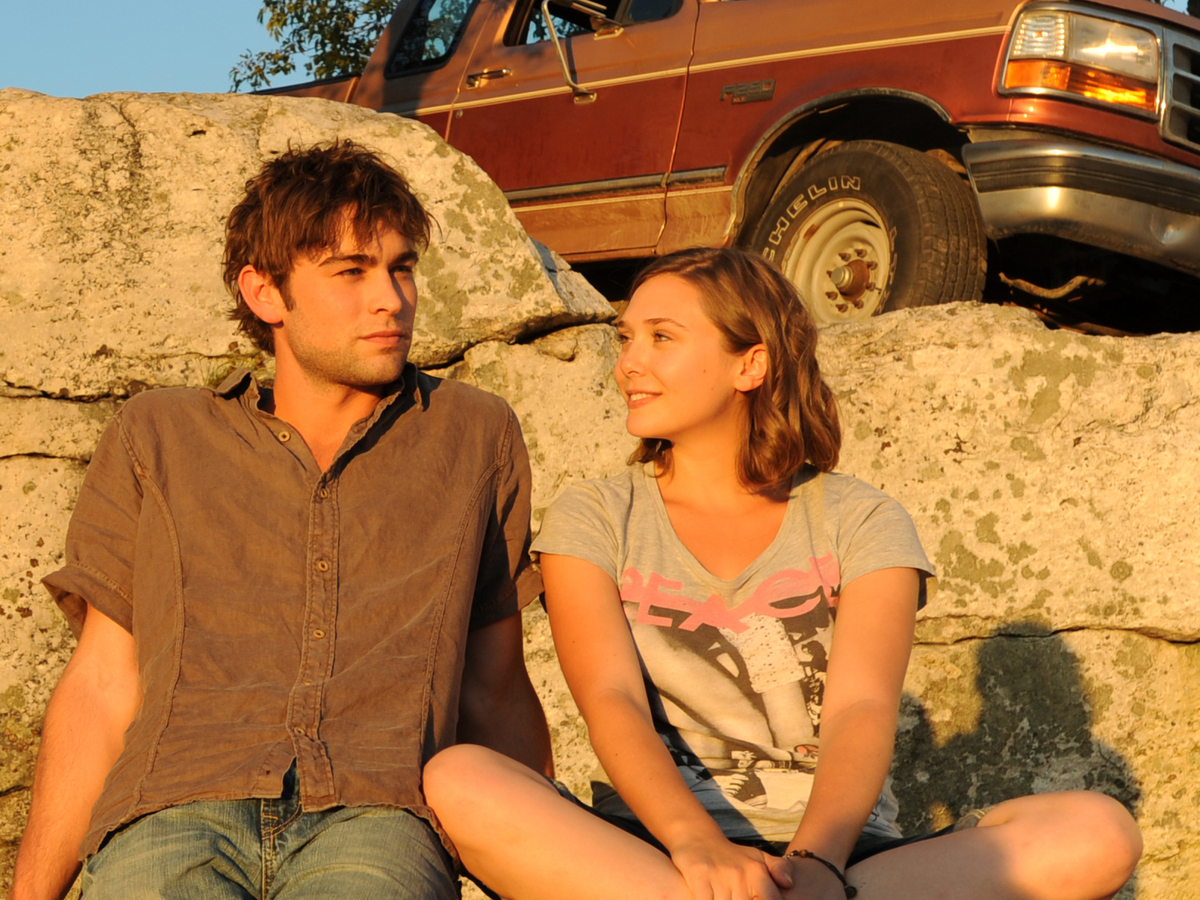 For the rest of the film she makes only the tiniest efforts to voice her thoughts, in every showdown barely getting 10 words out before acquiescing to her opponent. If Diane fights for her cases as halfheartedly as she fights with the residents of Woodstock, there's no way she's good enough to afford that luxurious New York City apartment she's left behind.

Diane is supposedly conservative, but this trait is sketched out in just a few throwaway lines, without much exploration into how those views developed as a backdrop to life in Woodstock. "It's pointless to debate foreign policy with a hippie," she musters at one point — not exactly drawing a line in the sand.

Keener is too gifted an actress for such an underwritten part. But she still charms as she limns a character gingerly tiptoeing back into her past — through, for example, a breezy performance of "The Weight."

So, too, do Elizabeth Olsen and former Nickelodeon star Nat Wolff (The Naked Brothers Band) shine as Diane's hormonal teenaged children, each caught up in a romantic entanglement and eager to discover all the secrets of love their grandma has to offer.

There's some beautiful cinematography on display, and the town of Woodstock feels fully realized in a way that goes beyond just the music. (The local butcher laments the effect GMO crops have had on his parents' farm.) Yet Peace, Love & Misunderstanding mostly comes across as chintzy and uninspired as its title. Diane even purges herself by jumping into a lake, the method favored by four out of five filmic life coaches.

Even the film's approach to explaining the '60s is stagnant and surface-level, a sort of "Hippies For Dummies." Co-writers Joseph Muszynski and Christina Mengert trade in easy jokes about fashion, mystical visions and hydroponics, rarely aiming for anything deeper. Peace, Love & Misunderstanding was filmed before the Occupy protests, so the movie's disconnect from the counterculture zeitgeist isn't entirely its fault. But that leaves us with the question of why we should bother with an effort that feels so limp. Woodstock wasn't done halfway, after all.

So where's the sense of danger in today's depiction of flower power, the slightly smelly waft of the anti-establishment and the anti-shower? Perhaps it's dying out alongside the generation — and the stern, remorseless, sweet idea — that the movie loves so dearly.