Accessibility links
Generation Rent: The Slamming Door Of Homeownership The economic hammer has fallen especially hard on young adults, many of whom might never be able to buy a home. In a nation where homeownership marks the American dream, a generation of renters could alter communities and redefine the idea of middle-class success. 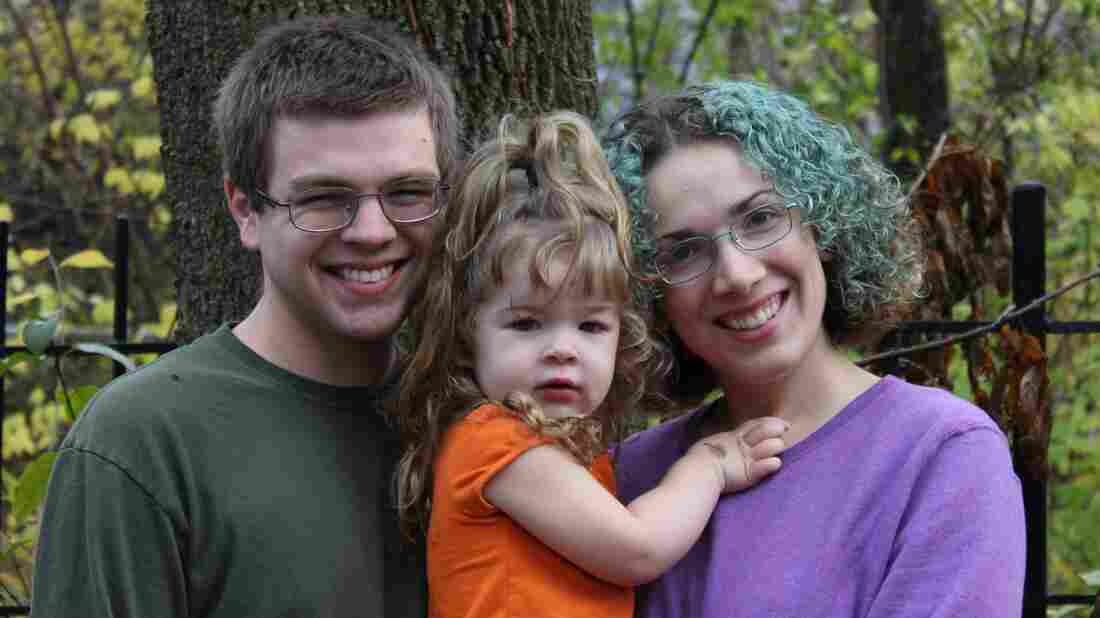 Neal Coleman and his wife, Rachel, are both in their mid-20s and attend graduate school at Indiana University in Bloomington, Ind. They say renting makes more sense for them and their young daughter until their family is a bit more settled. Courtesy of Neal Coleman hide caption

Kristi Taylor can pinpoint the precise moment she let go of the dream of homeownership. It was a few months ago, as she and her husband and infant son were driving through a neighborhood of homes near their apartment in Athens, Ga.

"As we were passing through, I realized that I don't really look at houses like I used to, when we would point out homes and say, 'That can be ours someday,' " says Taylor, who is 28. Now, she says, "the idea of homeownership is so vague, it doesn't even strike me as something that's in our future."

Taylor says she and her husband, Zach, 25, have lived in nine different places in the past five years, including stints back home with the parents — both his and hers — as they moved from place to place "chasing after jobs."

A Home Of Their Own

Homeownership among younger adults has shown a steady decline since the mid-2000s, according to the latest available Census data.

The Taylors aren't alone. The economic hammer has fallen especially hard on 20somethings — part of the so-called Millennial Generation or Gen Y born roughly between 1975 and 1995. Plagued by high unemployment, many have had to delay careers, marriage and having children. And the idea of owning a home is more often being put off or written off entirely.

In a nation where homeownership is part of the American dream, a generation of renters could alter communities where they live and redefine the idea of middle-class success.

'A Recipe For Frustration'

Sociologist Katherine Newman, who chronicles some of the struggles in her book The Accordion Family: Boomerang Kids, Anxious Parents, and the Private Toll of Global Competition, agrees with Conway that we may be witnessing the creation of a generation of renters.

"I'm hoping that the Millennial Generation doesn't set its sights on homeownership as a benchmark of economic stability, because it's going to be out of reach for so many of them that it will just be a recipe for frustration," she says.

Homeownership among millennials has been on a gradual but steady decline, according to the latest available U.S. Census Bureau data. 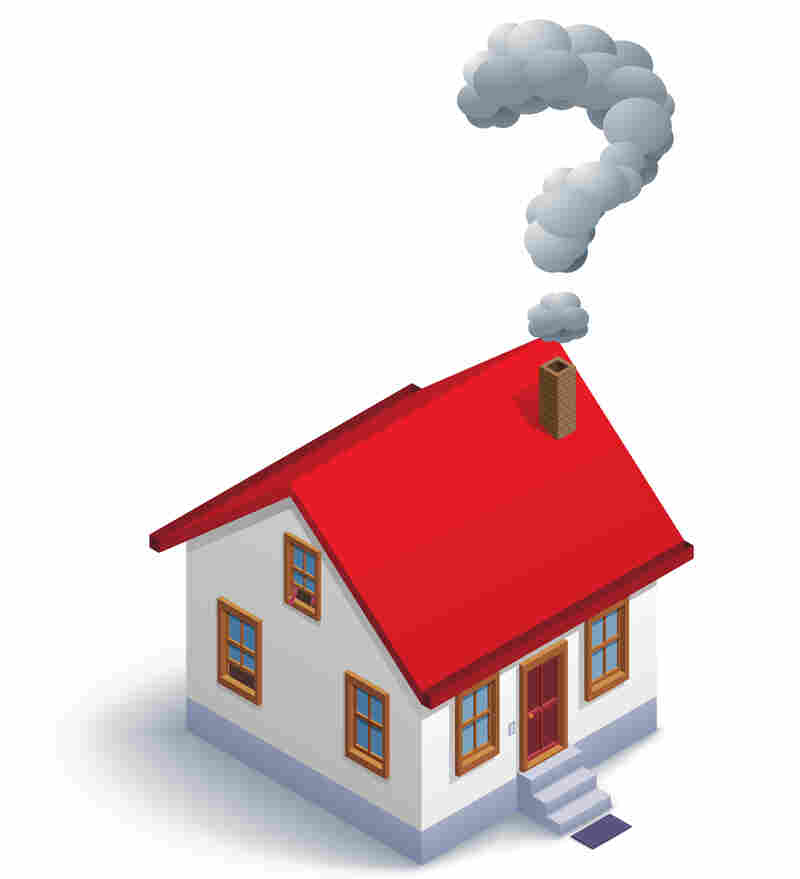 Does Generation Y see homeownership as the same symbol of middle-class success that was so powerful for their parents and grandparents? Click here to find out. iStockphoto.com hide caption

Even with big drops in housing prices and interest rates, getting a mortgage has become a lot harder since the heady days of "no income, no assets" loans that fueled the housing boom of the early 2000s. Most lenders now require a rock-steady source of income and a substantial down payment before they will even look at potential borrowers. And many millennials won't be able to reach that steep threshold.

The vast majority of Americans who currently rent say they hope to buy a place of their own someday, according to a recent survey released by the Woodrow Wilson International Center. But Newman fears that for many young adults, at least, perception and reality have yet to come face-to-face.

"The capacity to own a home will be powerfully affected by the slowdown in [their] earnings," she says, "especially for entry-level workers and the crushing consequences of student loan debt."

Rolf Pendall, a housing expert at the Urban Institute think tank, says too much emphasis has been placed on homeownership in the past few decades, not only by individuals, but by governments and policymakers. So a shift in attitudes might be a good thing.

In the short run, he says, local officials need to prepare for more renters.

The availability — or lack thereof — of quality rental housing will put communities in competition with one another as a more mobile workforce is able to vote with its feet, says Conway of Generation Opportunity.

"A question for local government leaders," he says, "is that if you have a generation that is less committed to taking a risk and buying property in that area, either because there are not jobs or because the overall national situation looks rocky, then as a local official, you absolutely have a problem for your long-term commitments, your long-term budget, your long-term obligations to such things as pension funds."

Pendall thinks many or most current renters will eventually become homeowners, even if it takes them longer to make that transition than it did for their parents. 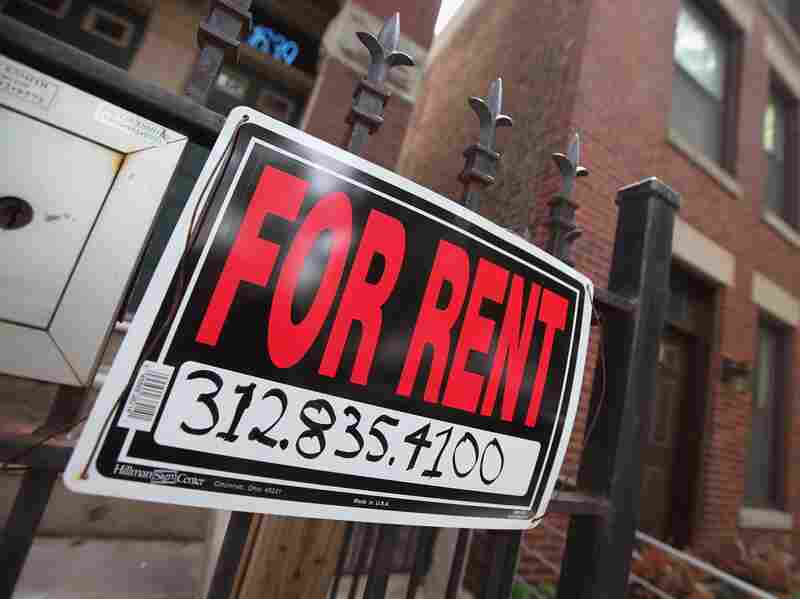 Homeownership will be out of reach for many younger adults in the U.S., according to several sociologists and housing analysts, leading to a rise in the number of renters. Scott Olson/Getty Images hide caption

In theory, fewer homeowners will mean municipalities will rake in less revenue from property taxes. But Pendall believes local governments will simply adjust to make rental properties "a larger share of the tax pie."

And within those communities, some businesses will feel the pinch. Dan Ariely, a professor of psychology and behavioral economics at Duke University, says a wave of renters would have an obvious impact on the massive consumer industry that supports homeownership.

"My subjective experience is that when people buy a house, they immediately start renovating and fixing it — going on Sunday afternoon to Home Depot, doing things that I think people would never do for houses that they rent," he says.

But Ariely also sees a potential economic upside to a rise in renters: less of what economists call "housing lock," when homeowners can't move to take a new job because they're saddled with houses they can't sell.

"If we all lived in a place where we rented more freely, moving from place to place would be easier," Ariely says.

Jason Dorsey, 33, who consults and writes about Generation Y, says when you're talking about his generation, everything is taking a back seat to the limp economy.

Pushing things back — that describes Neal Coleman and his wife, Rachel, both Indiana University graduate students in their mid-20s. For them, homeownership just doesn't make sense until careers, kids and finances are sorted out.

"Renting is more flexible, and we're not sure where we are going to be in a few years," Coleman says. "We were also concerned about long-term financial liabilities. Grad school is transient, so we didn't want to be tied down to a house in Bloomington, Ind., if we're moving to Boston or the West Coast."

"You're freer when you own your own home, your own land. You're not beholden to a renter's contract, or lease," Coleman says. "My feeling is that homeownership is an investment in being able to control your surroundings, to build a life for you and your family."