Accessibility links
Will Economy Push Washington To Make A Deal? President Obama is under pressure because of a slowdown in job growth. The Republicans say they're determined to prevent the Bush-era tax cuts from expiring in December. That could bring both sides back to the bargaining table. 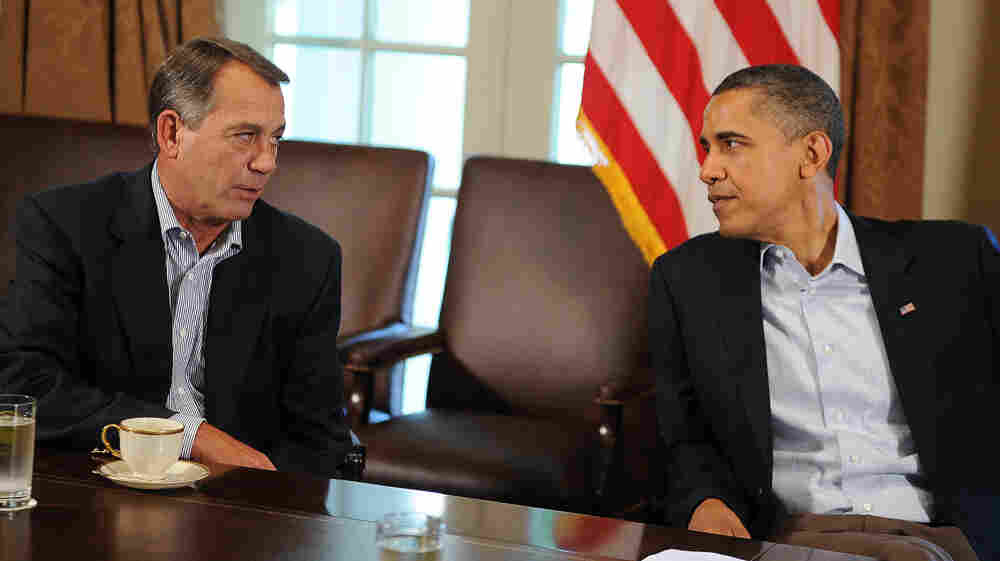 President Obama speaks with House Speaker John Boehner during a meeting at the White House in 2011. A slowdown in job growth and a looming tax deadline could force the president to try to revive his "grand bargain" with Republicans. Jewel Samad/AFP/Getty Images hide caption 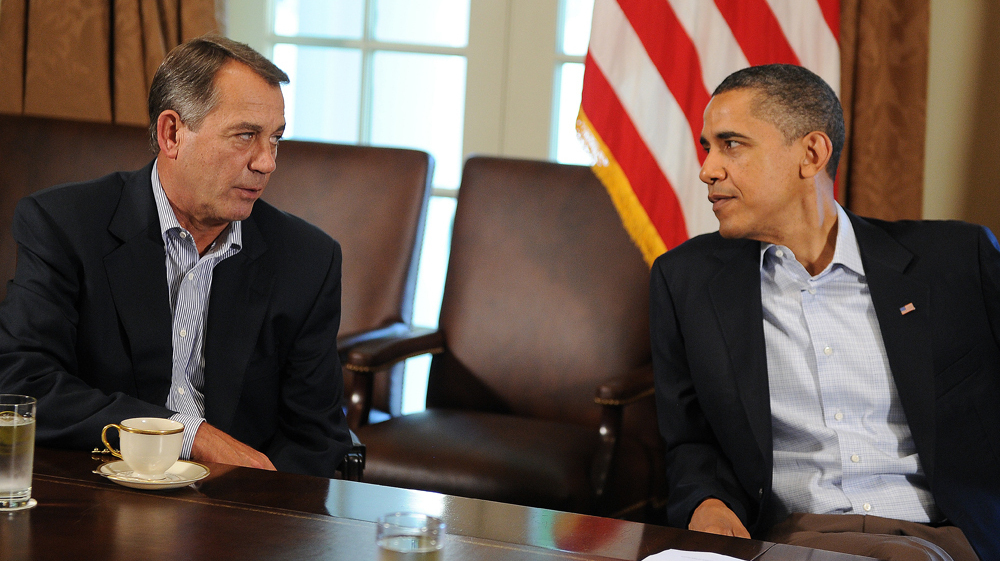 President Obama speaks with House Speaker John Boehner during a meeting at the White House in 2011. A slowdown in job growth and a looming tax deadline could force the president to try to revive his "grand bargain" with Republicans.

The Obama administration is searching for a "sweet spot" in economic policy: measures that could increase job growth right now without worsening the federal deficit. That task gained new urgency this month when the Labor Department reported a sharp slowdown in job growth in May.

The challenge could force the president to try to revive his "grand bargain" with Republicans.

For the first couple of months this year, the sun shone on the U.S. job market, which seemed to be recovering without much help from Washington. Storm clouds began to gather in the past three months, though. Former White House economic adviser Larry Summers says the outlook now is a lot less rosy.

"It was reasonable to hope several months ago that the economy was finally going to reach escape velocity," Summers says. "I don't think one can continue to have those judgments today."

The one silver lining, Summers says, is the remarkably low interest rates at which the U.S. government can still borrow money. That creates an opportunity for the government to give the economy a temporary lift — by spending money on public works projects and other investments that will only cost more down the road.

"You're going to have to restore Kennedy Airport sometime. Why not do it now when construction unemployment is so high and interest rates are so low?" he says.

An End To 'Stimulus In Isolation'?

The jobs bill President Obama proposed to Congress last year did include modest investments in public works, as well as money to help local governments keep teachers on the payroll.

Alan Krueger, who chairs the president's Council of Economic Advisers, says that if Congress had approved those measures, the May jobs report might not have been so gloomy.

"We lost 28,000 construction jobs, 8,000 education jobs. Had the president's proposal passed, which he reiterated and included in his budget, we would be in a better situation for workers in those two sectors," Krueger says.

With unemployment climbing to 8.2 percent last month, some economists now see a need for more aggressive federal action. But the president is constrained by anti-spending Republicans in Congress and a ballooning federal deficit.

Fiscal watchdog Maya MacGuineas, who heads the Committee for a Responsible Federal Budget, sees no chance for a big new round of spending — one that would simply add to the government's red ink.

But MacGuineas says the story might be different if the short-term stimulus were part of a larger package that also included long-term deficit reduction.

From 'Inconceivable To Inevitable'?

There's already pressure in Washington to make such a deal to avoid the so-called fiscal cliff at the end of this year. That's when all of the Bush-era tax cuts are set to expire, and when automatic spending cuts are set to go into effect. The combination would be a major shock to the fragile economy.

"The only real option to avoid these bad scenarios is if we come together and compromise on replacing the fiscal cliff on some kind of comprehensive debt deal that's phased in more gradually and is more consistent with economic growth," MacGuineas says.

Republicans — and some Democrats — say they're determined to prevent the tax cuts from expiring in December, though the Congressional Budget Office warned this week that further extensions will mean even wider deficits.

"The American people have had it with big government and high taxes and a regulatory system that knows no bounds," he says. "And they want elected officials to take control of the situation so that American job creators can go back to doing what they do best: creating jobs."

Congressional Republicans and the president seem no closer to a "grand bargain" now than they were when talks fell apart last summer. But Summers hasn't given up hope for an economic shot in the arm.

"If you certainly look at the vexed climate, it's easy to be pessimistic," he says. "On the other hand, I've observed over time that in the face of events, particularly in the face of difficult events, the transition from inconceivable to inevitable can sometimes be relatively rapid."

The looming tax deadline will put pressure on Republicans, while another month of sluggish job growth would do the same for Obama.