Accessibility links
Hello Again, My Gooey Friends: On Loving 'Alien' And Seeing 'Prometheus' Chris Klimek loves Alien. He loves Aliens. Alien vs. Predator? Not so much. But he came eagerly to see Ridley Scott's new film, Prometheus, set in the Alien universe. Was it enough to satisfy a fan's needy heart? 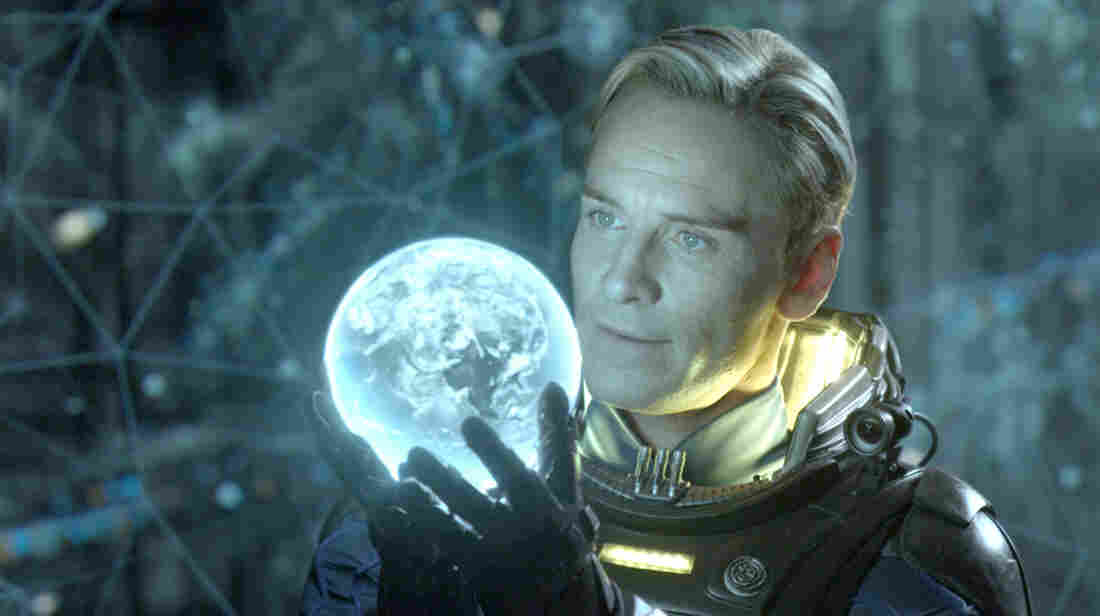 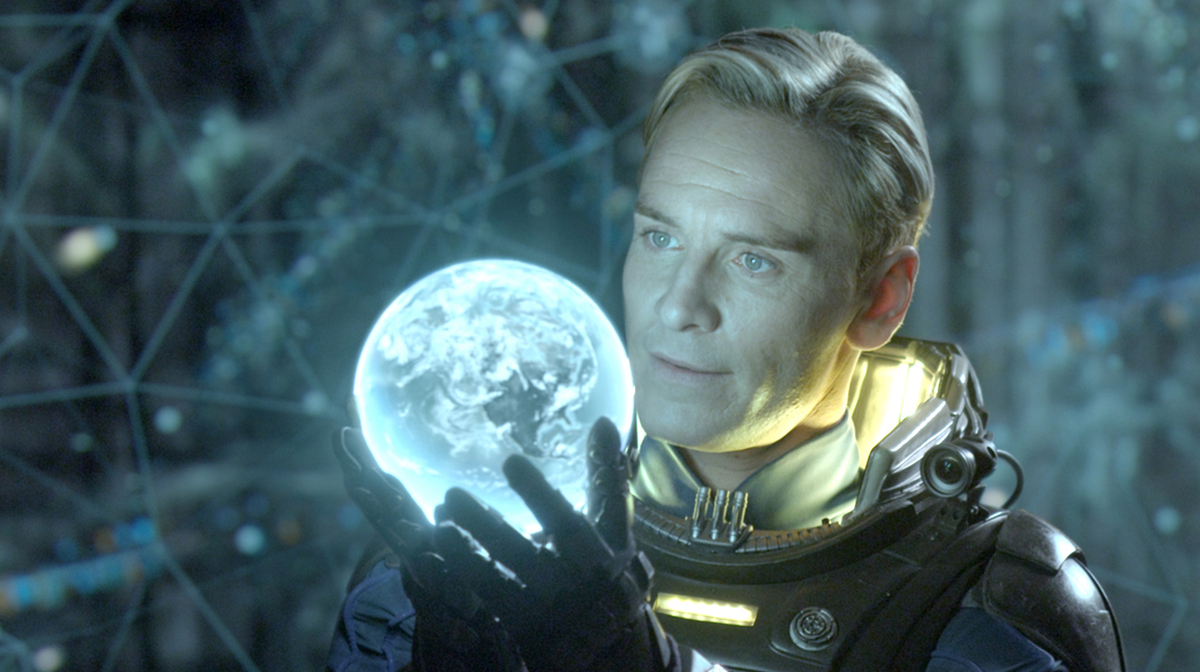 Strap in, pioneers! The FTL drive is spun up, the moorings cleared, the life-support system supportive. We are go for launch to a remote, mysterious, possibly hostile landscape in search of our — okay, my — origins.

That was the year Aliens, James Cameron's pass-the-ammo sequel to Ridley Scott's 1979 sci-fi/horror landmark Alien, came out. I was a couple weeks shy of 10, too young to persuade my folks to take me to an intense, R-rated monster movie, but I was helpless against its ad campaign. I remember thinking that the actress on the poster with the futuristic-sounding name — Sigourney — looked like Michael Jackson. Kids!

I procured Aliens, The Official Movie Magazine (lavishly illustrated!) and then the authorized paperback novelization by Alan Dean Foster, which I pored over with the sober devotion of a Talmudic scholar. I finally saw the movie at a neighbor's house when it came out on VHS. It was my first experience watching actors speak words I recognized from having read them first, a taste of my future as a theater critic. I can even remember a few line readings where I thought, "No, you're doing it wrong!" Come to think of it, maybe I should've been a director.

Except I'd have been a terrible director, because obviously, everyone connected with Aliens did everything right. Though Sir Ridley himself seems to think little of it, the sequel is widely admired and referenced in its own right, equal to albeit different from Alien, which was the first tape I rented after my dad at last broke down and bought a VCR a few months (months! That's practically forever!) later.

I was fascinated by how forbidding and adult these films seemed. They felt infinitely more cynical — to my pubescent mind, "realistic" — than the Star Wars and Star Trek films that had consumed my attention a couple of years before. It was like hearing a Ramones record after years of listening to The Monkees. When Salon's Matt Zoller Seitz compiled his ten "Movies That Really Understand Work" a few years ago, he put Alien at No. 1. Its characters' utterly logical lack of awareness that they were living in The Future, coupled with H.R. Giger's creepy, heavily sexualized creature and environmental designs (and, obviously, the fact that its emergent hero was a woman, 20 years before Buffy), assured the film a long afterlife.

So I can hardly overstate the anticipation I felt last week walking into Prometheus, which opens today.

It's been well over a year since its makers first planted, then batted their eyelashes and skirted, the question of whether or how much this big-budget 3-D epic is connected to Alien. The first trailer gave away months ago that the picture is at least set in the same grim future Alien was, wherein interstellar truck drivers are terrorized by parasites with acid for blood — and that's just the Weyland-Yutani Corporation's board of directors. In space no one can hear you scream, and no one would lift a finger to help you if they could.

So far, so great. I've longed for years for someone to go back to this world and make another watchable film, by which of course I mean an endlessly rewatchable one. The territory remains fertile, pun intended, thanks to how much Scott's original movie left unexplained — everything, basically. Nevertheless, the sequels have grown progressively dumber and less imaginative, even when coming from filmmakers who were or would be brilliant elsewhere.

This one, however, is from Ridley Scott. In the 30 years since he walked away from sci-fi after Blade Runner, which remains in all its various iterations as sacred a geek text as Alien is, he's been prolific but usually disappointing. (Gladiator for Best Picture? Seriously? I am not entertained.) His return to the genre that's served him best was a reason to hope, as was the news that Lost co-showrunner Damon Lindelof was working on the script, and then came the casting of Noomi Rapace and Michael Fassbender, and OMG they're even withholding the word "alien" from the title. That last part, especially, felt like a commitment to wipe the helmet-visor clean of the gooey residue of decades of lame follow-ups. Then there was that brilliantly inventive marketing campaign: Fake TED Talks, commercials for replicants. If the stakes were any higher, they'd be...

For those of you who prefer to fill your brains with useful or lucrative or age-appropriate information: Midichlorians, as we learned in Star Wars En Dash Episode One Colon The Phantom Menace En Dash Colon En Dash, are the killers of dreams. Specifically, they're the microorganisms that, if concentrated in the bloodstream, create the ability to feel or even manipulate The Force.

They were the answer to a question that even those of us prone to thinking about such things hadn't asked.

During the years between Star Wars in 1977 and this dispiriting footnote from George Lucas in 1999, the Zen platitudes espoused by Obi-Wan Kenobi and Master Yoda had let us imagine mastery of The Force to be the kind of thing a would-be Jedi Knights could pick up through meditation and study, through discipline, through ascetic worthiness. Nope! Turns out it's like perfect pitch or the ability to do long division in your head: you're either born with it or you're not. And if not? Off to law school with you!

It was this particular history that I brought to Prometheus when I saw it last week. And I enjoyed it, for the most part. I think.

Scott, to his credit, is not a sentimental filmmaker. He's adamant that Prometheus is its own thing. He said in a BBC interview this week that it would take two more films to carry the story forward to where Alien picks up a generation later. And this new movie feels appealingly different from that old one, encompassing some of the heady grandeur of 2001. We're dealing with eager explorers this time; they're scientists, not miners or soldiers forced reluctantly into the role. Be assured, though: it still honors its mandate to make us jump out of our seats. Visually, it's as sumptuous as The Hunger Games — the other eagerly awaited sci-fi film of the year — was shoddy-looking. Michael Fassbender's eerie performance as David, a replicant who, delightfully, feels a kinship with Peter O'Toole's character in Lawrence of Arabia, should instantly propel him into the Android Hall of Fame. And that's not a backhanded compliment.

It isn't enough. What mere movie could be, now that I have a boss and a mortgage and ex-girlfriends, and people tell me I'm too old to wear shorts even when I'm sweating through my shirt?

Even if it could, this one has actual movie problems, like characters who are by turns dumber and then suddenly smarter than they should be, drawing specious conclusions with an ironclad certainty because it's almost time for the movie to end. The movie feels burdened by a wrongheaded impulse to explain the aliens, even though they don't need explaining any more than The Force did, and here again the effort feels depressingly prosaic. The creature stuff not designed by H.R. Giger back in the 70s looks ersatz; the same old tentacles and orifices we always get. And there's an awful, wretchedly on-the-nose scene that recalls the voice-over narration Scott was forced to add to Blade Runner to "clarify" the film. (He deleted it from subsequent rereleases). Only it's worse than that. This scene, and you'll know which one I mean the second you see it, comes late enough to give the film a sour aftertaste of They Think We're All Dumb.

The editor of this blog, who watched the movie with me, suggested that the scene might've been added as a concession to audience members who only know the Alien series from its latter-day "versus Predator" leavings. It stands to reason such beings could exist. I think of them the way I think of the poor, doomed crew of the freighter Nostromo even before they entered the toxic atmosphere of LV-426 to investigate a mysterious transmission, 30 years after Prometheus, 33 years ago.