Accessibility links
The Young And The Jobless: Hopes On Hold In Spain For a stark example of the depth of the European economic crisis, consider the job prospects of young Spaniards. Nearly 50 percent are out of work, making it extremely difficult for many to move out of their parents' home, start a career or get married. 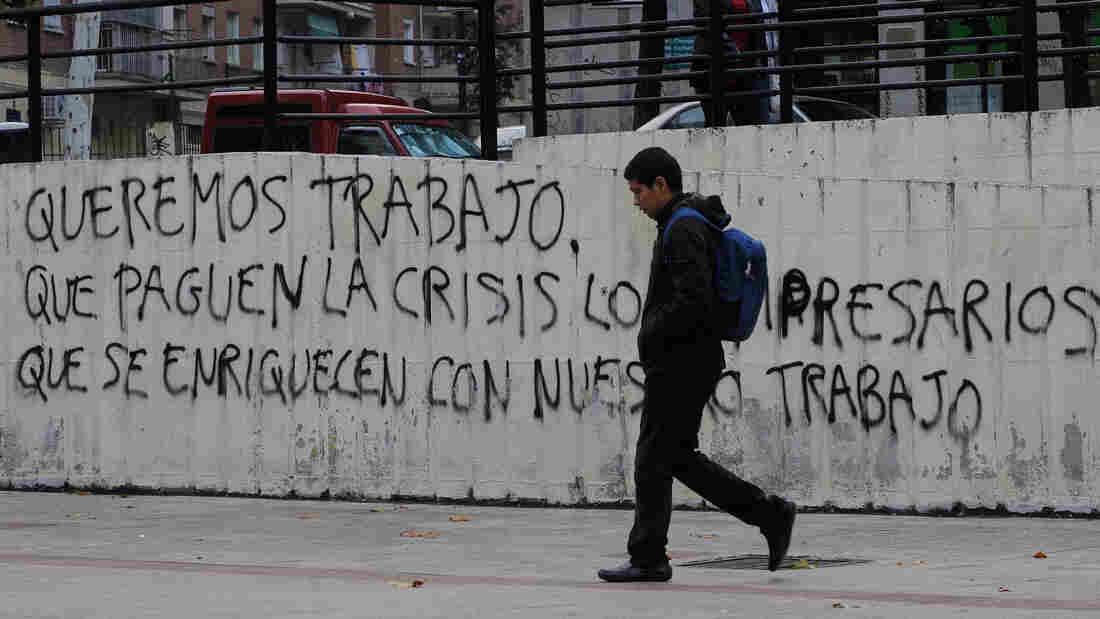 Graffiti on a wall in Madrid reads, "We want to work, let the businessmen who have gotten rich from our labor pay for the crisis." Nearly 50 percent of young adults in Spain are unemployed. Denis Doyle/Getty Images hide caption 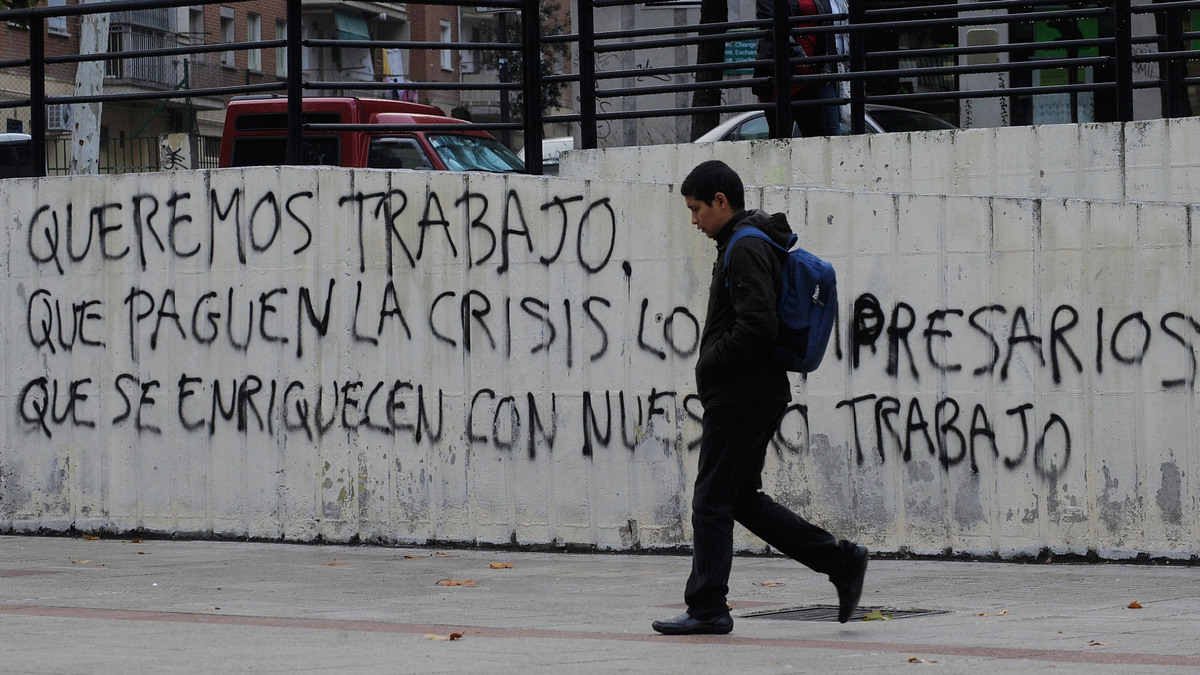 Graffiti on a wall in Madrid reads, "We want to work, let the businessmen who have gotten rich from our labor pay for the crisis." Nearly 50 percent of young adults in Spain are unemployed.

The crowd of job seekers at an unemployment office in downtown Madrid looks different than it did a few years ago.

When the housing market went bust, construction workers flooded the lobby. Now, labor reforms have made it easier for corporations to fire workers without seniority. So now young people, including those with an education, are unable to find work.

Jaime Garcia de Sola, a former intern at an investment bank, was one of those waiting in the unemployment line.

"Actually, everything was OK, but there was not too many things going on, so finally they had to fire someone. I was like the new one, so it was me," he says.

Spain has Europe's highest unemployment rate — about 25 percent — and for young Spaniards, it's near 50 percent. Every weekday morning, lines snake around the block at unemployment offices across Spain, where job seekers go to register for benefits or training courses. 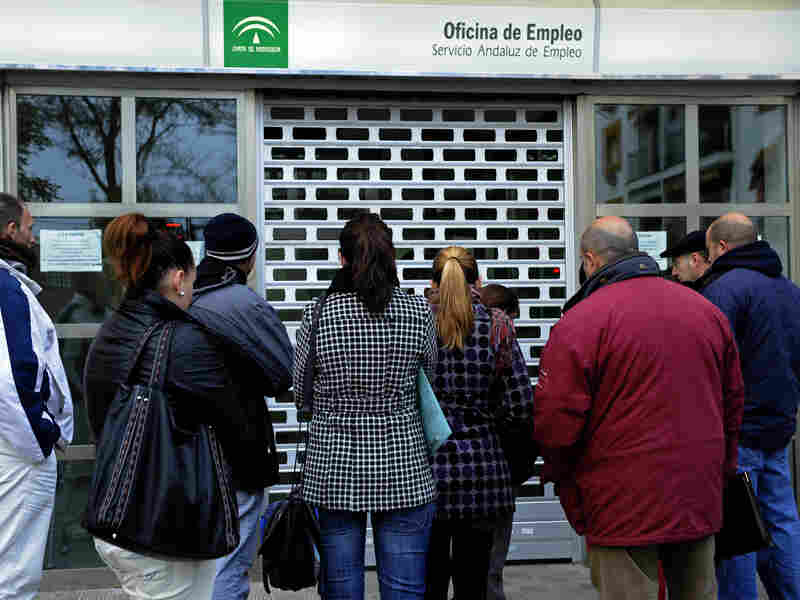 People wait in line in front of a government employment office in the Cruz Roja suburb of Sevilla. Cristina Quicler/AFP/Getty Images hide caption 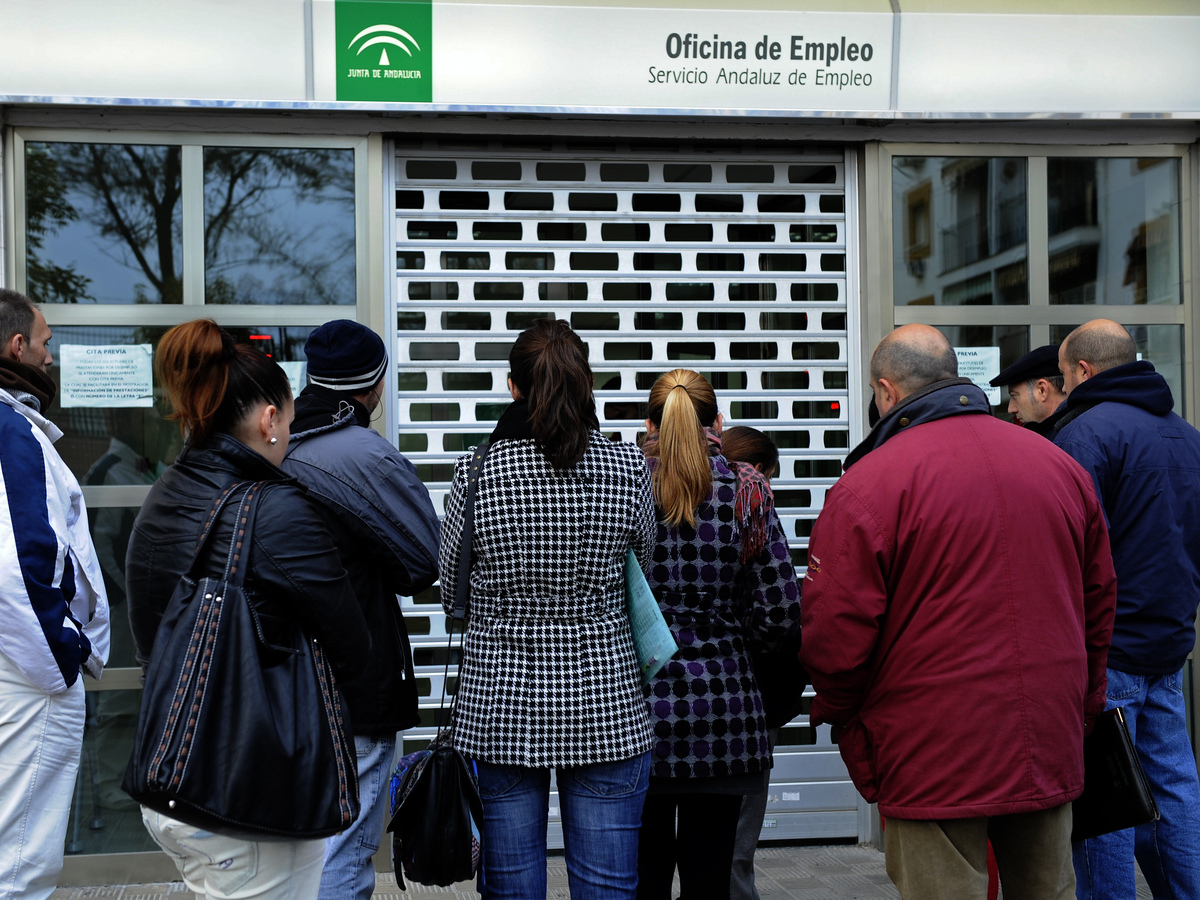 People wait in line in front of a government employment office in the Cruz Roja suburb of Sevilla.

At 30, Garcia was looking forward to moving out of his parents' house.

"I was about to, and then I got fired. I had found like the perfect apartment, with some friends and everything, and then ... I guess I'm lucky that I didn't get into the contract and stuff, because that would be hard today to pay," Garcia says.

A Tough Way To Start A Marriage

Unemployment came at a particularly inconvenient time for the person just behind Garcia in line.

"I'm going to get married on the 16th of June. It's going to be quite hard being without work after the wedding," says Vicky Fernandez, 30, who racked up advanced degrees in hopes she wouldn't find herself in this line.

Many job hopefuls in the line are well-educated 30-somethings — the demographic Spain's economy relies on to do things like buy houses or start families. But those plans get put on hold during sour economic times.

"I'm quite frightened because also I want to be a mother. So it's quite difficult right now because you don't have enough money to get your life to the end of the month. So you can imagine it with the children," Fernandez says.

Financial autonomy may seem beyond reach for young adults in Spain. They tend to live with their parents longer than in the U.S. — with or without an economic crisis. It's one of the traditions that allows the country to survive with high unemployment among youth.

"They stay with their parents. If one of the parents works, then they will be able to survive, and therefore the impact of unemployment is not as strong as it would be in another society," says Gonzalo Garland, an economist at Madrid's IE Business School.

"Sometimes it's even grandparents with their pensions who are supporting other families where none have employment," he adds. "So there's this family network, let's say, that also tends to alleviate to some extent the impact of very high unemployment."

The problem lies when those well-educated 20-somethings become 30- and 40-somethings and can't find steady, meaningful work. Garland says that paradoxically, Spanish laws that aim to protect jobs are at least partly to blame.

"Because firing is so difficult and the cost is so high, there's also a resistance to hire," Garland says. "Therefore what happens is you have a lot more long-term unemployed in Western Europe, than what you have in the U.S."

Back at the unemployment office, Garcia watches construction workers digging up the road out front and wonders whether going to college and getting internships was the right path after all.

He's thinking of going abroad now, despite reservations of what may come.