Accessibility links
Growling With The Gorillas: A Rwanda Mountain Trek Gorillas often get a bad rap, but folks who work with them say they're as much gentle as giant. On a recent trip to scope out the primates, an NPR producer trekked into the Virunga mountains of East Africa, where more than half of the world's mountain gorillas live. 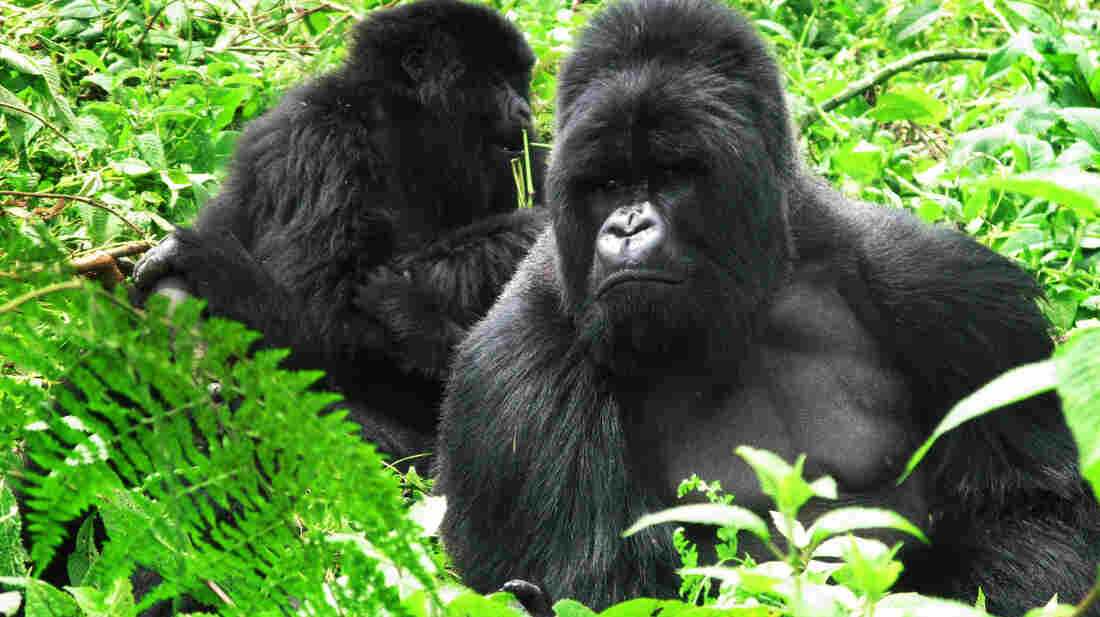 Gorillas rest in the Virunga mountains of Rwanda. More than half of the world's mountain gorillas live in the volcanic chain in East Africa. Rebecca Davis/NPR hide caption

It's not easy shaking a bad reputation. Take the gorilla, for example: It's been saddled with a sketchy rep for as long as anyone can remember. Something along the lines of big, hairy, ferocious and superhuman in strength. A bit daunting, perhaps. And yet folks who work with and study gorillas say they are as much gentle as giant. I recently had the opportunity to find out for myself thanks to a trip organized by the International Reporting Project that took us to Rwanda.

More than half of the world's mountain gorillas live in the Virunga mountains of East Africa, a volcanic chain that straddles Uganda, the Democratic Republic of the Congo and Rwanda. For years, a chunk of the Virungas has been protected from poachers and farmers, so unlike much of the land in this area that's been cleared for crops, the Virungas are still covered by lush rain forests.

On the Rwanda side, the protected zone is called Volcanoes National Park. It's where I went to hook up with a guide and a small group of visitors for a trek into gorilla territory. Once a day, these guides are allowed to take a few people into the forest to see the gorillas. The day I went, we were told we'd be searching for a group called Hirwa, which means Lucky One. It was a special opportunity because the Hirwa group has a very rare quality among mountain gorillas — a set of twins.

We started out before sunrise one Sunday morning, and though we were prepared for rain, the skies were clear and a soft mist hovered over the peaks of the volcanoes that encircled us. As we started into the forest, our guide, Eugene Twahilga, called us over and issued a few warnings: It's OK to take pictures, but no flash; speak quietly; and if you become frightened, do not run away. 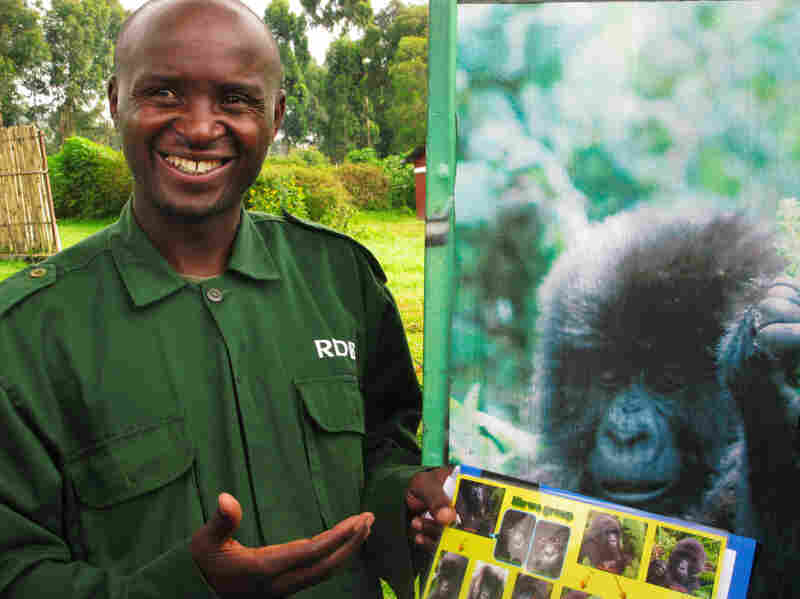 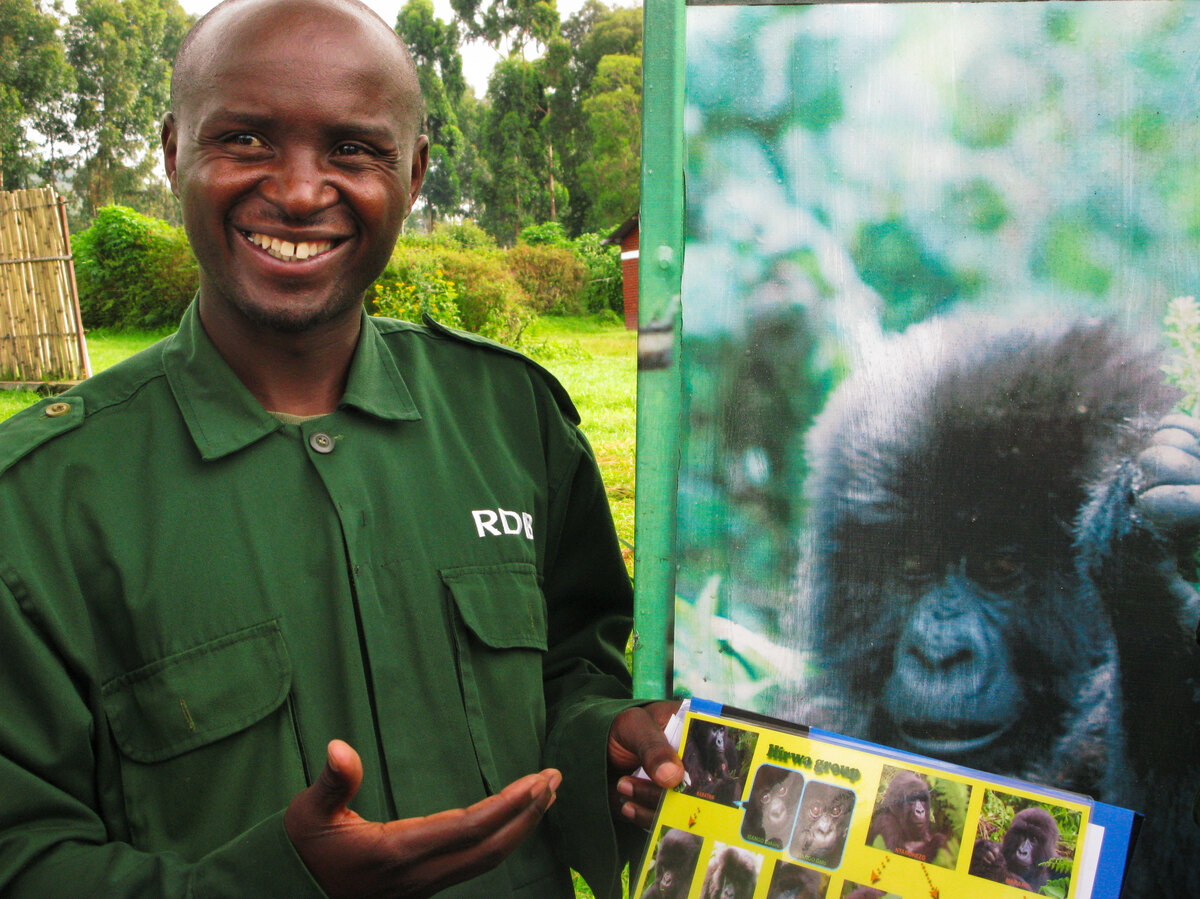 Guide Eugene Twahilga leads treks into Volcanoes National Park in search of gorillas. Before approaching them, he growls quietly to avoid scaring them.

As Eugene told us with a big smile on his face, "The gorillas might think they should chase you."

Mountain gorillas are still on the endangered species list. There are other kinds of gorillas in the world, but there are only about 800 of this particular subspecies, with 480 of them living in the Virungas. According to a 2010 census, the population here has grown by 25 percent in the past decade, which is good news.

But they still face some serious challenges. Gorilla vets will tell you that top on that list is disease, and in particular diseases spread to the gorillas through contact with humans. Poachers are not such a problem for this particular population of gorillas, but animal traps set by locals are. They're meant to capture antelope, but gorillas can also get caught in them and die from their injuries or exposure.

Once we entered the forest, our bright day turned dark thanks to the thick stands of bamboo and tangle of vines all around us. As we walked up the trail, Eugene started to growl. It was a warm, rumbly vocalization that he uses to keep from startling the gorillas. And then, about 20 minutes after we entered the forest, we saw our first gorilla.

To hear what happened next, listen to the story by clicking on the audio link above.

Rebecca Davis, a producer with NPR's Science Desk, was in in Rwanda on a trip arranged by the International Reporting Project.