Accessibility links
White House Chef Sam Kass Plays Not My Job Kass is the first family's personal chef at the White House and an important player in Michelle Obama's healthful food initiative. We've invited him to play a quiz about three things that are really, really bad for you. 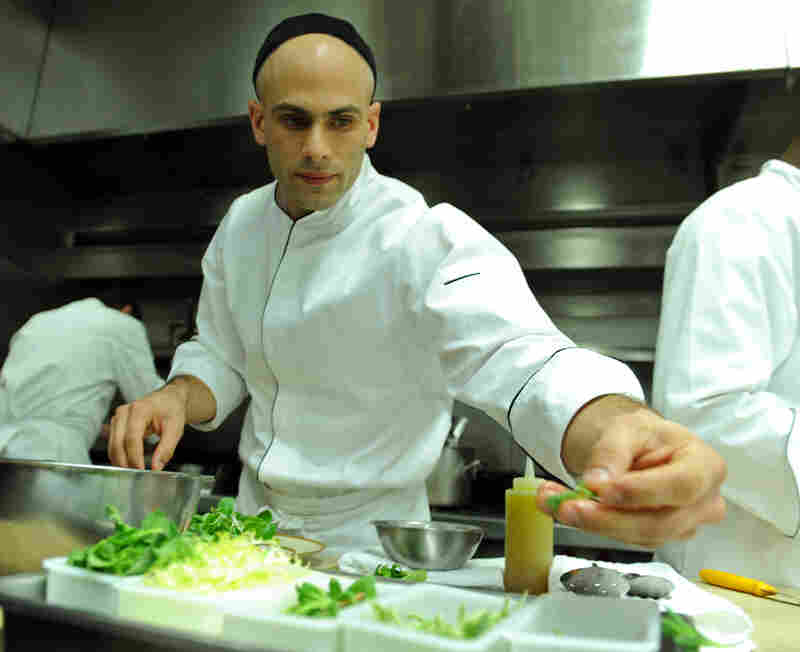 Sam Kass was working as a private chef in Chicago when one of his clients got a new job, so he moved with that client to Washington, D.C., where he now cooks in large building with an Oval Office, a rose garden ... and a tiny kitchen. He's the first family's personal chef and an important player in Michelle Obama's healthful food initiative.

And now the game where people who do important things take a break from that, and do something unimportant. So, Sam Kass was working as a private chef in Chicago when one of his clients got a new job, so he moved with that client to Washington, DC, where he now cooks in large building with an Oval Office, a rose garden, and a tiny little kitchen.

SAGAL: He is the first family's personal chef at the White House, and an important part of the First Lady's healthy food initiative. Sam Kass, welcome to WAIT WAIT...DON'T TELL ME! It's great to have you.

SAM KASS: Thank you so much.

SAGAL: Let me get the story right. You had been working in restaurants in Chicago. You started your own private chef business. And you were working for the Obamas when he was still a state senator. Is that right? Or not quite back that far?

KASS: No, I was helping out now the First Lady, during the campaign a little bit. And I was lucky enough to get the invitation to come here.

SAGAL: So, describe your duties at the White House then.

KASS: I have a couple roles at the White House. So I've been helping the First Lady on her Let's Move initiative, trying to ensure that our kids grow up healthy.

KASS: Yeah. Really important work for the future of our country. And that started with a garden on the south lawn.

KASS: So I've had the honor of helping her with that. And then in the evenings, I go to cook dinner.

MO ROCCA: Does it ever get a little bit boring cooking healthy food?

KASS: Not if you get to cook out of that garden, it's always...

SAGAL: How much of the produce from the garden do you use?

KASS: Everything gets used. So every night I get to go down there. We grow year round, so I'm going down there nearly every day.

SAGAL: I never thought the day would come, especially in the early 21st century when the president of the United States' family dinner would depend on that day's harvest.

SAGAL: I just image the first lady going to the kids, "I'm sorry, there were locusts. Tonight, you go hungry."

ROCCA: Are there ever deer on the south lawn? That'd be kind of cool.

KASS: That's why we have Secret Service down there.

SAGAL: They got those guys...

SAGAL: ...in unconvincingly clean overalls talking into their sleeves going "we got a squirrel. We have a squirrel."

KASS: It works out pretty well for us.

ROCCA: But a lot of those agents are distracted sometimes.

O'ROURKE: That only happened once.

ROCCA: In the garden, only by the lady bugs.

SAGAL: So I imagine that whole issue of healthy food in the White House could be an issue. I mean, because obviously Mrs. Obama is a very, very big advocate for healthy eating. But she's got two young daughters. I have young daughters. Do they ever, like, knock on your door in the middle of the night going "Sam, give me a Pop-Tart?"

KASS: That's one of the many reasons I don't live in the White House.

ROCCA: I don't mean to be rude, but do you ever sometimes wish that you could cook for Governor Chris Christie?

ROCCA: I mean, you could do anything you wanted to. Like, it's zebra.

SAGAL: An entire one.

KASS: I'm not sure I have the skill set.

SAGAL: Really? No, probably not. I want you to confirm something I read once which is that despite what you may think, the president gets free boarding. We know that. But he has to pay or his family has to pay for his own food, if it's not like a state occasion or an official occasion. Like he pays for his kids' Rice Crispies, that's, like, his job.

SAGAL: And does that ever affect your choices? Like the president says, look, book royalties were down this year?

SAGAL: We need you to make a mock apple pie out of Ritz crackers. That's all we have.

KASS: We haven't quite gotten to that level.

SAGAL: It hasn't gotten to that point yet.

ROBERTS: You know how sometimes you're just in the mood for Chinese? Do they ever do takeout?

KASS: We don't do too much takeout.

SAGAL: He does pickup though? Because the president...

SAGAL: We all know the president will stop at some great place here, like burger joints or the chili dog place, right? It's always cheeseburgers, chili. That is both a wonderful publicity stunt, a great way to meet the people and a cry for help it seems.

KASS: Hey, look, the way we look at this is if, you know, you eat balanced diets, you know the first lady teaches the kids, then you go out and have a burger, it's great. So it just turns out that, you know, most of the time when they're going out, then they're going to get burgers.

O'ROURKE: You're from Chicago, right?

O'ROURKE: OK, I partly grew up in Chicago and I just wanted to confirm this. The hot Italian beef sandwich is a vegetable, right?

KASS: Classic. So is the Harold's Chicken and Ribs N Bibs.

SAGAL: We wanted to talk a little bit, of course, about the healthy foods initiative that you've been working on with the first lady. It's a tough challenge trying to get Americans to eat better.

SAGAL: Because there's a lot of forces convincing them not to.

KASS: Well, you know, we're facing as a country some really serious challenges. The First Lady has worked very hard to unite the country around the health and wellbeing of kids and of families. And it's going to take all of us, parents and teachers, business leaders, doctors, thinking, stepping back, "what can I do in my role to help improve the health and wellbeing of our kids."

ROCCA: No, I mean it's tough love, but to get in shape.

KASS: I want to be clear; we are not endorsing that policy.

KASS: Not at all.

SAGAL: Well, Sam Kass, we are delighted that you came to join us here today. And we have invited you here to play a game we're calling?

SAGAL: So you're all professional about doing things that are good for you. We are not.

SAGAL: We're going to ask you three questions about things that are really quite bad for you. Answer two questions correctly, you'll win our prize for one of our listeners: Carl's voice on their home answering machine. Ready to play?

SAGAL: All right, Carl, who is Sam Kass playing for?

SAGAL: All right. Here's your first question. Early in the 20th century, a doctor named John Brinkley became nationally famous and quite rich because of his revolutionary medical treatment. What was it? A: Solving people's fear of death by locking them in a coffin for two days? B: Solving their impotence or lack of virility by transplanting goat gonads into them? Or C: Solving obesity by sewing his patients' mouths shut?

KASS: God, I hope none of those are true.

SAGAL: One of them is.

KASS: I mean if it's B, did you hear what he said what B was?

SAGAL: They're all nodding excitedly.

SAGAL: Some people out there are baaing.

SAGAL: So you're going to go with B, transplanting goat gonads?

SAGAL: Well, are you going to pick it or no?

SAGAL: It's true. That's what he did.

SAGAL: Dr. Brinkley, known as the Gland Doctor. He charged upwards of $700 for his goat gonad treatment, which he did thousands of times before the authorities finally stopped him.

KASS: That's one of the worst things I've ever heard of.

SAGAL: It's a pretty bad thing, but he did it for a long time.

KASS: OK. But didn't the next person talk to the person before and say how'd that work?

KASS: I mean, wouldn't you ask?

ROBERTS: What were they...

SAGAL: No, people were like, I won't check it out; it sounds good.

ROBERTS: What were they supposed to do?

SAGAL: It was supposed to increase...

SAGAL: All right. Next question: One thing people always say is bad for you is cracking your knuckles. Well one California scientist wanted to see if that was true. So how'd he do it? A: He had male subjects crack their knuckles every day and he measured how long it would be before their wives left them?

SAGAL: B: He cracked knuckles on one of his hands but not the other one, every day for 60 years, and then he evaluated if there was any difference in his hands? Or C: He painstakingly taught a dozen rhesus monkeys in his lab to crack their knuckles so he could test them?

SAGAL: You're going to go with B; he cracked his own knuckles on one hand for 60 years?

SAGAL: That's right. That's what he did.

SAGAL: Remarkable feat of scientific focus. And it turns out, there's no difference in his hands, so crack away people. All right, last question; let's see if you can go perfect. As we all know, diets can be bad for you. Which of these was a real diet that people once tried to follow?

A: The Sleeping Beauty diet, where you're heavily sedated and you sleep off the pounds for several days? B: The K diet, where you only are allowed to eat foods beginning with the letter K? Or C: The Illusion Diet. For $200 a week, five obese actors will follow you everywhere and make you look thinner by comparison?

SAGAL: You're going to go with A, the Sleeping Beauty diet? You're right, that's what people would do.

SAGAL: If you're asleep, you don't eat. So why not sedate yourself into a coma for a couple of days. Apparently, that's one of the ways that fat Elvis tried to become skinny Elvis again.

SAGAL: Carl, how did Sam Kass do on our quiz?

KASELL: Sam had three correct answers, so he wins for Solomon Rakebock.

SAGAL: Another success. Sam Kass is the Assistant White House Chef and the senior policy adviser for healthy food initiatives. Sam Kass thank you so much for joining us here.

KASS: Thank you so much.

SAGAL: It was a great pleasure to have you.