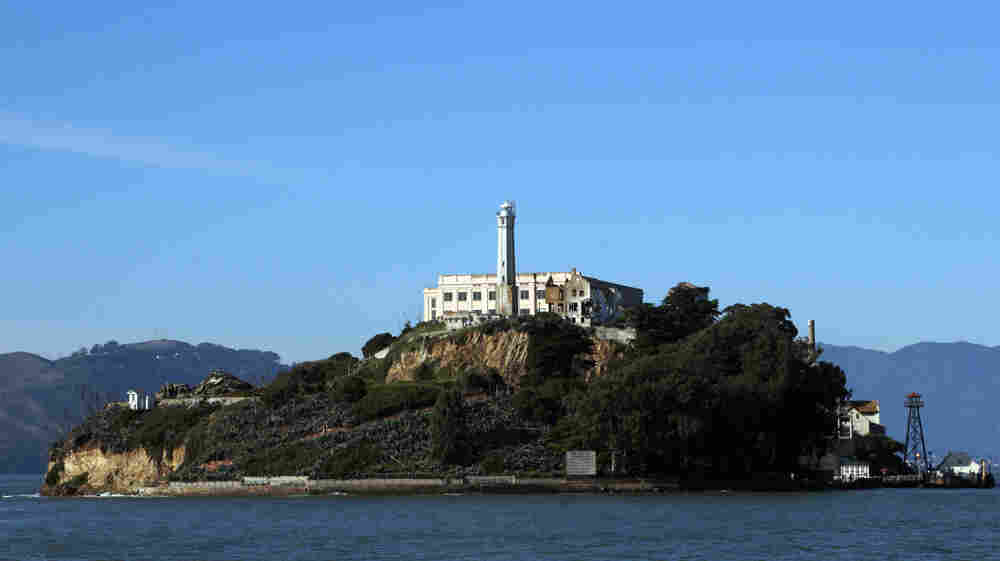 Sometimes referred to as "The Rock," Alcatraz Island on San Francisco Bay in California served as a lighthouse, then a military fortification, and then a federal prison until 1972, when it became a national recreation area. Now the island is open to tours. Gabriel Bouys/AFP/Getty Images hide caption 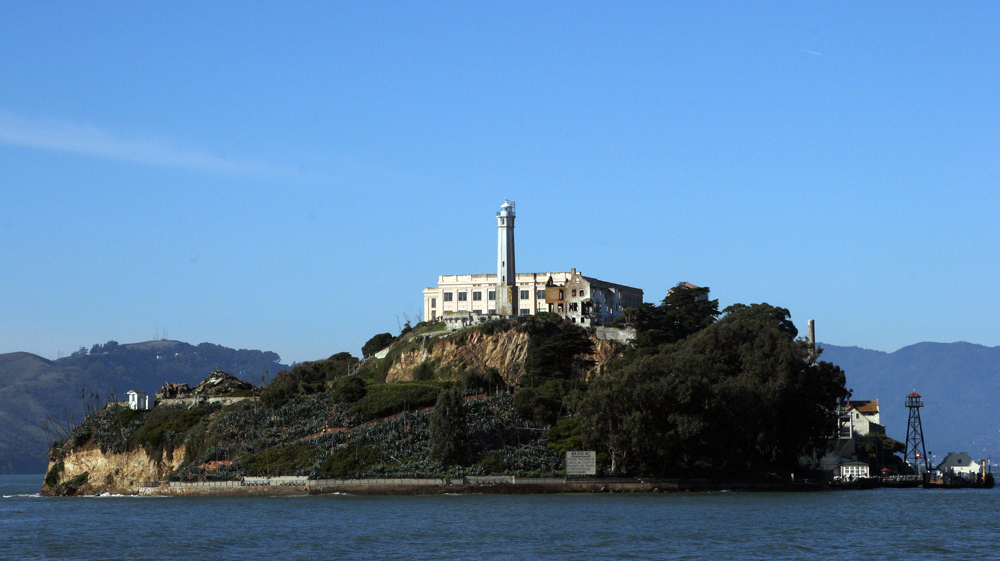 Sometimes referred to as "The Rock," Alcatraz Island on San Francisco Bay in California served as a lighthouse, then a military fortification, and then a federal prison until 1972, when it became a national recreation area. Now the island is open to tours.

Fifty years ago, three men set out into the frigid waters of the San Francisco Bay in a raft made out of raincoats. It was one of the most daring prison escapes in U.S. history.

As one newsreel put it: The spoon proved "mightier than the bars at supposedly escape-proof Alcatraz prison."

The men — Frank Morris and two brothers, John and Clarence Anglin — were never seen again. It was a brilliant plan, carried out with meticulous care and patience, but with such an unsatisfying ending. Did they make it? Or are they, as most people assume, at the bottom of the bay?

The legend has always held that if the men are alive, they will return to Alcatraz on the 50th anniversary of their breakout. There's little chance that's going to happen. But the anniversary is Monday, and I'm headed to the island to see if they show up. The U.S. Marshals say they will be there, too.

Three years ago, I went to Alcatraz for a story. A ranger there named John Cantwell took me up to the roof. He flung open the door, and there it was: the old air vent, a wide-open roof and a pipe hugging the building all the way to the bottom. The path to freedom, as Cantwell called it.

"So we've got three convicts climbing through an air vent. They pop the vent off — just kick it off — they're on the roof now and they run across the roof top trying not to make too much noise," he explained. "They slid down the pipe, hopped over that fence; they ran past those water tanks, then down that hillside to the east side of the island. Where the smokestack is where they basically entered the water."

It was such a terrific plan. What guard in the 1960s would think you could dig your way out of a maximum security prison with a spoon?

More On The Escape

Bill Long was the lieutenant in charge of the cell block that night, which he said was "totally normal" for him. I found out last week he died a couple years ago, but when I spoke to him in 2009, he said that in retrospect there were a couple weird things that happened on the shift before his. One guard said he thought he heard a hub cap rolling on the floor, which of course now brings to mind that air vent. And another guy said he could have sworn he heard footsteps.

But it didn't come to anything. Everyone was in their beds.

Morris and the Anglin brothers had created these life-like paper-mache heads, propped perfectly on their pillows.

Even Long didn't realize they were dummies until morning.

"The men went around the gallery to count and when they did, the man on B1, he didn't come back. He was hotfootin' it. He says, 'Bill, Bill, I got a guy up here who won't get up for count.' Well, I says, 'Sarge, I'll get him up!'" Long recalled. "So I went down to the cell, get down on my knee, put my head against the bar. I reach my left hand in through the bars and hit the pillow and hollered, 'Get up for count!' Bam! The head flopped off on the floor. ... Well, I thought right then that there's a head that fell off on the floor. They said I jumped four feet back from the bars. I mean, the most unexpected thing you could almost imagine."

The men had vanished.

Morris and the Anglins had made a boat and life vests out of raincoats. They even made glue to seal the seams. Days later, when one of the vests turned up on a beach in northern California, it was still seaworthy.

So where did they go?

U.S. Marshal Michael Dyke has been hunting for Morris and the Anglins for almost a decade. People call him all the time with sightings and theories about their neighbors.

"I don't get excited about leads, because if you get emotionally involved in leads it obscures your judgment," he says.

Even Dyke thinks the men are probably dead. But he's still looking.

"The marshals don't give up looking for anybody. Especially in fugitive investigations, if you've got a warrant we're never going to stop looking for you," he says.

The escape from Alcatraz is the marshal's sixth-oldest case. The other five are also prison escapes, from the 1950s. Dyke says the marshals need proof of death, or the fugitives have to turn 99 — a little tip if you end up on the run.

Morris and the Anglins are only in their mid-80s.

When asked if he thinks they'll show up, Dyke says, "I don't think so." And if they did? "I would arrest them."

The U.S. Marshals Service swears to never give up the search for Frank Morris and Clarence and John Anglin until they are either proclaimed dead or found alive.

It's hard to imagine they would come just to be handcuffed — or that someone would prosecute them if they did. Nonviolent bank robbers from half a century ago? Morris' first criminal charge was for stealing food after his parents either died or abandoned him. He was sent to prison when he was 14.

Inmates told investigators Morris was the mastermind. Such a well-conceived plan. Yet it failed to take into account one crucial thing: the midnight tides in the San Francisco Bay.

You can swim from Alcatraz to San Francisco, but you can't do it headed in the wrong direction, at night, in frigid temperatures, just as the snow melt from the Sierras is barreling through the Golden Gate Bridge. Several weeks after the men disappeared, a Norwegian shipping vessel reported seeing a body floating face down in the ocean just a few miles past the bridge, wearing a navy blue pea coat.

Nobody seems to know where the rumor started that the men would return on the 50th anniversary. But Monday, Dyke and even some of the Anglins' family members will take the ferry over to Alcatraz — and wait. Just in case.