Accessibility links
Help And Hope, From Soldiers, For Soldiers Like most members of the military returning from deployment, members of the Army National Guard's 182nd Infantry Regiment face a tough return to life back home. A program developed by the military offers assistance from job fairs to couples counseling, but it's often the last help soldiers get. 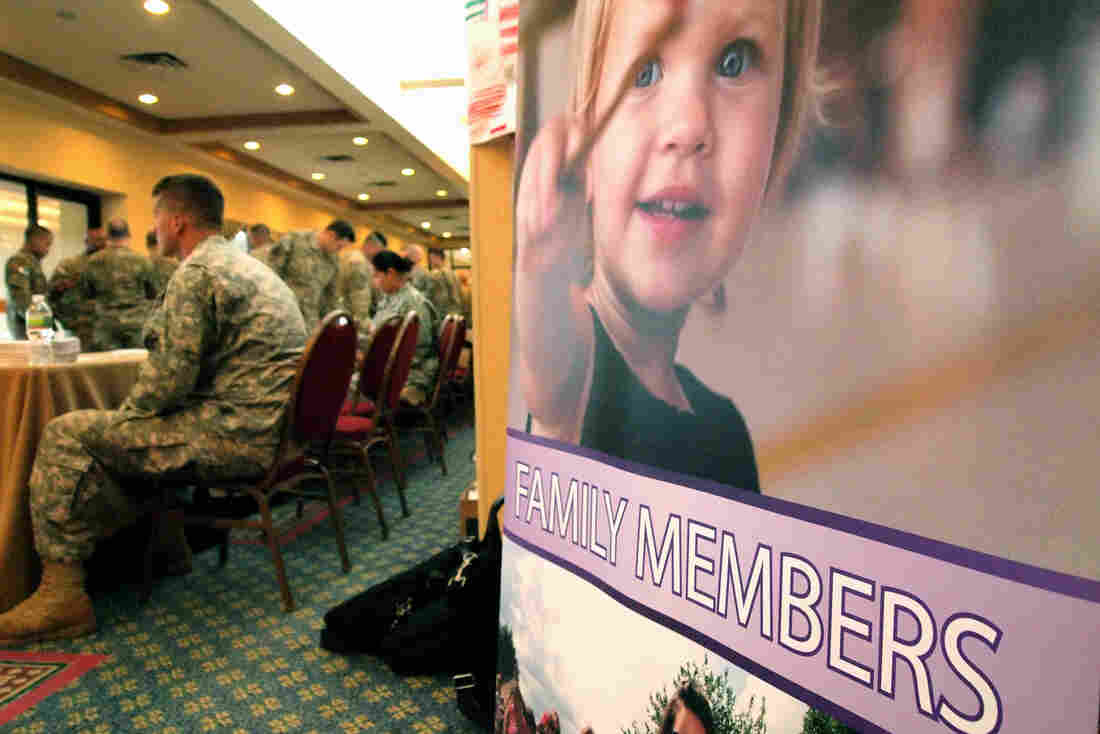 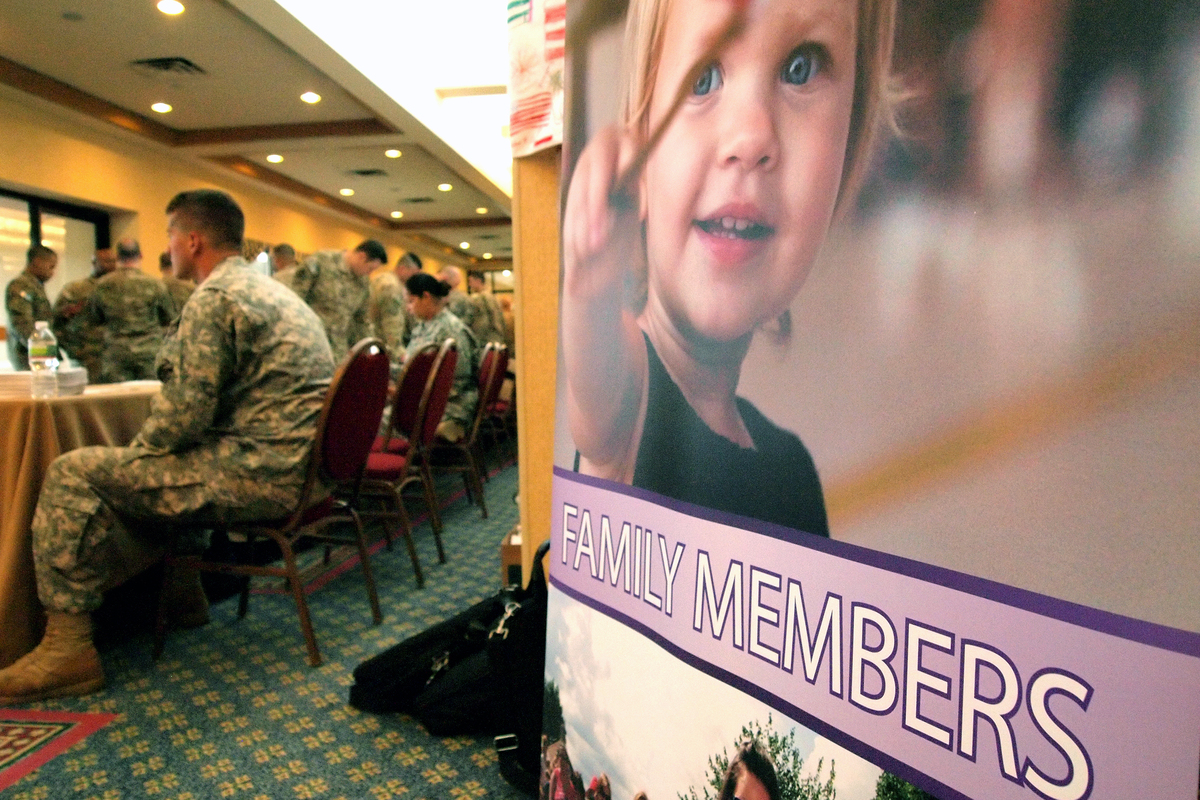 A recent Yellow Ribbon Reintegration Program event in Boston offered help for members of the 182nd Infantry Regiment of the Army National Guard as they transition back to being civilians.

The 182nd Infantry Regiment of the Army National Guard landed back in the U.S. last March after a yearlong deployment to Afghanistan.

After two months of leave, however, their official transition time is over and the deployment paychecks have stopped. It's now time to get back to regular life, and for the members from Massachusetts, that means a mandatory check-in with the unit's leadership.

From Soldier To Civilian

For most of the soldiers, it was the first time they've put on a uniform in months. Instead of a camp, however, they met at a hotel ballroom in Boston.

Some sat with families: wives, children and a few parents. Others cornered themselves off with their old squads. Units in the Army National Guard generally meet one weekend a month plus two weeks a year for training, but this weekend is different. This weekend it's a Yellow Ribbon event.

The military created the Yellow Ribbon Reintegration Program in 2008 as a way to help Guard and Reserve members make the transition from soldier to civilian.

"You've had some time off, [and] now you're ready to get back to the business of ... getting your life back in order and moving on post-deployment," says Maj. Michael Greene, who coordinates the Yellow Ribbon events for Massachusetts.

There are two big concerns facing returning guard members. First, there's financial stability. The National Guard is a part-time job, so these soldiers need other work to support themselves and their families.

The second issue is psychological. After leaving home for a war zone, these soldiers have to learn how to relate to their families and to live as civilians again. Guard officials say this is actually when things start to get hard — now that these troops have been home for a while and have had a chance to decompress.

The day before the Yellow Ribbon event, Spc. Brian Cannava prepped for a job interview at his home in the small town of Shirley, Mass. Cannava started looking for a job while deployed with the 182nd in Afghanistan. Now that he's home, he's going on interviews.

Unlike many of his fellow soldiers, Cannava has been frugal with his military pay, and he's saved up a financial cushion. So at this point, he thinks he can afford to be picky about what job he takes.

Cannava was interviewing for a position he heard about at a veterans job fair as a financial adviser, but he's not sure he even wants the job.

"I don't know why I'm going. I guess just to entertain the idea," Cannava said. "I guess that's why I'm not nervous."

Cannava knows he needs a job. He has 9-year-old son with diabetes, so there are medical bills to pay on top of basic living expenses. Yet there's a sense of apathy hanging over him, and it's hard to think about taking a desk job after being in a war zone.

"That's part of the reason I don't want to do a regular job like financial adviser," he said. "I don't get pumped up ... I haven't really been pumped up since I've been home."

After the interview, Cannava was a little more energized. He said he planned to go back, check out the office and see if they can sell him on working there.

In some ways, the job search is a helpful distraction from the culture shock of coming home. Cannava is separated from his son's mother and they share custody, so Cannava has set up an extra room for when his son sleeps over. But most of the time, he's alone.

"The first like, week or so, it was kind of awesome," he says. "[But] when you're by yourself for a longer period of time ... [you] kind of like, miss having people around. So, it's kind of lonely, I guess."

That's the other big pillar of the Yellow Ribbon program. Besides the financial issues, there's also the far more personal side of making this transition and helping the soldiers learn how to be back home again.

For some soldiers, the Yellow Ribbon event is just about ticking a box. Others take advantage of the resources offered, like free acupuncture, seminars on networking and even relationship counseling.

At this event, Dr. Justin Hill, a psychologist at the VA Boston Healthcare System in the Jamaica Plain neighborhood, led a therapy seminar for couples in a small conference room at the hotel. He stood in front of about a half-dozen couples. 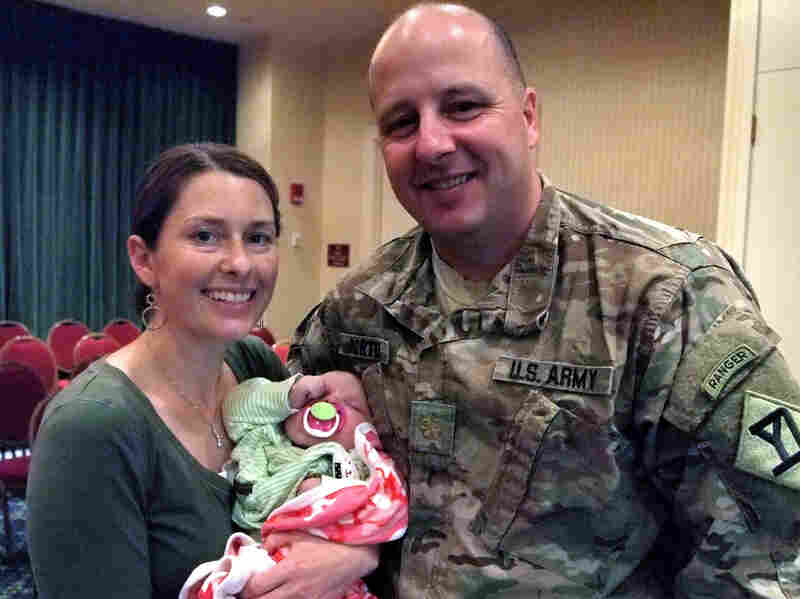 Maj. Matthew Porter, his wife, Jennifer, and their 3-month-old daughter attended the Yellow Ribbon event. They say the deployment strained their relationship, but they are working to keep their marriage healthy. Tom Dreisbach/NPR hide caption 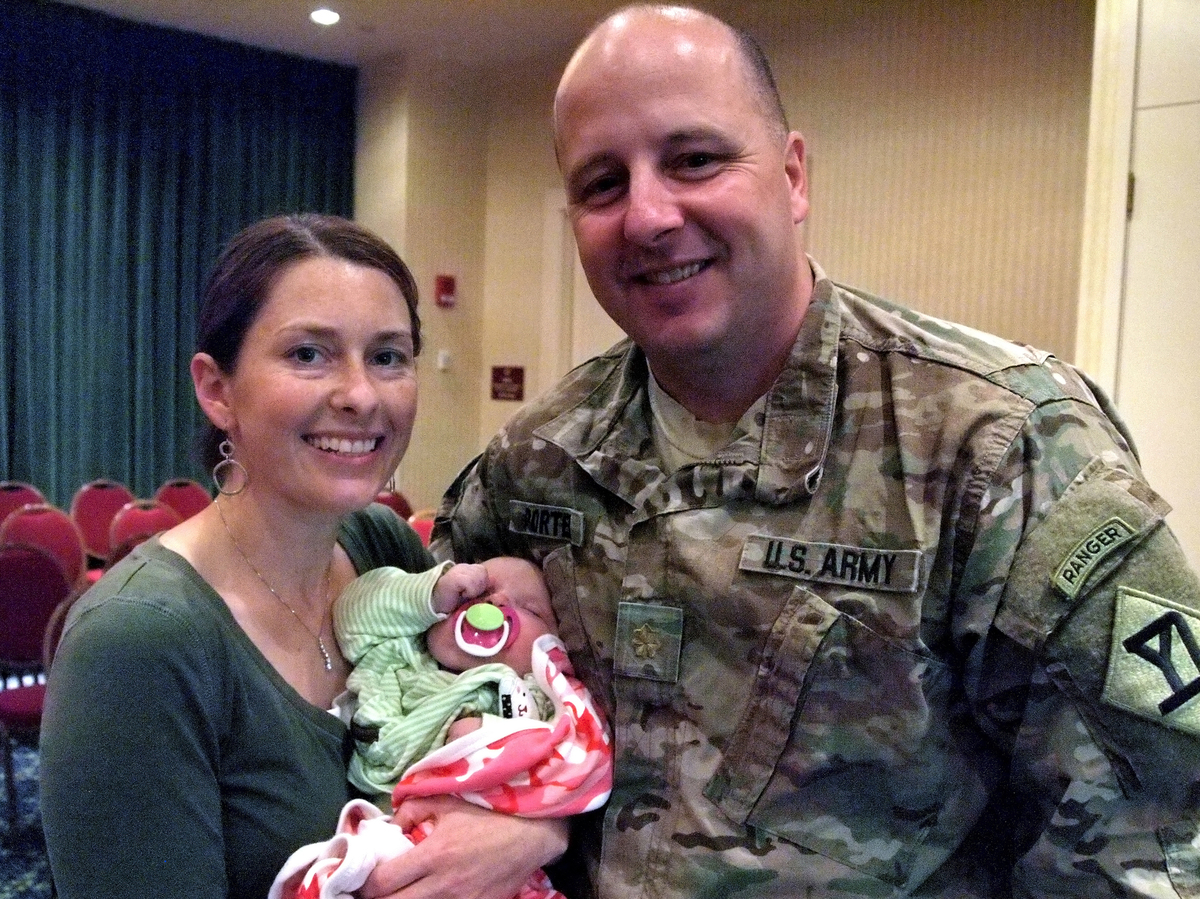 Maj. Matthew Porter, his wife, Jennifer, and their 3-month-old daughter attended the Yellow Ribbon event. They say the deployment strained their relationship, but they are working to keep their marriage healthy.

"We're not going to get too touchy-feely in here, we're going to be talking more about how to talk to one another and how to identify what feelings are actually going on," Hill said.

Maj. Matthew Porter attended the seminar with his wife, Jennifer, and their 3-month-old daughter. Some of the problems they face are universal, like communication.

"Her method of dealing with a fight is we'll fight about it a little bit, and then she goes into a silent treatment," Matthew said. "That angers me, because I want to work it out."

Some problems are directly linked to the deployment, Hill told them, including comparing the small problems of everyday life to being in a life-threatening situation like a war zone.

"That can be very invalidating to your significant other," he said.

Only a handful of couples decided to go to the seminar, so Porter and his wife are the exception. After the session, they say most families in the 182nd will end up grappling with their problems behind closed doors.

"It's hard," Jennifer Porter says. "You don't realize people are going through the same thing. It's more private."

The Porters are taking steps to keep their marriage healthy, but other families didn't survive the deployment.

When Sgt. Paul Cruwys went overseas, he was engaged and had a young son. The stress of the separation caused constant arguments between him and his fiancee, and when he came back, the fighting didn't stop.

"We just woke up one day and decided we should really [part], for the benefit of our son, not to fight around him," Cruwys says. "It wasn't working out, so we decided to call it quits. So it was like, 'What do I do now?'"

That's the question many soldiers are asking themselves. They can get some guidance at the Yellow Ribbon event, but after the weekend seminar, they're kind of on their own.

Greene says at least the soldiers at the event are getting some help.

The Guard is counting on informal bonds in the unit: unit members staying in touch and spouses or parents checking in with one another. The problem is that those informal links are about to get even more informal.

The 182nd that deployed to Afghanistan won't exist in the same way much longer. Some soldiers are leaving to join other units. Some are moving out of the state or dropping out of the military entirely.

As for Cannava, he didn't end up taking the financial adviser job. He's still keeping his options open. Part of him wants to renew his Army contract and just re-deploy.