Accessibility links
Before Deep Space, NASA Heads Deep Under Water NASA may have retired its shuttles, but it has its sights on sending astronauts deeper into space than ever before. The agency wants to set foot on asteroids, but the first step is a soggy one. 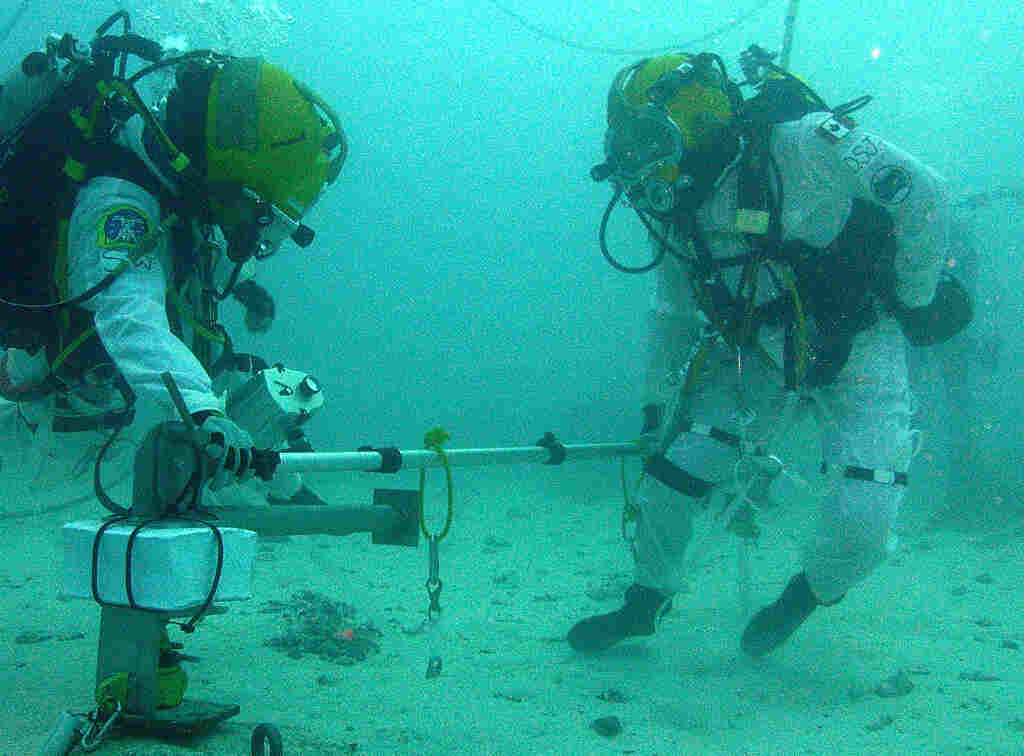 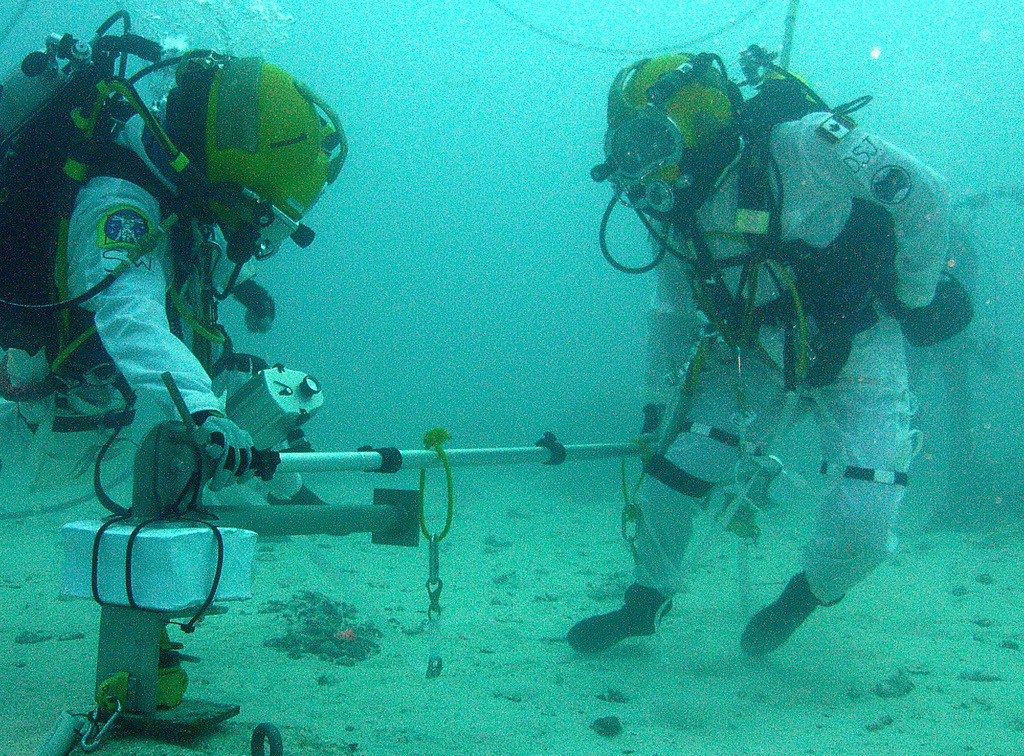 Astronauts Shannon Walker and David Saint-Jacques test a probe in the waters off Key Largo, Fla. Their research may help NASA set foot on an asteroid someday.

NASA may have retired its shuttles, but it has its sights on sending astronauts deeper into space than ever before.

These voyages are years away, but on Monday, astronauts are heading underwater to take part in a simulation that will help them figure out how they might explore one possible new destination: a near-Earth asteroid.

It'll be the space agency's 16th NEEMO expedition — NASA Extreme Environment Mission Operations — commanded by astronaut Dottie Metcalf-Lindenburger. She flew on one of the last space shuttle missions, and even helped prepare Atlantis for its final launch.

"It was a very bittersweet time," says Metcalf-Lindenburger, who wants to go into space again. In the meantime, she's commanding a four-person crew that's putting on scuba gear instead of space suits. She says we all have to move on.

"Like in all things. I just had my daughter finish up her last day of preschool before she goes off to kindergarten. We have to shut chapters and begin new chapters and we had to do that in the space program, too," Metcalf-Lindenburger says.

Her crew will spend two weeks working underwater, which is the best approximation on this planet of what it would be like to operate in the zero gravity of an asteroid.

Their base will be an underwater lab called Aquarius. It's about the size of a school bus and sits 60 feet under the surface a few miles off the coast of Key Largo, Fla.

Metcalf-Lindenburger says floating underwater is a lot like floating in space.

"Water is a nice way to free your body and get to explore a different way of movement," she says. "Since we're so stuck with walking here on Earth, it's nice to float around, flip around — just like in space."

How To Hammer Rocks In Space

Cornell University astronomer Steve Squyres is heading to Aquarius for the second time. His last NEEMO mission was cut short because of a hurricane.

He's thrilled to get another chance to help figure out what kinds of equipment might help people do research on an asteroid someday. Last time, Squyres and his crewmates strapped jet packs to their backs and had a blast zooming through the water.

"They were great for moving around," he says. "You'd see a rock outcrop 30 meters away, and you'd go flying over to it."

But they learned jet packs were terrible if you needed to stay still for any length of time, like say, if you want to take a sample from an asteroid.

"If you just do something as simple as hit a rock with a hammer, you're going to go flying off into space, so we've got to develop a whole new set of tricks and tools for operating on the surface of an asteroid," Squyres says.

This time, they're going to see whether mini submarines might allow them to hover in place.

"Imagine this little submarine with a 6-foot-long beam sticking off the front of it, and an astronaut on the front of that like a hood ornament," Squyres says.

NASA hopes to start sending astronauts and equipment to asteroids after 2025.

What's So Interesting About Asteroids?

You might wonder why anyone would want to go to an asteroid, but Squyres says there are many reasons.

Some asteroids are made of stuff like metals, that some people think could be harvested. Squyres says we need to learn all we can about asteroids to understand more about the origin of the solar system and to protect ourselves.

"Asteroids are a threat. Asteroids have hit the Earth before, we know that," he says. "Asteroids have caused mass extinctions. A small asteroid hitting the Earth wiped out the dinosaurs 65 million years ago — unless we as a species know how to prevent it."

Just sending robots to asteroids isn't enough, he says. That means a lot coming from Squyres, considering he's a robot guy. He's the principal investigator for the Mars Rover project.

"What our state-of-the-art robot on Mars can do in a day, you can do in about 30 seconds," he says.

Metcalf-Lindenburger predicts that as soon as NASA figures out how to get people to an asteroid, people will want to go there.

"Humans are explorers by nature," she says. "We've been doing it for a very, very long time."

When NASA finally does sends people deeper into space, she says, she hopes to be among them.