Accessibility links
Health Care Decision Hinges On A Crucial Clause Constitutional scholars know there's much more at stake in the Supreme Court's decision on the Obama health care overhaul than one election. The case could mark a major turning point in the way the Supreme Court interprets the Commerce Clause of the U.S. Constitution. 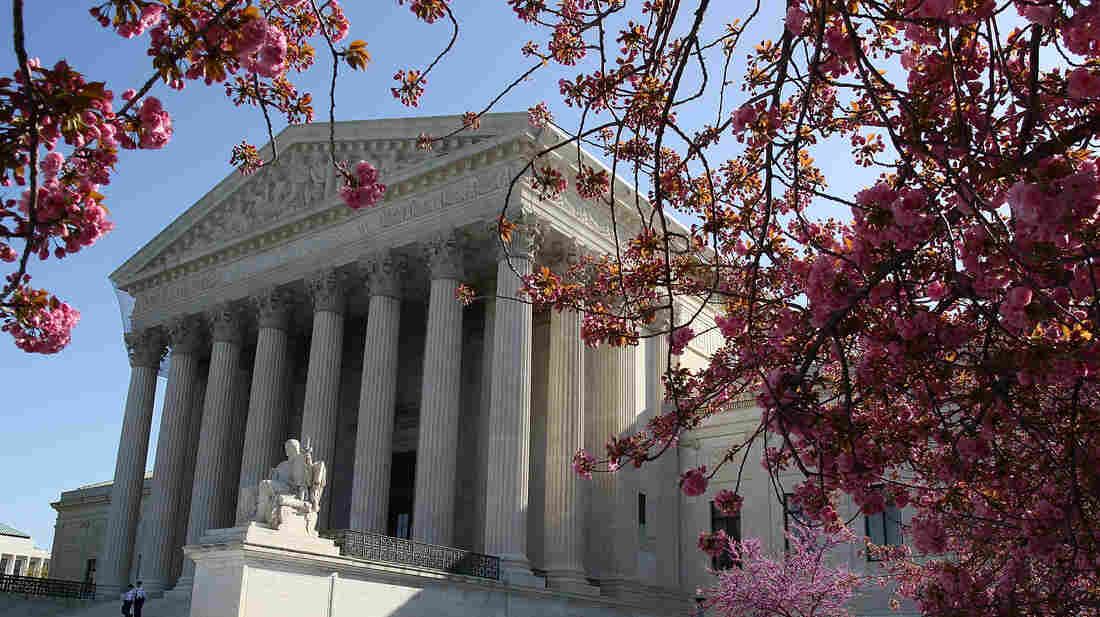 For more than 200 years, the Supreme Court has interpreted the meaning of the Commerce Clause of the Constitution. Its latest test is the case challenging the Obama health care law. Mark Wilson/Getty Images hide caption 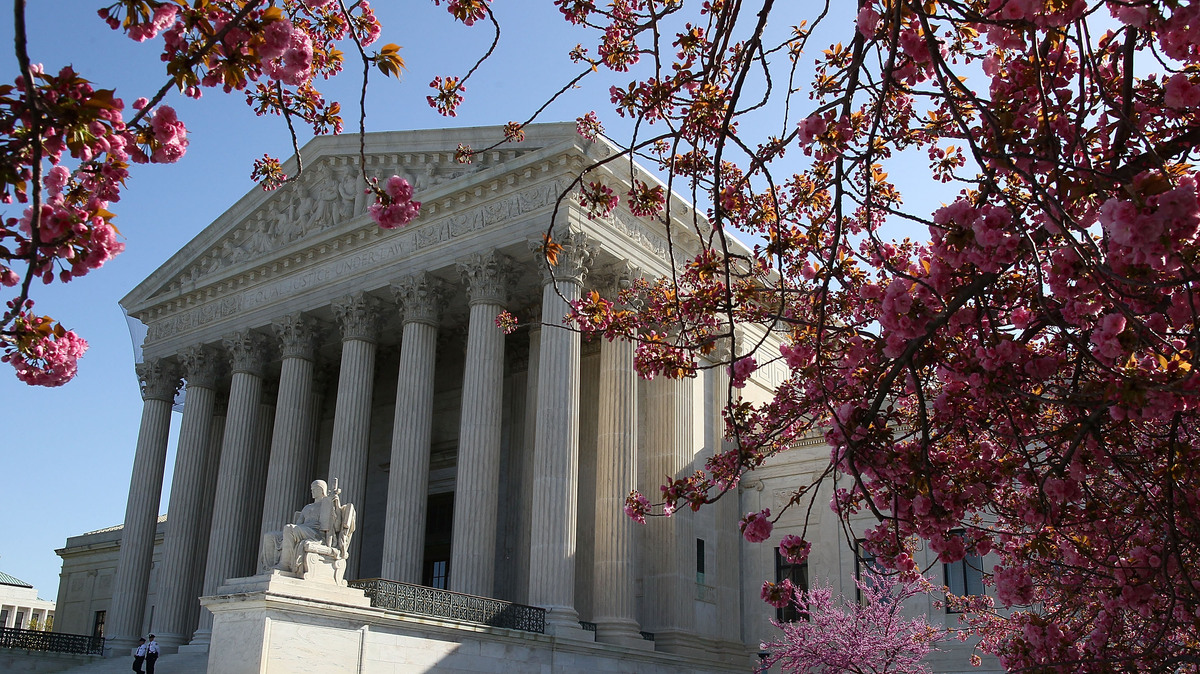 For more than 200 years, the Supreme Court has interpreted the meaning of the Commerce Clause of the Constitution. Its latest test is the case challenging the Obama health care law.

All of Washington is breathlessly awaiting the Supreme Court's imminent decision on the Obama health care overhaul. Rumors circulate almost daily that the decision is ready for release. As usual, those rumors are perpetrated by people who know nothing, but the decision is expected by the end of this month.

The near hysteria is partially about politics: Congressional Republicans hate the bill, and some see President Obama's chance at a second term hinged to the fate of the law. But constitutional scholars know there is much more at stake here than an individual election. Just how much is illustrated by the legal history of the Commerce Clause of the Constitution.

It gives Congress the power to "regulate commerce ... among the several States," and it authorizes Congress to "make all laws which shall be necessary and proper" for achieving that goal. The Founding Fathers' purpose was to put an end to the interstate rivalries that balkanized the country after the American Revolution. But the words of the Commerce Clause are pretty general, and it is the Supreme Court that for more than 200 years has interpreted what they mean.

The court's first major Commerce Clause decision came in the 1824. The great Chief Justice John Marshall, who was himself one of the Founding Fathers, wrote in Gibbons v. Ogden that the Commerce Clause gives Congress broad power to regulate commerce and that this power is mainly limited by the power of the people to deny their representatives re-election if they don't like what Congress does.

The decision infuriated the likes of Thomas Jefferson, who viewed federal power as far more limited under the Constitution, but the ruling stood as the guiding light on commerce questions for about 70 years.

The next landmark case came in 1895, during the rise of great national corporations and concentrations of wealth. When the U.S. government, using the antitrust law, sought to block the leading sugar refining company from acquiring 98 percent control of the industry, the company fought back and won. In U.S. v. E.C. Knight Co., the Supreme Court ruled that since sugar refining took place before shipments of the product crossed state lines, Congress was powerless to regulate the industry.

Federal appeals court Judge J. Harvie Wilkinson, author of a new book on constitutional theory, notes that this was a period of profound change in America. The country was being transformed by massive industrialization, coupled with changes in communication and transportation.

The question facing the court, Wilkinson explains, was whether the Congress could deal with these changes. Could it regulate them? "And the court gave a preliminary answer: No."

Over the next 40 years, the court used a variety of standards to determine which regulations were permissible and which were not. Did the activity have an indirect or direct effect on commerce? A substantial or insubstantial effect? Was it more like manufacturing or more like trading? The standards were vague and the court's decisions inconsistent, unpredictable and subjective.

At the same time, the court, citing the fundamental right to make private contracts, was striking down state legislation aimed at regulating wages, hours and working conditions. It was a one-two punch.

The court's hostility to regulation became even more aggressive at the height of the Great Depression, when Congress, at the behest of President Franklin Delano Roosevelt, enacted New Deal legislation to set rules for everything from banks to agriculture, all of which were on the brink of disaster.

Repeatedly, the court struck down legislation enacted by huge congressional majorities. "The conservative majority started with the proposition that laissez-faire economics was good and that any intrusion by the state or the federal government was necessarily suspect," says New York Law School professor James Simon, author of a book about the court and the New Deal.

"The conservative courts of that era really put their collective thumb on the scale on behalf of property at the expense" of the rights of workers, says Jeff Shesol, author of another book about that era.

The ultimate setback for the New Deal came in 1936, when the conservative court, by a 5-4 vote, struck down a new federal law designed to regulate wages, hours and working conditions in the coal mining industry. In Carter v. Carter Coal Co., the court said that coal production, like sugar refining, did not constitute commerce among the states and thus could not be regulated by the federal government.

That decision turned out to be Roosevelt's last major defeat at the court. Months later, after winning a landslide re-election, he announced what came to be known as his court-packing plan: He proposed to add six new justices to the court.

The announcement may have provoked the court into rethinking the confrontational path it had undertaken. After all, as Wilkinson observes, the New Deal had huge popular support, and the court, increasingly, did not. "The Supreme Court itself appeared to sense the gravity of the situation, and to back off," Wilkinson says.

Indeed, just two months later, with the switch of one vote, the justices this time upheld a critical piece of New Deal legislation regulating labor conditions in the steel industry.

Historians agree that the court in NLRB v. Jones & Laughlin Steel Corp. ushered in the modern Commerce Clause doctrine. After that, the court deferred to Congress on economic regulations almost entirely.

The high point of the new era was a 1942 case called Wickard v. Filburn, a challenge to the Agricultural Adjustment Act. The law was aimed at stabilizing agriculture prices, which were in free fall. It paid farmers not to grow certain crops on some of their land. A farmer named Roscoe Filburn went to court, claiming that Congress had exceeded its power when it tried to bar him from growing crops on his own land for his own use. The Supreme Court, however, ruled that if Filburn could exceed his growth allotment, so too could others, and in the aggregate, that activity would undermine the goal of stabilizing prices. Even an entirely local activity like Filburn's, the court held, may fall under Congress' reach "if it exerts a substantial economic effect on interstate commerce."

Filburn's case sealed the deal. No piece of economic regulatory legislation was struck down for the next half-century.

In 1995, that streak came to an end when the Supreme Court rejected a federal law that banned the possession of guns within 1,000 feet of a school. A five-justice majority in U.S. v. Lopez said that the statute was a bridge too far, because the law did not regulate any economic activity. A second case of this sort followed five years later, but in hindsight, neither did much to change the overall deference given to Congress on regulating the economy.

Now comes the Obama health care overhaul, known as the ACA, the Affordable Care Act, a law under full assault by the modern conservative movement. Some, like Georgetown Law Center professor Randy Barnett, the architect of the challenge, say openly that they believe many of the New Deal cases were wrongly decided.

"They are well-settled precedents and are not likely to be revisited in my lifetime," Barnett says. "But I do think that according to the original meaning of the Constitution, they were wrongly decided."

Barnett is similarly skeptical of some conservatives' insistence that judges defer to popularly elected legislatures. "I don't think the court should simply defer to what Congress wants, especially when the issue is the scope of Congress' own power," Barnett says.

Barnett argues that the health care law can be struck down without undoing 75 years of judicial precedent. "Nothing about existing Supreme Court doctrine needs to change for us to prevail in this case," he insists.

But his critics, including George Washington University law professor Jeff Rosen, contend that Barnett's claim is disingenuous, and that the real goal here is to achieve what has not been achievable even by conservative Republican presidents and Congresses: rolling back major economic regulation.

"Let's not pretend that this is just a modest case of applying existing precedents," Rosen says. "The question is: Are you going to reverse decades of judicial deference in economic matters?"

Other scholars agree that the ACA presents a watershed, a potential breaking point with the legal framework that has undergirded our modern economy. "The expansive understanding of the Commerce Clause has been the basis of minimum-wage legislation, of workplace safety legislation, of economic protections, and in fact of our civil rights laws," notes Shesol. "The conservative legal establishment has been very open about its interest in undoing the New Deal at the constitutional level," and "this would be the first great success of the movement."

Nonetheless, Shesol cautions that comparisons to the 1930s can be overblown. Roosevelt and his allies really believed that if they could not enact major reforms to deal with the Depression, "there would be a total economic collapse that would make the Depression look like a cakewalk, and that conditions would be paved for the rise of a dictator," Shesol explains. "They were watching what was happening in Europe, and they really believed that if they couldn't get these pieces of legislation through the Supreme Court, that the whole thing might come crashing down."

Then, as now, advocates on both sides thought the very survival of democracy was at stake.