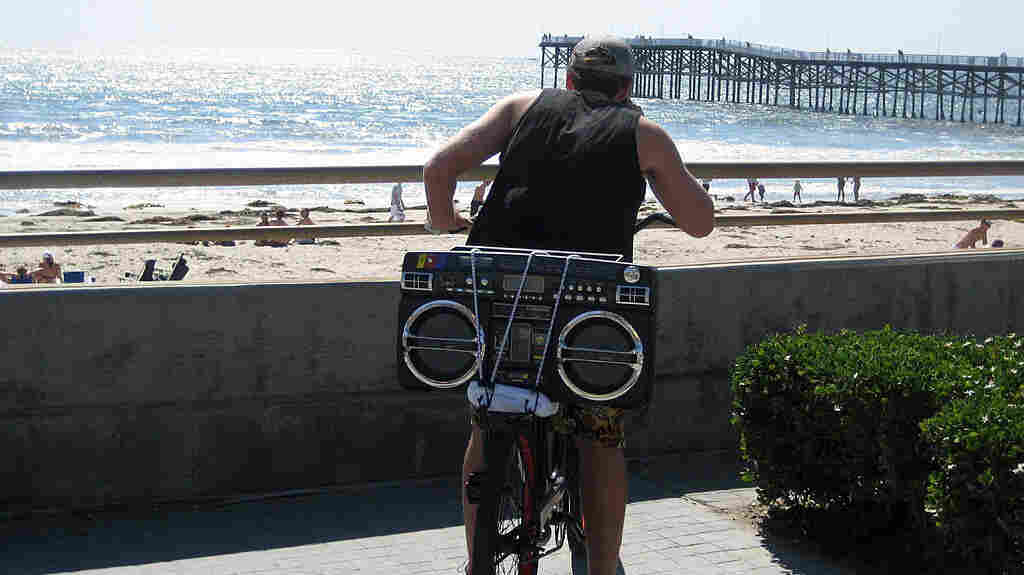 This mix is best enjoyed in warm weather, near a large body of water, with your old school boombox turned up to 11. Aaron R. Fulkerson/Flickr.com hide caption 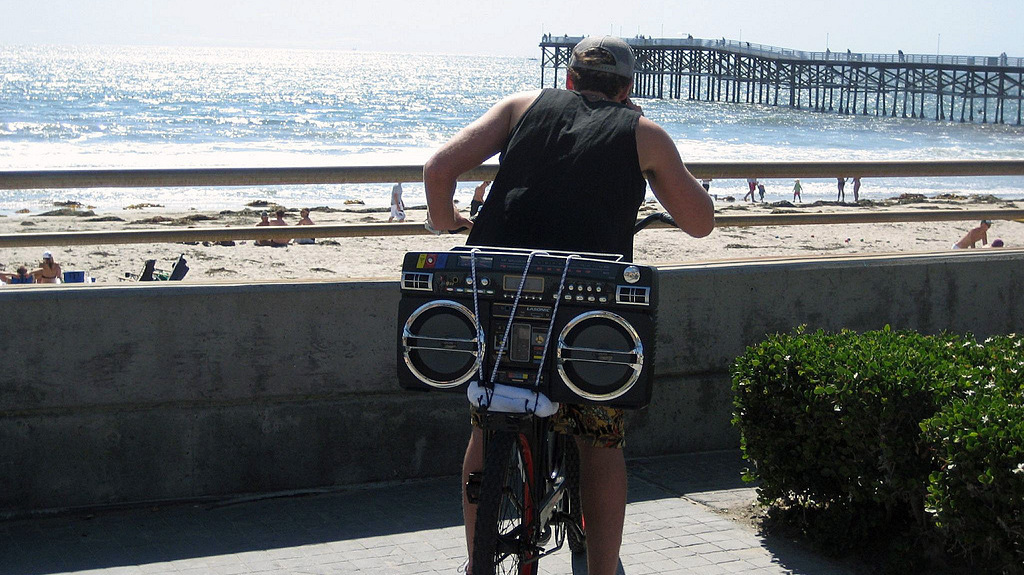 This mix is best enjoyed in warm weather, near a large body of water, with your old school boombox turned up to 11.

There's never just one theme running through the music of a given year, but through the first half of 2012, it's been hard to ignore the varieties of ecstasy referenced, performed and endorsed by the musicians behind many of our favorite songs.

Regardless of genre, it's there in the sound: the blast of tight harmony in "Gun Has No Trigger" by Dirty Projectors, the horns that drive the San Francisco Symphony's performance of John Adams' "Short Ride in a Fast Machine," the synthesized strings that underpin Carly Rae Jepsen's "Call Me Maybe." Or the lyrics: the swooning caress of Chairlift's "I Belong In Your Arms," the irrepressible ad libs in "Womyn" by Das Racist's Heems and the "You and me at the edge of the world" in Kishi Bashi's "Bright Whites." And it's there in the inability of many of our favorites to simply make it through a song before bursting with joy: the laugh at the end of Ana Tijoux's "Las Cosas Por Su Nombre," the unhinged "Whoo!" at the opening of Jack White's "Sixteen Saltines," the mind-erasing exuberance of the "I don't care! I love it!" in Icona Pop's "I Love It."

Of course, there's plenty more: drama and comedy, heartbreak and seduction, hope and regret. And plenty that didn't make our list, too (tell us what favorites of yours we missed in the comments). What more could we ask from six months of music? It's enough to give us fits of joy.

If you're reading this on a mobile device, you can listen to our mix of songs in the Radio section of NPR Music iOS apps.

Algodon Egipcio, "La Espina Del Cardenche"
The sampling of the traditional vocals of a northern Mexico style called cardenche mixed with electronica: the arrival of a Latin American artist from a generation that embraces the past while looking toward the future.

AlunaGeorge, "You Know You Like It"
This U.K. duo channels the brilliance of '90s-era TLC but infuses the R&B with its own brand of bass-heavy swagger.

Amadou & Mariam, "Dougou Badia"
Is American indie rock sounding more and more like West African blues and folk — or is it the other way around? The Malian duo finds a perfect partner in Santigold, who has spent her career mashing together unlikely influences and eluding classification.

Ana Tijoux, "Las Cosas Por Su Nombre"
Listening to Ana Tijoux mature and develop through her music is a glorious ride. She sparkles because her rapping sounds like what dancing feels like.

Beach House, "Myth"
The frosty keyboards and alluring vocals may not be a wild stylistic reinvention, but who cares? The shimmering, swoony melodies of "Myth" show evolution through precise refinements and many memorable hooks.

Best Coast, "The Only Place"
A chiming, charming, irresistible love song to California, "The Only Place" is perfect pop for those who romanticize both the comfort of home and the liberating effects of fun.

Brooklyn Rider, "String Quartet in c-sharp minor, Op. 131 (1st movement)"
Beethoven's moving and melancholy meditation is based on a melody that surges and then falters time and time again in a Sisyphean struggle. Here, it's played warmly, even beseechingly, by New York's favorite hometown string quartet.

Carly Rae Jepsen, "Call Me Maybe"
The most infectious earworm of 2012 — at least so far — "Call Me Maybe" doesn't ingratiate so much as it attacks, with a charming relentlessness that's almost violent.

Chairlift, "I Belong In Your Arms"
A pop daydream sick with the breathless excitement of falling in love, with words so silly ("banana split" as an evident term of endearment), they could only come from googly-eyed infatuation.

fun., "We Are Young"
Chart-topper or not: No matter your age, if you haven't shouted along to this chorus — or had it stuck in your head for most of this year — there's a chance that you're a robot.

Gregory Porter, "Be Good (Lion's Song)"
A voice like Detroit 1960-whatever, an outlook from Bed-Stuy 2012 and songwriting chops with a certain timeless pathos of frustration.

Icona Pop, "I Love It"
As charming as being shouted at by two impossibly beautiful Swedish women while dive-bombing synths and just-hit-whatever's-around beats mimic the most joyfully cathartic car crash/breakup/summer day ever can be. Which is, you know, pretty charming.

Jenny Scheinman, "A Ride With Polly Jean"
A most versatile violinist imagines a road trip with PJ Harvey as a broad, wide-shouldered groove. (Also, someone make this happen, please!)

Kip Moore, "Everything But You"
Yes, that's the guitar riff from "Sweet Jane" you hear in this country stomper about a lonely tropical paradise.

Kishi Bashi, "Bright Whites"
An infectiously joyful one-man symphony of violins and voices inventively looped to create overlapping melodies that flutter like butterflies inside your chest.

Lost In The Trees, "Neither Here Nor There"
No need for a pilot's license — propulsive percussion fuels Ari Picker and company's journey through wispy clouds of strings.

Luke James, "I Want You"
A classic-soul newcomer goes to the moon and back on the wings of his falsetto in this Danja-produced seduction.

M.I.A., "Bad Girls"
This is M.I.A. doing what she does best — twisting stereotypes and trashing social graces over an insanely catchy and scattered beat.

Meek Mill, "Amen" feat. Drake and Jeremih
Philadelphia rapper lures the guys who made "Marvin's Room" and "Birthday Sex" into church with a stabby organ chord progression and a shout-along hook fit for all of us on permanent traveler's dispensation.

The Men, "Open Your Heart"
A hardcore punk basher, a grungy mosh pit banger and a blustery riff fest that fits perfectly right in alongside all those bands you wish you could've seen in the '80s and '90s, you know, before you were born.

Miguel, "Gravity"
This California crooner is turning out to be one of R&B's hottest young auteurs; float with him in this bedroom delight.

Nas, "The Don"
"20 years in this game, lookin' 17," crows Nasir Jones, sidestepping the question of how to age gracefully in hip-hop. In a genre where a 38-year-old counts as an elder statesman, Nas survived by finding ever grander things to be surly about (e.g., "F---- sadness").

Now, Now, "Thread"
A breakup metaphor for the ages, in which raw emotions become dangling threads begging to be pulled.

Perfume Genius, "Hood"
An honest, churning love ballad from the point of view of an unapologetic bad boy. "Hood" is a sweetly half-hearted pledge to be true from one of the most compelling new singer/songwriters working today.

Regina Spektor, "All The Rowboats"
The singer-songwriter's powerful piano work forms the tide in this daydream about a museum whose works come alive.

Robert Glasper Experiment, "Afro-Blue" feat. Erykah Badu
What would the great Afro-Cuban percussionist Mongo Santamaria — who wrote this tune in 1959 — have thought of this new version by Robert Glasper and Erykah Badu? Proof, once again, that a well written song is the perfect palette for the adventurous spirit.

Rufus Wainwright, "Montauk"
A song for Wainwright's baby daughter Viva, "Montauk" is warm and universal in its realism, as the singer hopes for a distant future in which Viva still wants to see her parents when they're old.

Schoolboy Q, "Blessed" feat. Kendrick Lamar
A haunting, stuttering lullaby that's like eavesdropping on old friends pouring out their hearts to each other and dropping tears in their beers.

San Francisco Symphony, "Short Ride In A Fast Machine"
Composer John Adams at his most brilliant and buoyant — five minutes of exuberant joy, perfectly distilled. And check out those horns!

Shearwater, "You As You Were"
Jonathan Meiburg often sings of humanity's place in nature, but "You As You Were" makes that tension visceral: Beauty, majesty and rage converge as the song accelerates, while Meiburg dreams of chucking modern life altogether.

Sinead O'Connor, "The Wolf Is Getting Married"
Pure joy and a rolling drumbeat lift up this ballad of liberating love from one of rock's greatest voices.

Sleigh Bells, "Born To Lose"
A brutally frank chant for the suicidal, "Born To Lose" rattles like a machine gun, launches into a bombastic guitar riff and taunts with lyrics that tease between sweet and vicious.

St. Vincent, "Grot"
A seething Annie Clark shines a light on her dark side, eschewing sweetly orchestrated pop for ghostly echoes, teeth-gnashing guitar distortion and a powerful growl that will scare your nightmares away.

Tanlines, "All Of Me"
The year's most wistful dance song has a solemn message: When things get real, it pays to say what you mean.

Todd Terje, "Inspector Norse"
An instant classic rooted in disco, all funked up with new school production that begs for boogie shoes.

Usher, "Climax"
The Diplo production and Nico Muhly strings make it fancy, but the singer's swooning, dramatic reading opens up the heart of this tragic breakup ballad.

Waxahatchee, "Be Good"
Part-time punk Katie Crutchfield pens a deceptively simple song about the most complex of relationships: friends with benefits.