Accessibility links
After Libya's War, Acts Of Vengeance The rebels of Misrata earned a reputation as some of the toughest fighters in the battle to oust Moammar Gadhafi last year. What the rebels did after Gadhafi's was gone is not nearly so well known.

NPR Morning Edition host Steve Inskeep is taking a Revolutionary Road Trip across North Africa to see how the countries that staged revolutions last year are remaking themselves. Steve and his team are traveling some 2,000 miles from Tunisia's ancient city of Carthage, across the deserts of Libya and on to Egypt's megacity of Cairo. Near the Libyan coastal city of Misrata, he looks at violence that took place after the revolution.

I was talking with the newly elected head of the local council in Misrata, Libya, when he made a passing remark about the disturbed minds of his people.

I wanted to know more. "Do you think," I asked the councilman, Yusuf bin Yusuf, "that so many years under such a dictator affected the minds of Libyans?"

He answered immediately. "Gadhafi's regime has ended, but there is a small Gadhafi in everyone's brain."

It was hard to know if bin Yusuf found any irony in the statement. His city suffered cruelly at the hands of Moammar Gadhafi's troops. Gadhafi had famously promised to hunt down protesters against his rule "street by street, house by house, alley by alley," and he almost made good on that threat when his forces besieged Misrata.

But when his forces were driven away, it was the Misrata rebels who moved into a neighboring town accused of supporting Gadhafi, and destroyed it completely. Street by street, house by house, alley by alley.

Months after the war, tens of thousands of people remain homeless, with an uncertain future. The refugees are overwhelmingly black, referred to by their tormentors as "slaves."

Misrata's attacks on the people of Tawargha are so severe that the United Nations has labeled them "war crimes."

Misrata's destruction of Tawargha is not an easy story to tell, because Misrata residents fought and died to overthrow a dictator. In Misrata, you see burned and blasted buildings from last year's fighting. Very little has been repaired.

The city has created the Misrata War Museum, which includes some of the trophies of victory, ranging from Gadhafi's green chair to weapons captured from Gadhafi's forces. 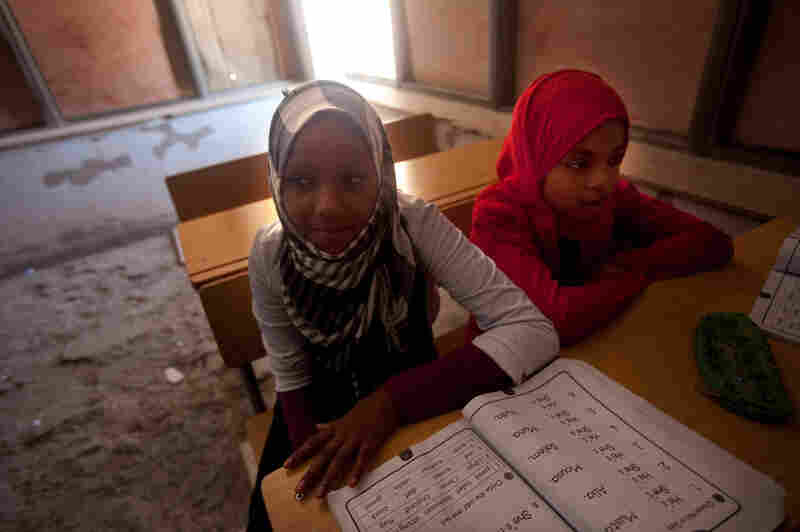 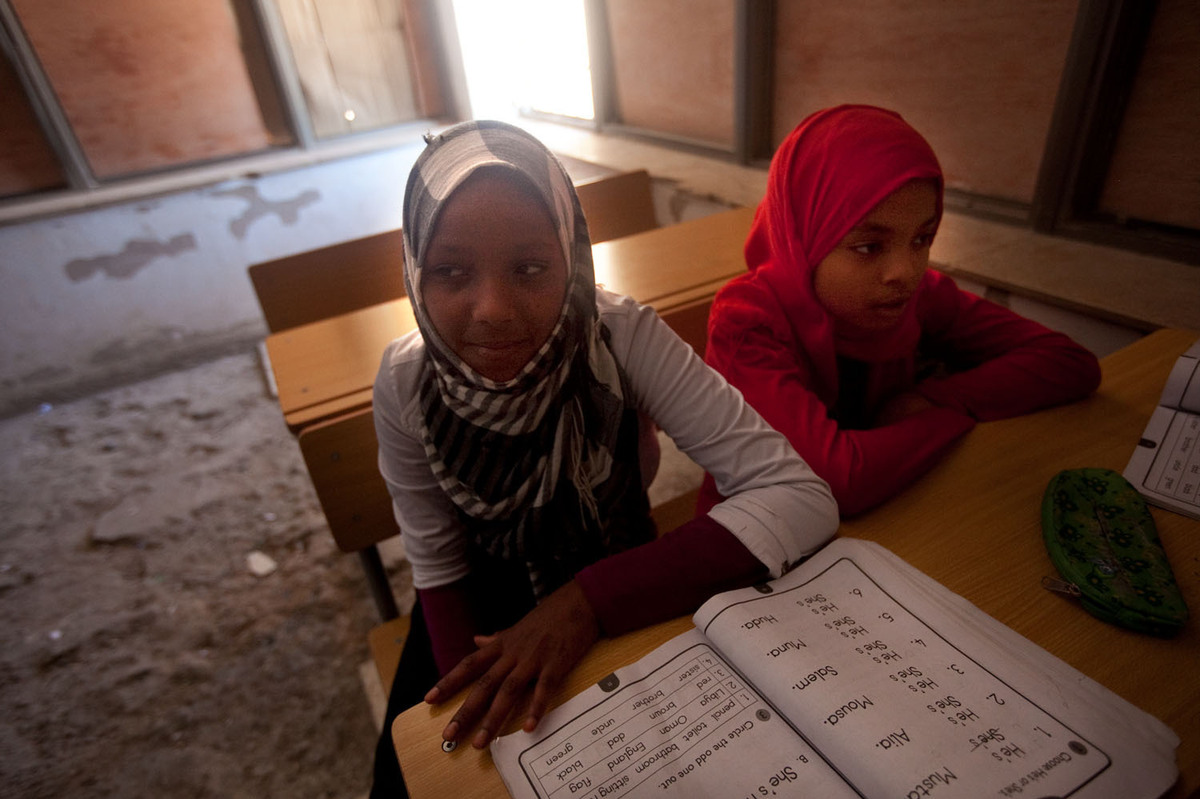 An English class in the Tawargha refugee camp. Students here are studying a new history textbook that makes almost no mention of Gadhafi.

Yet after the gunmen of Misrata helped to win the war, they staged their act of retribution in Tawargha.

Misrata leaders are not apologetic, as we learned when we had coffee with a businessman and political leader from the city. We found him in an upscale coffee shop in Tripoli.

Mohammed Ben Ras Ali has lived his entire life in Misrata and was present during the siege of his hometown, which lasted four months.

"They have tortured and killed and displaced, and burned fields and houses, and they have committed the ultimate sin in our culture and our religion, which is rape, and all coming from supposedly a good neighbor," he says.

Asked if those neighbors should be allowed to return, he says: "Not in my lifetime, I don't think. And this is coming from somebody who is very moderate, I would say."

There's one more fact about the town that was destroyed. In this overwhelmingly Arab nation, most of Tawargha's population was black.

And Misrata residents have made an explosive charge: that this city of some 30,000 black people rose up as one, marched into Misrata and raped Misrata women.

Though the U.N. Human Rights Council has found little evidence of this claim, it was used to justify the destruction of a town.

Driving south from Misrata, the first thing you see of Tawargha is a cluster of apartment buildings. It looks like they were used for artillery practice.

Then you arrive in the neighborhood beyond the buildings.

We felt like we were seeing a lost civilization. There were satellite dishes, burned out shells of cars still in the parking spaces. The destruction goes as far as we could see in every direction. Schools are empty, piles of trash are in the streets, and there were no signs of other people.

That's exactly the way officials from Misrata want their neighboring town to be.

We visited Yusuf bin Yusuf, the head of Misrata's newly elected city council, and asked about the possibility of reconciliation.

He adds that he doubts Tawarghans had the rights to their land anyway. An old story says the Tawarghans came here long ago as escaped slaves.

A Place Destroyed After The Revolution

Misrata leaders say this destruction is justified, given what they suffered, though they've struggled to prove it.

Bin Yusuf makes a sweeping claim against the people of Tawargha. He says the people volunteered — all ages, he says, from old men and women to kids — to come to loot Misrata and sexually assault the inhabitants.

Asked if he can provide a list of victims, Yusuf says that's impossible. In Arab culture, a list would shame the women involved, he says. 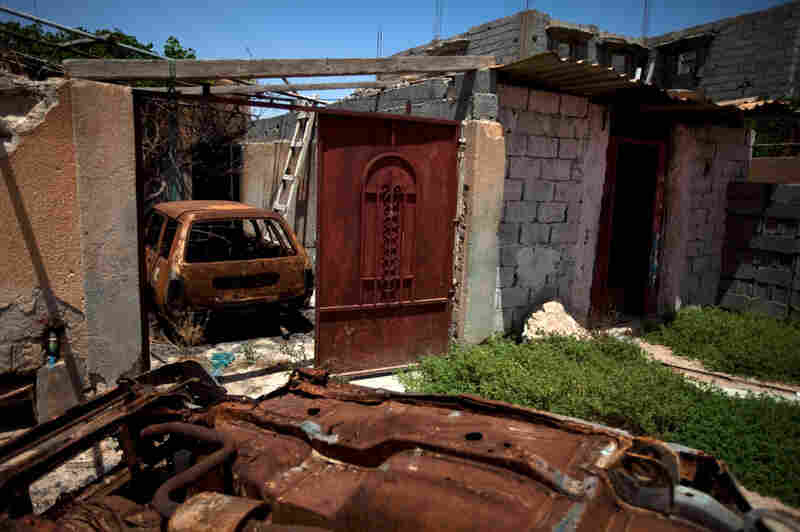 A destroyed home in Tawargha, south of Misrata. Residents have not returned home for fear of death. Misratans have burned every single home in the area and destroyed the town's infrastructure. John W. Poole/NPR hide caption 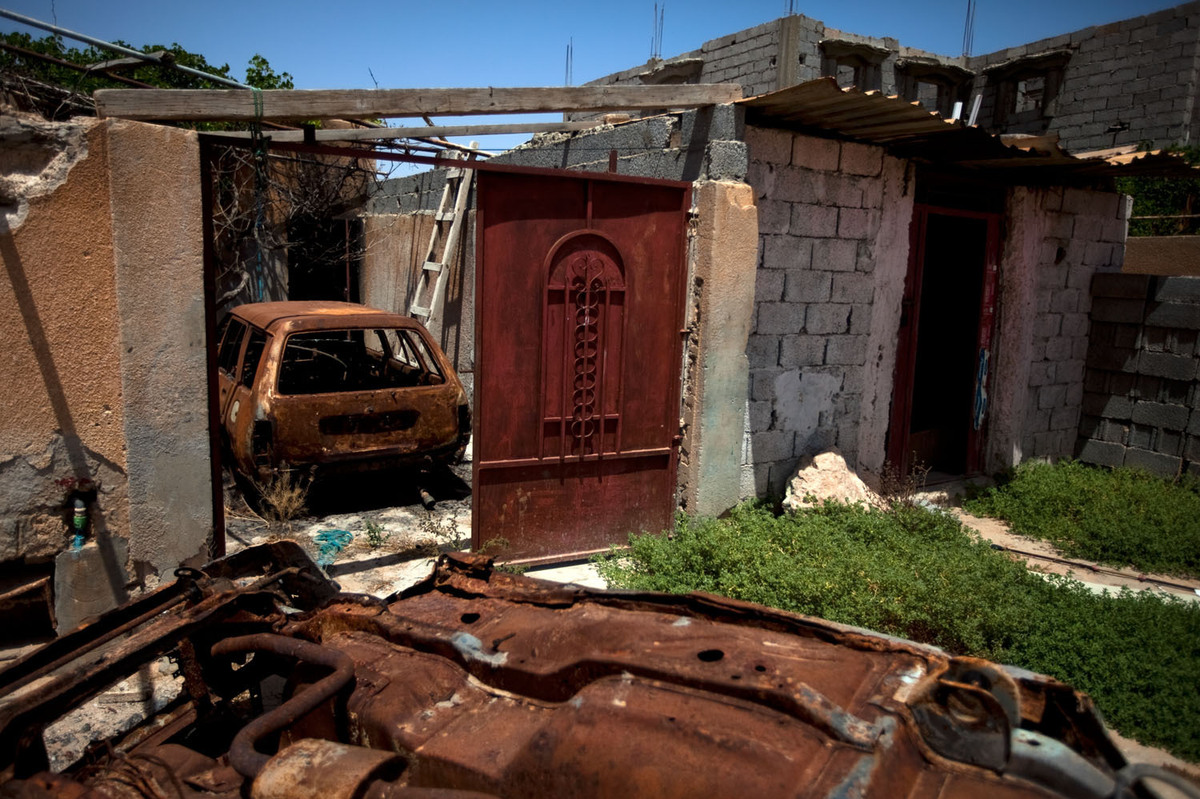 A destroyed home in Tawargha, south of Misrata. Residents have not returned home for fear of death. Misratans have burned every single home in the area and destroyed the town's infrastructure.

In a report in March, a U.N. commission of inquiry found no evidence of systematic sexual assault on civilians.

Investigators did find evidence that Tawarghans, the supposed perpetrators, were killed, tortured or driven from their town.

If you want to find the black men, women and children who were accused of these crimes, you have to travel hundreds of miles, to one of several camps where they stay — like a cavernous room inside the Libyan Naval Academy in Tripoli, where a group of kids were playing soccer indoors.

About 2,400 people set up homes inside vacant classrooms.

Down the hall from the kids' soccer game, we met Nurdeen Ramadan, a father of eight. He says his entire city did not commit atrocities, and also, incidentally, they're not all descendants of slaves.

"Actually, we are Libyans; we came here before everybody else," he says.

He says there were black people in Tawargha because this is Africa, connected for centuries to trade routes in the south.

Ramadan acknowledges that some of his neighbors supported Gadhafi. Gadhafi's troops passed out rifles to civilians who joined the assault on Misrata.

"In that time, you know, some people did foolish things. That's why now they think all Tawarghan people did so," he says. "Actually, we didn't do that."

Ramadan was a geologist for a state-owned oil company, though he now spends all his days in this camp. He says it's not safe to go back to work.

"If I go through the airports, they catch me, Misrata people catch me, any Tawarghan people," he says. "We are very easy to recognize because I am black. They catch any black people and they say, 'Who are you?' "

Once the refugees staged a protest march outside this camp, and refugees contend gunmen opened fire on them.

NPR Music features some of the music Morning Edition host Steve Inskeep is hearing along his travels through Tunisia, Libya and Egypt — in cafes, clubs and on local radio stations.

Refugees Want To Go Back

The refugees say they want to go home, though there's less and less to return to.

The city has been vacant long enough that bushes are beginning to grow in the streets. At the gate of what looks like it was an elegant house, there's a tree with red flowers, just about the only living thing left in this town because house after house has been burned out.

On other streets, graffiti is spray-painted in Arabic: "Don't buy a slave unless you also buy a stick."

[The people of Misrata] "are slave-masters of Tawargha."

On the road back to Misrata, we spotted another bit of graffiti in English, apparently left over from the war, when the people besieged in Misrata were seen as heroes before the world.

That graffiti reads, "We want freedom and justice. Nothing more."